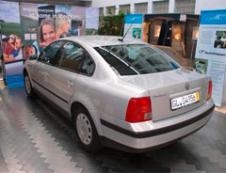 The ESV (European Show Vehicle) from Johnson Controls demonstrated in 1998 how automobile travel can be made even more pleasant in the future. The main emphasis was on multifunctional on-board systems. All features were fully integrated into the designs and identities conceived by the automobile manufacturers.

From the outside, the European Show Vehicle looked pretty much like a standard VW Passat. But a look inside revealed numerous technical innovations and indications of what the interior of automobiles might look like in the future. Engineers and designers from Johnson Controls had given their creativity free rein to demonstrate ideas which will shape automotive interiors in the future. The primary focus is always on the safety and comfort of the occupants.

The digital on-board computer was particularly user-friendly. The driver of the European Show Vehicle could activate and control five different on-board programs with a multifunctional display integrated into the roof console. In case outside noise interfered with discussions between the front and rear seats, the driver could activate TravelCom: This new communications system facilitated communication between the occupants by means of invisible microphones and loudspeakers. The TravelNote voice recorder integrated in the sun visor offered a means of recording brief memos.

An absolute bonus on the safety front was the PSI tire safety information system: Transmitters on all four tires continuously indicated the current pressure. In case of reduced air-pressure, a warning display would be activated, enabling the driver to respond in good time. PathPoint, the digital compass, provided constant information on the direction throughout the trip. When arriving at home, the garage door, the garden gate or the alarm system could be operated via the on-board computer. These functions were performed by the HomeLink® universal transmitter. It replaced up to three remote controls.

For those who often have to undertake long trips by car, the European Show Vehicle offered a particularly appealing extra: a seat with integrated massage function. The Massage Seat could be set at various intensities and speeds for the shoulders, the back and for the thigh area. An acoustic highlight came in the form of Headline Audio: a new solution for the location of loudspeakers. The mid-range speakers and tweeters were moved to the headliner. The acoustic projection from above made listening to music a special three-dimensional experience. The separation of high and low frequencies also provided clearly defined sound, which would delight every music fan.

Some of these innovative ideas have already become reality: HomeLink®, the new, intelligent universal transmitter, was launched in America in 1995.

TravelNote was already in production 1998 for several models.