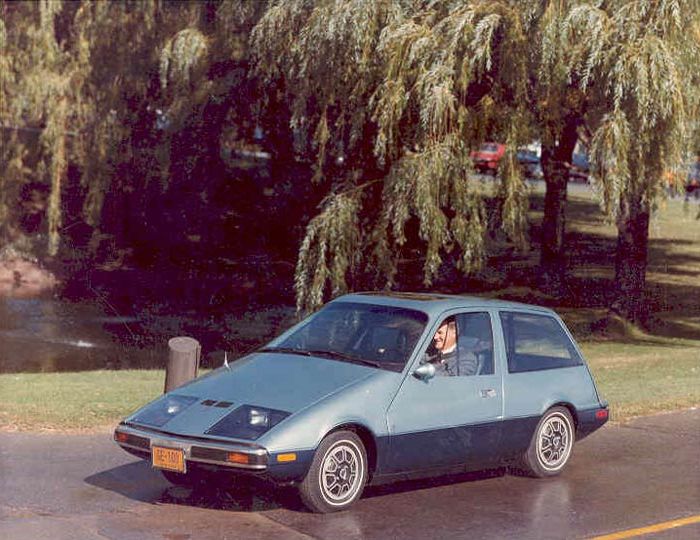 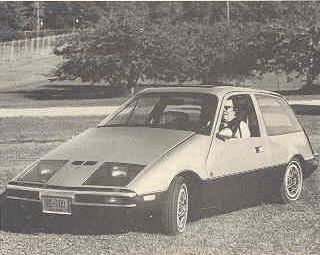 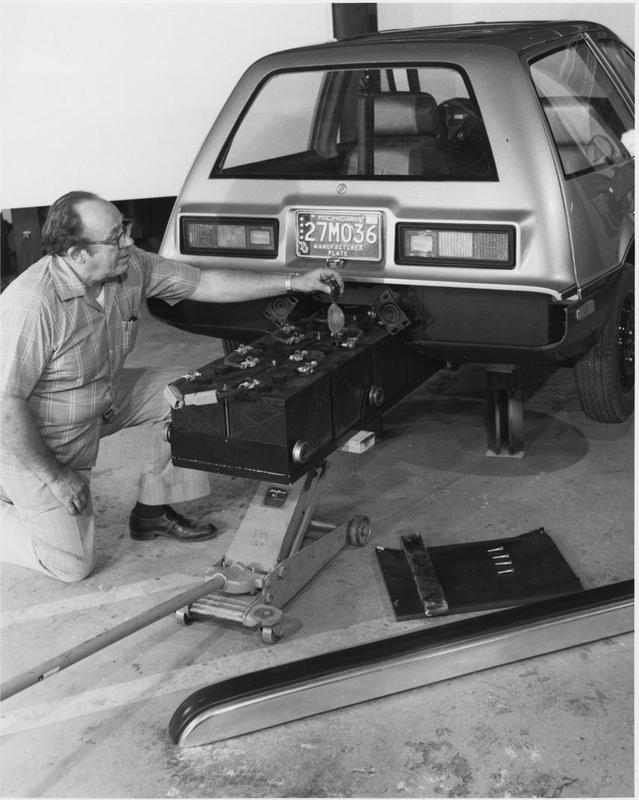 General Electric, the world's leading supplier of motors and controls for all exisiting types of electric vehicles, has unveiled an experimental, subcompact-sized auto that it describes as "the electric car of today".

The four-passenger test vehicle - announced in September 1978 - was designed "from gound up" to achieve top performance from off-the-shelf components and battery systems now commercially available in the marketplace. In honor of GE's 100th birthday, which the company celebrated in 1978, the sleek, two-toned blue vehicle has been named the "Centennial Electric".

This new test vehicle was designed to provide hard data about exactly where technology stands in the formidable quest to develop a practical electric car. It is equipped with improved lead-acid batteries, coupled with advanced solid state controls and a highly efficient electric traction motor. The vehicle is designed primarly for stop-and-go urban driving, and has an in-town range of about 45 miles between battery changes. About 11 million of the 111 million vehicles now on the national highways are second cars and delivery trucks used primarly for just this type of short-trip driving.

Electrics still must demonstrate that they can compete with conventional vehicles in such areas as reliability, safety, handling characteristics, and driver and passenger comfort, along with initial purchase price and trade-in value. A pimary reason for building the Centennial Electric was to establish just how exisiting electrical and electronic components and battery systems can approach these goals.

The development of a practical electric car is an obvious response to the world's dwindling petroleum reserves. Although GE has no plans at this time to manufacture or market electric vehicles, it foresees long-range opportunities as a supplier of components for this emerging market.

GE's Centennial Electric is literally "a laboratoty on four wheels", designed so that its systems and components can be readily replaced by improved versions that come out of GE laboratories and product departments. One of GE's future plans, for example, is to test an AC drive system in the vehicle.

GE's front-wheel-drive electric was produced in a three-year project headed by the company's Research and Development Center in Schenectady, N.Y. The drive motor, solid state controls, plastic windows and other plastic parts, headlamps, and numerous other components were supplied off-the-shelf by more than a dozen GE product departments.

Triad Services, Inc., a leading electric automobile design firm in Dearborn, Mich., designed and built the low-slung test car to GE specifications as an integrated concept, with all elements keyed to the GE propulsion system.

The car is powered by 18 six-volt, lead-acid batteries made especially for GE's Electric Vehicle Systems Operation, Salem, Va., by Globe-Union Inc., Milwaukee, Wisc. They are derived from the deep-discharge batteries now used commercially to power golf carts and forklift trucks, and can be recharged in six to eight hours by plugging them into a 220-volt electrical outlet.

Initial tests show that the vehicle has a range of 75 miles at a constant 40 miles per hour, a cruising speed of 55 mph, and a passing speed of up to 60 mph. It can accelerate from zero to 30 mph in nine seconds. By way of comparison, a conventional gasoline-powered car of similar size and weight can reach the same speed in about six seconds. Although the cars is not for sale, it was designed to sell for about $6,000 if 100,000 of them were manufactured annually in one plant.

The Centennial Electric is one of only a handful of electric vehicles that have been designed from scratch. Many existing electrics are modifications of gasoline-powered compacts or are essentially "glorified" golf carts. For example, GE's test car has no grill because there is no radiator to cool. It has a low center-of-gravity because 1,225 pounds of batteries are slung on a movable trolley beneath the vehicle and runs nearly its full length. The 24-horsepower DC series traction motor is fitted at an angle because the geometry of the drive train is simpler.

Among the features of the GE electric is the seating arrangement for rear-seat passengers. To keep the car low to reduce air drag and to permit easier entry and exiting, the seats face to the rear and are entered trough a hatchback-type rear door. The front doors open out and forward on hinged links - one pivoted beneath the driver's seat, the other hinged at the toeboard. As a result, the doors can be opened fully even when the Centennial Electric is parked within 14 inches of an obstacle.

One of the prime considerations of the vehicle's design was to duplicate the "feel" of a conventional car. For example, the front seating arrangement, instrument panel, and floor-mounted, automatic shift lever are similar to those found in conventional autos. Dials on the instrument panel show the amount of energy stored in the battery (similar to a fuel gauge) and measure electric current lights showing whether the power is on, the battery is charging, the lights are high beam, or if there is a brake failure. The shift lever indicates "neutral", "park", "forward," and "reverse".

Including batteries, the Centennial Electric weighs 3,250 pounds. It stands 53.5 inches high, and is 160 inches long, 66.1 inches wide, and has a wheelbase of 92 inches. Ground clearance is six inches. Auxiliary equipment includes a gasoline-type heater, AM/FM/CB radio, and includes windshield wipers and defrosters. Fans, headlights, and other accessories operate off a standard 12-volt battery, which is connected to an on-board battery charger.

In addition to the Centenial Electric, the GE Reasearch and Development Center presently is in the final stage of developing and building two advanced electric vehicles for the U.S. Department of Energy of its Bear-Term Electric vehicle Program. The two "integrated test vehicles" will contain new technilogy not commercially available at this time, and will have improved performance characteristics.

Please mention www.allcarindex.com when using this text or a part of it.