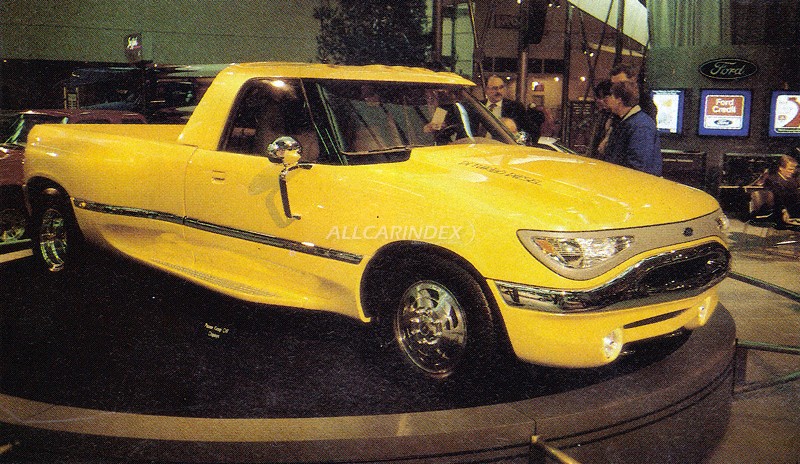 How do you introduce a big, new, powerful diesel engine? When Ford's truck team asked that of Andy Jacobson, Design Director for Ford trucks, he recognized he had two challenges. The easier was to come up with a concept that would attract everyone's attention to the 7.3 liter direct injection turbocharged diesel with 420 lb-ft of torque. More difficult was not to tip Ford's hand about the redesigned F-250 truck line scheduled for release as 1997 models.

The solution? "We deliberately made it unlike anything that we were working on in order not to give the competition any clues as to the direction our truck designs were heading," Jacobson recalled.

The team Jacobson turned loose on Power Stroke was led by Dennis Reardon. Soo Kang was the principal designer. Their Power Stroke concept was, indeed, very different. The key to making the new 7.3 liter Power Stroke turbo-diesel stand out was to make the Power Stroke concept as rugged and hard-working as the new engine. Ford's mission was to highlight the new diesel's towing capability so the concept was given dual rear wheels running LT265/70R-17 BFGoodrich Proto T/A tires on custom directional billet aluminum wheels. Built on a 1993 Ford F-350 extended cab dually chassis, the Power Stroke concept's wheelbase is stretched 10 inches but the rear overhang has been cut to keep the bed itself in proportion. Power Stroke concept's working, towing aspect is completed by a chromed fifth wheel with body-color mount permanently installed in the bed and four chrome cleats in the corners of the bed floor for cargo tiedown. The body color dual level rear bumper is accented by chromed diamond plate step inserts and a tow ball on the lower level. Tri-bar taillights flanking the tail gate complete the Power Stroke concept's presentation. Up front this impressive rig features a unique curved grille topped by a matte grey insert that extends from the extremities of the headlights all the way across the concept's nose in front of the hood and encompasses fully covered headlight assemblies with projector-style lights. A pair of fog lights are enclosed within the lower fascia which also hides an 8,000 pound winch and tow hooks. The hood itself is formed of fiberglass with carbon fiber decals. Ford's designers cleverly exposed the underlying carbon fiber to form the "DI Turbo Diesel" identification on each side of the hood's power bulge. A chrome accent strip extends from the ends of the grille along the Power Stroke concept's sides, drawing attention to the neatly formed running boards with inset chromed diamond plate steps that are integrated with the body.

The two door cab has a wraparound plexiglass windshield which looks "fast". It is shaded by a sun visor integrated with the roof and incorporating air vent slots to lower aerodynamic drag. The cab is topped by five integrated rooftop marker lights and there are work lights in the upper corners of the cab extension at the front of the bed to aid trailer hookup.

Inside, leather captain's chairs make sure the driver and passenger are comfortable on long hauls. Wide doors make it easy to step in from the integrated running boards. Occupants are also provided with all the comforts of a modern-day passenger car including power locks, air conditioning, power steering, power brakes and a cassette stereo. It is of note that this model does not have side windows and the cab section floor boards and inner section are production steel which then has a fiberglass "skin" adhered to it. The outside mirrors, which were very advanced for their day, have built in turn, stop and reverse indicators.

As offered here it is in show quality condition, with excellent, unblemished and vivid "Sierra Sun Pearl" paint that stands out in any crowd. The interior is pristine and the Power Stroke concept's chrome is brilliant. So is its concept.