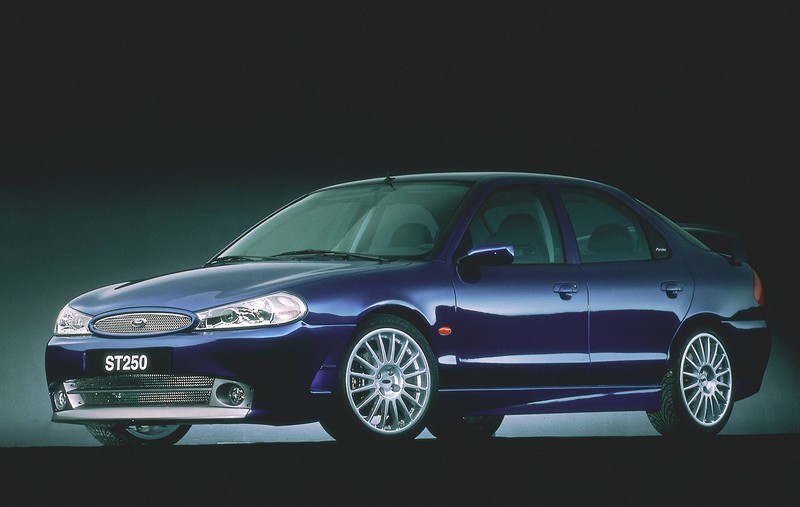 "The supercharged Ford Mondeo ST250 ECO Concept, which will run on LPG or unleaded petrol, builds on the performance technology and driving dynamics of the new Ford Mondeo ST200 road car, but also showcases Ford's comprehensive Alternative Fuel Vehicle program for Europe. This program includes a new bi-fuel Ford Mondeo 1.8 LPG production model, which will be on sale in selected markets from August," explained Will Boddie, Vice President of Ford's Small and Medium Car Vehicle Centre.

Ford has increased the capacity of the Duratec V6 engine from 2.5 to 3.0 litres in the bi-fuel Ford Mondeo ST250 ECO Concept car with a special hybrid engine configuration that includes an American Ford Taurus engine block and crankshaft, coupled to unique 12-valves-per-bank cylinder heads. The engineering team has overcome the dilemma of providing maximum power through forced induction coupled to clean emissions with a highly efficient Eaton supercharger, precise fuel metering and custom-built catalytic converters.

Innovative water intercooling also features around the air intake to produce a denser, cooler charge of air and to promote increased power and torque. Conservative estimates of 250PS are predicted for the engine - 2.5 litre 'mules' have already produced 240PS.

In addition to the six individual petrol fuel injectors, the bi-fuel capability has resulted in a further set positioned in the inlet manifold for LPG delivery. Exhaust system changes are centred around the catalytic converters which have a revised 'wash coat' or catalytic inner coating, to allow them to effectively process and breakdown both petrol and LPG gases, plus the provision of twin tail pipes.

In line with current touring car racing practice, the transmission is the latest technology auto-shift manual clutchless system developed for the Ford MTX unit in conjunction with Ford's touring-car competition partner, Prodrive. It incorporates microswitches on the steering wheel for instant gear selection, however a gear lever is retained to give the driver the option of changing gear conventionally.

Power output and driveability in the Ford Mondeo ST250 Concept is comparable regardless of which fuel is used. Ford's innovative adaptive engine control software provides optimised fuel economy and driveability across the full range of fuel compositions.

The Ford Mondeo ST250 ECO Concept utilises a toroidal, ring-shaped LPG fuel tank located in the spare wheel well, along with a conventional petrol tank. LPG is fed to the engine via a pump and fuel filter. The LPG filler neck is conveniently located behind the existing petrol flap.

The visual transformation has been designed to extract the dramatic appeal of the Touring Car Championship Ford Mondeos whilst retaining the vehicle's road-going practicality. To this end, Ian Callum has enhanced front and rear styling with purposeful mouldings. These converge with special side sills and link to a unique boot-mounted spoiler. Inset driving lights are incorporated in the lower section of the front spoiler and high power HID headlamp assemblies replace the originals.

Inside, the racing theme continues with the inclusion of individual Recaro sports seats and a complete digital instrument display for all primary functions such as engine speed, boost pressure and gear selection.

The interior marriage of function and luxury includes a unique choice of materials and finishes. Front and rear seats are trimmed in black leather with contrasting grey suede-style Alcantara panels on the seat facings and centre door panels. The exterior colour of Ford Racing Blue is emphasised inside with matching instrument bezels and seat back panels. To facilitate the smooth operation of the gearbox, a new competition-inspired steering wheel incorporating microprocessor switchgear has been developed.

The concept becomes a road reality

"Whilst the Ford Mondeo ST250 ECO Concept is sure to highlight the alternative fuels technology emerging in Ford production vehicles, the high-performance appeal of the Ford Mondeo ST200, first revealed at the 1998 AAA Berlin, employs more traditional tuning practices to produce the most exciting road version ever of this popular family car," said Will Boddie, vice president of Ford's Small and Medium Vehicle Centre.

Following a process of continual development, the production version of the high-performance Ford Mondeo ST200, is appearing at the 1999 Geneva show. This practical, high-performance road car incorporates an uprated 205PS version of the lightweight 2.5 litre Duratec V6 engine. Key to this are the tuned cylinder heads which incorporate 'extrude honing' techniques, plus revised camshafts, intake manifolds and the exhaust system.

Extrude honing is an innovative aerospace technology that involves squeezing a putty-like material containing fine grit through ports and runners that channel air. The grit polishes the surface to a high degree, allowing air to move quicker and more efficiently.

Ford Mondeo ST200 is available as a 4-door sedan, 5-door hatchback or wagon, and each comes equipped with a full body styling package, tuned sports suspension and steering, plus a 17 inch wheel and tyre package developed specifically for the car.

A powerful alternative is ready for the road

The latest addition to the Ford Mondeo family answers customer demands for enhanced environmental responsibility, by providing real benefits in fuel economy and alternative fuel compatibility, but without any compromise to performance and driveability. Ford has announced that an alternative fuel version of Ford Mondeo will be available starting in Summer, 1999 in selected European markets.

The Ford Mondeo 1.8 AFV will be available in all Ford Mondeo body styles. The Ford Mondeo joins the Ford Transit and the Ford Focus (from later in 1999) as the third European Ford vehicle to offer alternative fuel technology with original equipment manufacturer quality standards.

Innovative Ford technology assures that in addition to petrol, the car can operate on Liquified Petroleum Gas (LPG) with optimised performance, economy and driveability. AFV technology is fully integrated into the vehicle systems to assure smooth, reliable operation, safety, service and diagnostic support.

"Ford Mondeo 1.8 AFV directly addresses the environmental concerns of future family car customers," Boddie said. "It frees them to join a growing trend of environmentally aware alternative fuel users without the fear that new technology will compromise their vehicle's reliability or performance."

The addition of the LPG fuel system has been designed to be neat and inconspicuous with minimal package intrusion. A separate LPG fuel inlet is located on the opposite side of the car from the petrol inlet, and gauges allow the driver to have an instantaneous indication of fuel levels in both tanks.

The practicality of using an AFV vehicle could not be simpler. The engine starts on petrol and after 5-10 seconds automatically changes to LPG, ensuring that the petrol injectors are kept clean and operational. In addition, a switch on the dashboard allows the driver to select the fuel type manually - either unleaded petrol or LPG, and the engine management system automatically reverts to petrol should the vehicle run out of gas.