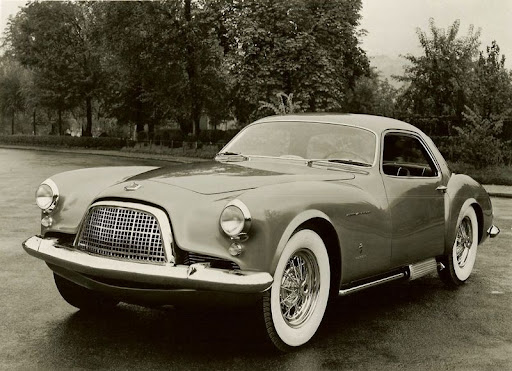 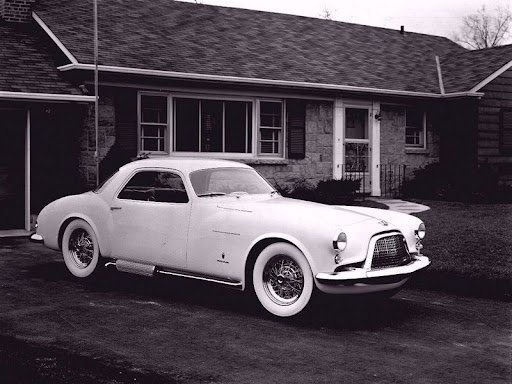 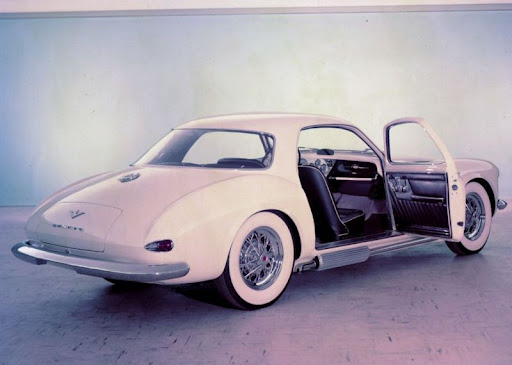 The arrival of Chevy’s two-seat Corvette in 1953 prompted the dashing one-off 1954 and 1955 DeSoto Adventurer concept cars.

Though visually related to earlier Exner specials, it mounted a 1953 DeSoto chassis cut to a suitably sporty 111-inch wheelbase. Despite the close-coupled coupe styling with no rear side windows, the Adventurer could hold four in comfort.

Aggressive side exhausts foreshadowed a feature of the far-distant Dodge Viper. A small rear hatch allowed access to the spare tire, but luggage space was evidently next to nil.

The interior was swathed in black leather with white piping, and satin-finish aluminum set off a dashboard with a complete bank of circular gauges.

Exner tried very hard to get the DeSoto Adventurer approved for limited production. But as Maury Baldwin, one of his staffers, later recalled, "Management at that point was very stodgy. A lot of people attributed it to the old Airflow disaster. They were afraid to make any new inroads."

Exner lobbied hard for a production version of the racy 1954 DeSoto Adventurer, and though it came closer to approval than any of his other specials, Chrysler management just didn’t have the courage.

"If it had been built, it would have been the first four-passenger sports car made in this country..." Ex said. "Of course, it had the DeSoto Hemi [a 1953 stock 273 with 170 horsepower]. It was my favorite car always..."

The Adventurer — a sleek, four-passenger model — will be displayed for the first time at Chrysler Corporation's national press showing of new 1954 model cars at the Company's general offices in Detroit next Thursday.

In announcing the prototype sports coupe, Mr. Woolson paid tribute to V. M. Exner, Chrysler Engineering styling director, and his group which executed the design of the Adventurer.   Mr. Woolson declared that "the DeSoto Adventurer will help to establish a new trend in modern American car design.

"We believe the styling people of cur Engineering Division are leading the industry in creating a brand-new theme," Mr. Woolson said.    "They have taken some of the most desirable features of the continental sports car and translated them into a thoroughly functional American automobile.   Here is a beautifully fashioned car that will also afford the kind of comfort and performance that we have traditionally built into our American passenger cars.

"The Adventurer offers a means of road testing these new theories of design," Mr. Woolson added, "but we are not planning any quantity production of this car at the present time."

Assuring that the Adventurer's highway performance will match its jaunty, dashing appearance is the 170-horsepower DeSoto FireDome V-8 engine cradled beneath the car's long, sloping hood.   Equipped with fluid-torque transmission and power brakes, the Adventurer's sports car roadability is further enhanced by full-time power steering—pioneered in 1951 by Chrysler Corporation.

Keynoting the styling of the Adventurer are the large diameter (16-inch) chrome-plated wire wheels, set off by white sidewall tires and simulated "knock-off" type wheel hubs.   Emphasis is given to the function and simple beauty of the wheels by fully cut out fender openings both front and rear.   This, together with the long hood line and sloping front and rear glass areas, lends the Adventurer an air of unlimited capability, in keeping with its name.

Less than 4-1/2 feet high (53 inches to top of roof), the DeSoto Adventurer is 185 inches long over-all.   The low, trim 111-inch-wheelbase car is able to accommodate four passengers with ease.

One of the Adventurer's most interesting features, in fact is the seating arrangement—particularly in the back.    Here, two generously padded and bolstered individual "wing" type chair seats are divided by a large, well-padded arm rest. The front seats are of similar design, but more nearly approach the conventional sports car type of seat.   Recessed floor area provides ample leg room for rear seat passengers.

The upholstery is black top-grain cowhide with white piping.   Door panels are trimmed in matching black leather with thin chrome strips along the bottom.   Interior hardware on either door is set into etched and burnished aluminum plate.   This same patterned light metal surrounds the seven dials in the cleanly designed, recessed instrument panel.   The dials hold a clock, tachometer, speedometer, and oil pressure, fuel, water temperature and ampere indicators.

Front fenders on the Adventurer, blend into the car's body and rise above the level of the nose of the hood.   Head-on, the car presents an exceedingly neat appearance with its simply designed grid-pattern radiator grille and V-shaped wrap-around bumper.   The headlights are set in the ends of the fenders, well up,-with parking lights directly below.

From the rear, a distinguishing characteristic of the DeSoto Adventurer is the sweeping curve of its extra deep wrap-around rear window, which is several inches "taller" in the center than at the ends.   This allows area for a wide package shelf behind the rear seatbacks.   The short rear deck drops off rapidly from the bottom line of the back window.   The gasoline filler pipe is located in the center of the rear deck and the spare tire is stored in a compartment just above the rear bumper.   Taillights are small, and recessed in chrome fittings.

The car has a dual exhaust system, with polished visible exhaust lines carried along the outside, just below the door sills. Imparting a European road racing touch, also, are the finned muffler shields.

Chrysler Engineering Styling Director V. M. Exner says of the DeSoto Adventurer:   "In designing this car—the newest member of our family of special prototype sports models—we continued to work on this premise:   that to be properly styled, an automobile must first be conceived as a whole unit.   All components must be integrated in a single purposeful theme, from bumper to bumper.   We feel we achieved this in the lines of the DeSoto Adventurer, and will be interested in the motoring public's reaction."