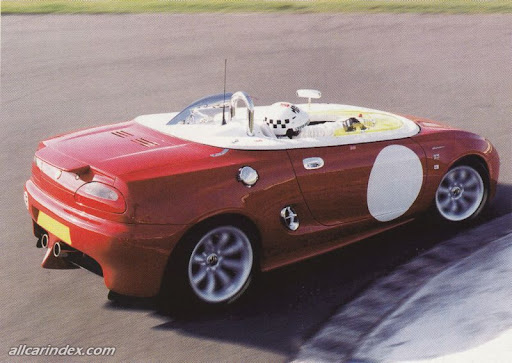 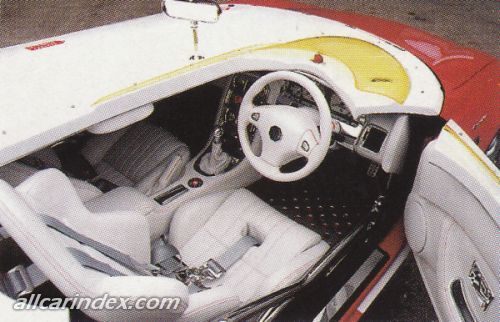 Also known as the EX254, the very first high-performance road-car derivative of the MGF was first seen at Geneva in March 1998. Not a car for the shy at heart, the concept was for a weekend race car: a car that could be driven to the track, raced, and hopefully (exurberance permitting!) driven home again at the end of the day.

Changes were extensive. Visually, these were very obvious, from the new front and rear bumpers, swollen wheel-arches stretched over 8-spoke minilite-style alloy wheels shod with 210/605 R16 race tyres front and 220/640 R17 race tyres rear. The windscreen frame was ditched too - replaced by a perspex aerodynamic flaring to keep the bugs out of your teeth, with roll-over safety protection proved by a welded-in roll-cage with a single hoop behind the driver's head. No so obvious to the eye was the uprated race-spec suspension (inherited from the MGF Cup Cars), coupled to a Supercharged 200Ps K Series engine, co-developed with Janspeed. Stopping this potent combination was the responsibility of a set of anchors provided by AP Racing. This was a massively desireable project - although in the form first shown was far too compromised for a vehicle costing twice the amount of the then-entry 1.8i MGF model.

In addition to the supercharged engine, the MGF-based Super Sports includes uprated brakes and suspension and reinforced front and rear subframes. However, the use of aluminium body panels means the car is 62kg lighter than the current road-going MGF. The MGF Super Sports has a set of very nice 8 spoke alloy wheels, and shod with some wide and ultra low profile tyres