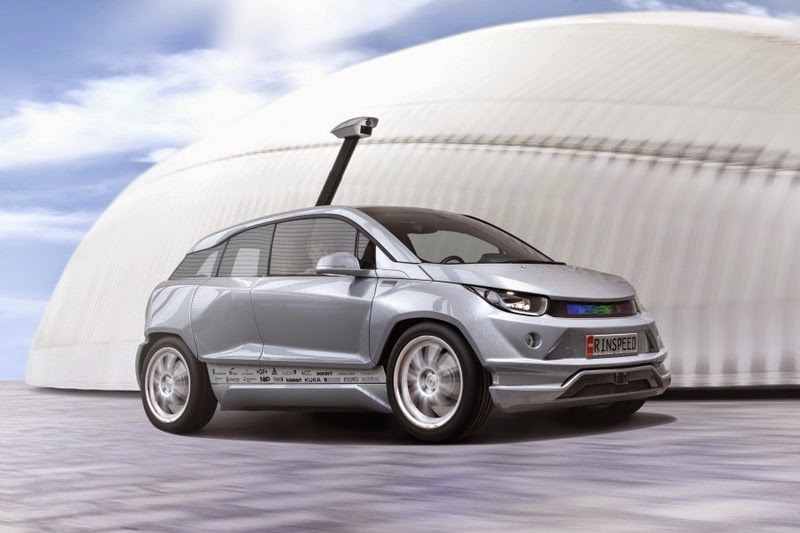 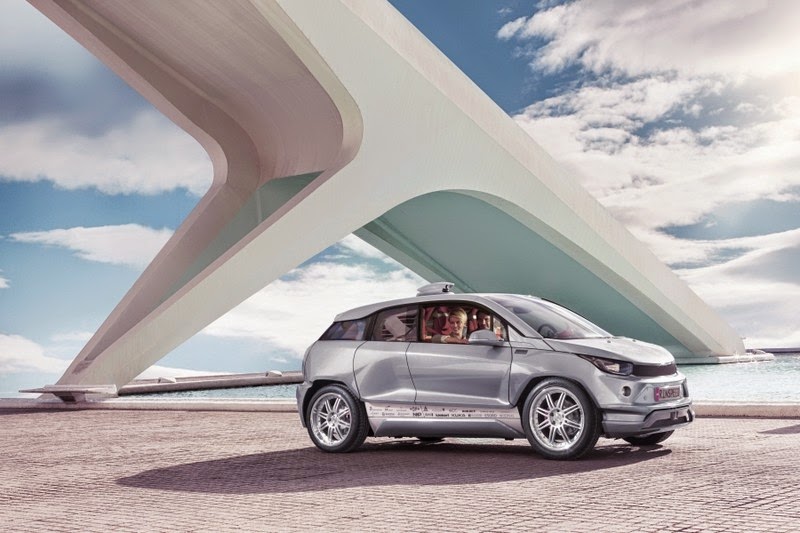 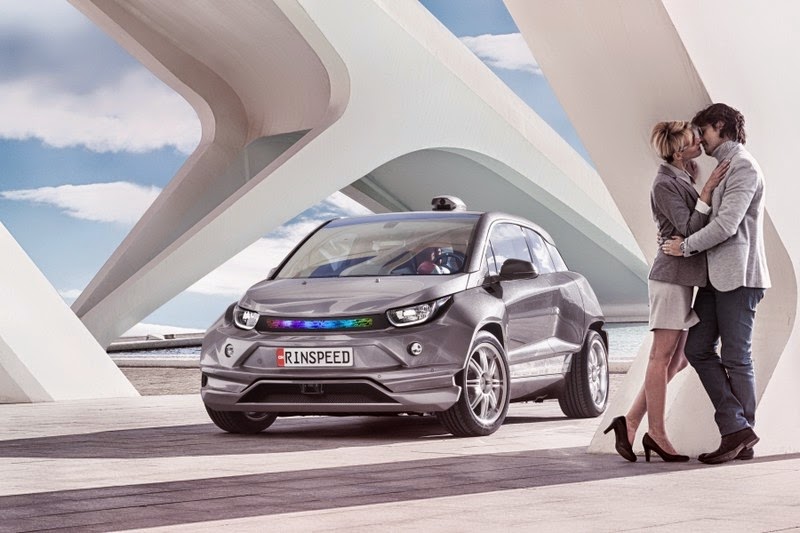 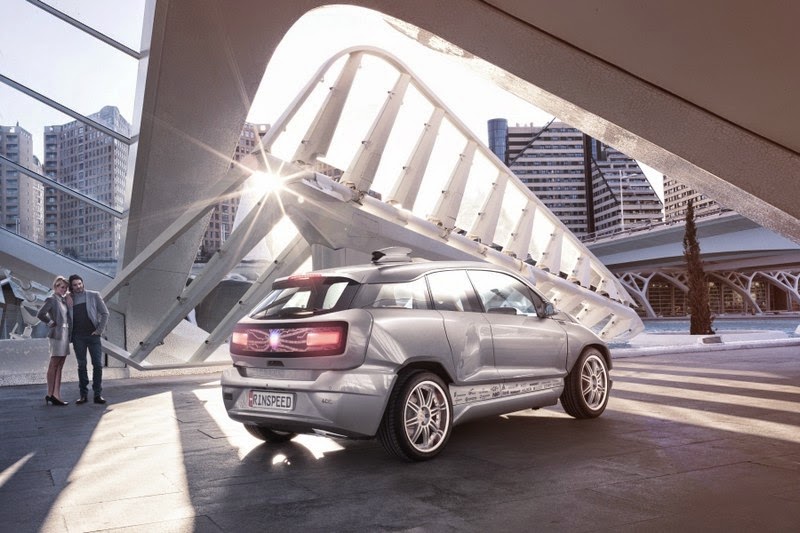 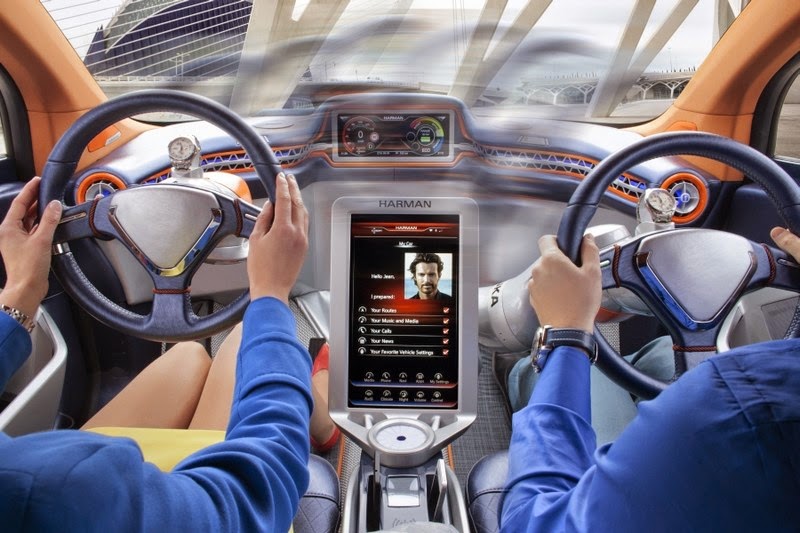 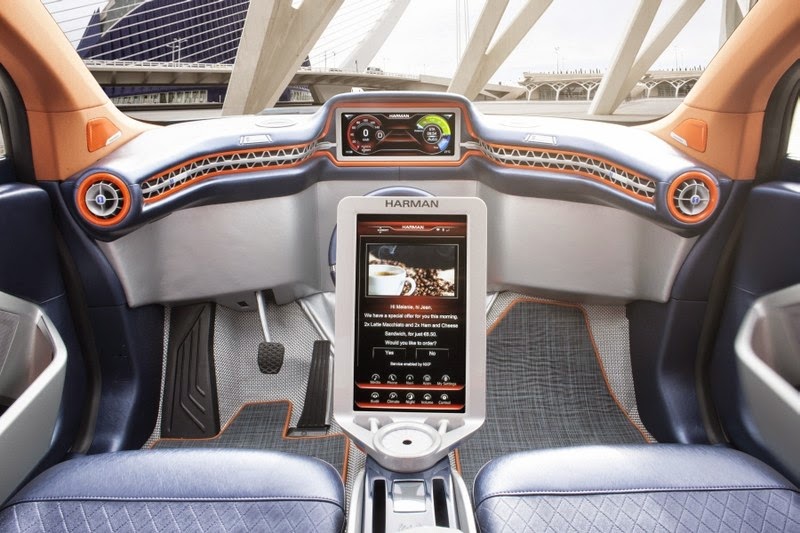 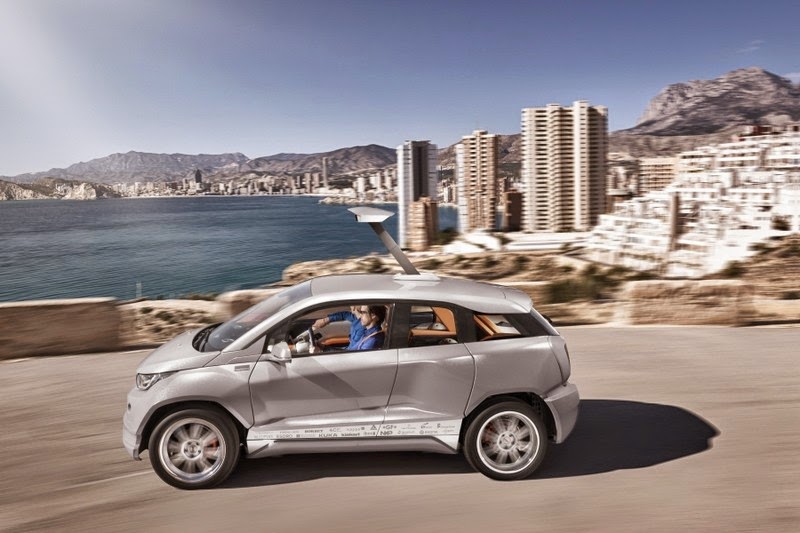 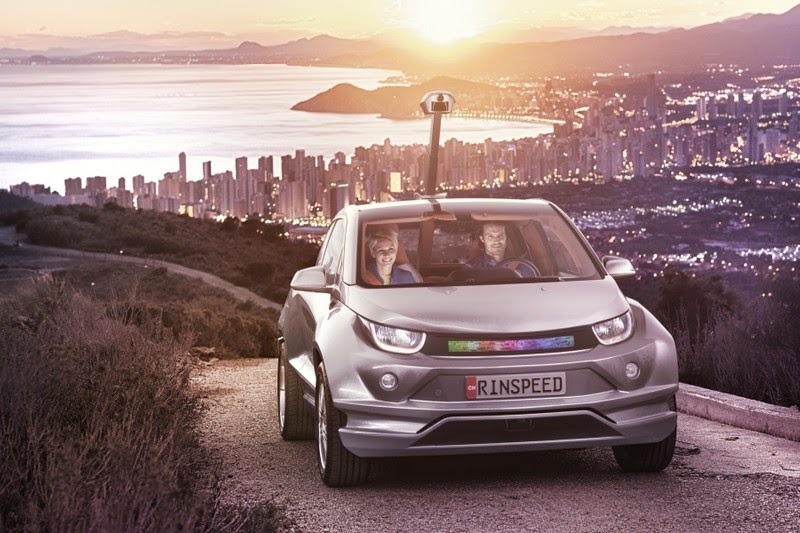 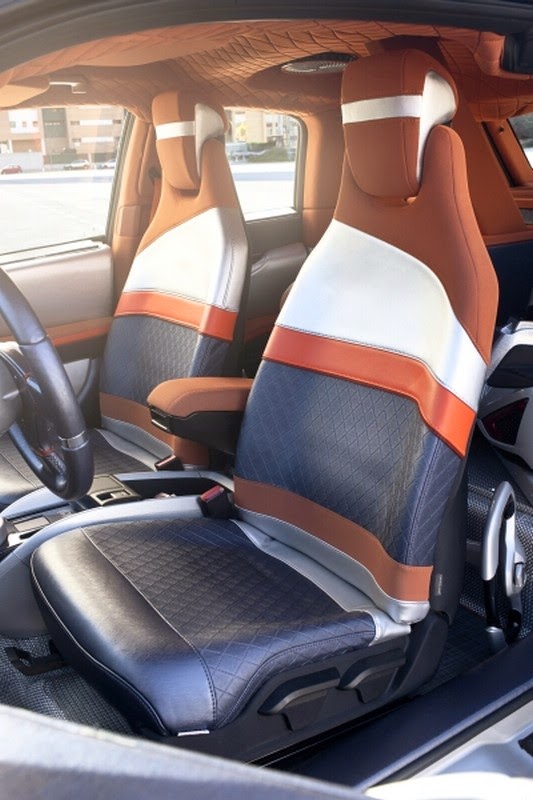 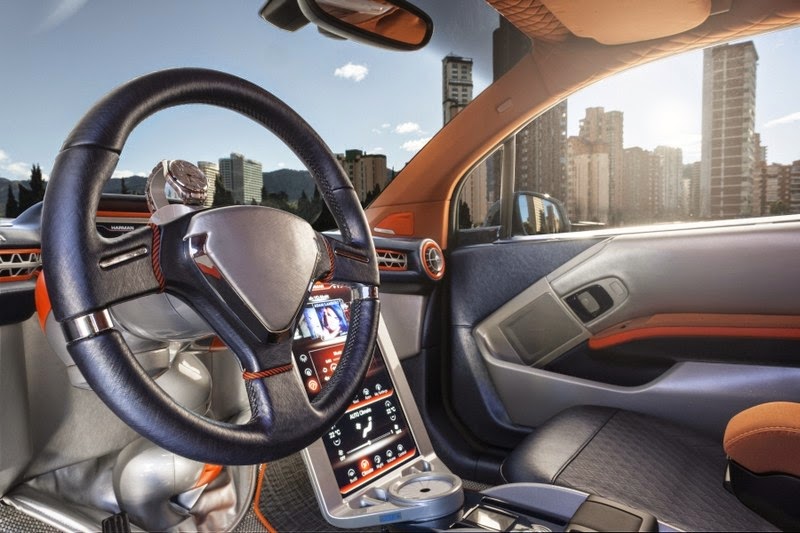 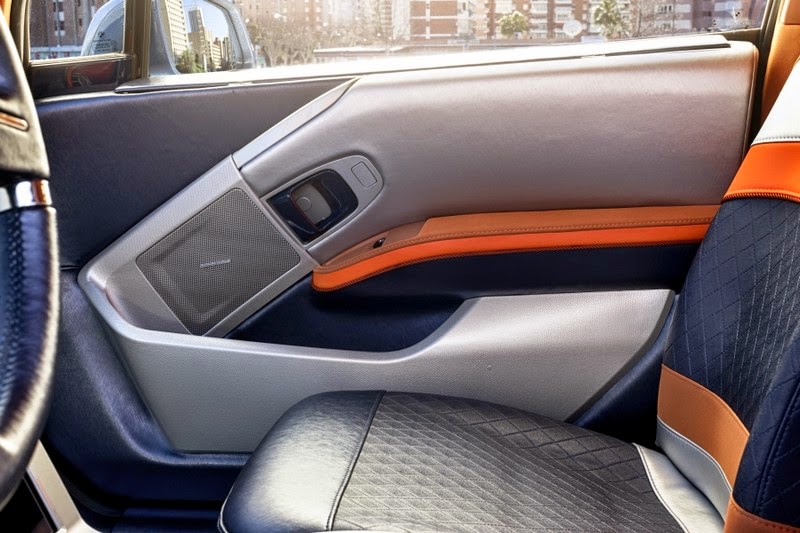 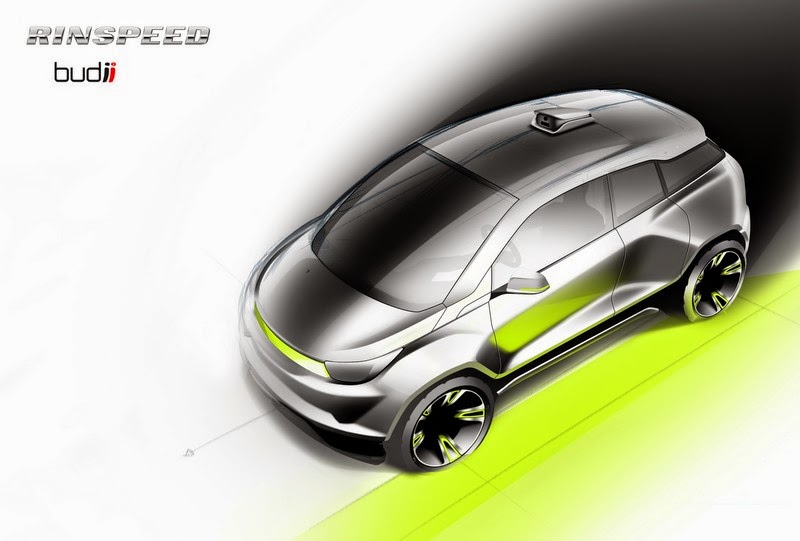 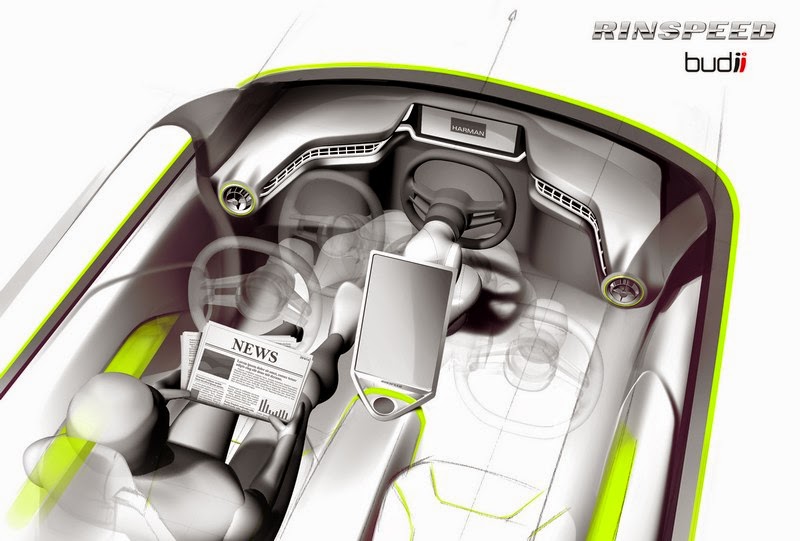 Reach out to robots

The vision of autonomous driving will soon become reality and will fundamentally change the interaction of man and automobiles. While the research centers of the automotive industry are still feverishly working on the technical solutions, progressive thinkers such as the Swiss idea factory Rinspeed are already giving concrete thought to how automated private transport will transform the car and the man-machine system. Besides fundamental conceptual changes, this will also have to involve issues of ethics and society.

In the past, the robots in the factories of this world merely assembled cars for people. In the new “Budii” concept car from Swiss automotive visionary Frank M. Rinderknecht the machine now literally reaches out to man: if the occupants of the autonomously driving electric vehicle feel like having some fun at the wheel on a twisty country road or off road, a robotic arm will hand the steering wheel to the driver of front passenger as desired, thereby transferring command. The sensitive 7-axis unit from Augsburg-based market leader is more than merely a steering column, however. In theory, it will make endless adjustment options possible: for example, during automated driving in the daily commute it parks the steering wheel in the center with minimum space requirements or it serves as a table or attentive personal valet. This is made possible by the unique and multi-redundant “steer-by-wire” technology from Paravan.

For the automotive idea factory Rinspeed the robotic arm in “Budii” is a symbol and food for thought at the same time. Rinspeed-Boss Rinderknecht puts it as follows, referring to a joint study with consulting firm EY: “The autonomously driving car will require more than solving technical problems and legal issues in the next two decades. We not only have to redefine the interaction of man and machine, but must also raise questions about responsibility, tolerances and expectations.” According to Rinderknecht, autonomous driving will undoubtedly offer the opportunity to make traffic more people-friendly and reduce the number of traffic accidents worldwide. “But even the best technology will not be perfect, albeit less prone to error than humans. That is something we will have to accept,” says the boss of the Swiss powerhouse of automotive ideas Rinspeed. “We should not develop a blind, but rather a healthy trust in the new capabilities of the hardware and software.”

“In the future, cars will do just as we do: they will keep learning every day, and as a result will get better and better at mastering the complex challenges of modern-day private transport.” To this end, “Budii” will take information from its surroundings, its own “experiences” and those of other vehicles along its route into consideration. The long-term result will be a cognitive and intuitive autopilot. The Swiss company will demonstrate what such a “friend on wheels” could look like with the trans-urban SUV “Budii” at the 2015 Geneva Motor Show.

Its entirely new operating and display system features a host of innovative entertainment, safety and service functions, and is based on the next-generation scalable platform from Harman, the world market leader in infotainment systems. The technologies of Rinspeed’s long-time main partner integrate all features of the RoboCar and quasi bring “Budii” to life. The system independently identifies the habits and preferences of the driver, and consequently reduces the necessary operating steps to a minimum. In this way, the car turns into a learning and proactive companion. The Harman audio division supplies the premium sound system of the Harman Kardon brand, letting “Budii” indulge its passengers with music in best HD quality.

The HMI design was created by Luxoft Consulting Germany, the lightweight-construction aluminum frame for the central display by Georg Fischer Automotive. NXP with its intelligent networking technologies provides the secure connection of the car and its occupants to the outside world. This includes radar and ‘Vehicle-to-X’ solutions as well as automatic payment for parking via NFC, cell phone charging by means of wireless power charging, clever access solutions, and a keyless entry remote for unlocking, starting and customizing the vehicle. In addition, solid state lighting products provide the proper LED lighting on the vehicle.

In keeping with a long-standing tradition, the electrically powered eye-catcher based on the BMW “i3” was engineered by Swiss company 4erC. The technical implementation was in the hands of Esoro, which also put “Budii” on sporty 19-inch 8-twin-spoke alloys from Borbet. The technical goodies include an air suspension with a ride-height adjustment range of 100 mm, which will ensure that fun escapes from daily routine will continue to be possible in the future. A telescoping laser scanner from Hamburg-based Ibeo Automotive Systems on the roof called “TrackView” can be raised by 70 centimeters and delivers a precise 3D perspective by means of sensor fusion.  In concert with a high-resolution camera from Kappa optronics it maps the terrain. As a result, the ride height and suspension of the vehicle are adjusted accordingly. What’s more: it also makes it possible for the driver to identify and avoid potential obstacles at an early stage, and even have the vehicle do so autonomously.  As a special gem for mobility on the final stretch to the destination, the development engineers have incorporated two electric two-wheel mini vehicles that are housed conveniently in retractable automatic drawers on either side of the vehicle.

Comfortable access to the interior is provided by the innovative electric door opening and closing system from technology leader Kiekert, while privacy during autonomous driving is ensured by a folding fan system from Zypalis whose leaves can be custom-printed. Front and rear multifunction panels from Swiss company Weidplas integrate turn signals, brake lights and tail lights. They also use ambient light effects and communication elements to stay in contact with other road users. The integrated fiber optics and semi-transparent covers of these panels are made from PMMA supplied by specialist chemical group Evonik, and attached using Sika bonding and sealing materials.

The fact that electric vehicles can also be sexy and emotionally charged - in Rinspeed’s view even have to be in order to sell better - is proven by “Budii’s” bright anthracite paint finish with sparkler effect. In the interior, designed jointly by Hornschuch and Strähle+Hess, silver-colored and midnight-blue “skai” surfaces as well as the cognac-colored textile with signal-orange highlights in edging and band create a feel-good lounge atmosphere. The floor carpets and floor mats were supplied by Racemark Industries, the innovative rear shelf made from thermoplastics by Schoeller Spinning Group. The finishing touches for the entire interior decoration were added by the firm of Mansory. Removable Plexiglas worktables allow relaxed working during autonomous driving.

The air outlets with ambient lighting in the dashboard, the wellness shower in the headliner and the center console with cup holders and stowage compartments for cell phones complete with inductive charging function come from Dr. Schneider Group. A particularly efficient electric heating system from Eberspächer ensures cozy warmth in the interior. It also provides pre-heating of the battery and ensures a convenient auxiliary heater function. In keeping with the times, the system is controlled via smartwatch or smartphone.

The look through the steering wheel reveals the world’s most intelligent watch winder. That is another trick “Buddie’s” robotic arm has up its sleeve, proving it truly is a friend of the driver: it uses ingenious motions to wind the movement of the classy and technically sophisticated “Manero PowerReserve” watch from Lucerne-based watchmaker Carl F. Bucherer as soon as the high-resolution Kappa camera in the interior recognizes that the power reserve displayed on the watch face is about to be depleted. Well yes, sometimes they are also a little bit playful at the Swiss think tank and mobility lab Rinspeed.

As in the past, Saarbrucken-based advertising agency Vollmond has also staged the twenty-first Rinspeed concept car to full effect.