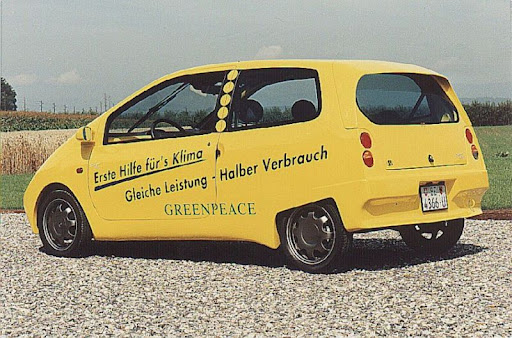 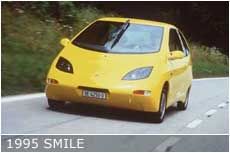 The SmILE (Small, Intelligent, Light and Efficient) project was aimed at halving the energy consumption of a Renault Twingo with identical driving performance and transport capacity. The consumption of 3.4 litres/100 km (69.2 mpg) in the NEDC (New European Driving Cycle) achieved a cut in consumption of just under 50 %, the vehicle's emission values were below the EURO III emission values and the driving performance (acceleration, top speed and range) increased.
SmILE was developed for Greenpeace Germany, subcontracting for the Swiss engine developer SwissAuto. ESORO was responsible for reducing the aerodynamic drag (-34%), the weight (-150KG) and the rolling resistance (-30%).

In-depth work on the aerodynamics which was measured in the 1:1 wind canal of SF Emmen led to a measured reduction in aerodynamic drag by 34 % (cd 0.246 instead of 0.371). It was possible to reduce the rolling resistance by 30 % by using low-rolling-resistance tyres and it was possible to make the vehicle 150 kg lighter by the use of various lightweight construction measures. The completely new engine has a far higher efficiency in the NEDC test cycle and in day-to-day use, primarily in the part-load range, owing to the Comprex pressure-wave supercharger.