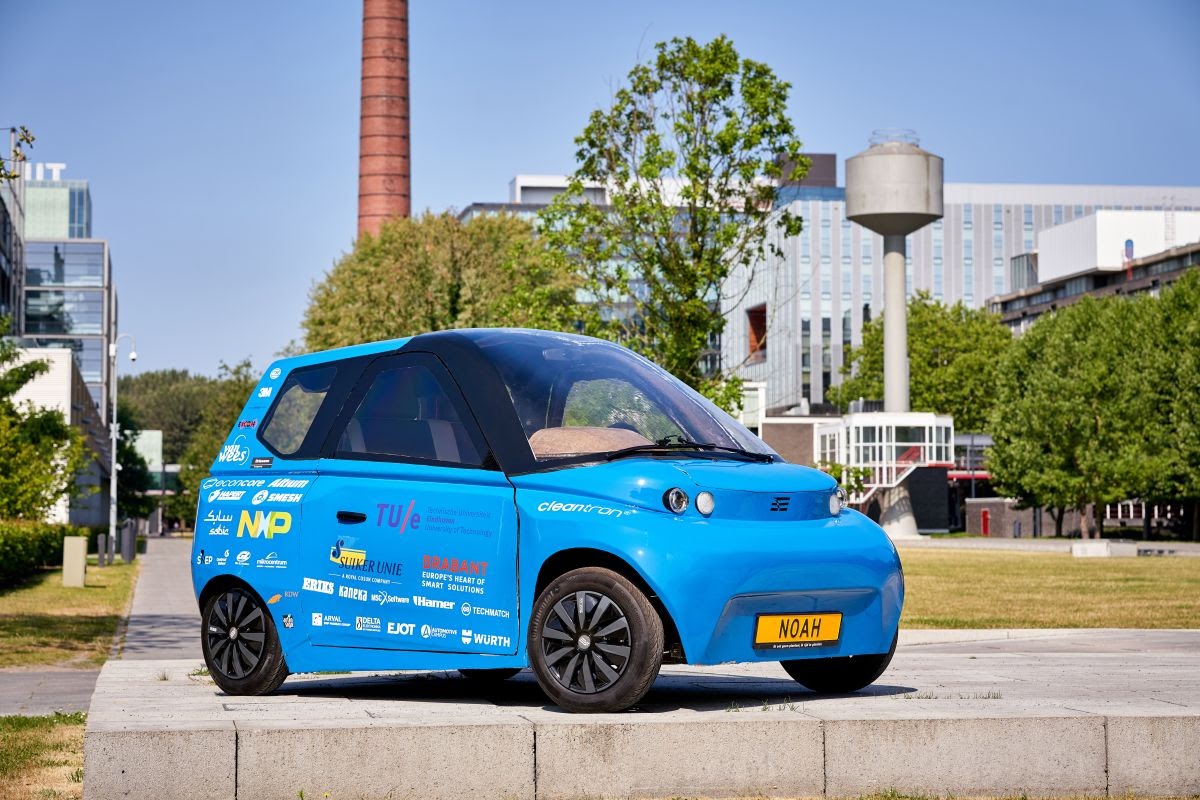 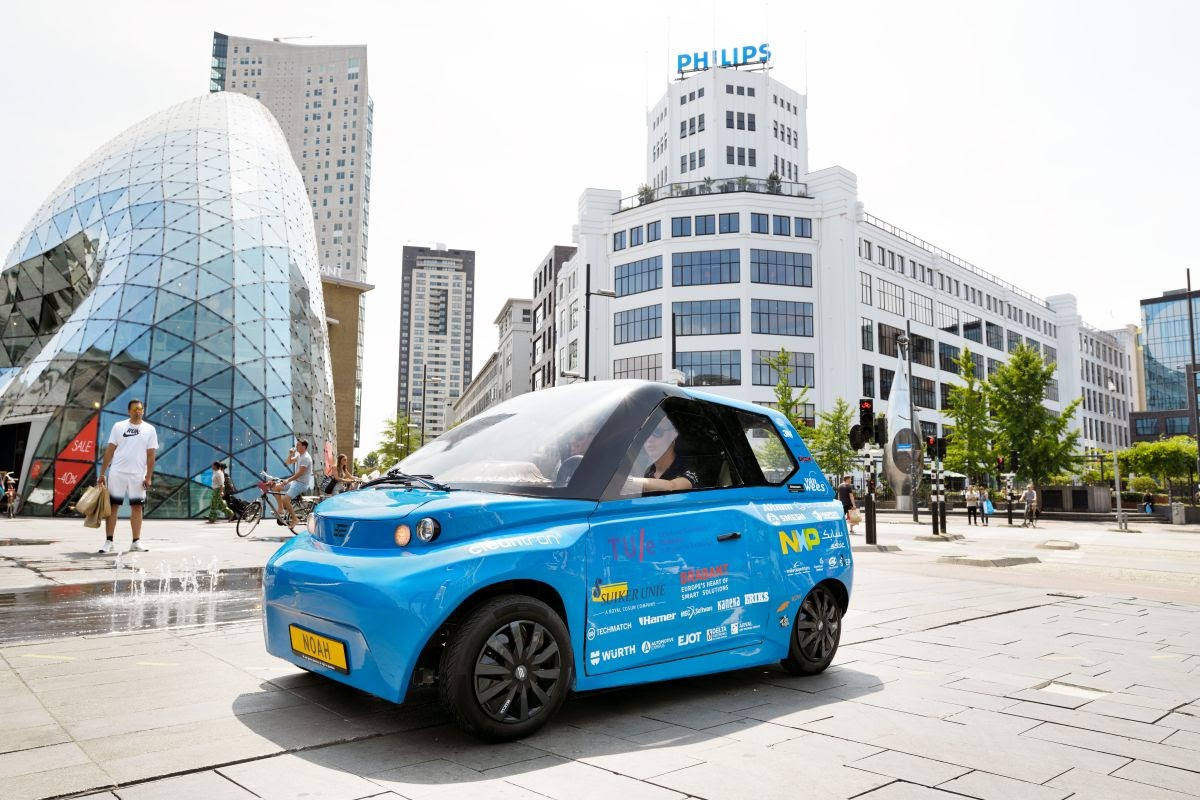 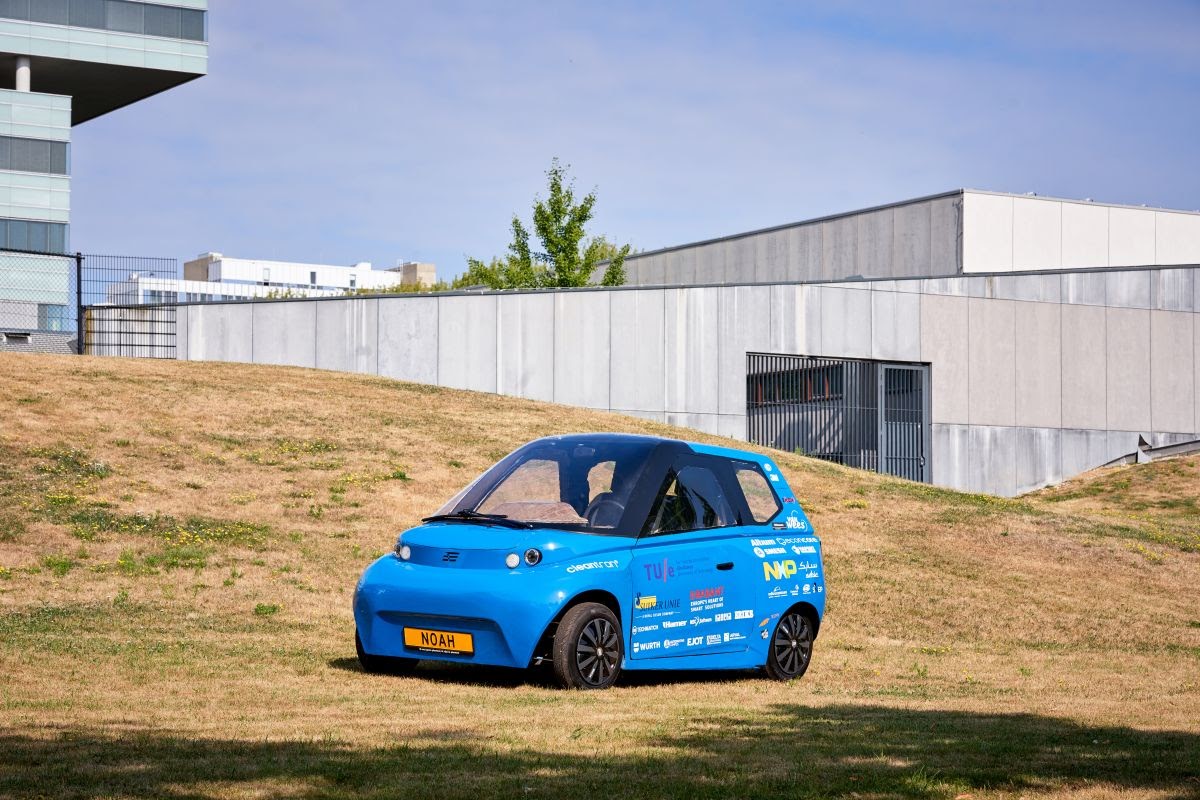 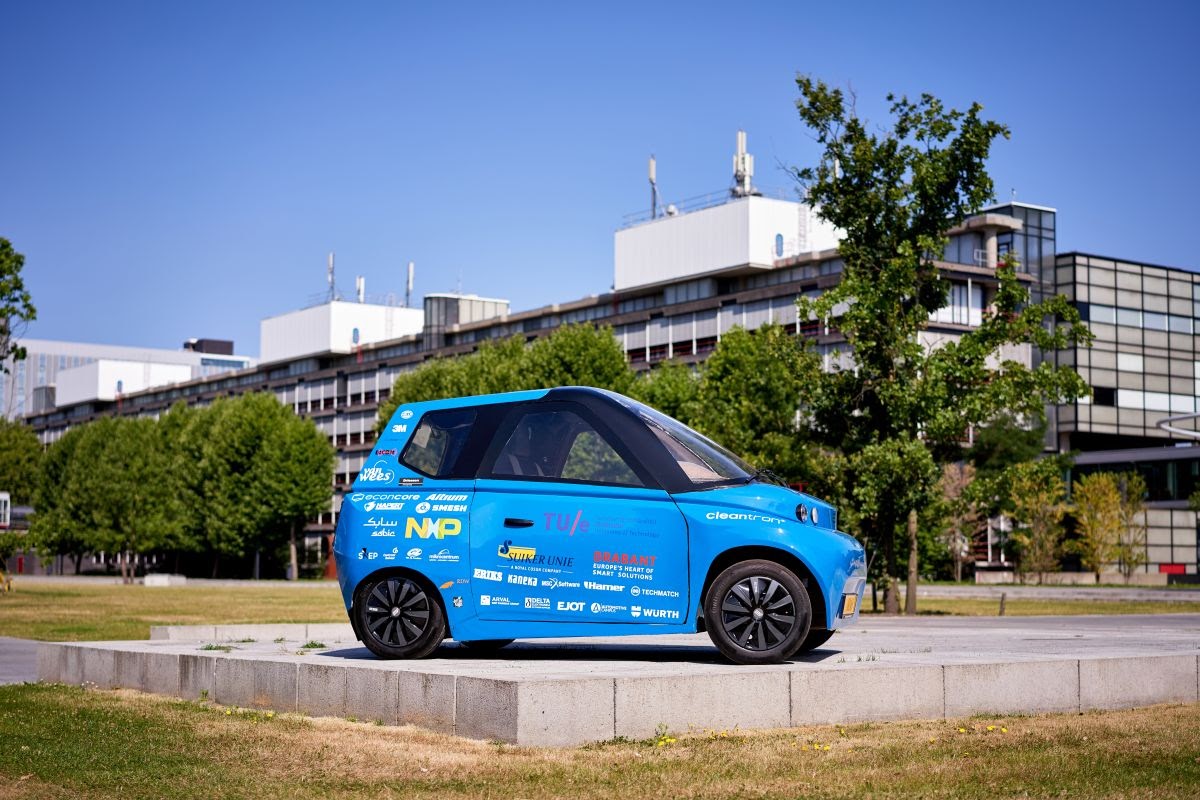 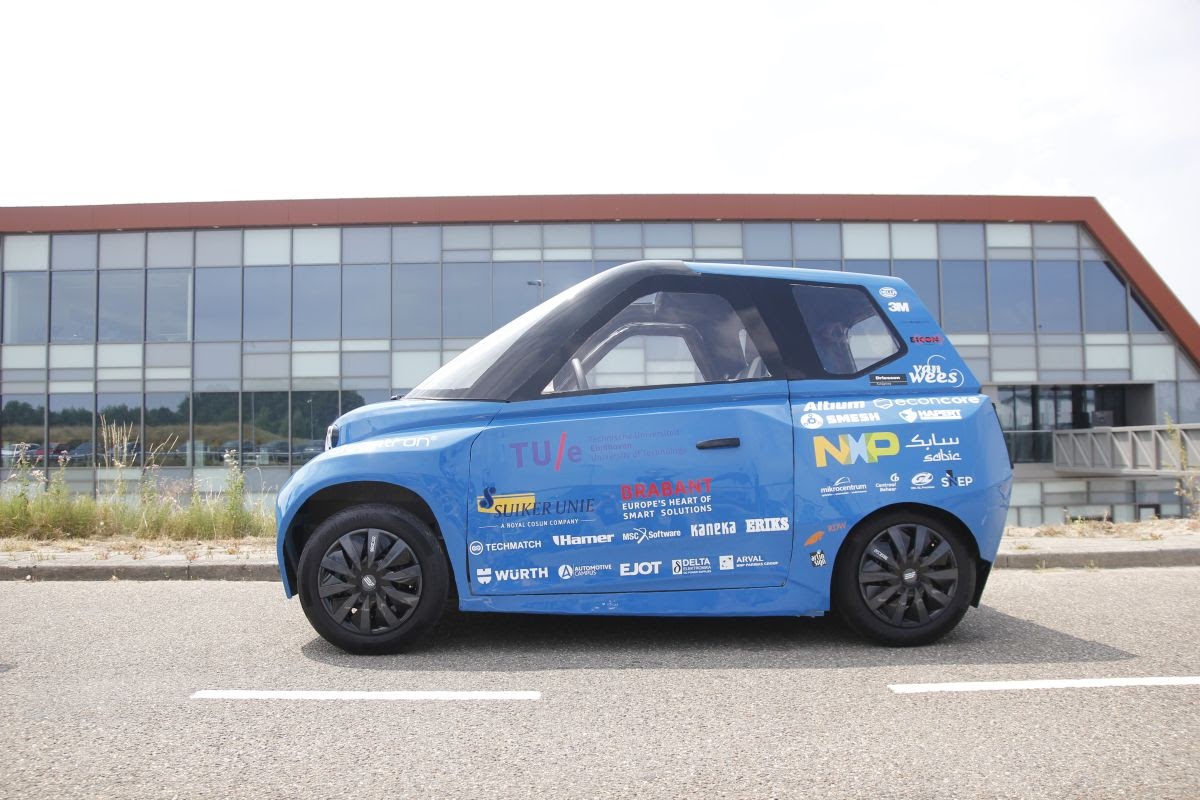 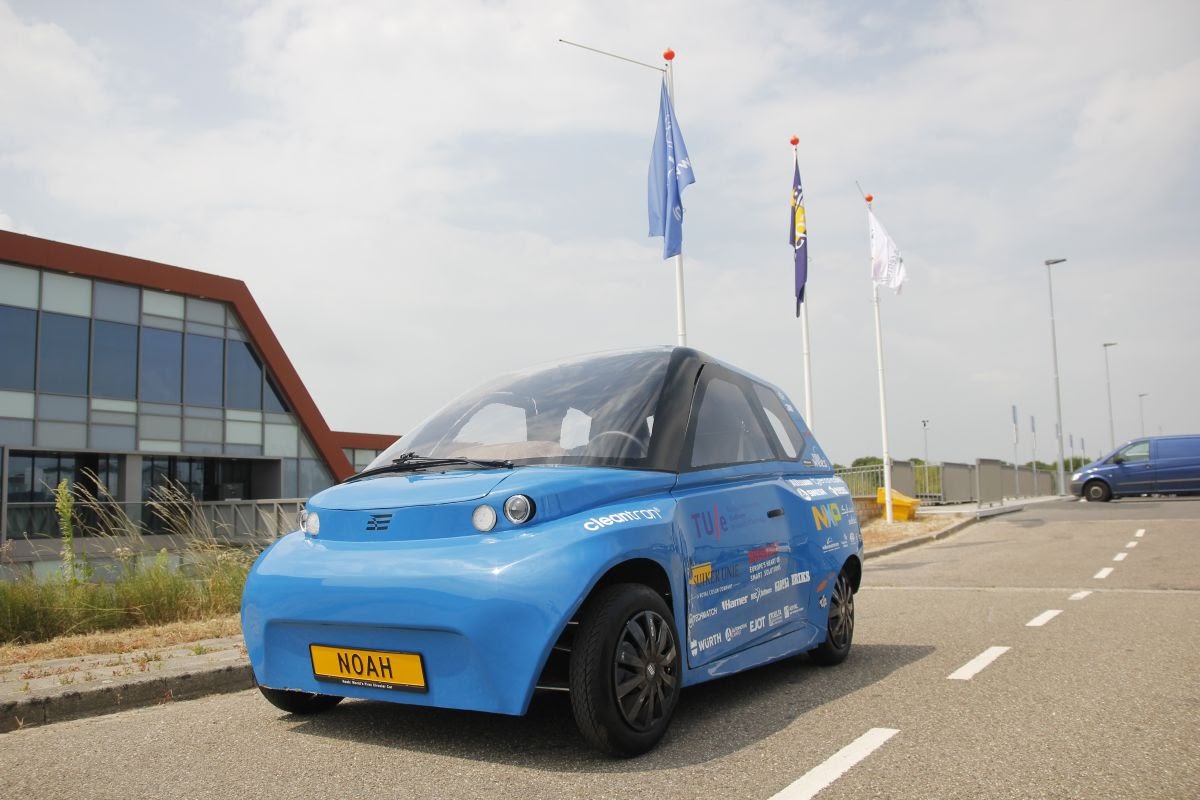 The environmental impact of a car is determined not only by its consumption, but also by its production and, ultimately, its recycling. Students at Eindhoven University of Technology therefore developed a car that is optimal in all these respects. The result is Noah, an ultra-light, electrically-powered prototype based on flax fiber and sugar, with a fuel economy of 1 liter of petrol for 300 km. Noah was revealed on July 6, 2018. The student team, TU/ecomotive, will now go for a license plate that they expect to obtain in September 2018.

Low total weight Noah is an electric city car with two comfortable seats and a spacious trunk, a top speed of 110 kilometers per hour and a range of 240 kilometers. The expected consumption in urban traffic is approximately equal to 300 kilometers to 1 liter of petrol. This is partly due to the low weight. Without batteries Noah weighs 360 kg, which is less than half that of comparable production cars. The car only needs 60 kilos of batteries, whereas regular electric cars need several hundreds kilos. The low total weight of 420 kg enables particularly good road holding. Next to this, Noah’s drivetrain is fully optimized and features the SmeshGear, a revolutionary transmission. The prototype will soon be certified for use on public roads.

Not Spartan TU/ecomotive is a student team of TU Eindhoven that devises and builds a new sustainable car every year. The aim of this year was to show that it is possible to make a car that has a low environmental impact over its entire life cycle, without being Spartan.

Sugar and flax A special aspect of Noah is the use of a bioplastic which can be made from sugar. The chassis and the interior are made of particularly strong sandwich panels, made of this bioplastic and flax fiber. The body is made of flax mats that are injected with a bio-based resin. These biological and particularly light materials require up to six times less energy to produce than the usual lightweight car materials such as aluminum or carbon. Still, the students claim that they have the necessary strength, and it is also possible to create a crumple-zone-like structure. Flax is a widely used intermediate crop that is essential to soil enrichment, so its cultivation does not compete with food production.

Raw material At the end of its useful life, the biocomposite can be ground and used as a raw material for other products, such as building blocks. The non-organic parts of the car can be included in the existing recycling chain. From a survey by the student team, there appears to be no other car on the road that has just as low an environmental impact over its entire life cycle, not even a prototype.

Awareness During the summer months, the team is visiting European car manufacturers, suppliers and universities, among others. The students have no plans to bring the car to market. “It’s about awareness,” says team member Cas Verstappen, a student of Automotive Technology at TU/e. “We want to show that a circular economy is already possible in complex products such as cars.” He does not expect similar cars to come onto the market immediately, but he sees the use of bioplastic panels in the structural parts and the interior as a real option. Not only because of their durability, but also because they are strong and light.