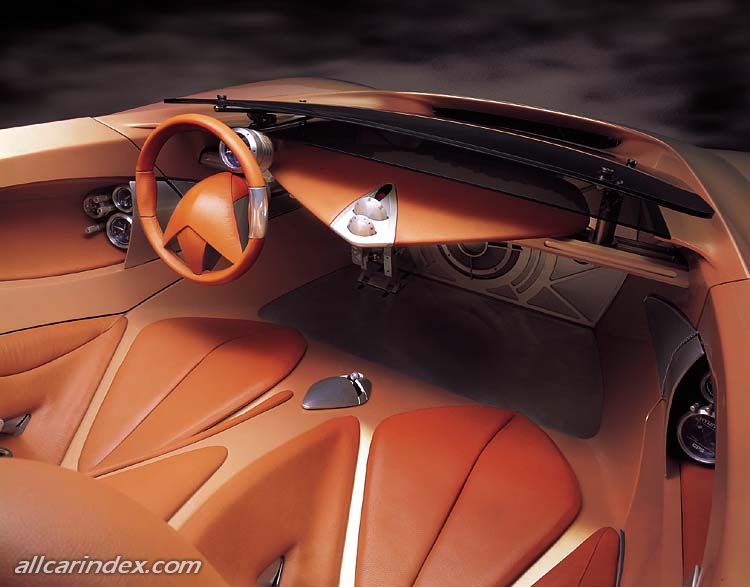 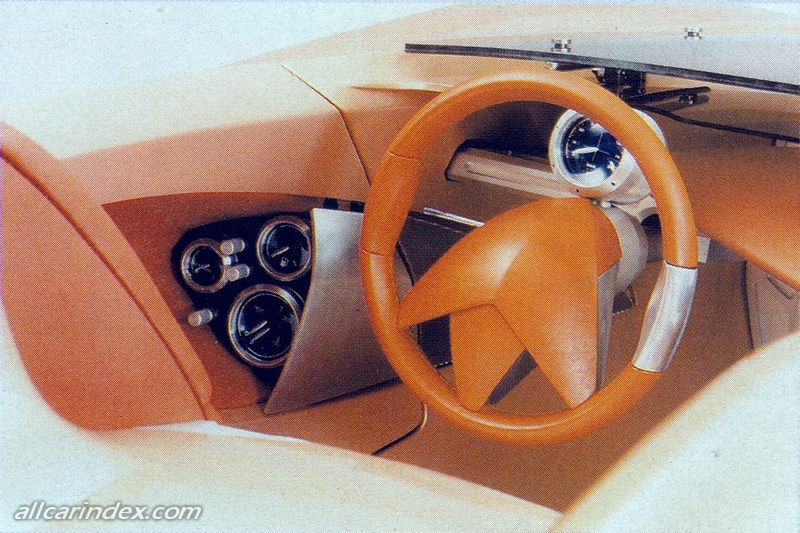 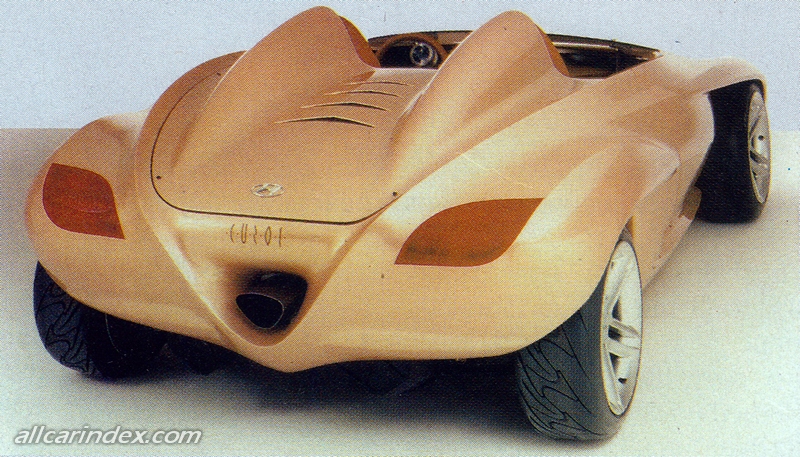 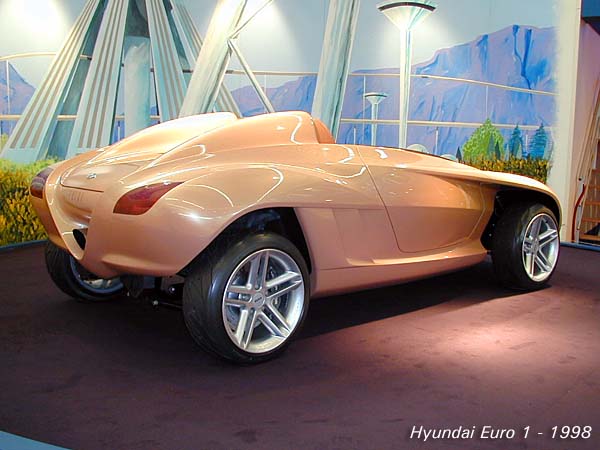 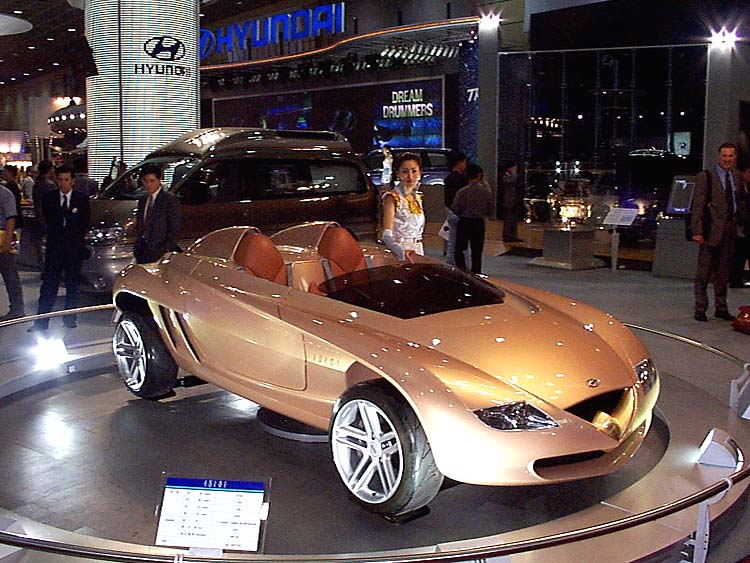 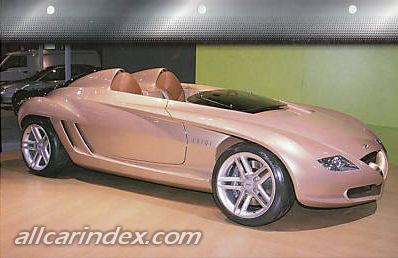 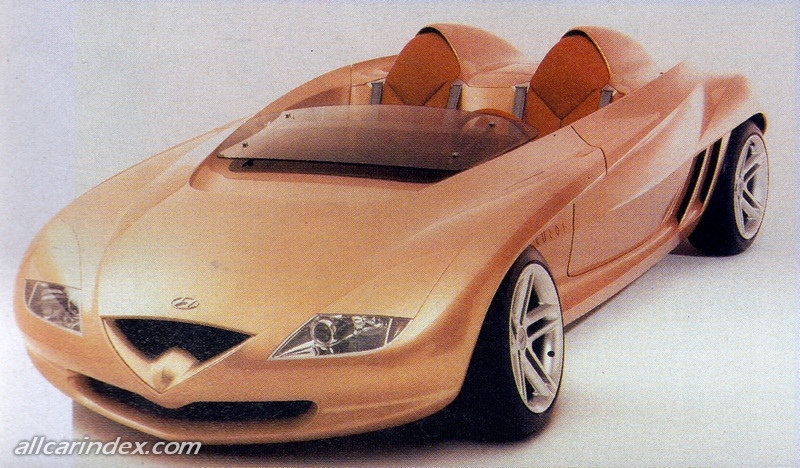 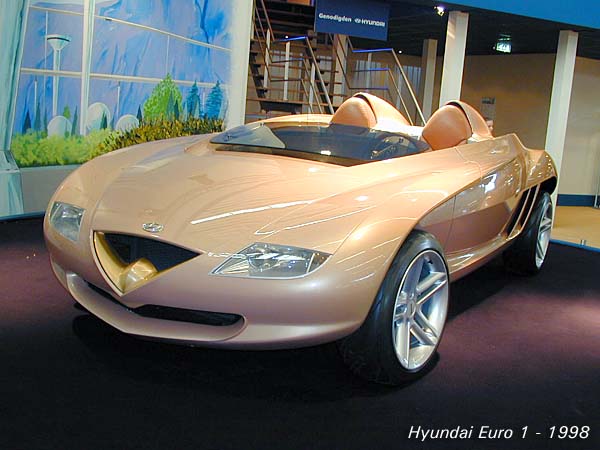 Inspired by the glamour of the road racers of the 1950s but with the technology of the 1990s, Hyundai are putting the final touches to Euro 1 - a car that is more than just a concept.

Being readied for the Geneva Motor Show at the beginning of March, Euro 1 is the first concept car to come from Hyundai's Frankfurt styling and technical studio.  The project team was led by two British specialists - head designer David Cutliffe and materials expert Antony Dodworth - who joined Hyundai from McLaren.

Featuring Formula 1 levels of technology Euro 1 is, as David Cutliffe explains: "A car totally dedicated to the sensation of driving.  The driver is in total control of this car and suffers no diversion from the business of motoring."

With the six-speed clutchless transmission controlled by a twist-grip integrated into the steering wheel, a body constructed from a super lightweight mixture of carbon fibre, epoxy biaxial continuous fibre cloth and a honeycomb sandwich, a turbo-charged four cylinder engine delivering 380 bhp and all-round ventilated disc brakes with Alcon six-pot callipers, it is clear that Euro 1 offers the future motorist the sensations that only Formula 1 drivers currently experience.

The cockpit of the two-seater reflects modern competition cars with the seats integrated into the bodywork and the driver sits inside a safety shell, held by a four-point harness belt.  The important dials and controls are right in line of sight.  Pedals and steering wheel are both electrically adjustable to provide perfect seating comfort and completing the picture is a small hydraulically operated windscreen which raises just enough to deflect the airflow over the heads of the occupants.

The racing pedigree is further enhanced with a no-compromise double wishbone suspension set up at front and rear keeping the specially-designed Michelin low profile tyres and elegant 17 inch Momo wheels in contact with the tarmac.

But Euro 1 remains essentially a road car and has been built as a fully mobile test-bed to examine current leading-edge technology for the next generation of Hyundai production cars.

Sung Woo Ko, manager of the Euro 1 project said: "This vehicle is a logical step in our programme of research-oriented concept cars which goes back to the original HCD 1 - designed in California.

"Hyundai has a global network of design and development offices and is committed to producing cars that meet and exceed the demands of drivers all over the world.  This project was one which could best be built here in Europe where both the specialists and the technology are readily available," he added.

David Cutliffe added: "It was particularly advantageous to have Antony as part of the team as he brought a great deal of knowledge from the world of Formula 1 motor racing with him from McLaren.  He not only knew which materials to use, but also where best to use them."

"The result," said Antony Dodworth," is a phenomenally rigid and strong monocoque tub which supports the rest of the structure."

The team, and Hyundai, have already come under pressure to reveal if Euro 1 heralds a limited production run and although no plans have yet been announced, the longer term possibilities for Euro 1 cannot be ruled out.

BEHIND THE SCENES WITH HYUNDAI'S EURO 1 CONCEPT

For such a secret project as Hyundai's latest concept car, most inquisitive journalists might expect to find work progressing behind high fences, security cameras and slavering guard dogs.

But the unremarkable modern building on a business estate half an hour's drive from the centre of Frankfurt in Germany suited the need for secrecy perfectly - even the most streetwise scoop photographer would not have guessed at what was going on inside.

This was Hyundai's European Engineering and Research centre where a multi-national team were putting the finishing touches to Euro 1, a futuristic two-seater sports car utilising a great deal of Formula One technology in a street-ready package.

Under the project leadership of Sung-Woo Ko the sleek and swooping Euro 1 has been developed by a team including several English designers and engineers.

They have come up with a car dedicated to the pure sensation of driving - everything about the car from its 380 horse power turbocharged two litre engine to its unique steering-wheel-mounted six-speed sequential transmission is intended to bring the driver closer to the machine.

When we arrived to see this small, squat car it was still in several pieces as the engineering team, under the guidance of Anthony Dodworth - chief engineer and former MacLaren Formula One team materials expert - were still racing against time to have the car ready for its Geneva Motor Show debut.

Parts of the space-age body made from carbon fibre, aluminium honeycomb and epoxy cloth for lightness and great strength were still being gingerly lifted into place in order to protect the two-tone gold paintwork.

Engineers wrestled with the mass of wiring needed to operate the car's many electronic features - like an aircraft the throttle, massive disc brakes and several other minor functions operate on a "fly-by-wire" basis with no hydraulic or cable connections.

Chief designer David Cutliffe explained that everything about Euro 1 had been simplified in order to minimise distractions for the driver.

He said: "After Hyundai's series of concept cars - which lead to the stunning Coupe launched in 1996 - we decided to produce a car which would appeal to European tastes and would concentrate on providing the strongest possible driving experience.

"These days speed is not an issue - although Euro 1 will be blisteringly fast on the test track - but driving pleasure is what European tastes seek.  Direct contact between car and driver was what we set out to achieve. That is why the driver only has one dial in front of him or her.  The speedometer also doubles as a rev gauge with the face of the dial changing colour from yellow through blue to red as the revs rise.

"All the minor gauges and controls are in the door panels.  The windscreen on this open-top car can sit flat on the bonnet for the full wind-in-the-face feeling or can be hydraulically lifted at the driver's control to deflect the air-flow - but the driver still looks straight ahead over the top of the screen."

The twist-grip gear-change mounted on the steering wheel rim provides additional direct control - this development is a first in car design - for the driver.  The driver also sits in a fixed, integral seat and the steering wheel and pedals are adjusted electronically to provide perfect positioning.

Roadholding and handling is enhanced by the engine being mid-mounted behind the two-seat cabin off-set to the passenger side with fuel tank and battery behind the driver to give balance.

Although this is a concept car many of its features are likely to find their way into Hyundai mainstream products sooner rather than later.

Like all concept cars, Hyundai have built Euro 1 to explore new technology and new design avenues in the search to improve their volume models.

But Cutcliffe and Dodworth both agree that if interest is strong enough Euro 1 could be built in limited numbers in Europe - although the price would be high.

Cutcliffe said: "As it stands several of the features of Euro 1 would need to be modified in order to go into production.  The cost of building a production version to the same specification as this one-off would be prohibitive.

"But Euro 1 will be going to all the major European motor shows - including Birmingham later this year - and if the demand is there it would be possible to build the car in small numbers."

S.W.Ko added: "The reason Hyundai established the Frankfurt operation was to allow greater European influence into volume models and we have contributed to several production projects.

"This first concept car from Frankfurt gives a very strong indication of how we can influence product plans in the future - especially in the area of high technology.  Despite recent economic problems in Korea there is a great deal of interest from our senior management in Korea in a potential future for this car in Europe.  Europe is an increasingly important market for Hyundai and producing vehicles which will excite European customers is vital for our future."

CASHING IN ON THE EURO

Hyundai's Euro 1 concept makes it UK debut at the British Motor Show in Birmingham and highlights the thinking on both design and technology of South Korea's largest motor manufacturer.

The two-seater Euro 1 was, as its name implies, conceived, designed and built in Europe at Hyundai's new European Research Centre near Frankfurt, Germany. It was in Europe that Hyundai could find the ready-available specialists and technology to develop a research-orientated concept car, said Sung Woo Ko, manager of the Euro 1 project.

Two Britons headed the team, David Cutcliffe, as head designer, and Anthony Dodworth, a materials specialist who joined Hyundai from McLaren which helps explain some of the Formula One levels of technology.

"Anthony's experiences with McLaren meant that he not only knew which materials to use, but also where best to use them," said Mr Cutcliffe.

Euro 1 is "a car totally dedicated to the sensation of driving," he said. "The driver is in total control of this car and suffers no diversion from the business of motoring."

The six-speed clutchless transmission is controlled by a twist-grip integrated into the steering wheel. And, yes, it does work - it is mated to a production-based 380 bhp turbo-charged four cylinder engine with an electronic 'fly-by-wire' throttle. The Formula One similes continue with the brakes which are Alcon six-pot callipers with all-round ventilated discs.

The body is built of the latest high-tech materials: a mixture of carbon fibre, epoxy biaxial continuous fibre cloth and honeycomb sandwich inside which any Grand Prix driver would feel at home. "The result is a phenomenally rigid and strong monocoque tub which supports the rest of the structure," said Mr Dodworth.

The pedals and steering column are electrically adjusted for the ideal driving position and to protect against airflow there is a small hydraulically operated windscreen which raises just enough to deflect air over the occupants' heads. Even the handbrake is the fly-off variety much loved by hill climb and rally drivers.

Euro 1 was first seen at the Geneva Show last March since when Hyundai and the design team have been busy gauging reaction to the possibilities of a limited production run for such an exciting concept car. Even if Euro 1 itself doesn't make it beyond the research stage, the lessons learnt will be incorporated in future Hyundais across the globe.