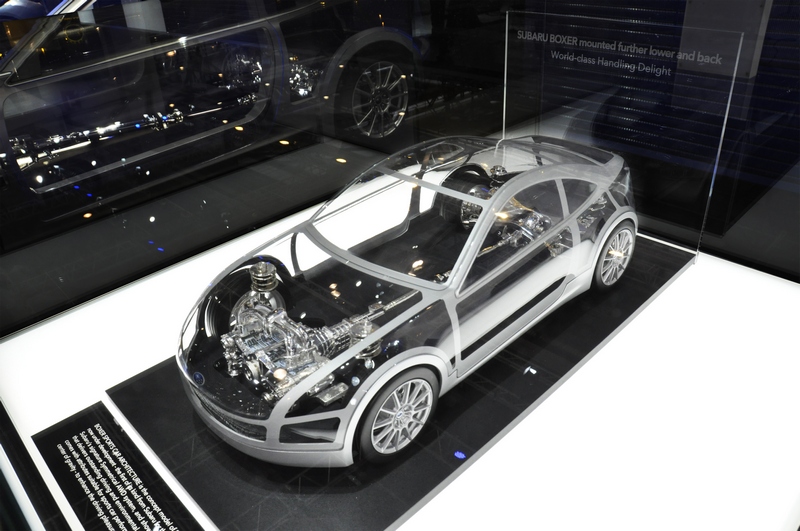 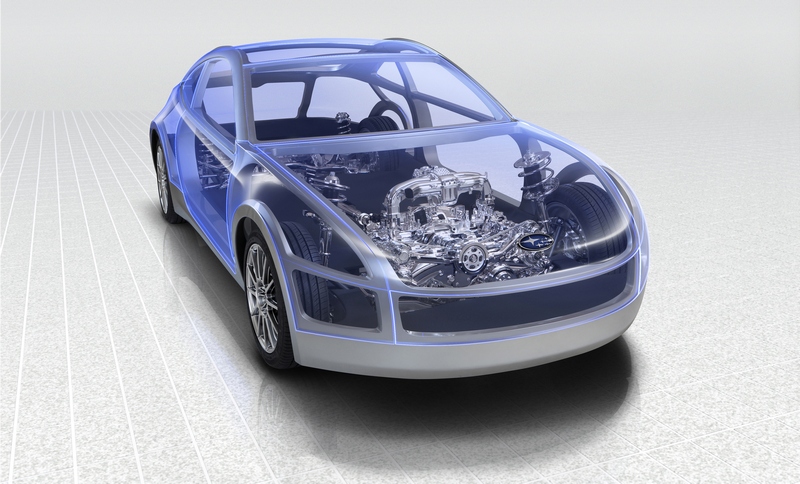 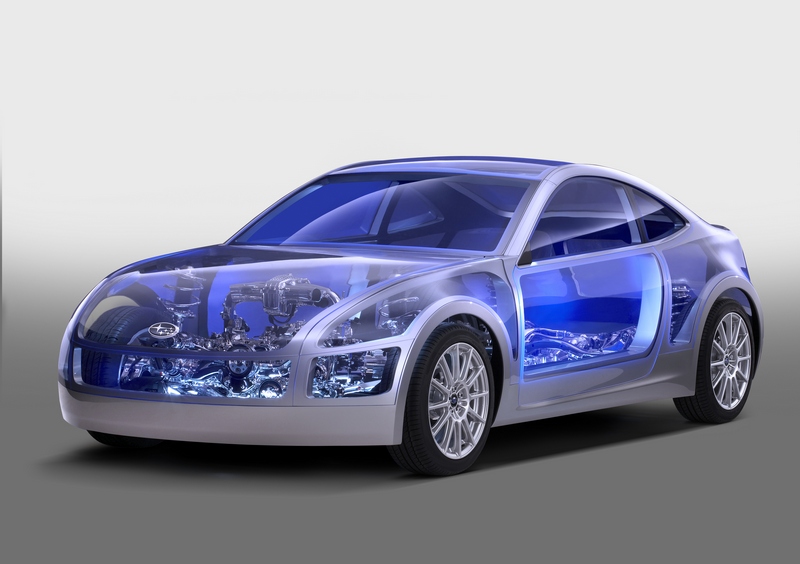 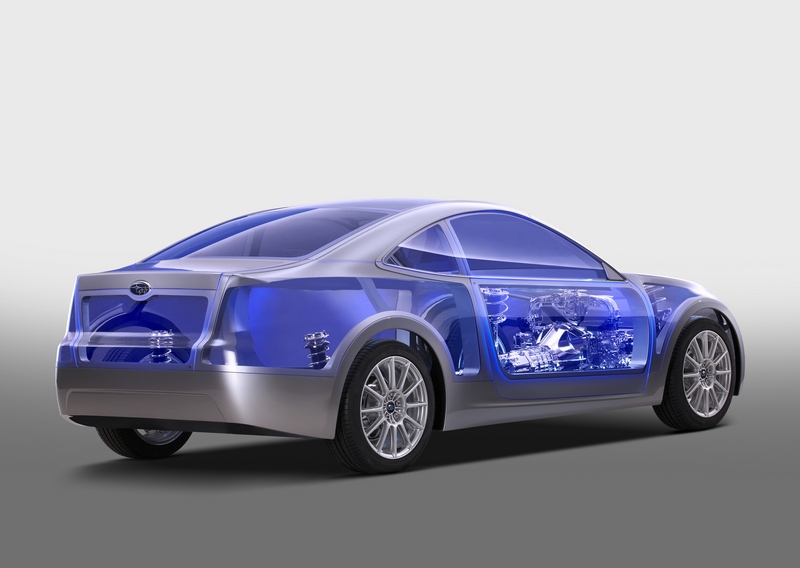 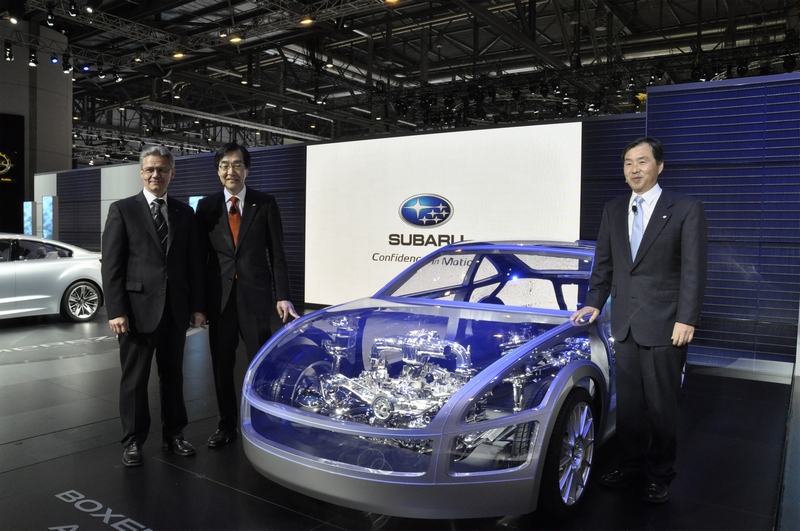 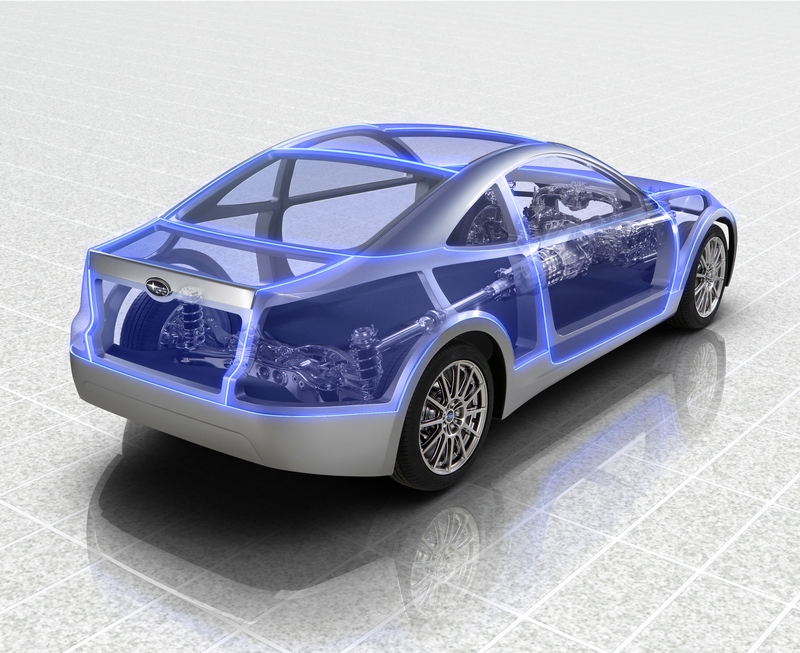 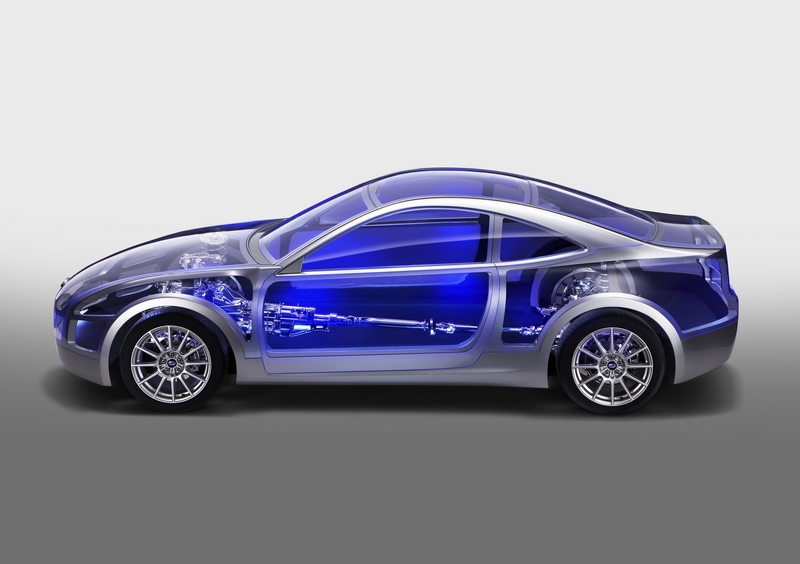 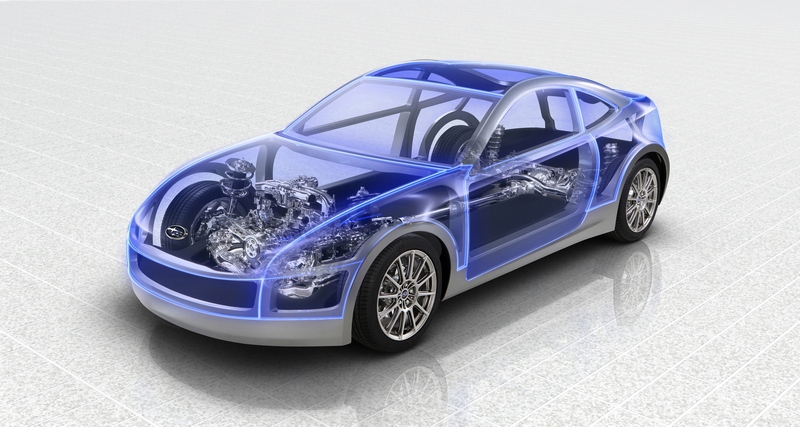 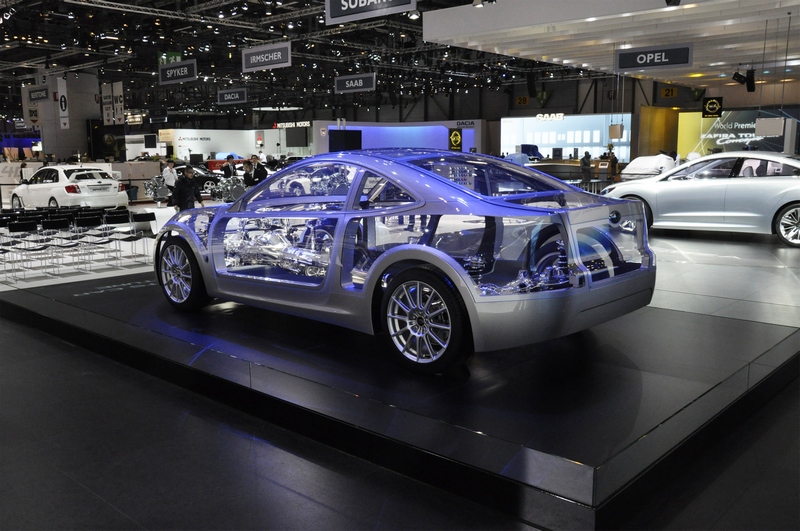 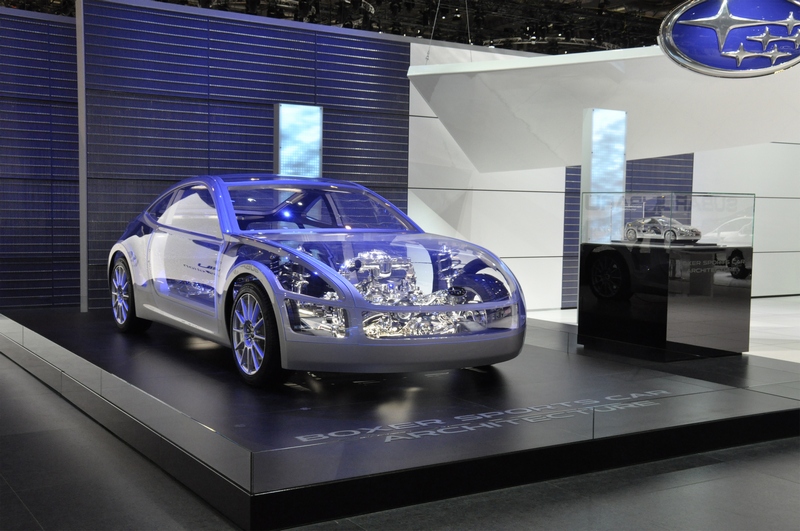 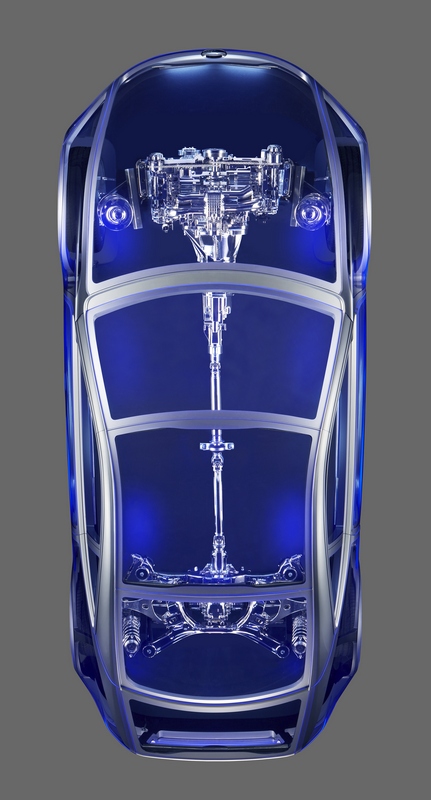 The Rear-Wheel Drive (RWD) Sports Car, which is currently under joint development with Toyota Motor Corporation (Toyota), incorporates into a new generation sports car with an ambition to provide driving pleasure to a wider range of customers. Thanks to its “front-engine, rear-wheel drive layout”, further lowered centre of gravity, compact and lightweight body and short wheel base, it delivers a new level of driving excitement with very unique crisp handling. The car will be the only mass-produced front-engine, rear-wheel drive sports car powered by a horizontally-opposed engine in the world, by making full use of an engineering masterpiece fusing Subaru’s sports car expertise with Boxer engine performance and Toyota’s experience with RWD sports cars.

This new car is rooted in both companies’ engineering philosophy. Subaru’s engineering excellence, renowned for providing “Enjoyment and Peace of Mind” to its loyal customers, has been applied to the car’s development. Subaru’s idea of a front-engine, rear-wheel drive layout that was already used in the “Subaru P-1”, Subaru’s first prototype passenger car, as well as the expertise acquired during the development of the “Subaru XT” or of the fully-fledged speciality coupe model “Subaru SVX” were also incorporated into the model’s development.

Ever since Subaru started building cars, Subaru’s objective has always been that of providing customers with enjoyment and peace of mind. Subaru’s development philosophy lies at the heart of each and every model ever produced, offering customers an assurance of driving “Confidence”. With such a consistent approach to the development of cars, Subaru has released a range of unique, innovative products to suit the requirements of customers at any point in automotive history, some of which include cars with Rear-Wheel, Front-Wheel and All -Wheel drivetrains.

Subaru developed the Subaru P-1, its first prototype passenger car, in 1954. To create a car that delivered a comfortable ride, Subaru determined that it needed to have an excellent suspension system and a lightweight, rigid body. To achieve this, a front-engine, rear-wheel drive layout was used for the drivetrain and chassis, and a full monocoque design for the body – the first of its kind in Japan. Powered by a 1.5-litre engine, the classic 4-door sedan Subaru P-1 prototype was produced in its dozens. Although it never made it to the market, the Subaru P-1 was considered the forefront of innovative Subaru engineering. Some of the pioneering features found in the Subaru P-1 included an independent wishbone suspension system at the front, and a proprietary lightweight and rigid, full monocoque body design developed with the aid of aircraft technology born from the very origins of Subaru. Expertise and development philosophies that were raised during this time blossomed into a range of innovative ideas and advanced technologies that would later be applied to the development of the “Subaru 360”, Japan's very own mini car for the public at large. These key concepts also found their way into the “Subaru 1000”, the earliest Front-Wheel Drive model to be powered by Subaru’s first Horizontally-Opposed Boxer engine, and other All-Wheel Dive (AWD) models used as the base platform for passenger cars. Indeed, these concepts continue uninterrupted to this day with the subsequent development of Subaru’s current distinctive crossover models.

Behind the new level of driving excitement and pleasure that the RWD Sports Car delivers is its new platform technology, built around Subaru’s key component – the Horizontally-Opposed Subaru Boxer engine. A new platform has been developed based on Subaru’s authentic expertise in order to extract the maximum performance potential required of the RWD Sports Car. The “BOXER Sports Car Architecture” represents a proposal of Subaru’s new definition of driving excitement.

At the heart of this Technology Exhibit is Subaru Boxer engine. It is its lightweight, compact and low centre of gravity that lends itself to the level of driving excitement that Subaru is aiming for, and is without a doubt the most suitable engine for the RWD Sports Car. The Subaru Boxer engine can be constructed of aluminium owing to its compact and rigid engine design, making for a much lighter power unit. Its low centre of gravity provides a high level of driving stability and remarkable handling. Since the piston’s opposing movements inherently counteract each other, no balance shaft is needed. This cancels out excess vibrations and gives the engine a sprightly, sporty feel at virtually any engine speed. Needless to say, the Subaru Boxer engine has certain underlying characteristics that make it suitable for such sporty driving.

In the BOXER Sports Car Architecture, Subaru’s Boxer engine, which originally features a low centre of gravity and optimum weight balance, is even lowered and set back further towards the centre of the chassis. This feature also offers a low-profile sports car silhouette with its lowered engine hood design, resulting in a lowered driving position. All these elements deliver excellent driveability, stability as well as handling delight.

Another important factor that enables the RWD Sports Car to deliver driving performance befitting of a Subaru is its chassis. Rather than simply developing a frame and body that focuses purely on speed, development has been conducted to produce a chassis that delivers Subaru’s authentic driving characteristics: a sporty driving experience, an overall enjoyable ride, and stable drivability with driver confidence. The result is that the tyres follow every subtle variation in the road surface and that it responds exactly to the driver’s input. The BOXER Sports Car Architecture does not depend solely on engine power output – instead it maximises the potential of this newly developed chassis to achieve the fundamental characteristics of a rear-wheel drive sports car by delivering sporty performance as driver and vehicle work in unison, as well as providing agile response afforded by its short wheel base. Subaru’s distinctive suspension setup has been used, incorporating struts at the front, and a double-wishbone layout at the rear, to provide outstanding stability and control.

When compared to other Subaru AWD models, the engine now sits even lower and further back in the engine bay. A lower centre of gravity, now located further toward the middle of the chassis itself, delivers a remarkable, natural feel when cornering, giving new level of driving excitement and handling delight to drivers. A short front overhang, matched with a shorter rear overhang reduces any yaw moment of inertia generated, and provides a higher level of stability and control, and handling performance of a pure sports car.

The RWD Sports Car’s platform technology adds a completely new package to complement Subaru’s existing AWD platform. This package will open Subaru’s renowned on-road performance to a broader range of customers. At the heart of this drivability lies Subaru’s engineering philosophy that constantly provides enjoyment and peace of mind. The “BOXER Sports Car Architecture” is a technical masterpiece that has been designed so that drivers can fully enjoy Subaru’s new approach to driving pleasure, with the full knowledge that they are constantly supported with the sense of confidence that only a Subaru can provide.