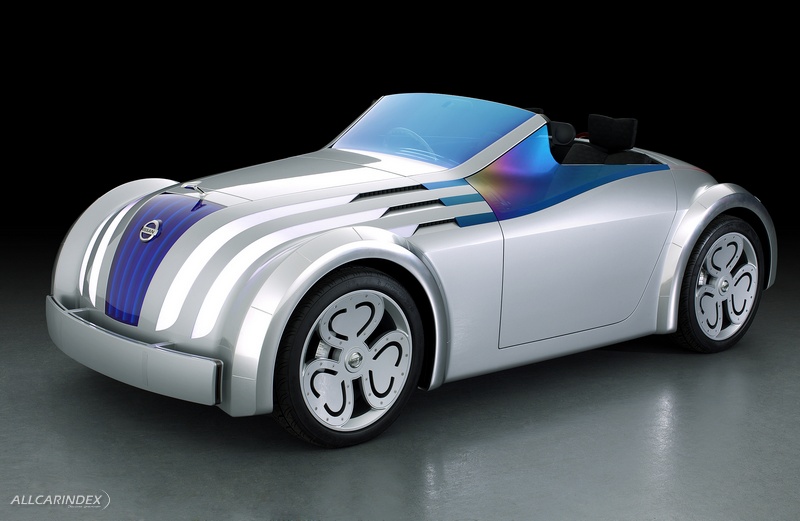 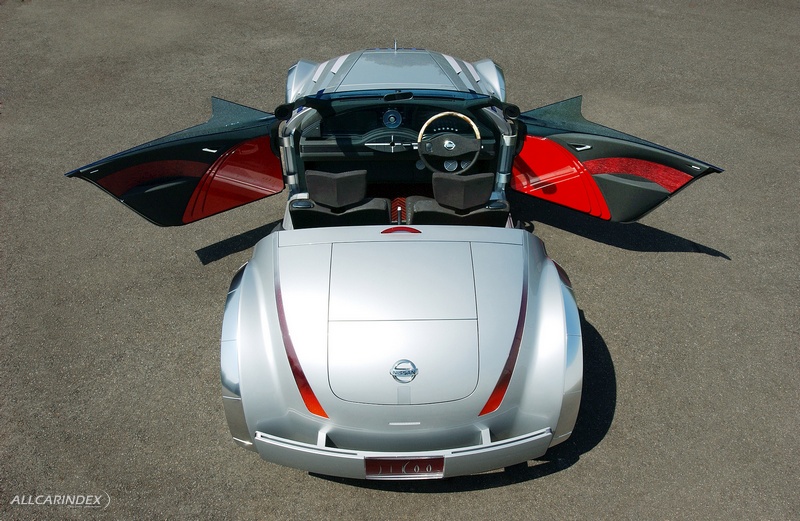 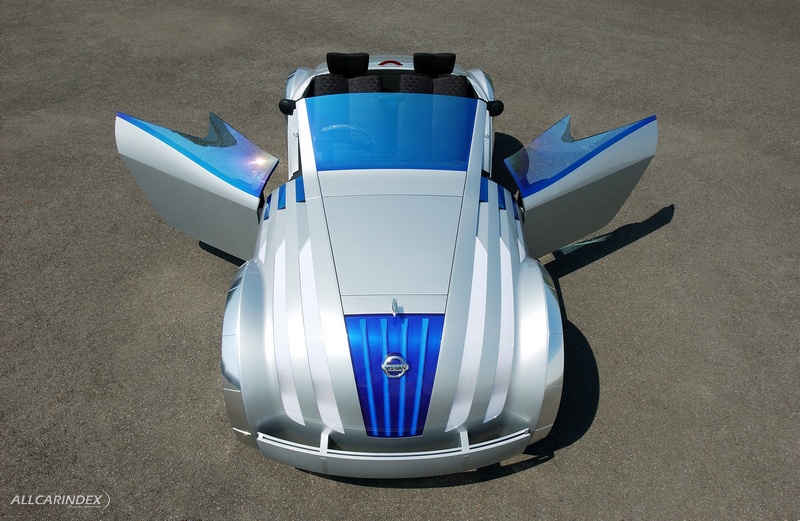 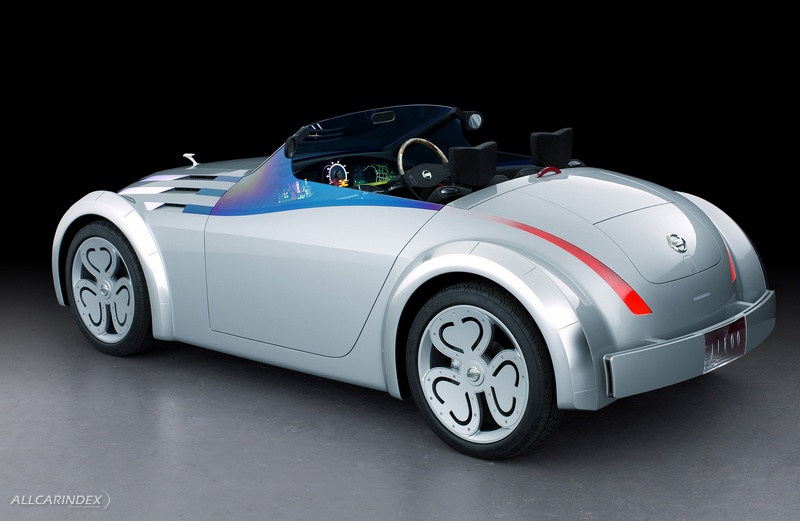 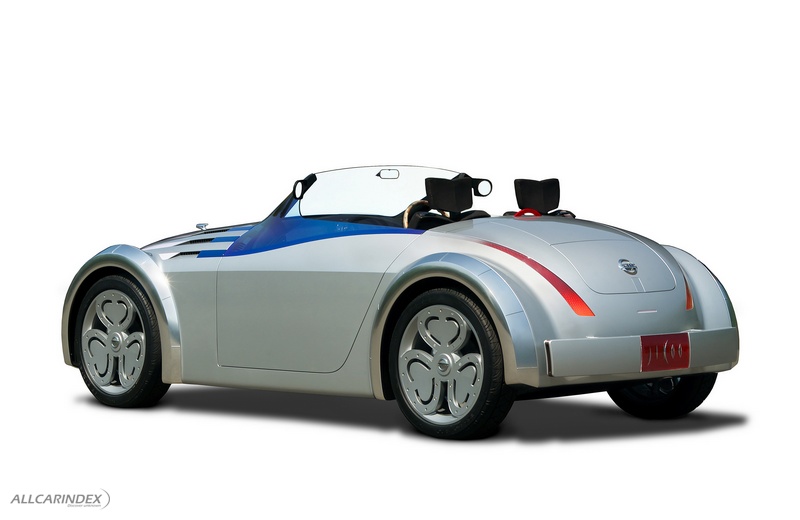 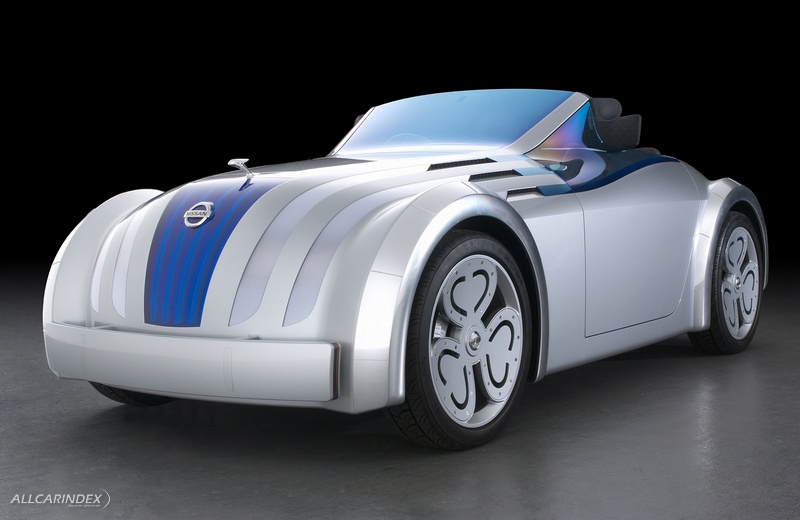 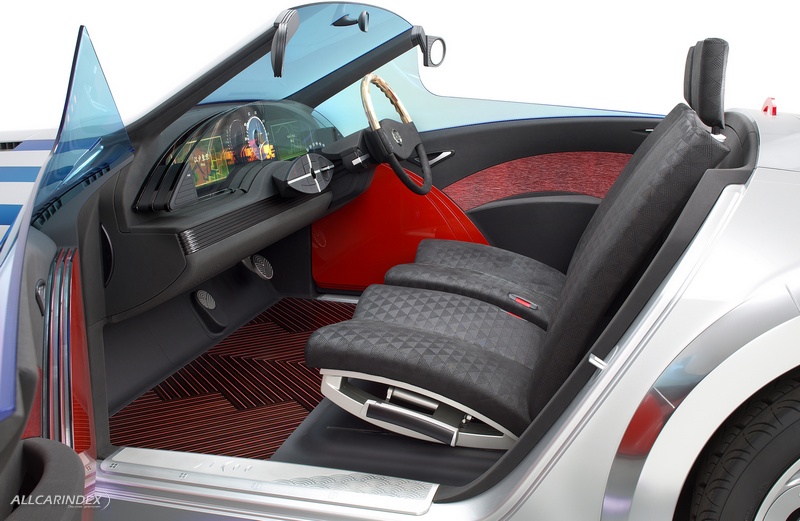 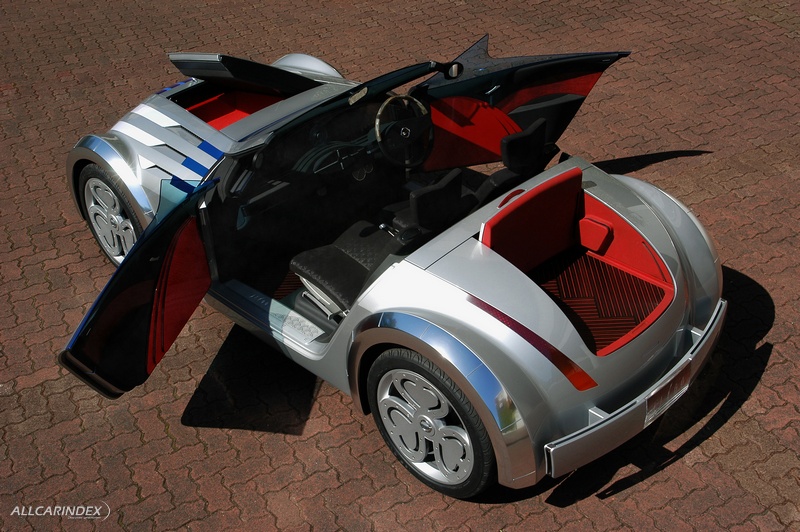 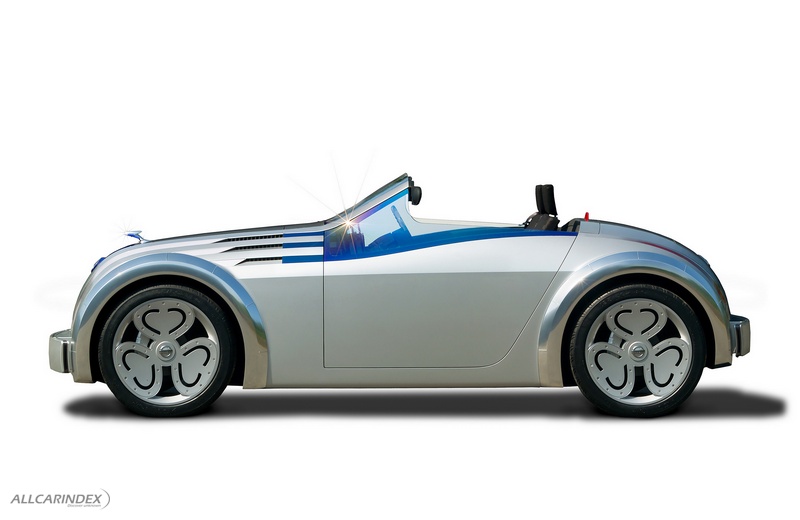 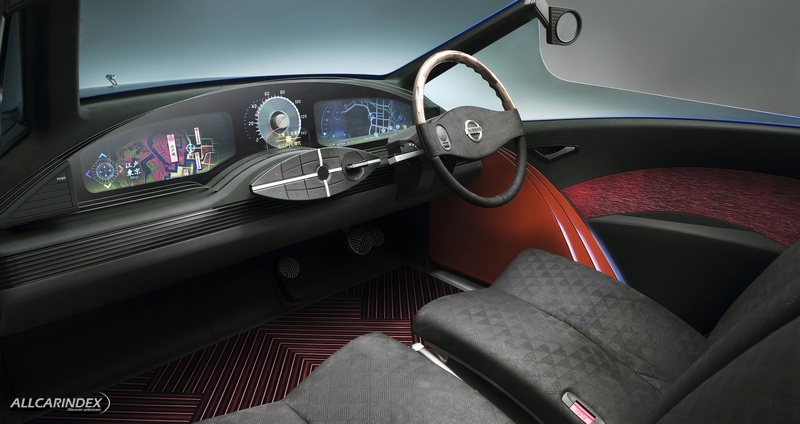 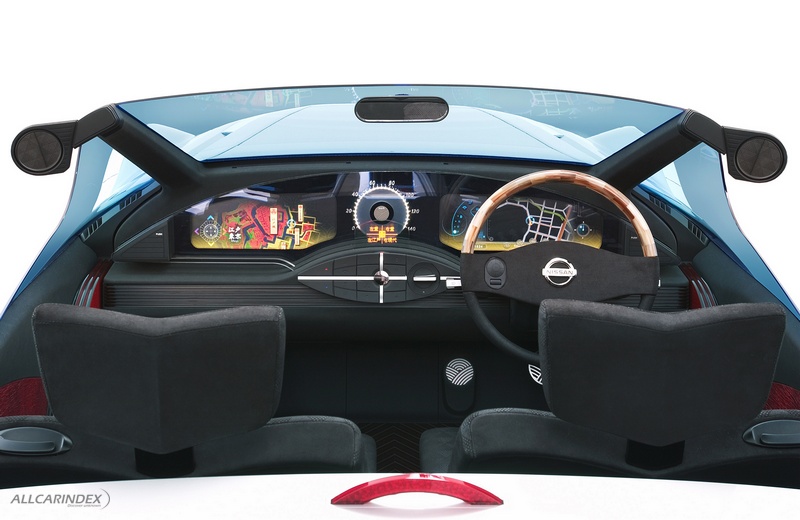 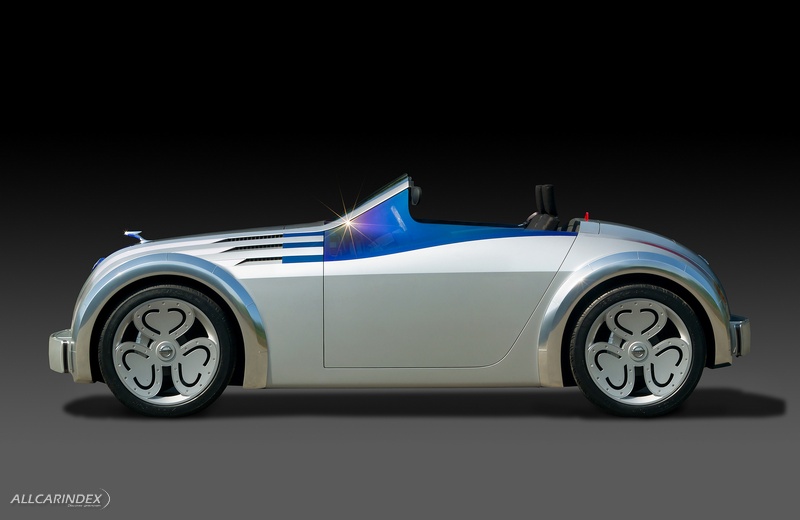 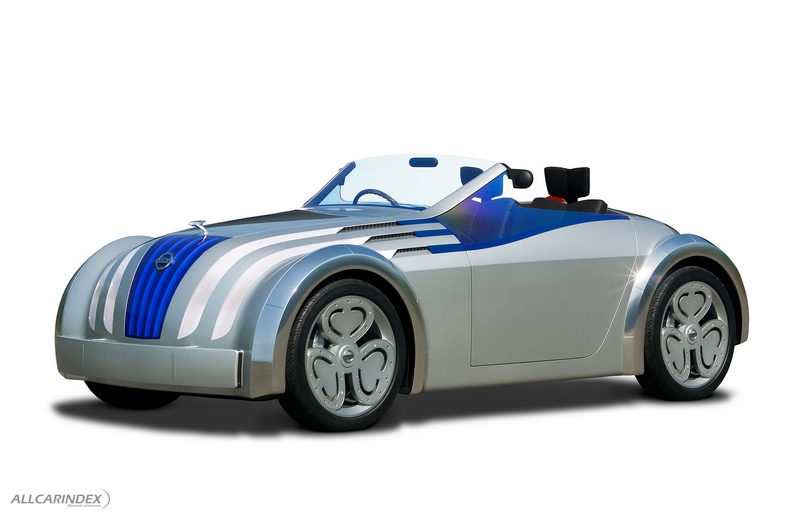 Jikoo is a small, prestigious open-top two-seater that expresses the spirit of challenge and sporty tradition that have distinguished Nissan since its establishment. The design motif was inspired by the Datsun Roadster that was rolled out in 1935 soon after Nissan was founded.

In the course of creating Jikoo, Nissan participated in the Tokyo Metropolitan Government's project to celebrate the 400th anniversary of the Edo Shogunate and focused attention on the tangible and intangible assets represented by traditional industrial arts handed down over the years to the present. Jikoo design boldly draws upon the techniques and materials passed on continuously from the traditional artisans of Edo (Tokyo's former name).

1. Nissan's 70-year-old spirit of challenge today and toward the future

The year 2003 coincides with Nissan's 70th anniversary and the 400th anniversary of the Edo Shogunate. Inspired by Nissan's heritage, Jikoo concept car has been created around the idea of combining advanced technologies and traditional industrial arts from two different historical and temporal worlds. While inheriting the compact size yet dignified character of the original Datsun Roadster, Jikoo gives expression to Nissan's sporty heritage and embodies Japan's traditional aesthetics and artisanship.

Jikoo has been executed in a minimal body size, with a dash of modern practicality added to the original form of the Datsun Roadster that debuted in 1935. Jikoo inherits the high and long nose, short deck, two-seater layout and open-top silhouette that distinguished the original model.

Jikoo also continues the Datsun Roadster's jump seat, which was a unique feature of roadsters in those days. On Jikoo it is called the "Karakuri Seat" after the concept of an ingenious mechanism that was developed as an Edo Period technology. In addition, the space afforded by the long nose is utilized for the "Karakuri Box," a two-level storage compartment that can be opened separately from either side of the car. On the inside, the upper and lower levels of the storage compartment are finished in ebony and an Edo fine pattern, respectively.

The design of the headlamps incorporates the expression of light transmitted through Japanese paper, as seen in the illumination of a paper-covered lamp stand or a paper-covered sliding door. The latest materials and machining method have been applied to the rear combination lamps and the front grille finisher to express the delicate yet distinct impression of Edo cut glass.

A metalworking technique of traditional silversmiths called "hammered metal" has been utilized in making the fenders to create the warm look of silver, which expresses harmony with the painted surface and the dynamic balance of the form.

(2) A cockpit loaded with advanced technologies in a stylish, urbane interior hinting at a new age

Inspired by the dashboard in the original Datsun Roadster, the instrument panel is rendered in a simple fan-shaped surface construction that incorporates cylindrical instruments.

Composed of three layers arranged longitudinally, the monitor is capable of displaying lots of information efficiently in a three-dimensional, easy-to-understand format. The monitor also incorporates new methods of expression, including the use of laser pointers for the meter needles. In addition to showing information related to driving, this multi-layer display also has an entertainment navigation function. Besides showing maps of Tokyo from the Edo Period to the present, the display also presents information about historical events, culture and traditions to provide a driving experience resembling a type of virtual time machine.

The operating controls are concentrated in the switch panel of the center cluster positioned in the pivot of the fan-shaped instrument panel. The display adopts modern interpretations of the pictographs seen in the family crests, store names and signboards of stores in the Edo Period.

An Edo technique of decorating with tortoiseshell has also been used to apply water buffalo horn to the steering wheel, resulting in a tactile sensation that feels pleasantly familiar to the hands.

The door trim finisher incorporating a thoughtful ground light is designed after the fine paper strings traditionally used for tying gifts. The trim expresses dynamic lines suggestive of flowing water and leads to the kicking plate decorated with a blue sea wave pattern. This is another example of the challenge to create a new design by making effective use of traditional methods of expression.

The floor is made of precious wood that is combined with a new material to give it slip-resistance practicality, in addition to its novel-looking appearance. In many other places as well, Jikoo interweaves traditional and new materials in an attempt to find new design discoveries. The lacquered door trim, supple lacquered leather seats and the black and vermilion tones of the interior trim adopt the chic and tasteful methods of expression seen in Kabuki costumes, called as "DA-TE" or "I-KI."

The challenge of continuing traditional arts and of being creative did not stop with the styling and hardware. The "Edo Navi" navigation system, linking the Edo and modern periods, provides a virtual time travel experience, allowing occupants to go back and forth as they wish between the past and the present while traveling in Jikoo.

The driver-side monitor supports the "Tokyo Navi" navigation system that displays maps of present-day Tokyo, while the passenger-side monitor incorporates the "Edo Navi" system that shows maps of the same areas during the Edo Period. Both the old and new maps change as the car moves along, enabling occupants to experience a sensation as if they were traveling through Tokyo in ancient times, that is, through old Edo. When the car passes by a place of historical interest, the story and events associated with it are presented in screen images and a voice narration, giving occupants a true feeling of continuity between the past and the present.