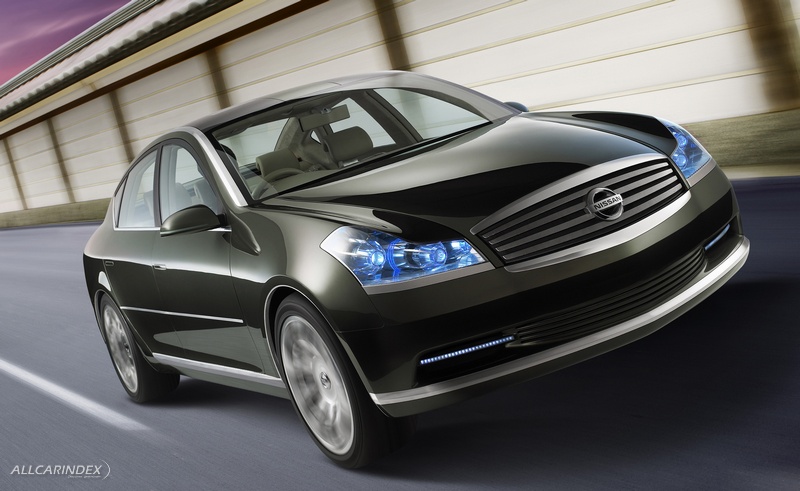 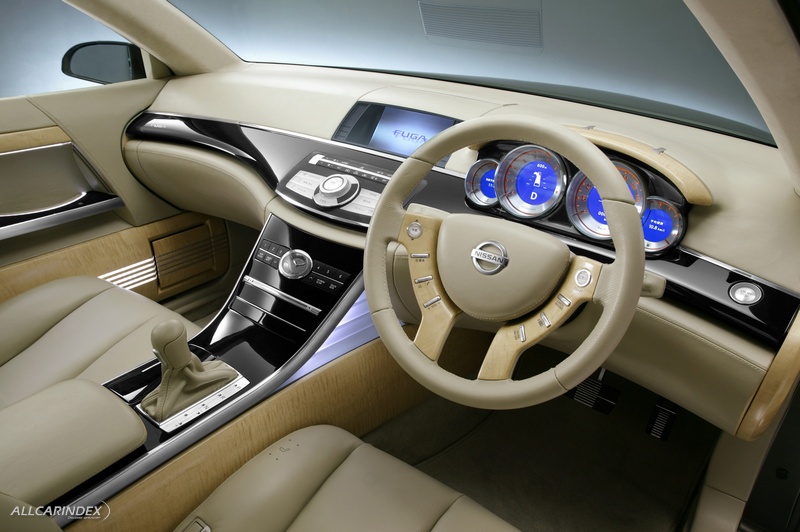 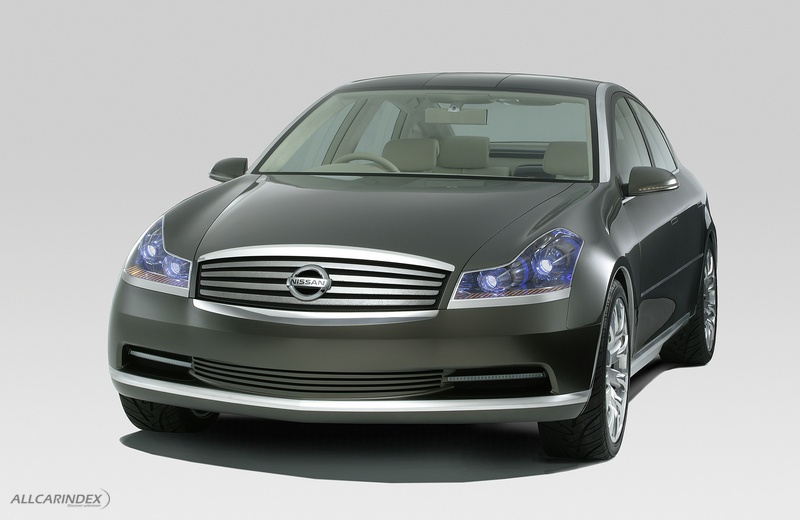 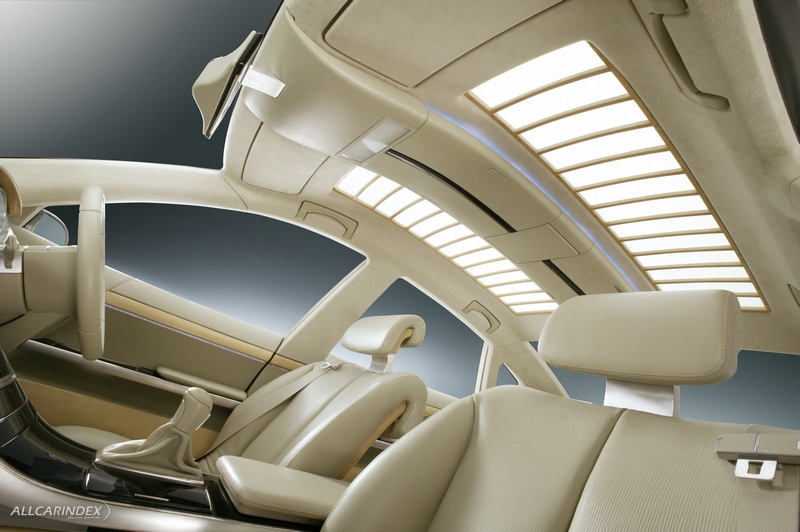 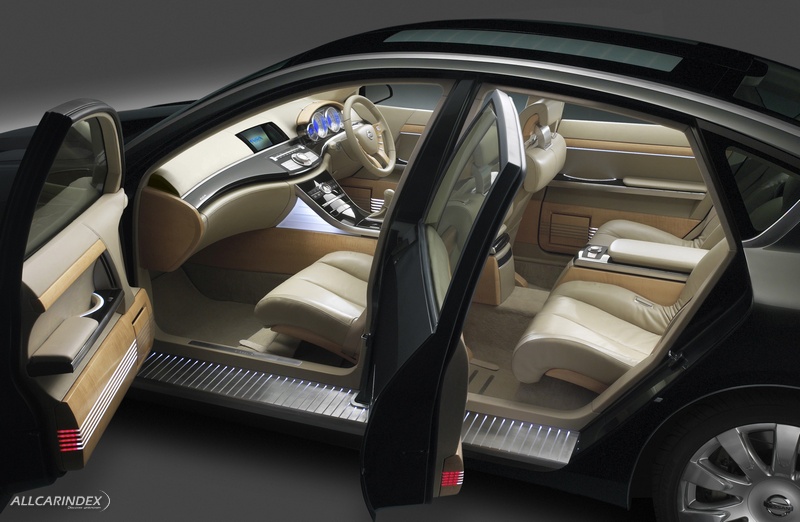 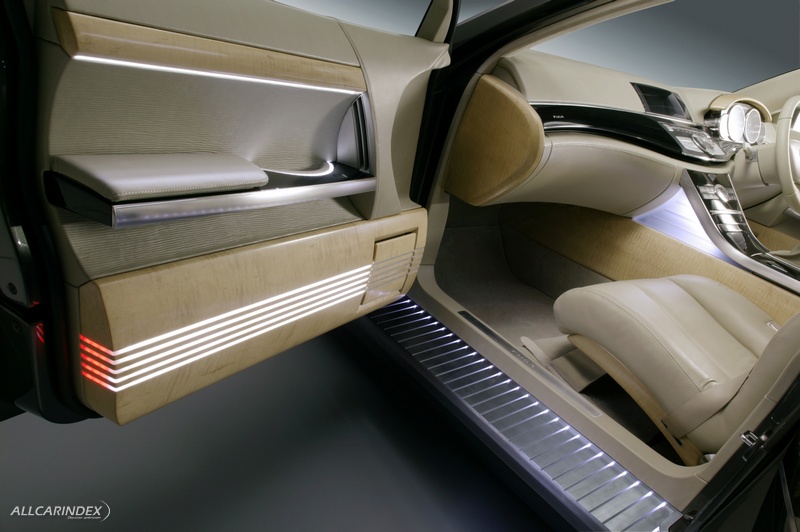 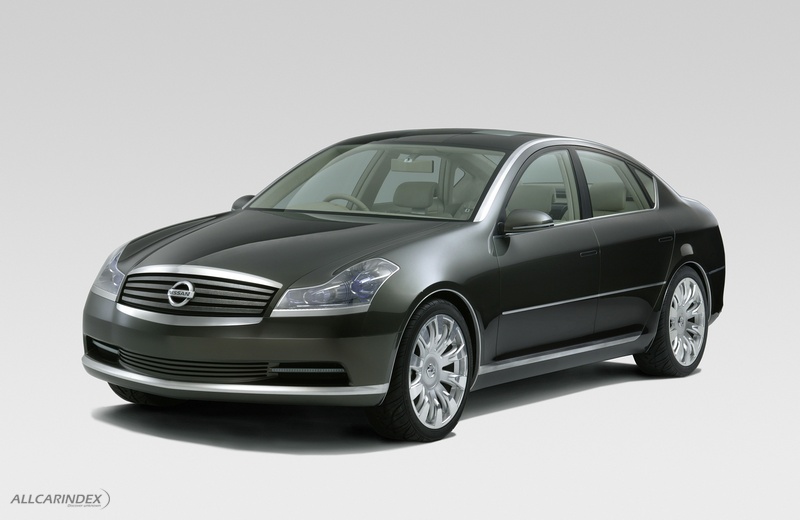 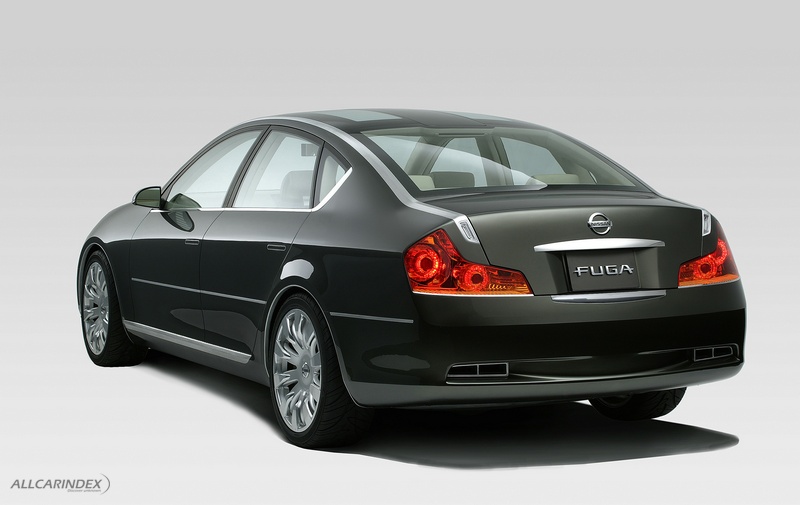 Through Fuga, Nissan proposes a new direction in luxury cars. Fuga's sporty exterior suggests its superb dynamic performance, while the interior offers roominess unimaginable in the conventional concept of a sedan.

The interior abounds in Japanese imagery and is unified in a modern design taste. From the moment users enter the car, they are enveloped in a fine-quality atmosphere that also engenders expectations of stellar driving performance.

Fuga adopts the FM (Front Mid-ship) Package for new FR-L platform that has been highly acclaimed on the Skyline and the Fairlady Z for providing supple ride comfort together with sporty driving performance. Fuga's design expresses an optimum blend of elements such as high-quality styling and superior aerodynamics while simultaneously achieving world-class safety performance.

1. A sporty exterior and an interior boasting roominess

Fuga's styling achieves the two elements of a sporty exterior and a roomy interior without tolerating any compromises. Extending the wheelbase while keeping the overall length in check has secured an ample interior length as the basis for a highly comfortable cabin. In addition to the tall overall height that provides ample headroom, Fuga also succeeds in expanding the legroom of the rear-seat occupants.

One element contributing to the car's sporty form is the gentle line traced by the high roof that allows outstanding ease of entry/exit. Many new design techniques were utilized for Fuga, including the creation of a beautiful flowing form by applying hairline-finished aluminum from the roof line to the trunk lid.

Positioning the tires at the four corners of the body works in concert with the large-diameter aluminum wheels to project a powerful image with a low center of gravity for superb driving performance. The lamps at both the front and rear are styled in an L-shape with two round rings on the inside, a technique that enhances the car's sporty, premium-quality atmosphere.

Fuga boasts interior spaciousness surpassing all other sedans in this class anywhere in the world. Even with 180-cm-tall occupants in both the front and rear seats, there is still plenty of room for the rear-seat passengers to stretch out their legs in relaxed comfort.

The interior design theme of "Japanese modern" expresses Nissan's concept of this motif and proposes a new style of luxury. While Fuga projects an active image with its highly dynamic styling and sporty driving performance, the overall tone of the interior has a unified image of Japanese modern, expressing the contrast of static and dynamic.

The basic color of the interior is pale green, which is coordinated with the subdued dark grayish green body color. The T-shaped center console and the door trim are decorated with unvarnished genuine wood of a white cypress color. This combines with the glossy lacquer-like painted wood panels to express the bold contrast of white and jet black, reflecting Japanese aesthetics. Formed with an integrated cushion and seatback, the seats are bathed in soft indirect light coming through the "Japanese paper-covered taste" shade of glass roof during day time and gentle indirect light through the side of roof console at night.

The FM Package has been steadily adopted on Nissan's rear-wheel-drive cars since it was first used on the new generation of the Skyline released in 2001. This FM Package adopted for Fuga organically integrates all the car's constituent elements around the front midship engine, including the chassis, suspension, passenger compartment and body. Fuga also incorporates an array of Nissan's latest technologies, such as the advanced version of the electric-powered Super HICAS system and an electronically controlled steering system, in pursuit of the highest levels of power performance, handling and stability anywhere in the world.

4. Cutting-edge IT and telematics technologies

Fuga incorporates a host of Nissan's newest IT and telematics technologies, including human-machine interfaces (HMI) that are simpler and easier to understand and operate, as well as other features combining excellent design with remarkable operating ease.

Located in the middle of the center console is the latest interface that embodies Nissan's proposals for a new trend in IT and telematics. Control switches are also mounted on the steering wheel to reduce the driver's workload substantially while providing multifunctionality. In addition, speakers are embedded in the rear-seat head restraints to facilitate the use of videophones in the rear seats, which is expected to be a widespread trend in the future.