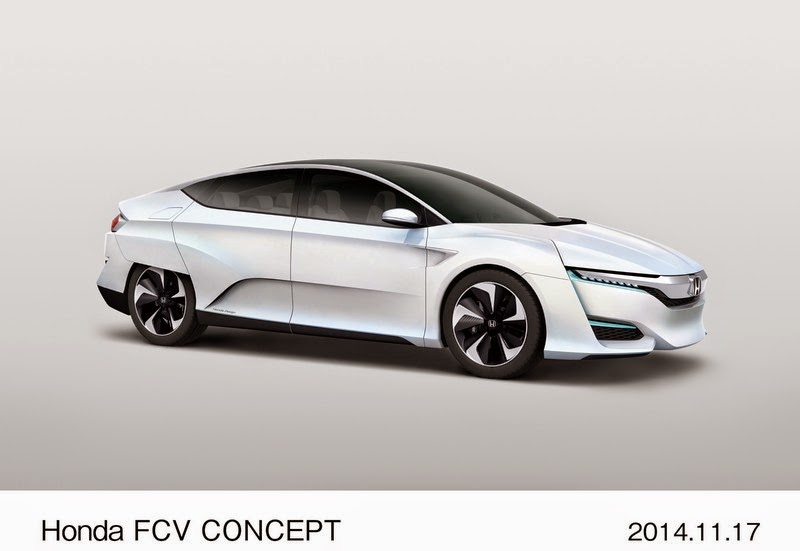 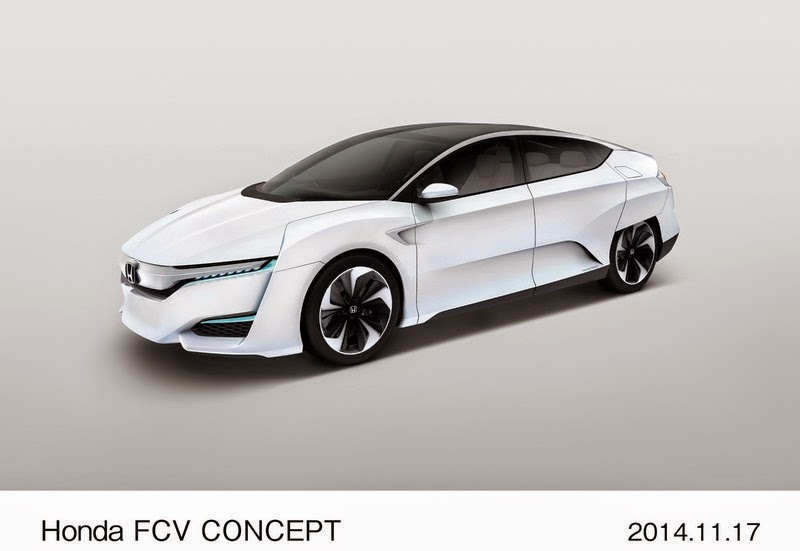 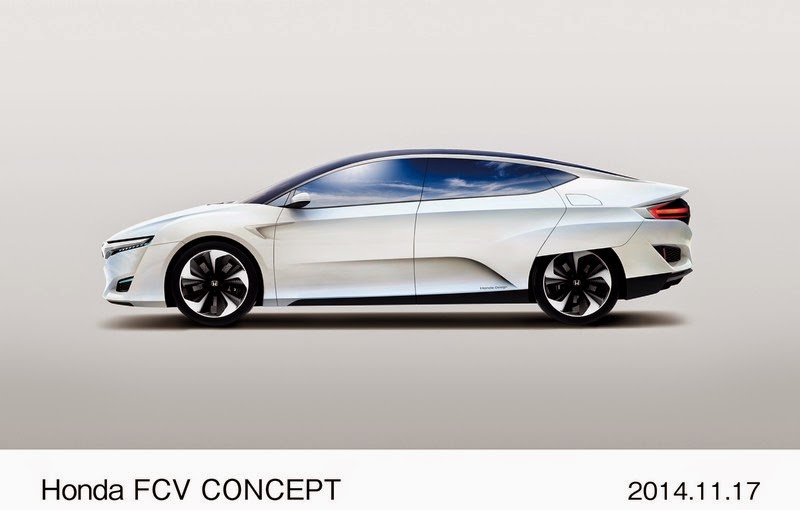 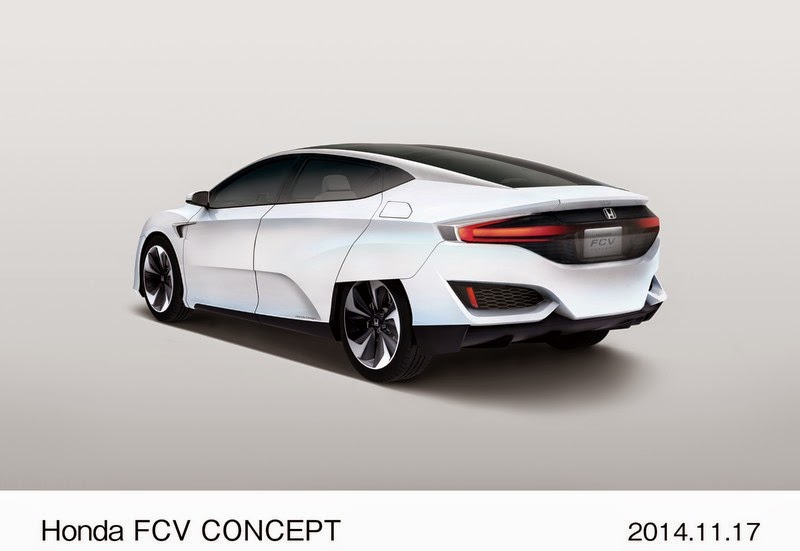 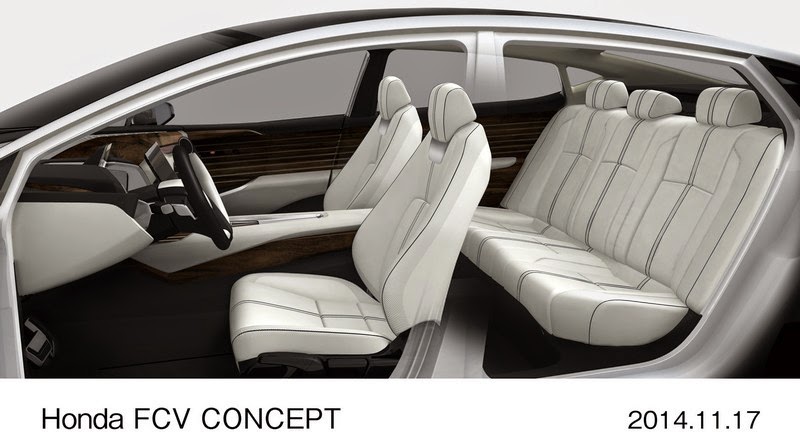 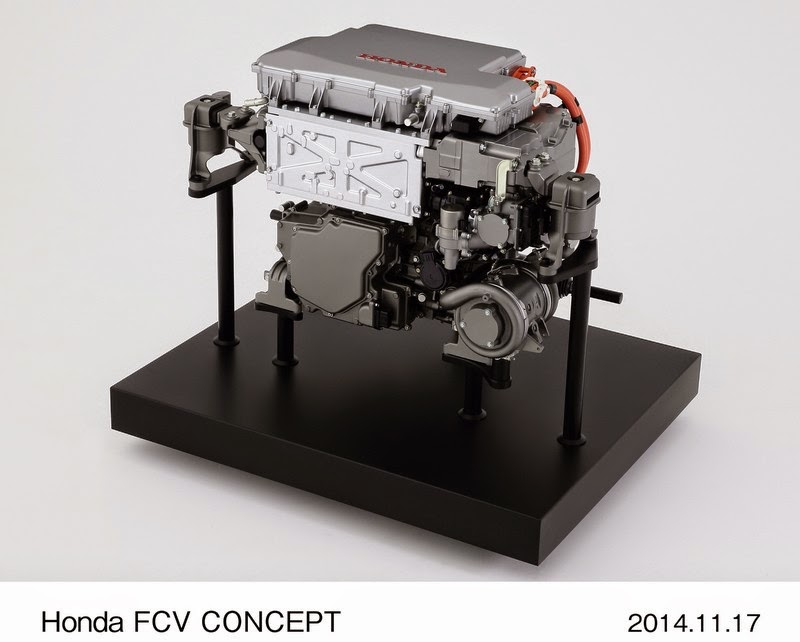 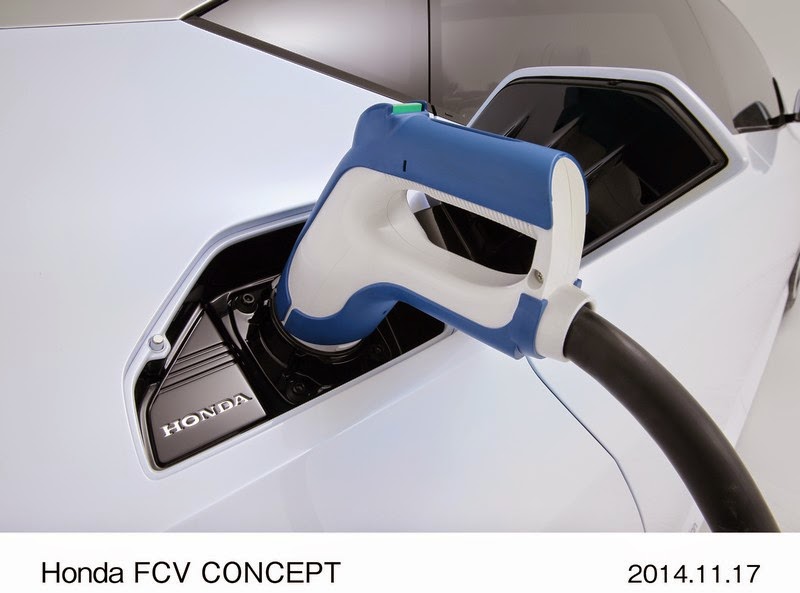 TOKYO, Japan, November 17, 2014 – Honda Motor Co., Ltd. today unveiled, for the first time in the world, the Honda FCV CONCEPT, a concept car for an all-new fuel-cell vehicle (FCV), and the Honda Power Exporter CONCEPT, a concept model for an external power feeding device that enables AC power output from the FCV with maximum output of 9 kW*1. The all-new FCV that will be based on this concept model is scheduled to go on sale in Japan by the end of March, 2016 and subsequently in the U.S. and Europe. In addition to the FCV and external power feeding device, Honda will further promote the application of the Smart Hydrogen Station (SHS), a packaged hydrogen station unit that adopts Honda’s original high-differential-pressure electrolyzer. In this way, Honda will work toward the forthcoming hydrogen society under three key concepts – “generate,” “use” and “get connected” – and strive for the early realization of a CO2-free society.

Honda views hydrogen as a high-potential, next-generation energy carrier due to the fact that hydrogen can be generated from various energy sources and is easily transportable and storable. Based on this view, Honda has been positioning the FCV -which uses electricity generated through the chemical reaction of hydrogen and oxygen as a power source for the motor – as the ultimate environmentally responsible vehicle and taking a proactive approach to the research and development of FCVs since the late 1980s.

In 2002, the Honda FCX became the first*2 fuel cell vehicle in the world to be certified by the U.S. Environmental Protection Agency (EPA) and the California Air Resources Board (CARB). With these certifications, Honda began lease sales of the Honda FCX in Japan and the U.S. In 2003, Honda developed the Honda FC STACK, the world’s first*2 fuel-cell stack able to start at below-freezing temperatures. Then in 2005, Honda became the world’s first*2 to begin lease sales of FCVs to individual customers in the U.S.

In 2008, Honda began lease sales of the FCX Clarity, an unprecedented fuel-cell vehicle that offers not only the ultimate in clean performance, but also new values and the appeal of a car, including an innovative sedan-type package and driving feel that is far beyond conventional vehicles.

As demonstrated by this track record to date, Honda has been a leading company in the field of FCV development, amassing real-world data through lease sales in Japan and the U.S., including actual feedback from individual users and also driving data from the vehicles.

The Honda FCV CONCEPT is a concept car for Honda’s next-generation FCV, a successor model to the FCX Clarity, with which Honda strives to achieve a further improvement in performance and a reduction in cost. The newly-developed fuel-cell stack installed to this concept car is 33% smaller than the previous fuel-cell stack and yet realized output of more than 100 kW and output density as high as 3.1 kW/L, improving the overall performance by approximately 60% compared to the previous version of the fuel-cell stack. Honda’s next-generation FCV will be the world’s first*2 FCV sedan with the entire powertrain, including the downsized fuel-cell stack, consolidated under the hood of a sedan-type vehicle. This powertrain layout enables a full cabin package that seats five adults comfortably and also will make it possible to evolve this vehicle into multiple models in the future when the more widespread use of FCVs requires enhanced choices for customers.

The Honda FCV CONCEPT is also equipped with a 70 MPa high-pressure hydrogen storage tank that provides a cruising range of more than 700 km*3. The tank can be refilled in approximately three minutes*4, making refueling as quick and easy as today’s gasoline vehicles.

Striving to make a contribution to the forthcoming “hydrogen energy society,” Honda will continue taking on new challenges in the area of hydrogen technologies including the Smart Hydrogen Station, FCVs and external power feeding devices.

*3 - Honda internal measurement in JC08 mode and use of hydrogen station with charging pressure of 70 MPa The cruising range may be shorter depending on conditions of usage (ambient temperature, traffic, etc.) and how the vehicle is driven (sudden starts, use of airconditioning unit, etc.)

*4 - Time required for refueling will vary depending on conditions.