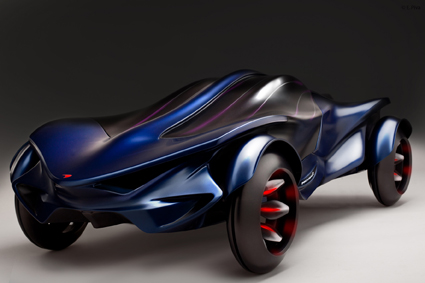 Alongside the life-size model, IED Turin presents, at the stand, BIO RENOVATIO and TOROK, concept cars in 1:4 scale, thesis projects of the students of the three-year course in Transportation Design – car design a.y. '09/10, constructed in cooperation with McLaren.

The project focussed on the realization of a hybrid mid-engined open-roof 4WD sports car with passenger cell, for two persons, constructed using the McLaren carbon fibre MonoCell. Adopting a conceptual approach, the students considered a potential vehicle to be launched on the market in 2020: a car able to combine supremacy on the tracks, driving emotions and McLaren’s characteristics both on and off the road.

The students who took part in the project worked under the supervision of Fulvio FANTOLINO,Coordinator of the Three year post-diploma Course in Transportation Design – car design.

TOROK is a project by: Michel DI MARCO, Andrea INVERNIZZI and Shariq VIRANI