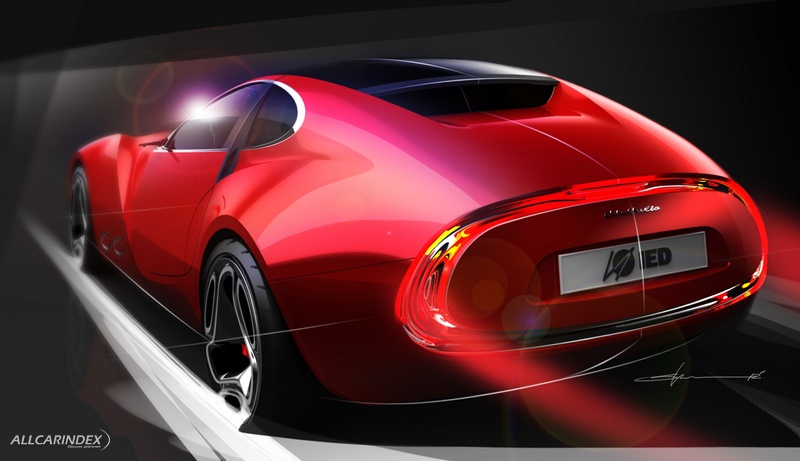 The soul of the past. The energy of the future.

Call it Cisitalia 202 E, the name of a challenge: to redesign the sport coupé that marked a milestone in the history of Italian motoring. The spotlights are focussed on the 82nd Geneva International Motor Show and the Istituto Europeo di Design of Turin which, participating for the ninth time, showcases the 202 E, an enthralling style exercise based on the study of the glorious Cisitalia 202. With this project of the Master of Arts in Transportation Design - work experience a.y. '10/11, IED Turin has redesigned the mythical dream-car, the Cisitalia 202, intended originally to be just a car but which has gradually become an icon of design Made in Italy and of the elegance of the period after the 2nd World War in Italy.

Acclaimed by Henry Ford II as ”the most beautiful Italian car I have ever seen”, the small Gran Turismo was commissioned in 1947 by Piero Dusio, founder of the Cisitalia brand. Designed by engineer Giovanni Savonuzzi, the car was styled by personages such as Battista “Pinin” Farina, Castagna and Vignale. Cisitalia was subsequently revived in Argentina by Alberto Díaz Lima and Carolina Dusio, daughter of the founder Piero, who focused her attention specifically on reproducing the famed Sport Coupé, now on show at the MoMa in New York as "sculpture in movement".

The original 202 was powered by a small 1089 cc, 4-cylinder in line engine with a power output of 55 bhp at 5500 rpm and a speed of 165 km/h thanks to a weight of just 780 kg. As its name suggests, the 202 E – where E stands for evolution - was intended to be a modern reinterpretation based on Cisitalia first 1947 proposal. World-premiered at the Geneva Show, the lines and shape of the concept express typical refined, creative design “Made in Italy”, with an eye on the future of the brand.

The concept faithfully reflects the design of the historic vehicle, with dimensions and power aligned with modern times. A very low centre of gravity and compact volumes make this an enthralling, exciting car to drive. The nose and rear recall the original grille and spare wheel cover through integration of various functions in the hood-trunk division lines and in the head/tail lights. The style proposed by IED car designers echoes the sleek, uncluttered look of the original icon, transforming a modern proposal into an authentic, refined interpretation of the past.

“To encourage our students to overstep their limits – declares César Mendoza, Director of IED Turin – they must have the possibility of developing exciting, ambitious projects. What greater challenge than to redesign one of the most beautiful cars in the world? An extraordinary opportunity. Taking advantage of this occasion and with the support of Cisitalia and the commitment of lecturers and coordinators, we have achieved outstanding results not only with regard to the life size model of the vehicle but in all the projects proposed, making it extremely difficult to single out that to be presented in Geneva”.

“When the Istituto Europeo di Design – states Alberto Díaz Lima, Cisitalia Holding SA President and CEO - asked me to participate in this project, I never imagined it would be such a fantastic experience. It has been a real pleasure for me to share such an ambitious restyling with the IED and the students of the Master course. The presentation at the Geneva Motor Show is a further incentive for the Cisitalia marquee and for its future business plans.

The Cisitalia 202 E is the offshoot of the work of eleven students of the Master course coordinated by Luca BORGOGNO, Pininfarina Lead Designer and Luigi GIAMPAOLO Maserati Designer. The Master of Arts in Transportation Design – work experience is a highly qualified, two-year course intended to train competent automotive professionals able to approach the world of work through a constant rapport between companies and style centres. The concept is, in fact, the outcome of a process comprising various phases of assessment that simulate a real working situation: starting from the eleven design proposals, all the models have been reproduced in clay in 1:4 scale, subsequently selecting that which complied most effectively with the initial brief of the company. The entire class, divided into groups, then worked on the project selected to complete all the internal and external details of the concept.

The Cisitalia 202 E stems from an idea of: Chen CHIN-HSUAN (Taiwan)

The Cisitalia 202 E has been developed with the cooperation of: Pirelli and OZ Racing Alongside the life-size model, IED Turin presents two thesis projects of the three-year post-diploma Course in Transportation Design – car design, academic year '10/11 which participated in the Ferrari World Design Contest: the Ferrari INEO by Victor URIBE CHACON, Sabin Florian MELINTE and Francesco BINAGGIA, and the Ferrari IMPRONTA by Stefano BUONOCORE, Carlos TIUSABA and Alessio GALLO. In their respective proposals, the students were called upon to design and engineer the Ferrari of the future, a car able to reconcile opposed requirements: hyper-light and hyper-fast, hyperecologic and hyper-performing, hyper-technological and hyper-intuitive. A compact vehicle, visibly light, with a dynamic, sleek profile and an aggressive but well-balanced look in line with Ferrari’s heritage and inspired by its Formula 1 values.

At the Ferrari World Design Contest, IED Turin carried of the second prize with Xezri, now at the Ferrari Style Centre of Maranello, designed by Samir SADIKHOV.

The students who participated in the Ferrari World Design Contest worked under the supervision of Fulvio FANTOLINO, Coordinator of the three-year post-diploma course in Transportation Design - car design.

The Cisitalia 202 E, Ferrari INEO and Ferrari IMPRONTA were constructed by: CECOMP IED Turin wishes to thank ABET Laminati for its cooperation.