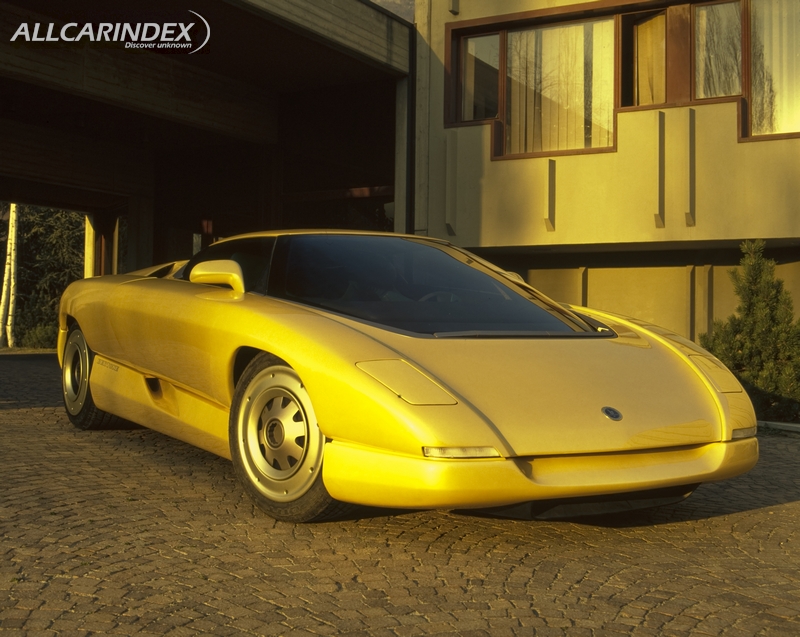 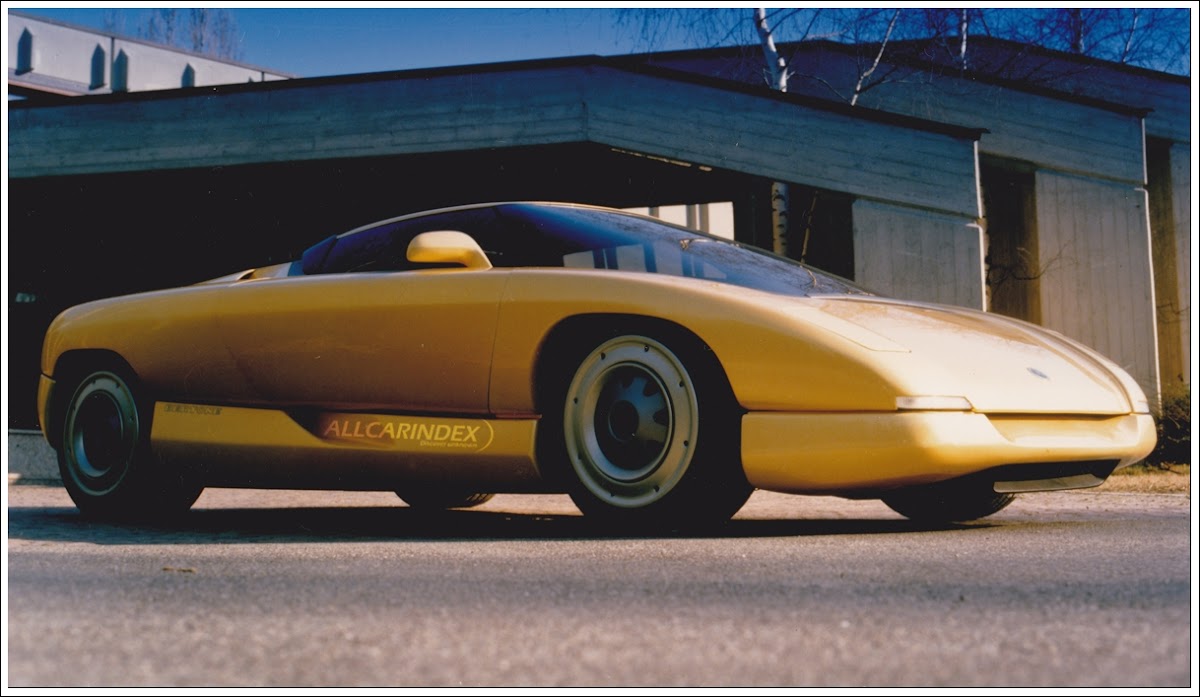 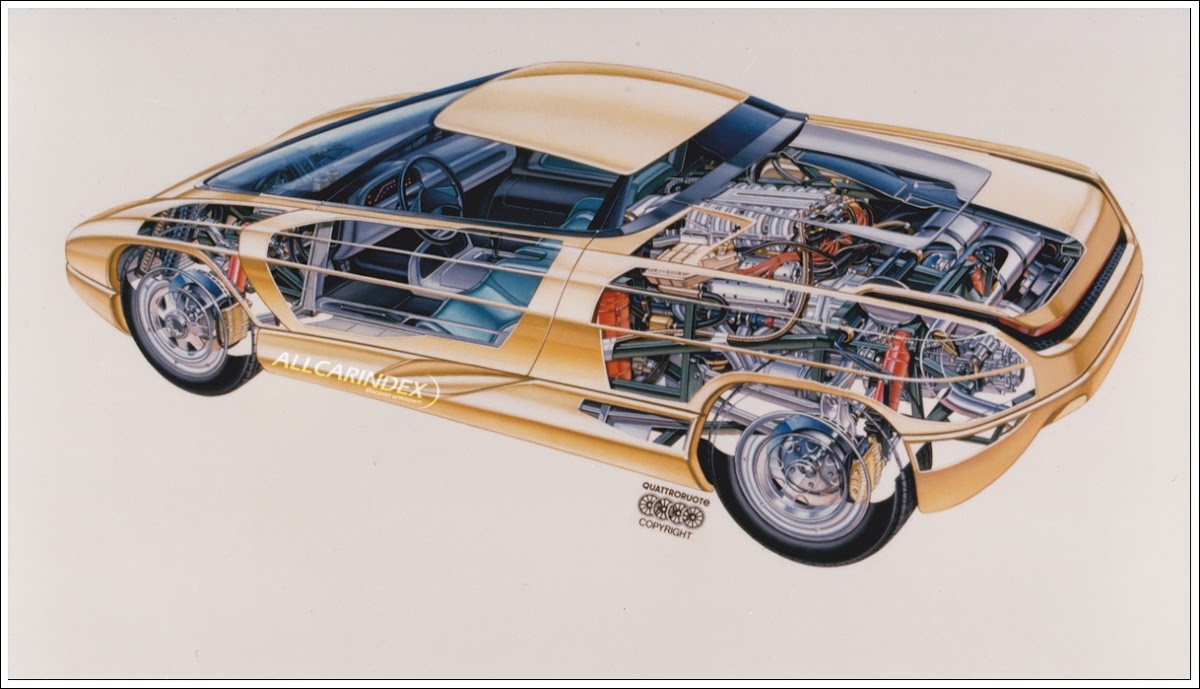 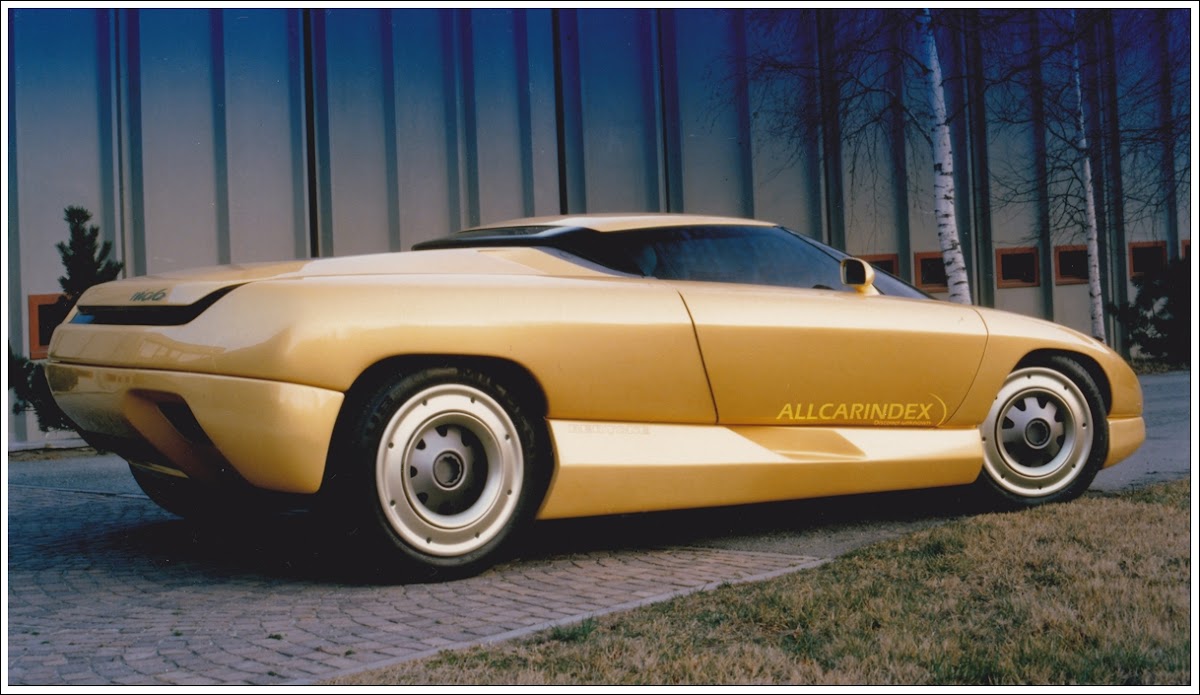 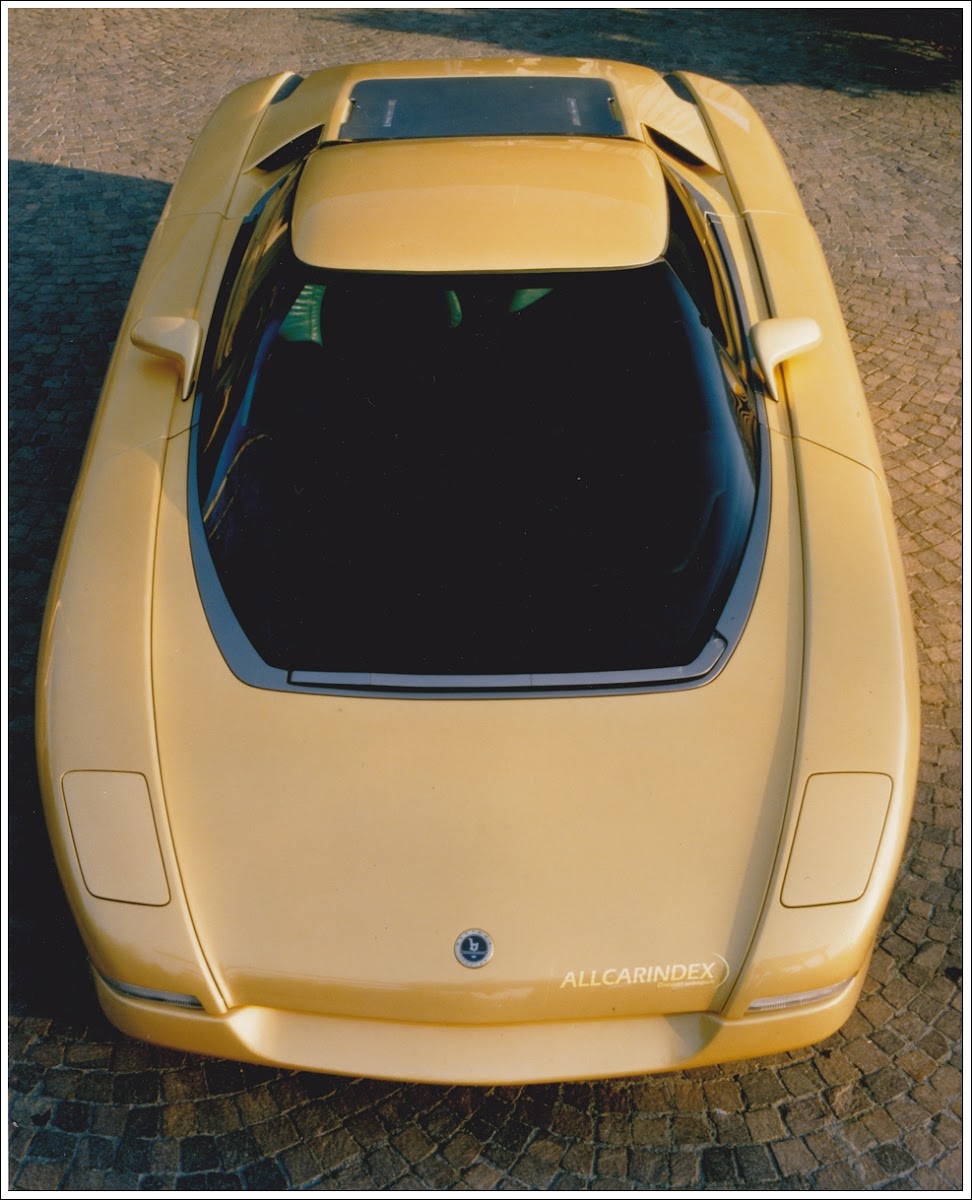 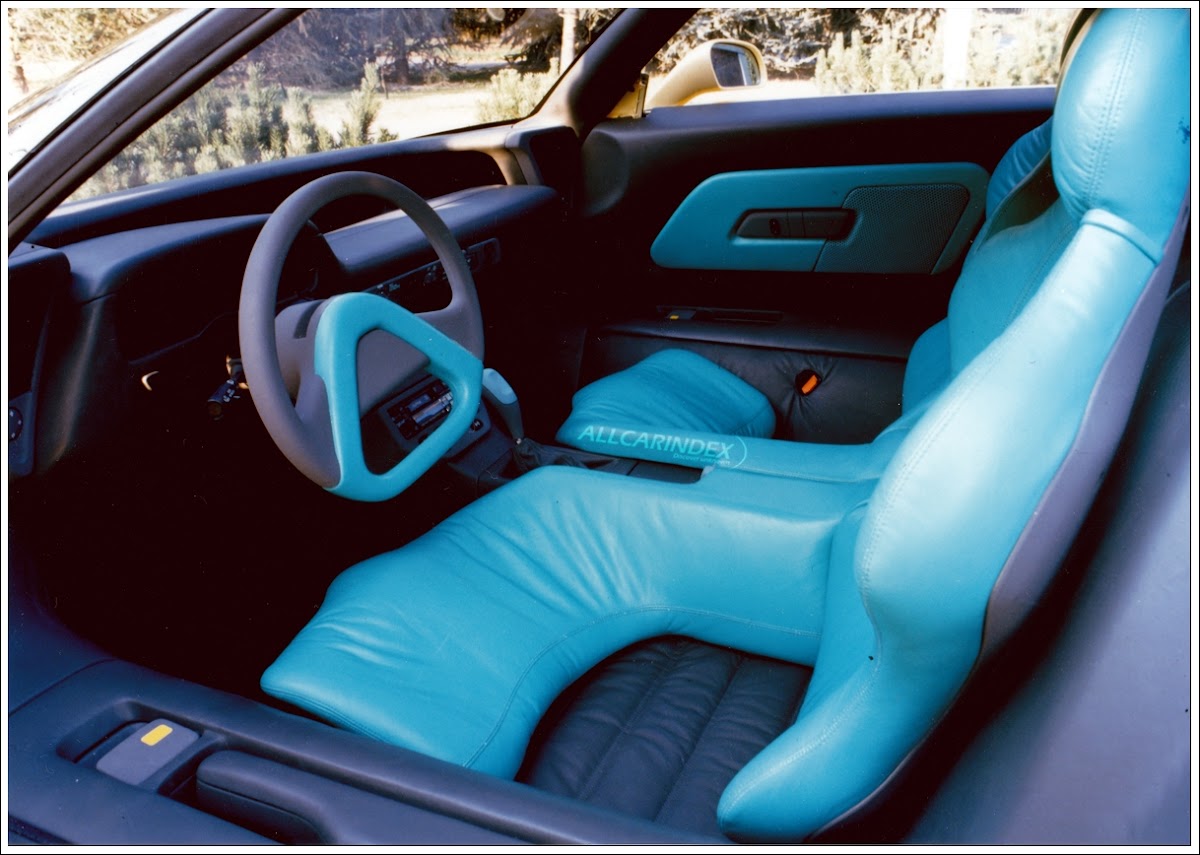 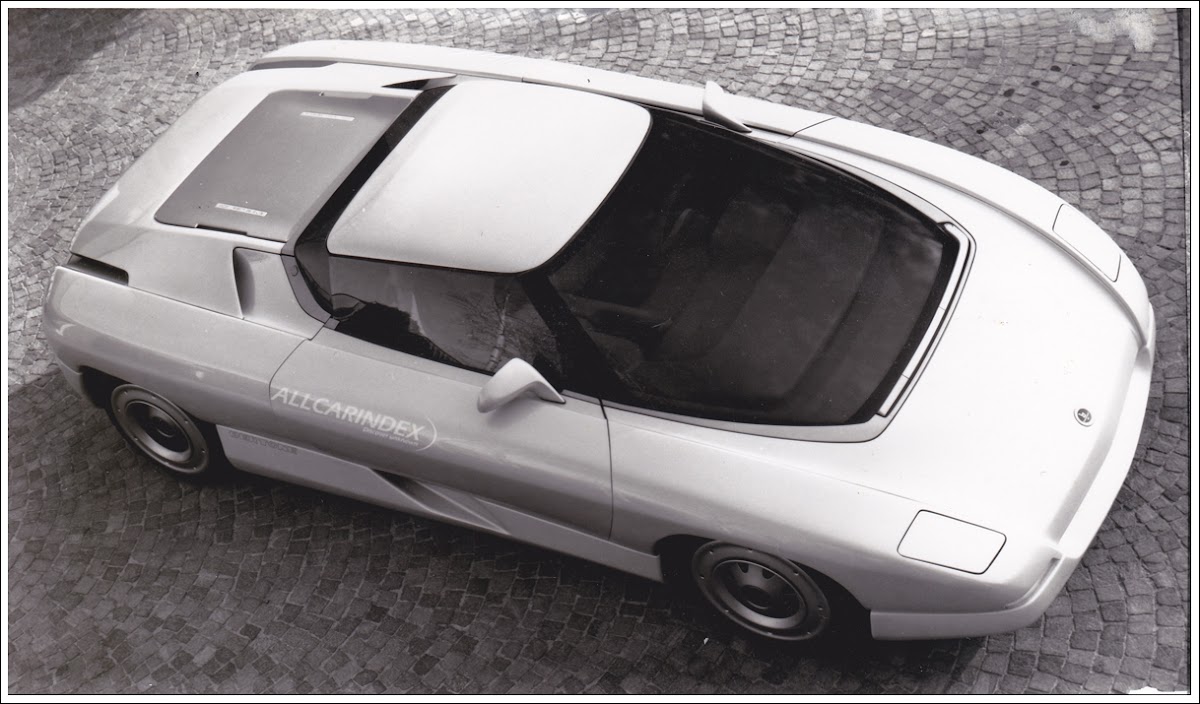 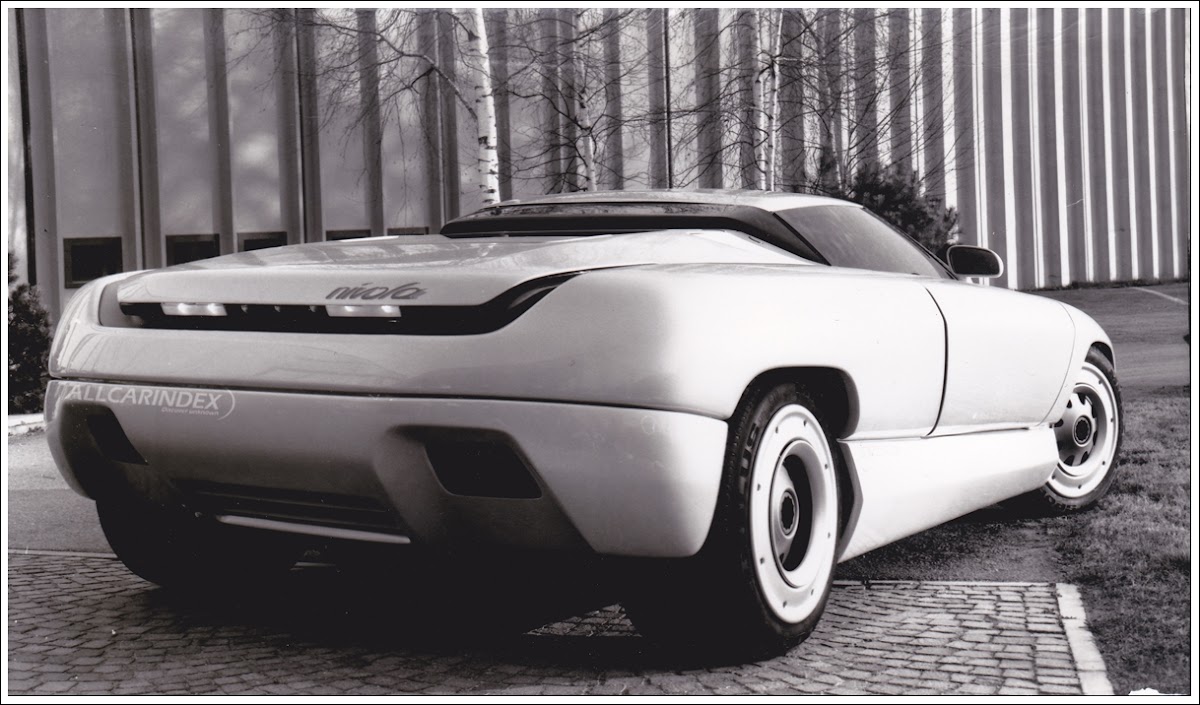 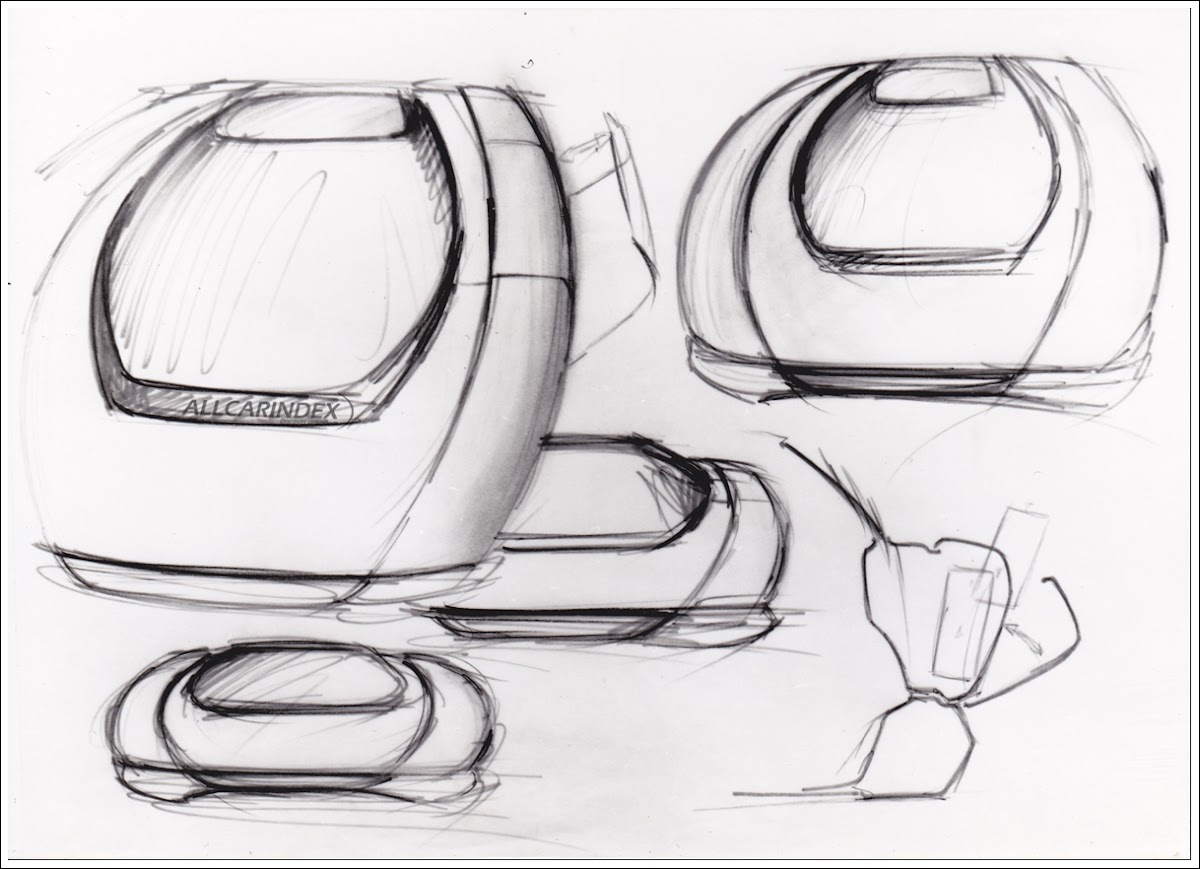 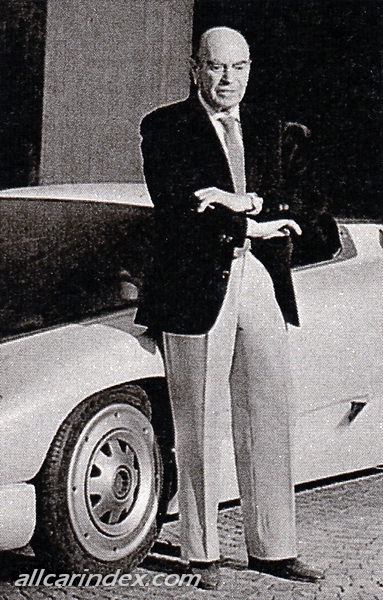 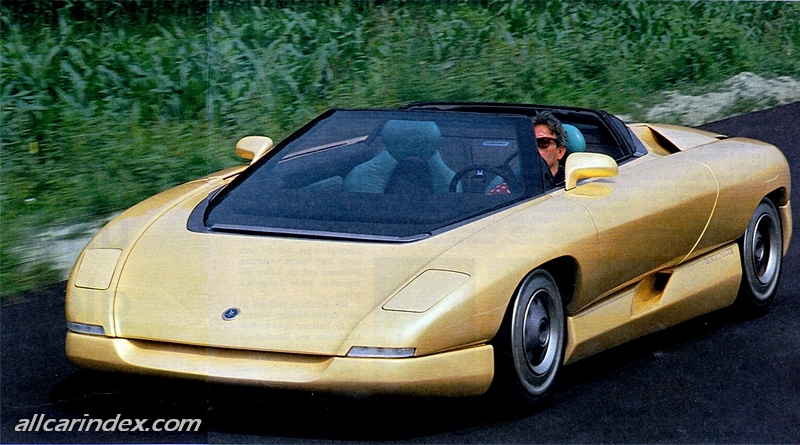 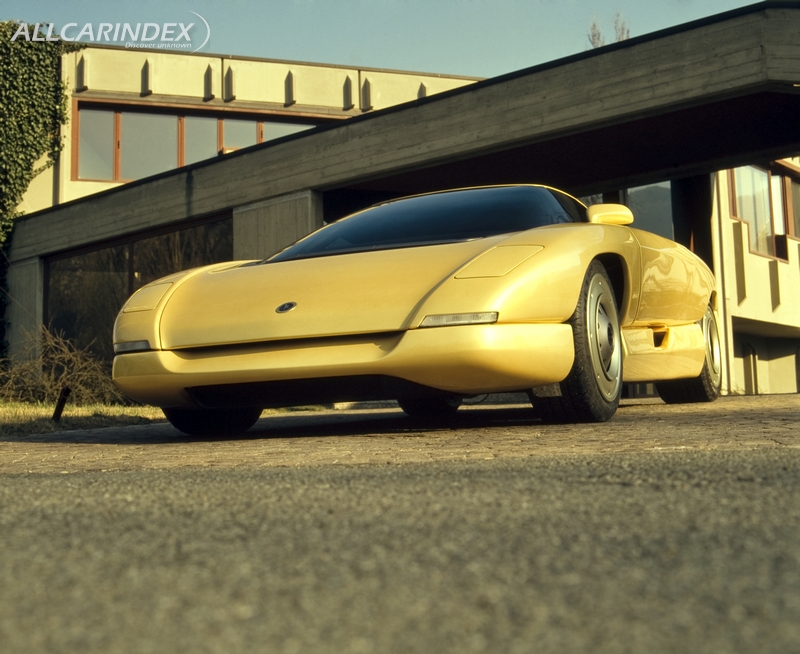 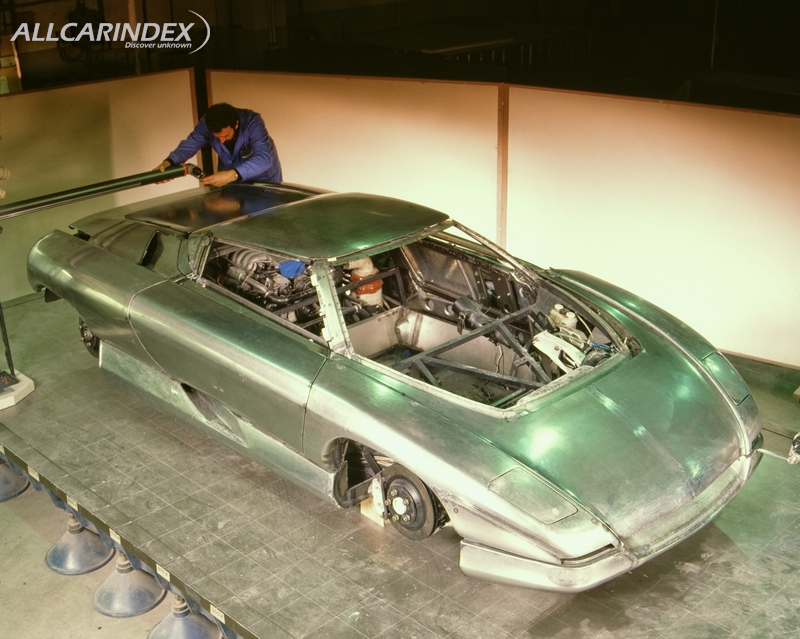 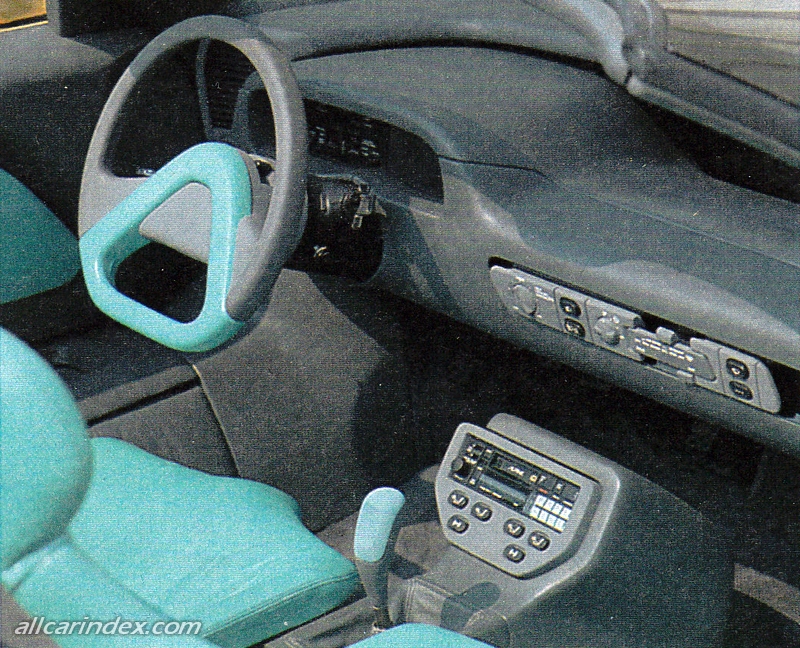 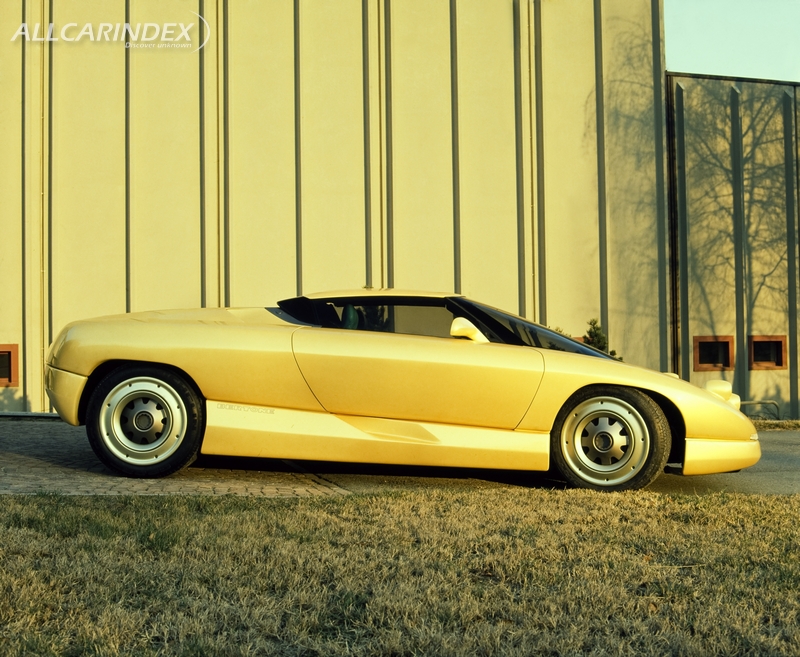 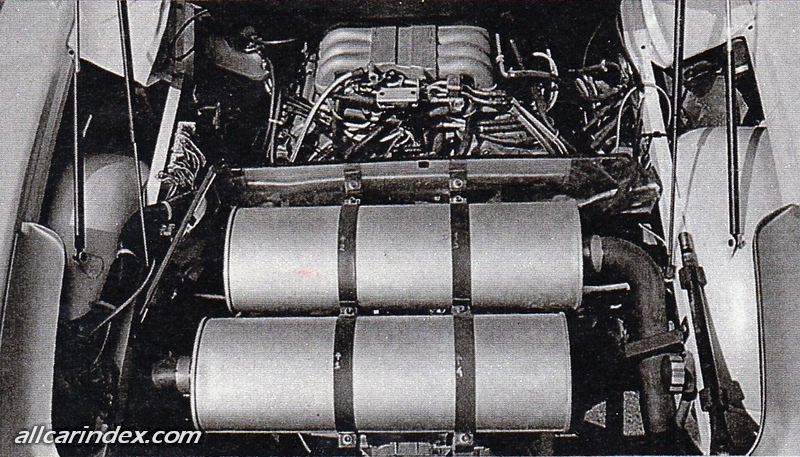 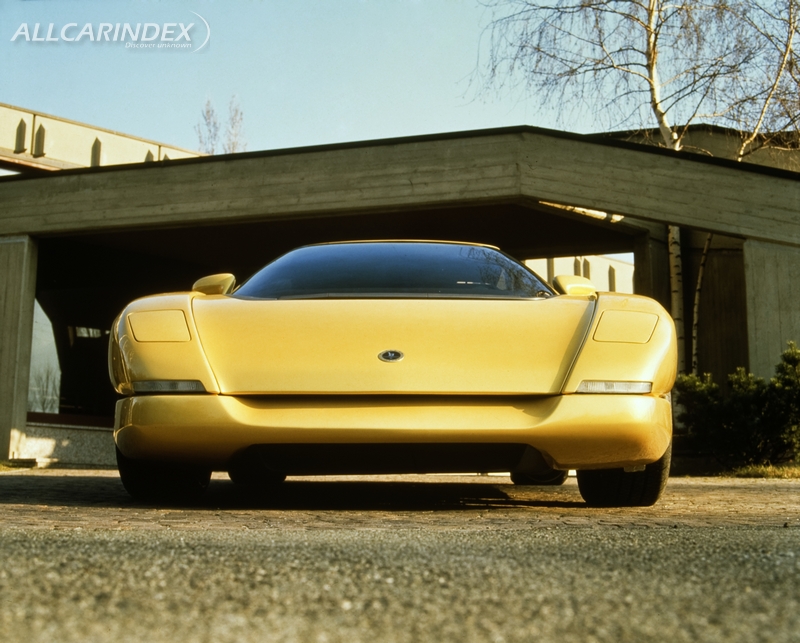 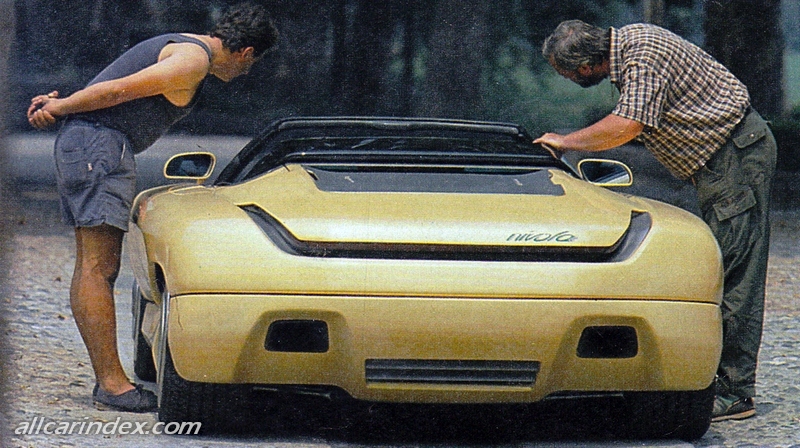 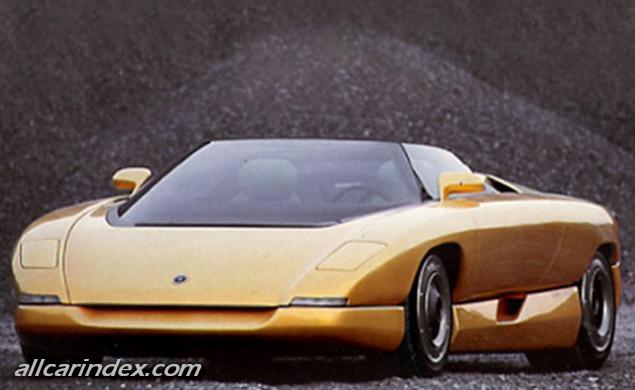 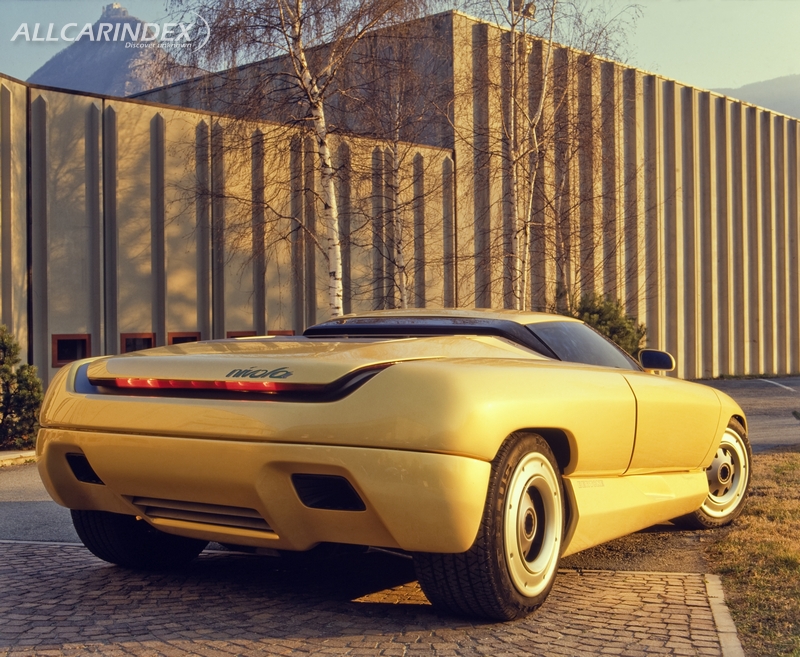 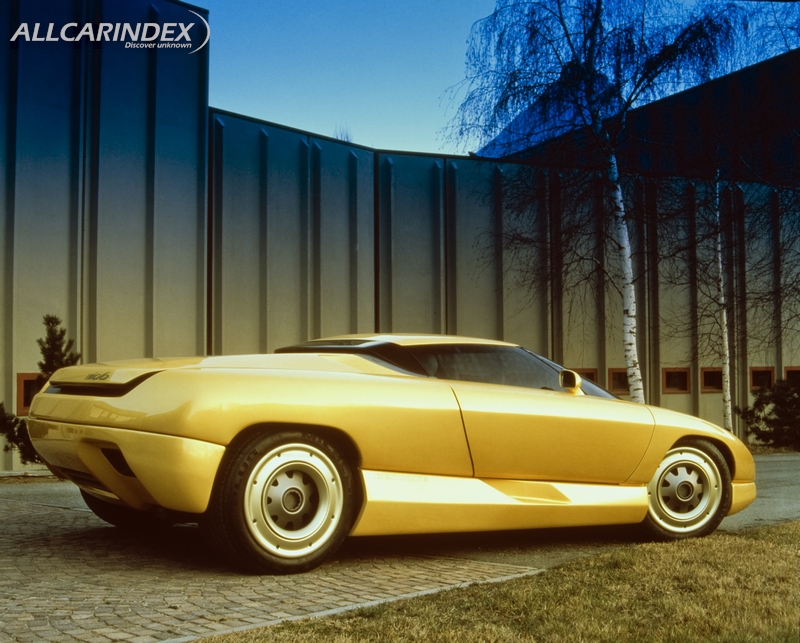 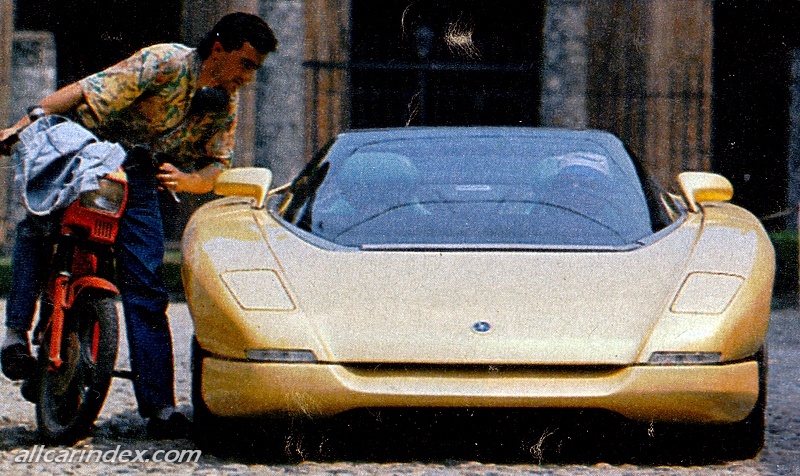 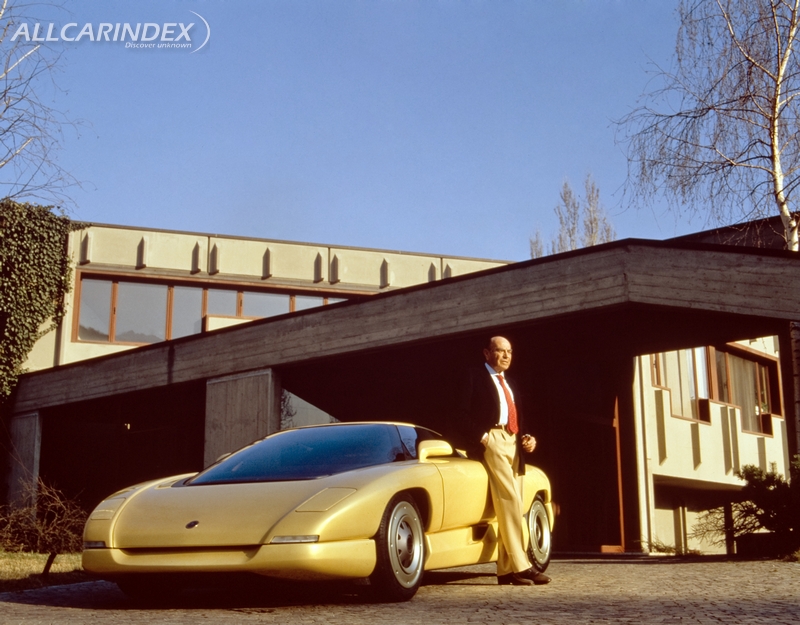 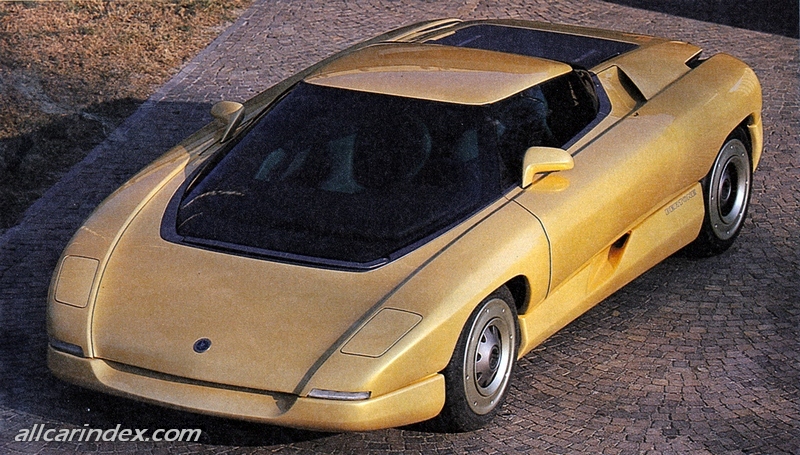 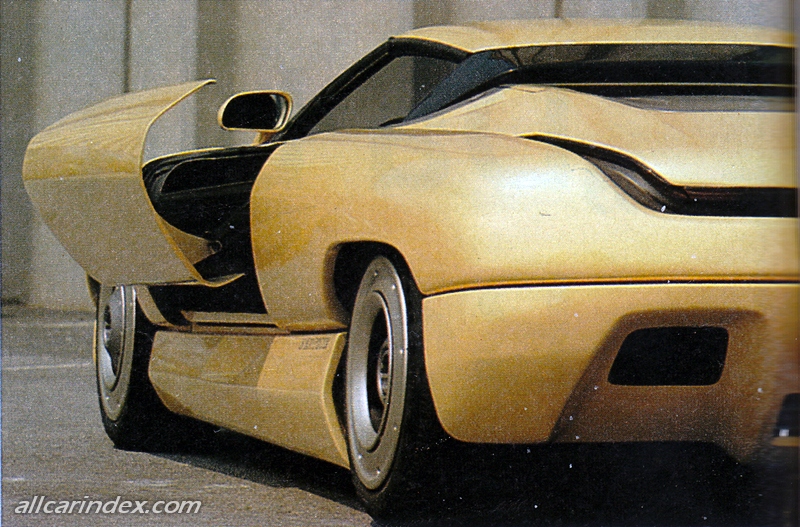 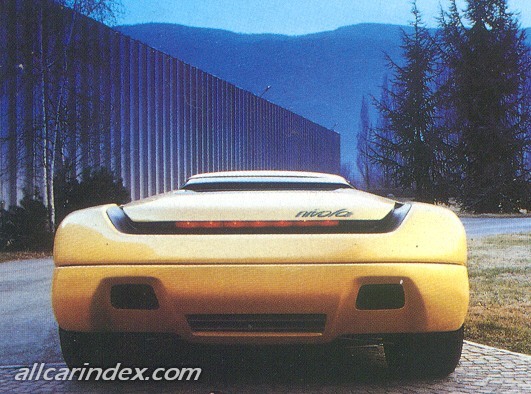 Even more demanding than the Lamborghini Genesis project (1988) was the Nivola prototype. Put on show at the 1990 Geneva Motor Show, the prototype was built around Chevrolet Corvette mechanics, this time those of the ZR-1 version. The impressive 381 Hp engine was moved back behind the cockpit and teamed with a new ZF gearbox, thus achieving a balanced distribution of weight (40% on the front axle and 60% on the rear axle). This highly sporty model has a central engine with an original structure designed around it. The body of the Nivola came into being at the same time as the chassis, and the two components are closely integrated. The result is a two-seater coupé which can be transformed into a spider with the removal of the slender roof. There are some really original touches, like the seats without cushioning (driver and passenger sit directly on the base of the vehicle), and the doors which conceal two ample baggage compartments. The hydraulic-pneumatic suspensions allow for a vertical range of movement of 6 cm respect to the ground. All in all another ambitious project from the artistic and technological powerhouse of the Bertone Style Centre.

NIVOLA is a name that makes- a fine phonetic match with tie mark and. is readable in every language It was the nickname of TAZIO NUVOLARI, the famous racing driver of the Thirties and Forties. It was his custom to wear a yellow pullover when racing and Bertone has therefore chosen yellow as the color for its NIVOLA.

BERTONE "Nivola". This two-seater coupe with its centrally mounted Chevrolet Corvette engine is a sports car par excellence. The Athon, Zabrus and Genesis, and now the Nivola, form a series of steps along Bertone's path towards advanced design and allcarindex functional efficiency.

Exploration and expressiveness over a flexible time scale.

the Genesis, Bertone set out to imagine the future beyond the year 2000 with its suggestions and its challenges.

The Nivola, on the other hand, stands on a closer horizon. Fascinated yet again by the advanced technology and elegant engineering embodied in the Corvette ZR1 power plant, Bertone has set out to develop this theme in the way that he probably finds most congenial and where his talents and expertise are universally recognised: the centrally mounted engine.

Bertone, in fact, launched this allcarindex arrangement in the Sixties with the fabulous Lamborghini Miura, and then boldly transferred it to a longer run sports car, the Xl/9 (180,000 units produced).

Bertone's thoroughbred stable, indeed, includes a full 17 models with a central engine. Each occasion has been an act of self-defiance to solve tricky engineering and construction problems. The use of mechanical assemblies conceived for front installation means that the whole system must be redesigned. A new chassis must be thought out, designed, and built. All the other components (suspensions, gearbox, transmission, steering, controls, etc.) typical of a "central engine” vehicle have to be “invented".

Since the Nivola is still at the prototype stage, of course, many engineering problems have been addressed without experimentation and the corroboration offered by a production model. Even so, the enterprise demands extensive technical skill constantly accompanied by a good dose of stimulating inventive phantasy. One reason being that, like all Bertone prototypes, the Nivola is not just made to be admired, but also to run perfectly on the road. A classic example in this respect is the STRATOS ZERO.

A futuristic model of the Seventies that was only 84 cm high, yet turned the very notion of an automobile upside-down and set it in everyone's view in the sphere of fantastic "dream cars".

None the less, this strange "object" was faultless on the road and in the following year gave rise to a real phenomenon: the LANCIA STRATOS, which provided indisputable proof of its superiority for almost ten years in international rallies. Aside from the technical problems, of which more later, Bertone has set out allcarindex to express a highly emotional design with the Nivola. A suggestion that takes shape from the very first glance. Subsequent observation of its details, the power of the engine, its searing acceleration on the road, etc. are but the further strengthening of the visual emotion experienced in those first fleeting seconds.

Strip off the clothing and you'll find a super sports car!

And it's true to say that the clothing hides a massive investment of resources, imagination, engineering and innovation. Virtually the whole general layout of the vehicle has had allcarindex to be redesigned, structures and suspensions included. The- governing principle stems from the arrangement of the power plant. Thanks to the use of a new 5—speed ZF gearbox, this has been shifted to a rear lengthwise position, resulting in an even weight distribution (40% on the front axle, 60% on the rear axle), and a decidedly sporting trim in keeping with the aesthetic philosophy of the project.

The extraordinary power and torque of the new Corvette engine, for example, enable the standard ZR1 to do the standing 60 mph (0-100 kph) in 4.3 sec, compared with the Ferrari F40's 4.56 sec.

The NIVOLA's centrally located engine provides a better ground grip in acceleration than the standard model, and an equally exciting performance.

The chassis is in square-section high-strength 25 CD 4 tube steel. The design of the structure has successfully married high torsional rigidity and a very light weight. Reformulation of the layout of the mechanical assemblies has also influenced the design of the suspensions. The pressed    aluminium

triangles, links and sway restrictors have been retained with a newly designed,    superposed quadrilateral operating mechanism.

These have an elastic springing component consisting of a volume of air integrated in the shock absorber.

A watertight hydraulic control unit with an electronic command module ensures that the vehicle is in the correct allcarindex driving trim whatever the load, and varies its ground clearance if necessary. The original braking system and wheel sides have been retained, whereas the transmission is via steel half-axles with constant-velocity joints. All the on-board plants have been created from scratch. The radiator has been mounted with a slope in the front.

The services of leading Formula 1 specialists (Nova Progetti -Albatech, etc.) were called upon by BERTONE for the design and materialisation of the mechanical assemblies.

A deliberate search has been made for a formal appearance evoking strong emotions. Aesthetic and functional evaluation went hand in hand, each a function of the other.

The formal concept was the starting point for attainment of an innovative mechanical formulation that would accomplish the predetermined objective. Moreover, this innovative mechanical formulation stimulated and then permitted a full freedom of formal expression. An integrated allcarindex project, therefore, in which the various elements of the system were combined, and resulted in a "multiplier" effect.

The shape of the Nivola develops from front to rear with a very fluid and natural continuity of line. Any interruption that might have disturbed the formal harmony of the whole has been deliberately avoided. The Nivola is thus a coupe that can be converted into a sports car by removing the roof and stowing it in a recess ingeniously snugged in above the engine compartment.

Bertone has designed doors of every kind for its models over the years. A novel arrangement has been chosen for the Nivola in the form of doors acting as luggage carriers. Large compartments have been fashioned for this purpose in the generous thickness of the doors, whose "skin" is released by means of an original allcarindex system to provide access. The idea springs from the side-pouches carried by motorcycles, with the difference that these holders are housed in the bodywork and hence invisible. The passenger compartment is designed with an eye to maximum roominess and comfort.

Very original seats have been designed to give a greater reeling of spaciousness. Two massage vibrators for use when required are installed in the seat cradles. Specialists in orthopaedics have expressed their approval of this system and recommend its adoption to relieve the fatigue and stress of a long journey.

Particular attention has been paid to matching the interior colours.

With their coolness, they contribute and accentuate the impression of space and luminosity of the whole.

As already mentioned, the Nivola is a prototype fully prepared to go out on the road, in keeping with the Bertone tradition.

A blend of high technology and strong personality. Compact, exclusive, and with an emotionality deliberately pushed to the limit. The last of these characteristics is one that is acquiring increasing importance. The success or failure of a model is becoming ever more closely linked to a design that must arouse emotions from the very first moment. Afterwards it will be too late and an empathy has probably been lost for ever. Bertone's memoirs are full of these "loves at first sight", such as the MIURA, the CARABO, the STRATOS and the COUNTACH. Some of these masterpieces are on display at the Georges Pompidou Centre's "Automobile Design" Exhibition in Pans, which will remain open until the end of April. A unique chapter in the allcarindex history of the motor car.

An event that rewards the audacity, professional skill and vein of creativeness of a school of design. The Bertone Nivola is the latest and by no means the least of the series.

suspensions : quadrilateral with transverse and