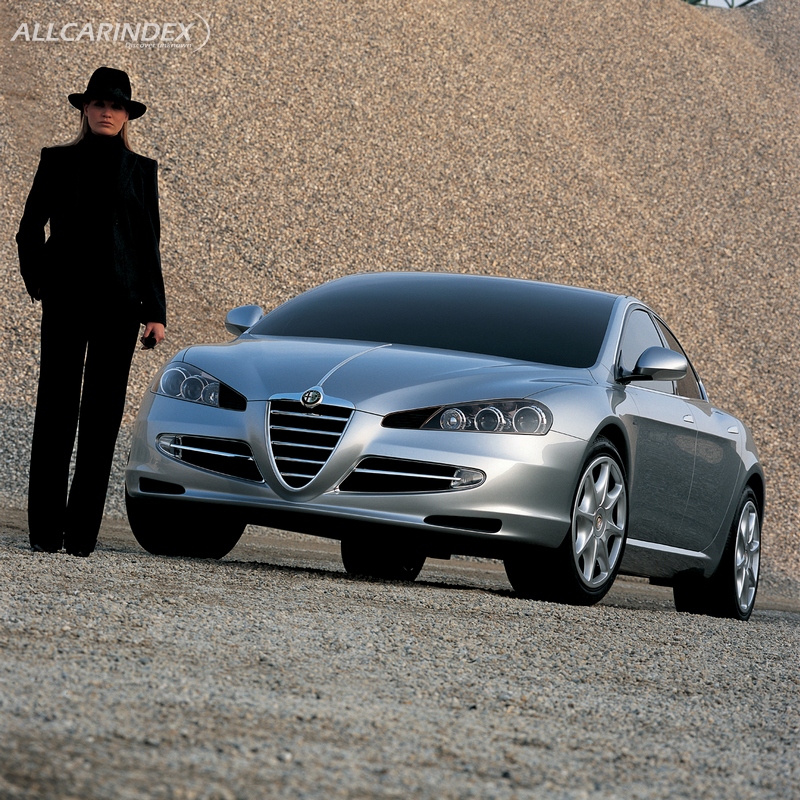 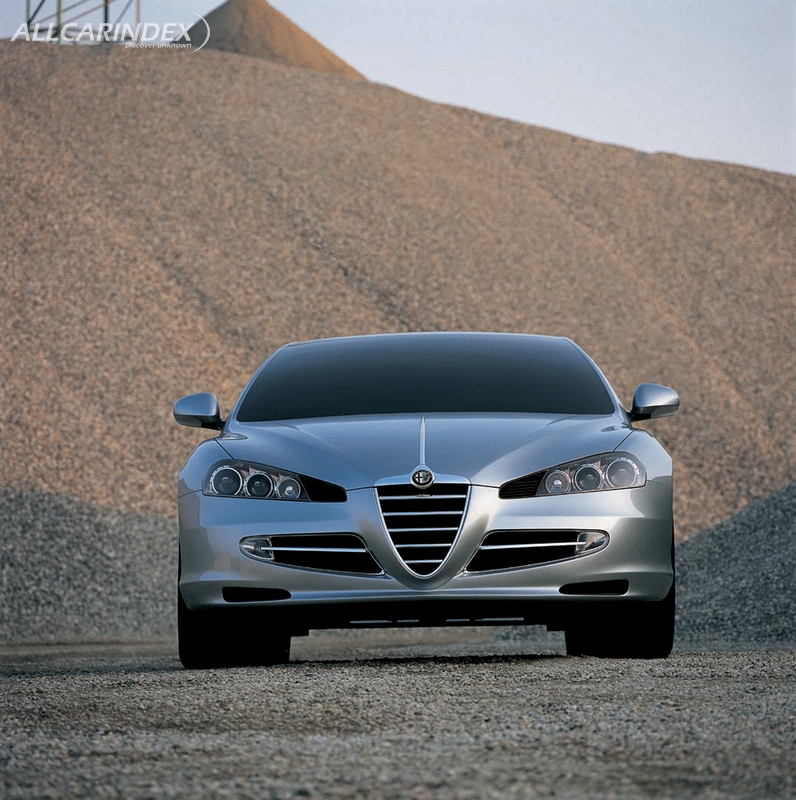 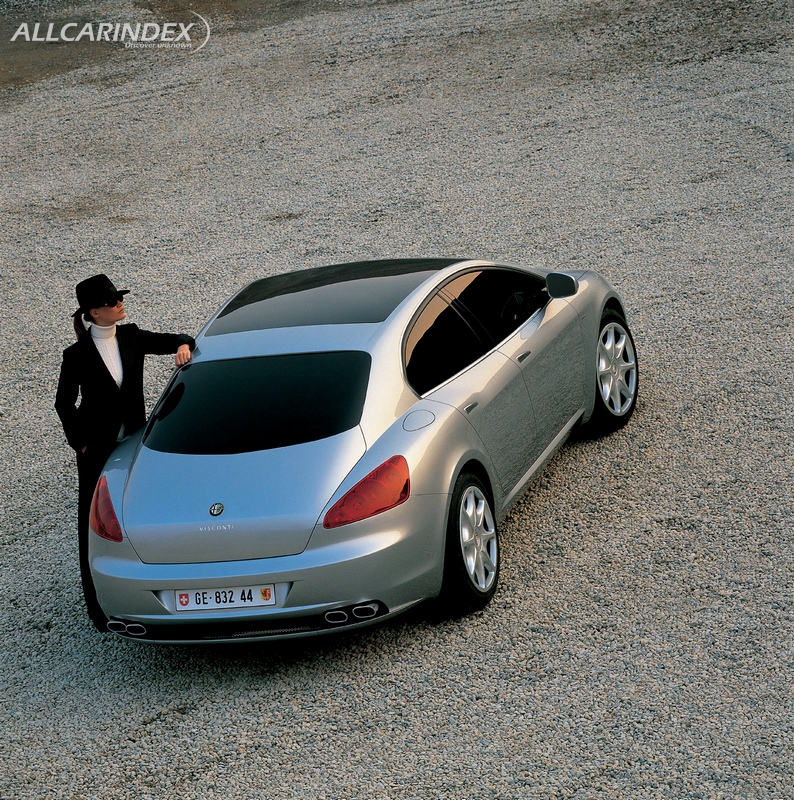 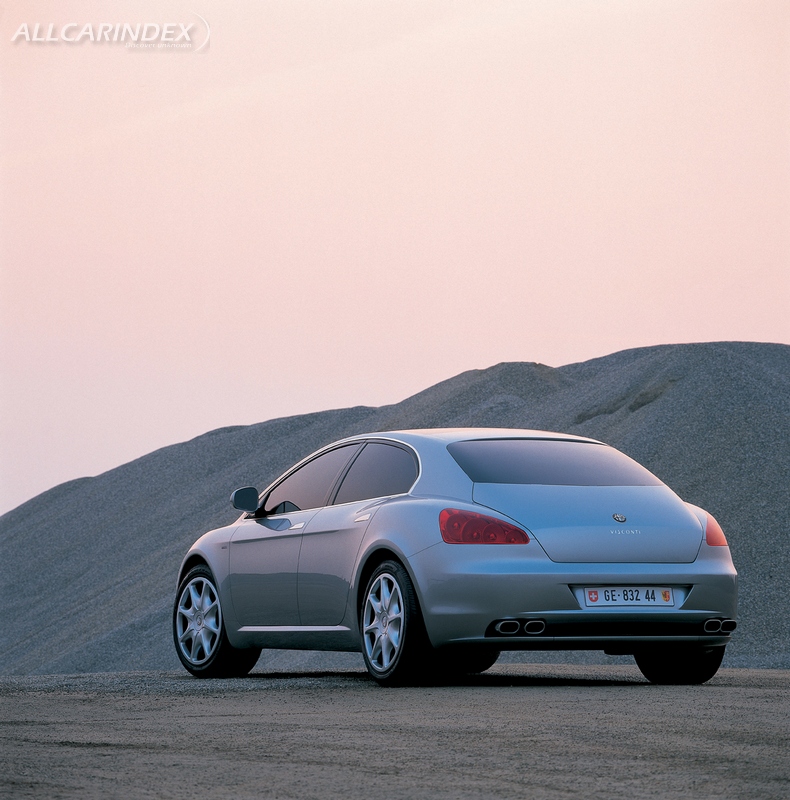 For the 2004 edition of the Geneva International motor show, Giugiaro decided to come up with the shape that he felt was most in keeping with an Alfa range leader. Not a conventional three-box, four-door saloon but a large sporting car that was almost a hatchback, with a drooping tail end.

The starting point for the Visconti was the Premium Platform, developed by Alfa Romeo as a base for the 156 saloon, Sportwagon, coupé and spider, a quartet of cars, all created as a development of the Brera concept car.

The aim for the Visconti was to use an Alfa Romeo V6 3.2 litre biturbo petrol direct injection JTS, capable of 405 hp of power and 680 Nm of torque.

The 6-speed automatic transmission included permanent four-wheel drive with the rear wheels also steering, while vehicle stability was guaranteed by a VDC system, the Alfa Romeo interpretation of  ESP - and also the use of active control of the stabiliser bars.

Visconti represents the proposal created by Giorgetto Giugiaro in the throw of freedom for an Alfa Romeo flagship with innovative architecture.

Rather than working on the 4-door 3-volume saloon classic layout, Giugiaro steered a keen eye towards the sporting appeal opting for an architecture focused around 2-volume vehicles, in that the boot appears like a mere flick of the tail.

As always, albeit stirring provocation from a styling point of view, Giugiaro has not stepped away from his personal tradition of creating concept cars that may also go straight into series production.

In truth of word, the Visconti sees inception from a specific evolution of the Premium Platform, as put in place by Alfa Romeo for the Alfa 156 new generation and for the Brera Coupé production.

Fitted with a V6 bi-turbo 3.2 direct injection petrol engine (408 hp), the Visconti is just under five meters in length and less than 1,9 meters in width.

The styling and, not least, the mechanics of the Visconti step beyond the mundane: in fact, the vehicle has been designed and created with all-wheel drive and §teering.

'An Alfa Romeo flagship that moves beyond the conventional'. That's how Giorgetto Giugiaro photographs the Visconti, the concept car he created in sheer freedom, just like he did two years ago with the Brera coupe.

'The Alfa Romeo is a Marque that made a strong impression on my Designer career. The first series-produced car I designed was the Alfa 2000 Sprint. Italdesign itself was created to give life to the Alfasud project. Over now what must be almost a career span of fifty years, I found myself designing cars on more than one occasion for the 'Biscione' Carmaker, sometimes by way of contract, and sometimes in sheer freedom'.

'For the 2004 Geneva Motor Show, I thus decided to give the shape that I felt more fitting for an Alfa flagship. Not a traditional 4-door three-volume sedan, but an almost two-volume great sports car, with a downward sloping shaped tail-end'.

The ultimate outcome is known as Visconti, a name chosen in honor of a Milan family ancestry, the coat of arms of which represents the Alfa Romeo marque.
An almost coupe almost 5 meters long

At a first glance, the Visconti appears almost a 4-door coupe, albeit the dimensions, which touch upon five meters in terms of length, are those typical of a flagship.

The front is extremely plastic and very balanced in its modeling. In the plan view the front-end, weaving from an important wheel-arch, rounds towards the Alfa Romeo grille thereby becoming a characterizing element embedded in a single curve. The front optic units are designed with flowing movement and elegance. The rear fenders are a key element, placing in evidence the modeled upper section which narrows significantly thereby highlighting these majestic fenders.

However, this architecture never before seen in the panorama of contemporary production is not entirely new to Giugiaro who, back in 1993 with the Bugatti EB 112, had theorized a great two-volume sports sedan. (concept carz)

As explained by Giugiaro: 'The EB 112 was a true source of inspiration for the tail-end shape. However, as time passed, the design became so intermeshed with Alfa Romeo suggestiveness that any train of thought to the Bugatti disappeared, thus becoming a coherent evolution of the lines and spirit of the Brera'.

'The proportions of the Visconti are indeed substantially diverse, as is the mechanical arrangement, a V6 rather than a V12 engine. Placed clearly in evidence is a more advanced interior compartment than on the Bugatti, with the windshield base becoming almost level with the center of the wheel. The downward sloping tail-end becomes one to itself, all-embracing and underscored by the powerful strength of the mighty rear fenders'.

The launching pad for the Visconti was the Premium Platform, developed by Alfa Romeo as the basis for the next-generation 156 Sedan, Sportwagon, Coupe and Spider, a quartet of cars all drawing life from the pencil of Giugiaro as evolution of the Brera concept car.

Given the flagship characteristics with which the Visconti takes the scene, Giugiaro lengthened the wheelbase of the Premium Platform by 20 millimeters, stretching it out to 2,825 mm, with two almost identical overhangs, 1,064 mm to the front and 1,066 mm to the rear, thereby attaining a total length of 4,955 mm.
The width has been harnessed to just under one meter and 90, whilst the height stretches to 1,474 mm, the right compromise between flowing line and flagship ease of accommodation.

Innovative, yet feasible.
As always, albeit waging a provocation from a styling point of view, Giugiaro has not wandered from his personal tradition underpinned by creating concept cars that can be also manufactured in series.

Also at the level of concept cars, research into proper functionality even imposed compromises which the Designer regrets.
'I would have preferred to accentuate more the V at the rear window base, but this aesthetic preciosity would have reduced slightly in size the boot flap, thus making it more difficult to load bulky luggage or packages.'

A new approach to the Alfa grille

The front of a modern Alfa cannot but commence from the ninth power evolution of the Marque's grille.
In the Visconti, it grows bolder in size and dominates, even more than in the past, the front end, whether due to the size of the vehicle or its flagship role.

In this interpretation, the powerful outline of the Alfa brand identity is crossed, as on the more recent Alfa series, by small chromed strips, which here, however, are more thick and farther away from one to the other.
The circular brand log is surmounted by a chromed eyelid that stretches across the engine bonnet pushing through a slender trimming – chromed as well – that runs up to the windshield base.

There are six air intakes on the front-end, two at the fender base, two in proximity to the lower part of the grille (which also house the fog lights), plus two on headlight inside rims.
However, more than just a question of aesthetics, these seemingly in excess air intakes are the result of the expertise gained during the industrial development of the Brera, which, in its preliminary definition, did not ensure enough airflow for a turbo-engine car.

Únlike the traditional 4-door three-volume sedans featuring a tapering engine bonnet, the Visconti has a short and compact front grille, which, rather than transuding grandeur, attempts to transmit a sense of power lying in wait to leap.
Also pushing through this front volume layout was compliance with pedestrianimpact new standards, scheduled for enactment part way 2005, which call for more vertical fronts and more raised engine bonnets.

Fresh and simple body side, with an elaborated tail-end full of surprise

The body side is incredibly fresh. The traditional outline that connects ideally the two wheelhouses is merely a sheet metal pleat, barely noticeable.

The roof seeks to maintain the most harmonious route possible, making almost imperceptible the 'elbow' needed to allow the back window to be rolled down.

Without doubt, the low-lying and spinning tail-end is the more unusual aspect of the Visconti.
Indeed, from a three-quarter front view, the car looks just like a two-volume. Moving to view from the side, starting however to emerge – between the powerful relief of the high wide shoulder of the rear wheel-arches – is a real and proper boot, albeit presenting a downward curved line.
Accordingly, it is from the rear three-quarter view that the boot shows itself not just to be a hint of shadow, but a generous volume of space, allowing 458 liters of carrying capacity.

From a historic matrix standpoint, the shaping of the low, muscular and cut-off tail-end reflecting a dash of the 'Fifties' is not so much an absolute novelty as the recapture and modernization of the solutions that made certain Alfa models, like the Pescara 6C, so famous.

Dominating the full view from rear are the mighty all-embracing optic units, which, with a circular motive designed inside, weave their way from the body side.

Along with the styling, beyond dream mechanics

From a mechanics stand point, the Visconti theorizes the use of a V6 3.2 liter JTS direct injection biturbo petrol engine, with 405 horsepower capability and 680 Nm pairing.

The 6-gear automatic gearbox provides for permanent all-wheel drive with rear wheel §teering as well, whilst vehicle stability is ensured – other than by the VDC, an Alfa Romeo interpretation of the ESP – by use of stabilizer rod active control.

Comfort is assured by the suspension pneumatic springs, which also enable the electronic control of the height from the ground, whilst Brembo CCM ceramic composite plates pave the way towards exceptional braking performance.

Why the Visconti name.

For an upper lineage Alfa Romeo, Giugiaro wanted to reflect in the name a symbol of the Milan marque: the 'biscione' that characterizes the marque. In fact, the Visconti ducal coat of arms is represented by a shield bearing a serpent with a babe in its mouth, surmounted by a crown. The Visconti family recollects that – back in year 800 – one of their ancestors had killed in the vicinity of Milan a serpent that poisoned infants just by breathing on them. The other half of the Alfa Romeo logo, the red cross set against a white background, stems on the other hand from the banner of the city of Milan.