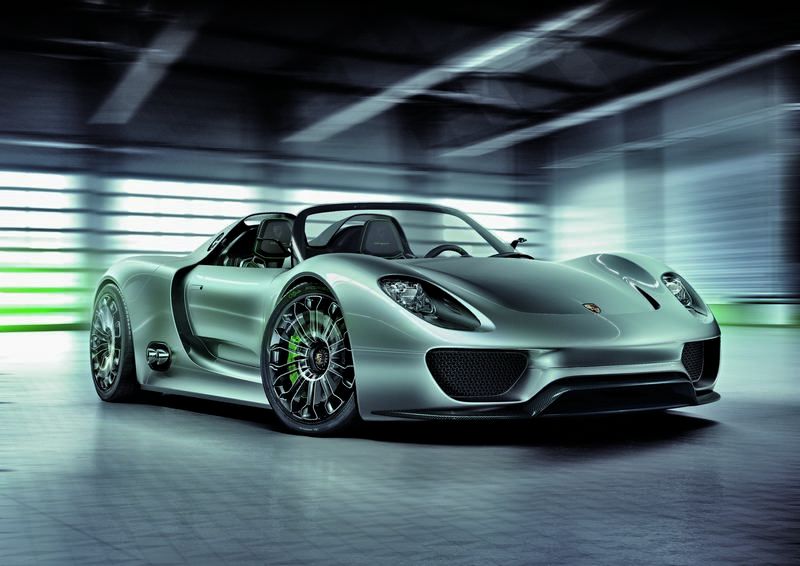 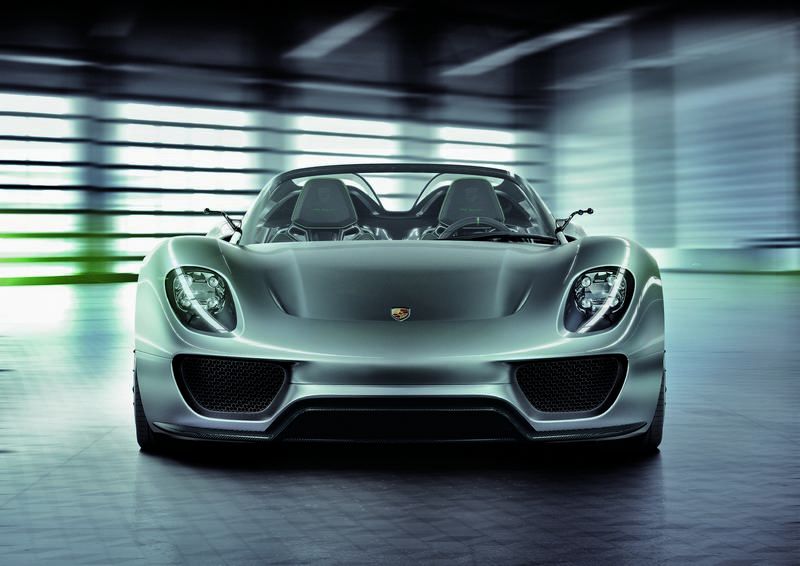 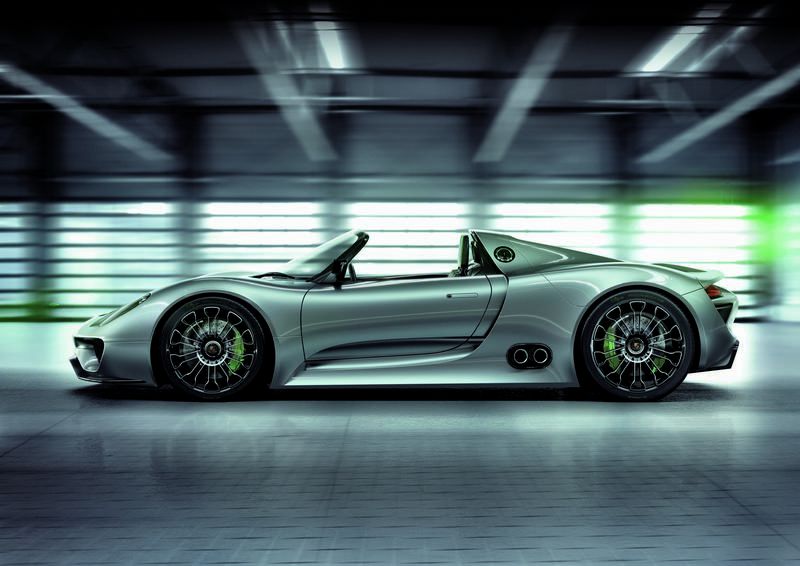 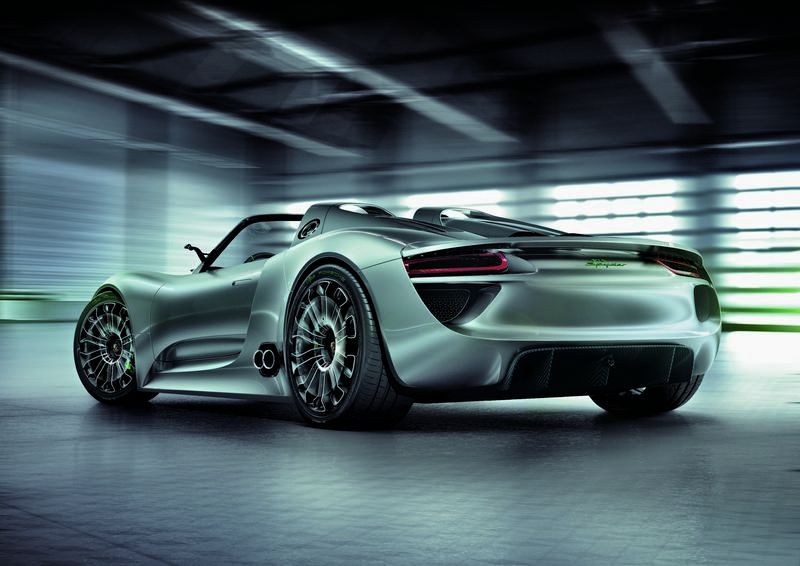 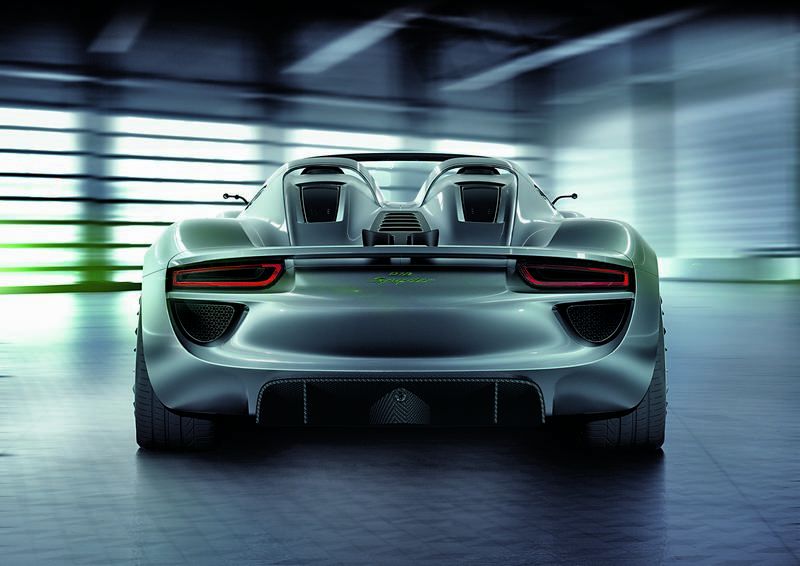 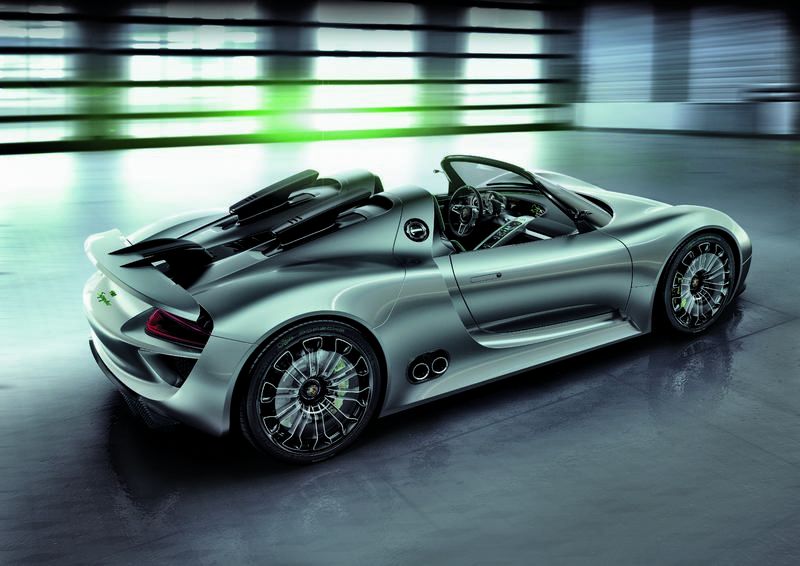 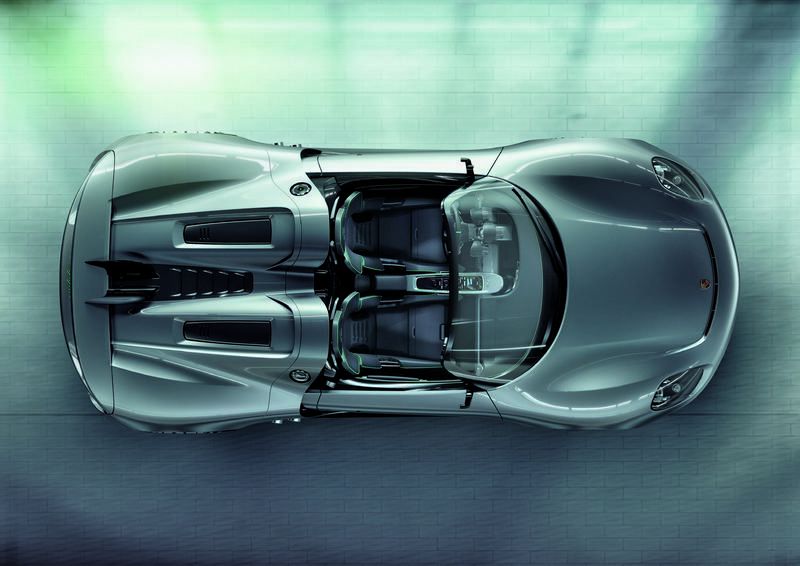 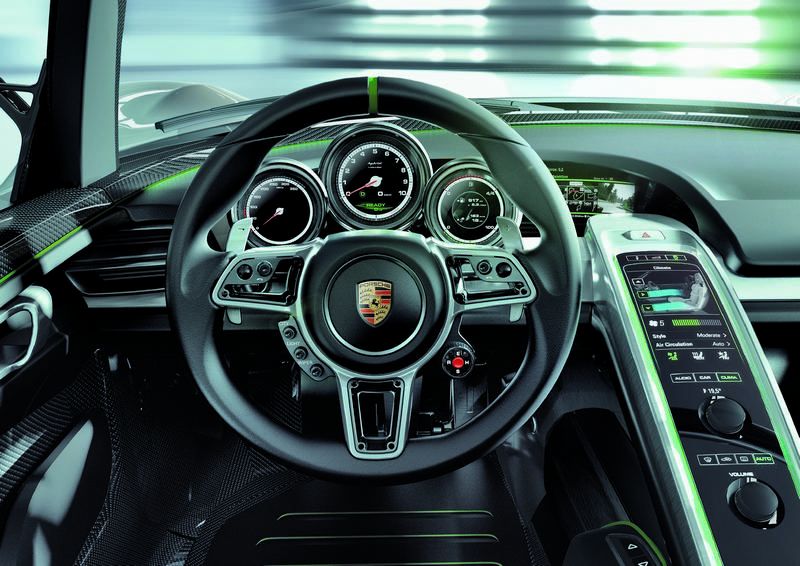 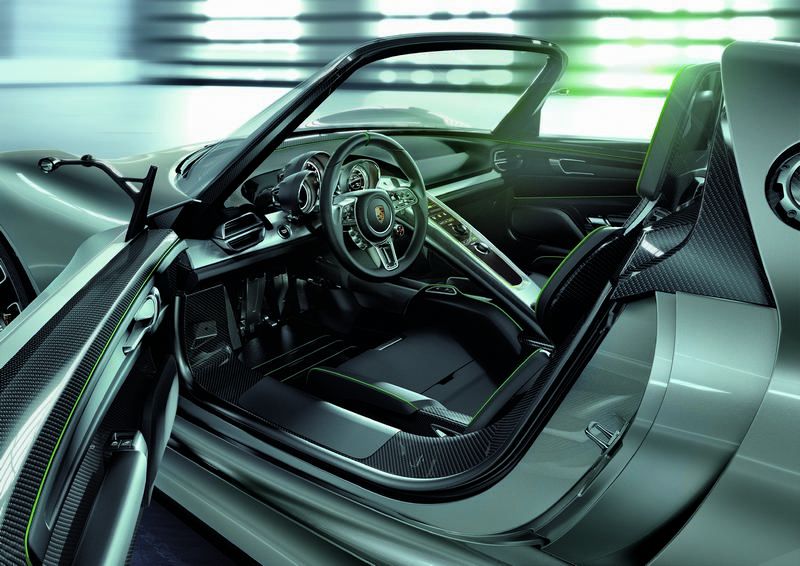 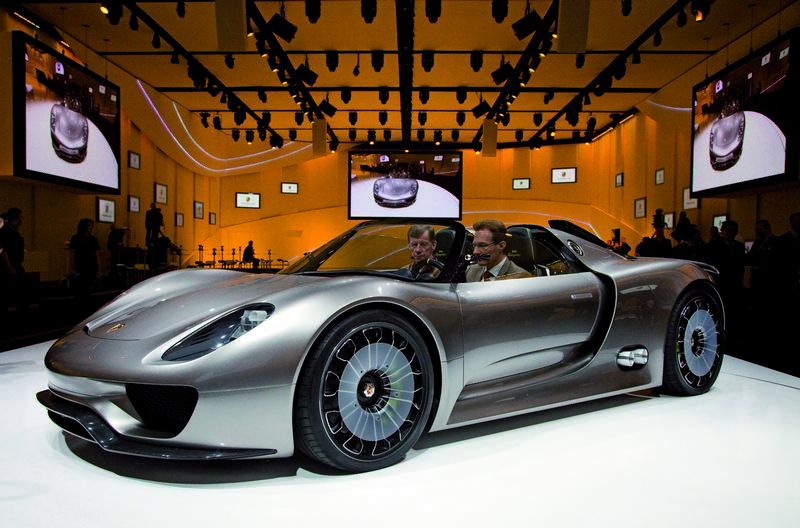 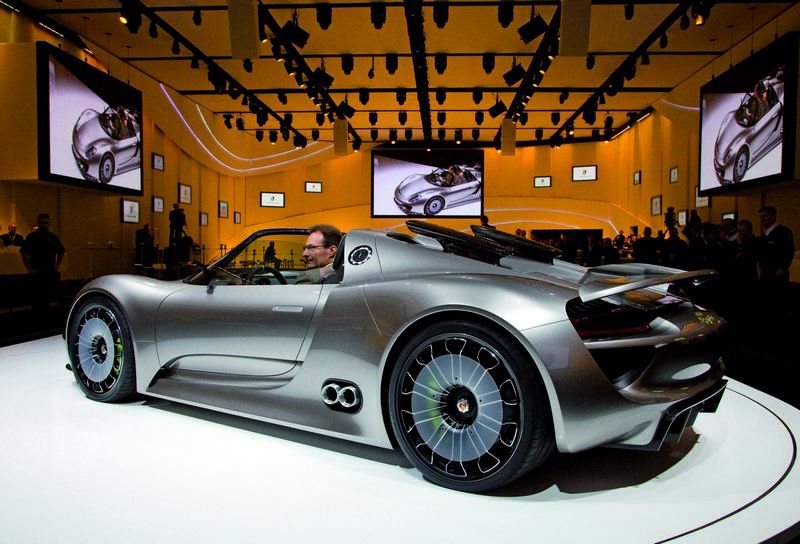 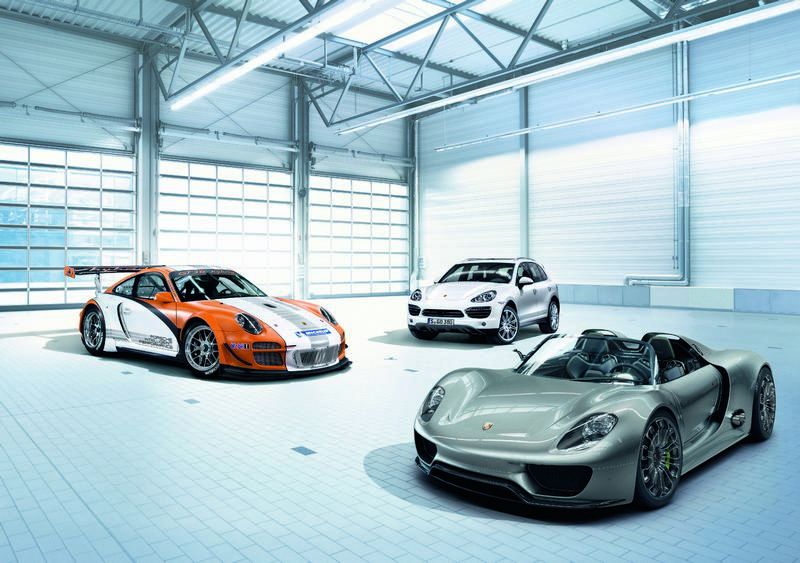 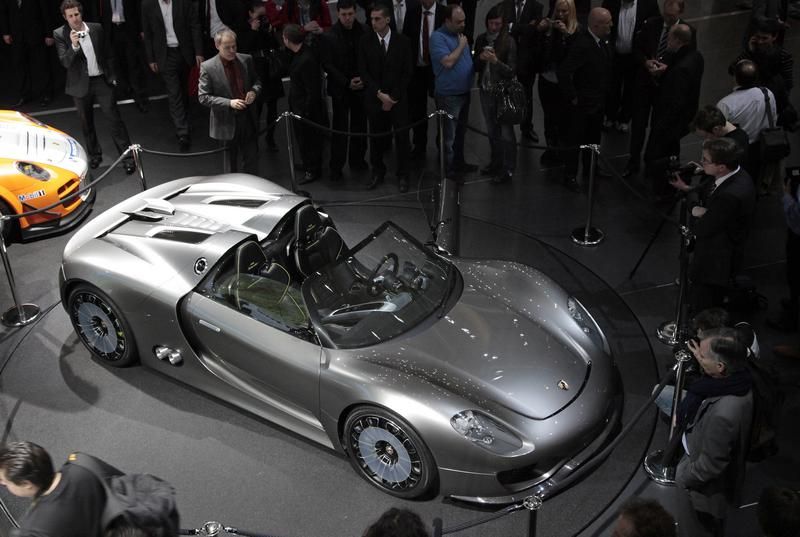 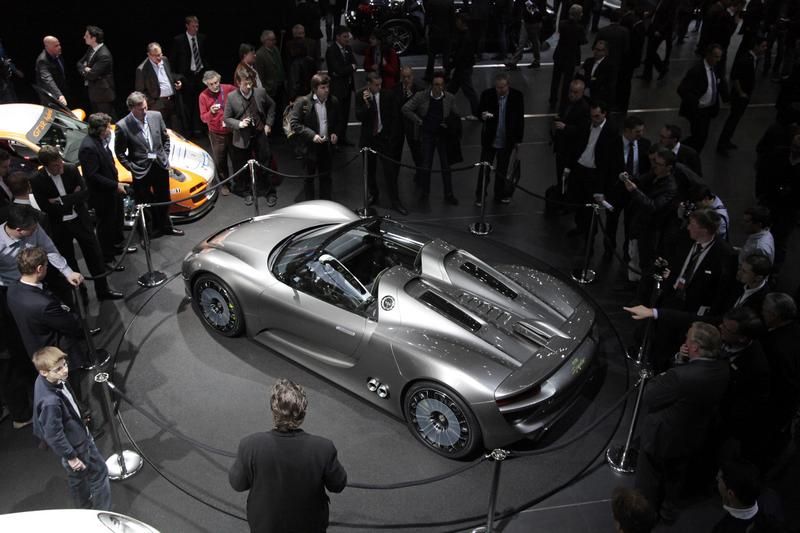 Genf. Michael Macht, the President and Chief Executive Officer of Dr. Ing. h.c. F. Porsche AG, Stuttgart, presented the Porsche 918 Spyder concept car at its world debut this evening in Geneva. This mid-engined two-seater combines the performance of a super-sports car with the CO2 emissions of a small compact, an innovative plug-in hybrid concept reducing emissions to just 70 grams CO2 per kilometre and fuel consumption to 3.0 litres/100 kilometres (94 mpg imp). Within this concept Porsche combines a V8 power unit delivering more than 500 hp and three electric motors with overall output of 160 kW.

The 918 Spyder prototype combines high-tech racing features and electro-mobility to offer a fascinating range of qualities: An emission level of just 70 grams CO2 per kilometre on fuel consumption of three litres/100 kilometres (equal to 94 mpg imp) truly outstanding even for an ultra-compact city car, on the one hand, combined with the performance of a super sports car and acceleration from a standstill to 100 km/h in just under 3.2 seconds, top speed of 320 km/h (198 mph) plus, and a lap time on the Nordschleife of Nürburgring in less than 7:30 minutes, faster than even the Porsche Carrera GT, on the other.

The 918 Spyder is one of three Porsche models with hybrid drive making their world debut at the 2010 Geneva Motor Show. This trio – made up of Porsche’s new Cayenne S Hybrid SUV with parallel full-hybrid drive, the 911 GT3 R Hybrid racing car with electric drive on the front axle and a flywheel mass battery, and the two-seater high-performance 918 Spyder mid-engined sports car with plug-in hybrid – clearly demonstrates not only the great bandwidth of this new drive technology, but also the innovative power of Porsche as a genuine pioneer in hybrid drive.

The Porsche 918 Spyder with plug-in hybrid provides the performance of a thoroughbred super sports car on fuel consumption of just three litres/100 kilometres in the New European Driving Cycle, equal to a CO2 emission rating of 70 g/km.

This open two-seater is powered by a high-speed V8 developing more than 500 bhp and running at maximum speed engine of 9,200 rpm as well as electric motors on the front and rear axle with overall mechanical output of 218 bhp (160 kW).

The V8 combustion engine is a further development of the highly successful 3.4-litre power unit already featured in the RS Spyder racing car and positioned midship in front of the rear axle, giving the car the right set-up for supreme performance on the race track through its good balance.

Power is transmitted to the wheels by a seven-speed Porsche-Doppelkupplungs-getriebe also feeding the power of the electric drive system to the rear axle. The front-wheel electric drive powers the wheels through a firm transmission ratio.

The energy reservoir is a fluid-cooled lithium-ion battery positioned behind the passenger cell. The big advantage of a plug-in hybrid is that the battery can be charged on the regular electrical network. A further point is that the car’s kinetic energy is converted into electrical energy fed into the battery when applying the brakes, thus providing additional energy for fast and dynamic acceleration.

A button on the steering wheel allows the driver to choose among four different running modes: The E-Drive mode is for running the car under electric power alone, with a range of up to 25 km or 16 miles. In the Hybrid mode the 918 Spyder uses both the electric motors and the combustion engine as a function of driving conditions and requirements, offering a range from particularly fuel-efficient all the way to extra-powerful.

The Sport Hybrid mode uses both drive systems, but with the focus on performance. Most of the drive power goes to the rear wheels, with Torque Vectoring serving to additionally improve the car’s driving dynamics.

In the Race Hybrid mode the drive systems are focused on pure performance with the highest standard of driving dynamics on the track, running at the limit to their power and dynamic output. With the battery sufficiently charged, a push-to-pass button feeds in additional electrical power (E-Boost), for example when overtaking or for even better performance.

With the hybrid drive system offering this wide range of individual modes and applications, the 918 Spyder is able either to achieve lap times comparable to those of a thoroughbred racing car – such as less than 7:30 minutes on the Nordschleife of Nürburgring – or, focusing on a more economical style of motoring, with a reduction in emissions to just 70 grams of CO2 per kilometre.

Like the drivetrain, the lightweight body structure of the 918 Spyder also bears out the car’s DNA carried over directly from motorsport: The modular structure with its monocoque bodyshell made of carbon-fibre-reinforced plastic (CFP) and the appropriate use of magnesium and aluminium not only reduce weight to less than 1,490 kg or 3,285 lb, but also ensure supreme driving precision thanks to the very high level of torsional stiffness.

Reminiscent of highly successful, legendary racing cars such as the Porsche 917 Le Mans and the current Porsche RS Spyder, the 918 Spyder with its design concept so typical of Porsche arouses powerful emotions. The combination of racing car dimensions, clearly structured design with perfectly balanced surfaces, and innovative details all round creates an overall pattern of aesthetic, perfectly balanced harmony in design full of power and dynamics. This indeed is the ideal synthesis of form and function following Porsche’s design DNA.

The smooth balance of tradition and progress gives the car a powerful stance on the road in its combination of dimensions. Variable aerodynamics typical of Porsche ensure both visionary and traditional highlights especially around the rear spoiler. The striking rear hoods extending out of the headrests, in turn, not only fulfil an aerodynamic function on the 918 Spyder, but also accommodate retractable air intakes with a ram air function.

The driver and passenger are not only perfectly embedded in contoured sports bucket seats, but also form part of the cockpit with its synthesis of efficient function and ergonomic high-tech operation offering an outlook at the interior architecture we may possibly see in super sports cars of the future. The three free-standing circular dials for road speed (left), engine speed (middle) and energy management (right) would appear to come directly from a racing car in the ‘60s, bearing out that unique philosophy of driver orientation so characteristic of Porsche.

The centre console rising up towards the front in the 918 Spyder houses a touch-sensitive surface for intuitive control of the car’s functions, serving consistently to reduce the number of visible controls and maintain the principle of direct operation.

The control units relevant to the driver are concentrated in particular on the three-spoke multifunction sports steering wheel, while the variable driving modes, again so typical of Porsche, are supplemented by a map switch enabling the driver to call up various drive programs and serving as the push-to-pass button for E-boosting, for example when overtaking. Instrument illumination, finally, varies from green for the consumption-oriented running modes to red for the performance-oriented driving programs.

The 918 Spyder also comes with further innovative functions such as the Range Manager. After being activated in the Center Display, the Range Manager uses the map in the navigation system to present the remaining range the car is able to cover, naturally allowing the driver to influence that range through the appropriate choice of power and performance. In cities with environmental alert areas the Range Manager also states whether the driver is able to reach a certain destination on electric power alone.

Applying this information and using further info on the availability and location of special energy filling stations, the driver is then able to choose his personal style of driving as well as the right battery charge and filling strategy.

Green Light for Series Development of the 918 Spyder

Stuttgart. In its session today, the Supervisory Board of Dr. Ing. h.c. F. Porsche AG, Stuttgart, gave the green light for series development of the Porsche 918 Spyder. Reflecting the overwhelming response from the public and customers to the Concept Study, the Supervisory Board gave Porsche’s Board of Management the mission to develop a production model based on the car already presented. This concept version of an ultra-high-performance mid-engined sports car with plug-in hybrid technology made its debut at the 2010 Geneva Motor Show and at Auto China in Bejing, hitting the headlines worldwide.

Michael Macht, President and Chairman of the Board of Management of Porsche AG: “Production of the 918 Spyder in a limited series proves that we are taking the right approach with Porsche Intelligent Performance featuring the combination of supreme performance and efficient drivetrain concepts. We will develop the 918 Spyder in Weissach and assemble it in Zuffenhausen. This is also a very important commitment to Germany as a manufacturing base.”

The Concept Study of the 918 Spyder allows CO2 emissions of just 70 g/km, corresponding to fuel consumption of 3.0 litre/100 km (94.1 mpg imp) in the NEDC, on the one hand, and the performance of a super-sports car, on the other. This extremely efficient drivetrain technology then forms a symbiosis in the 918 Spyder with truly outstanding design and high-tech motorsport achievements. Further product details of the 918 Spyder will be disclosed in the months to come.