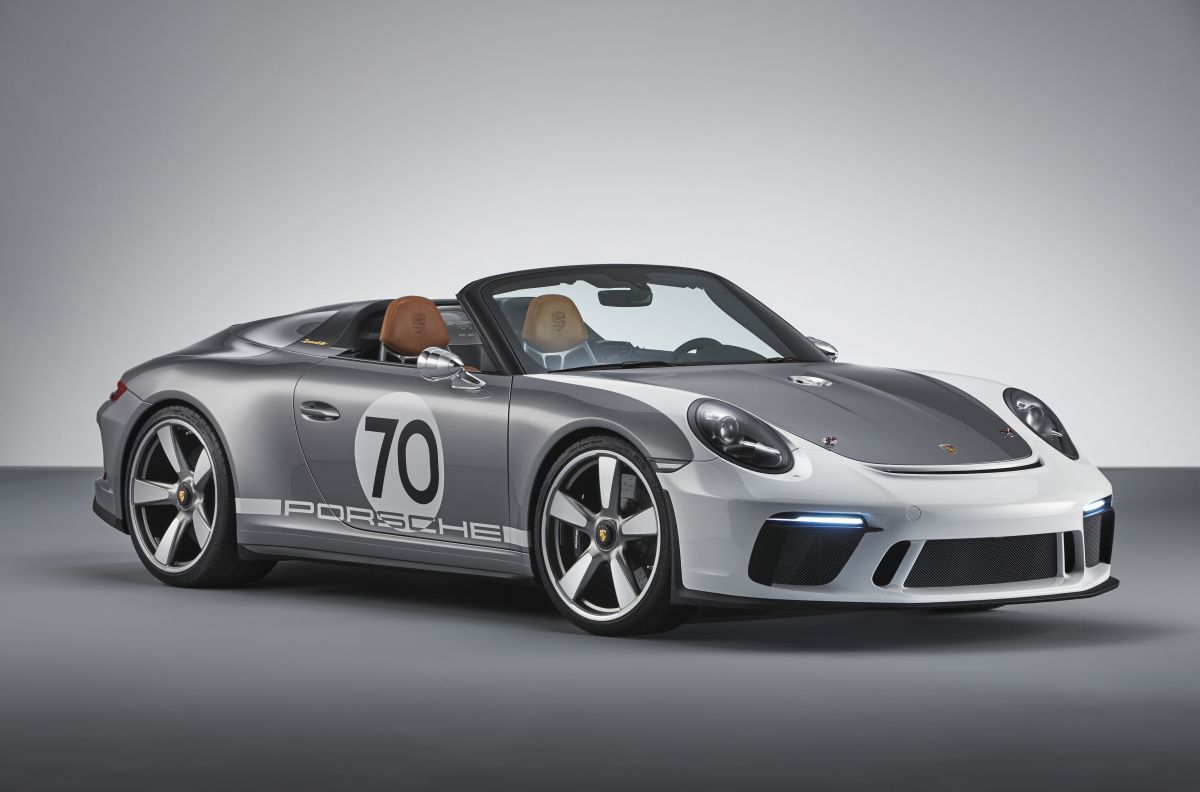 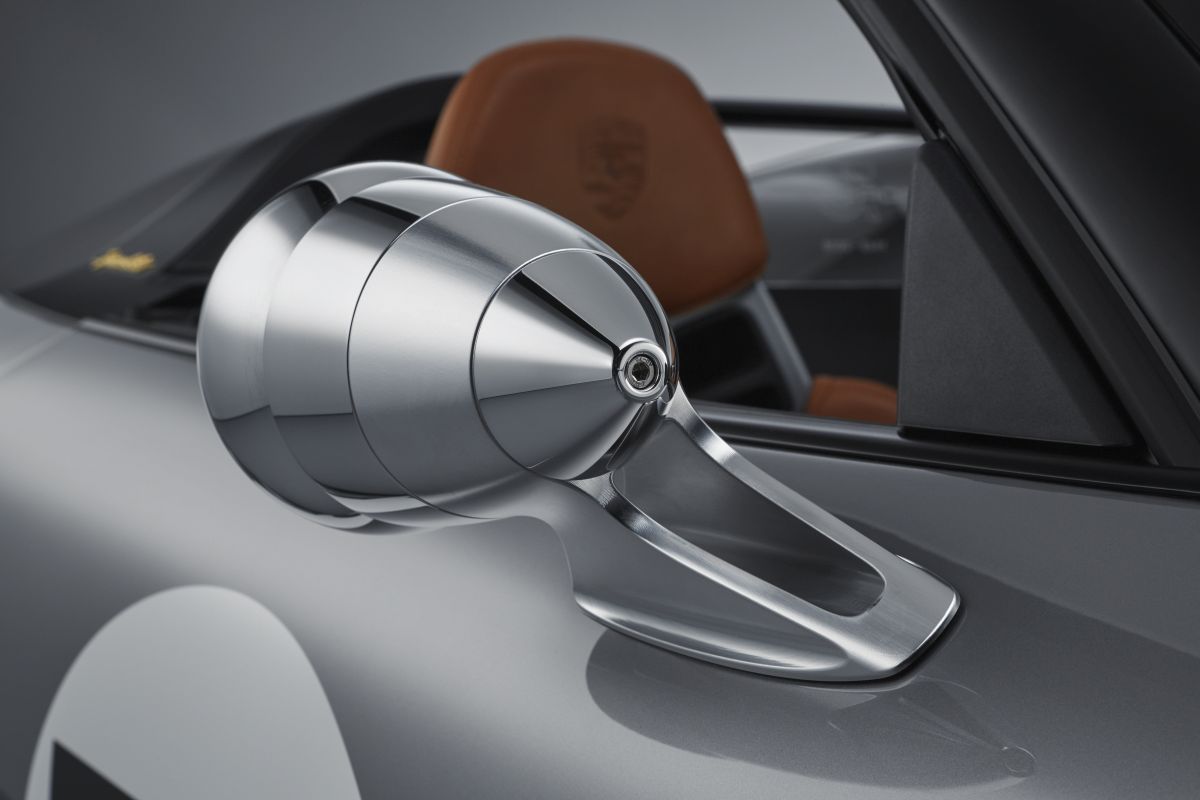 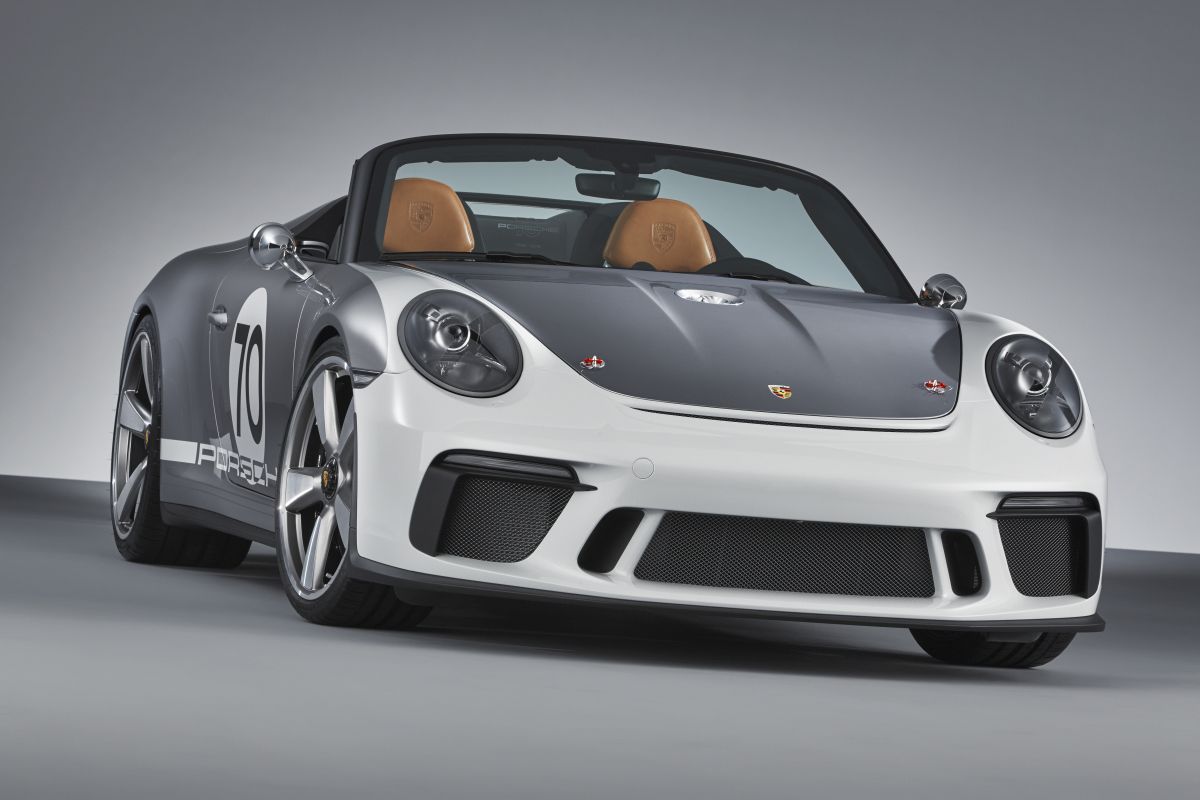 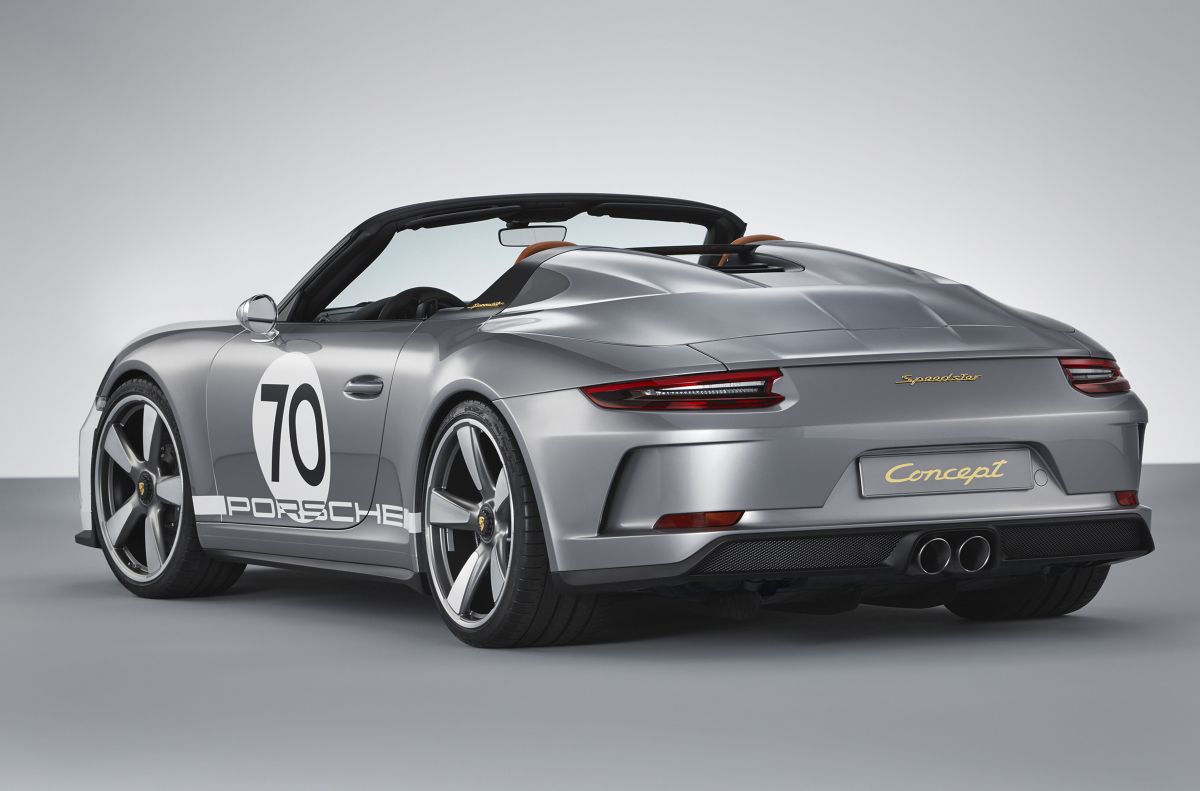 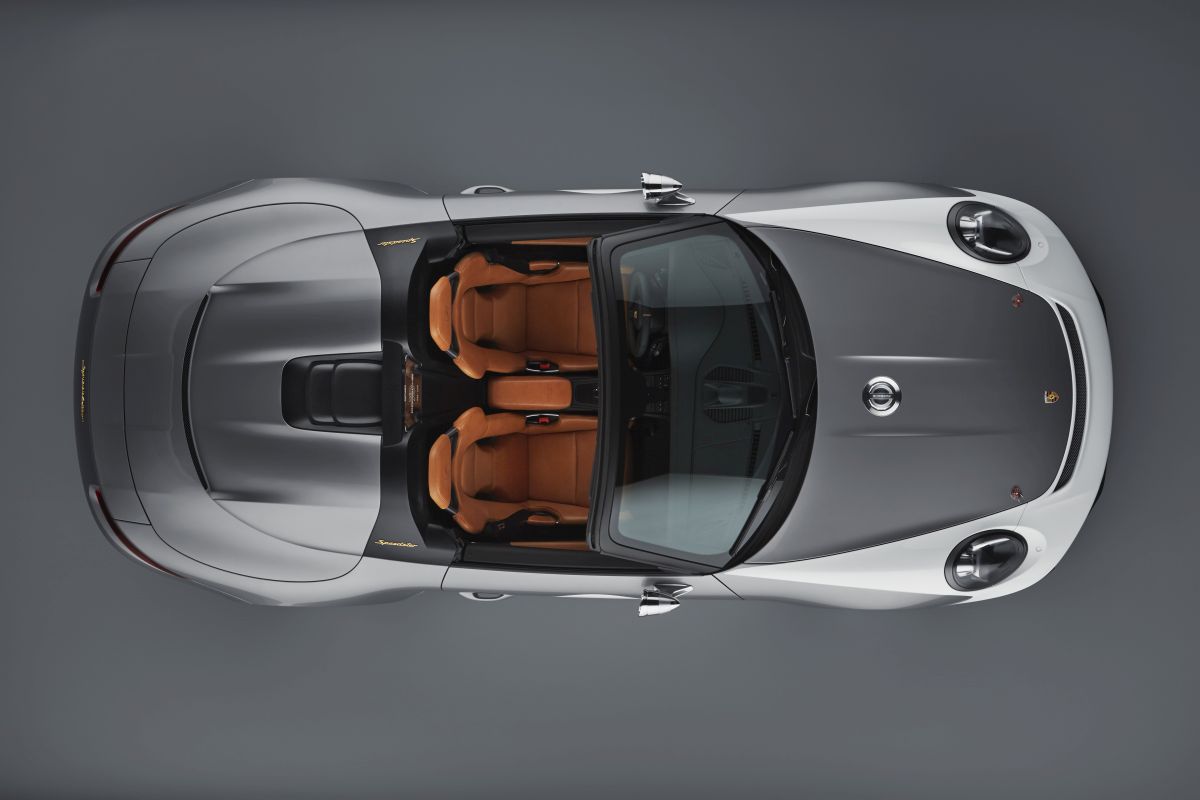 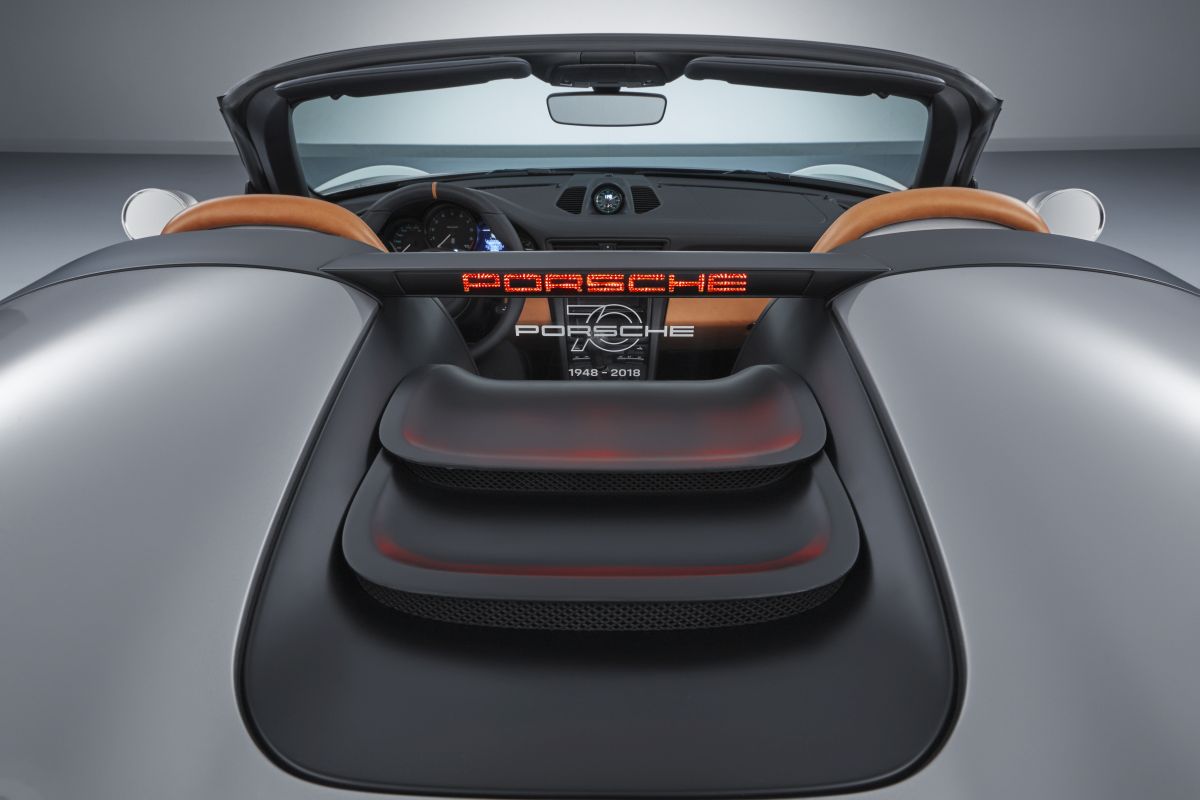 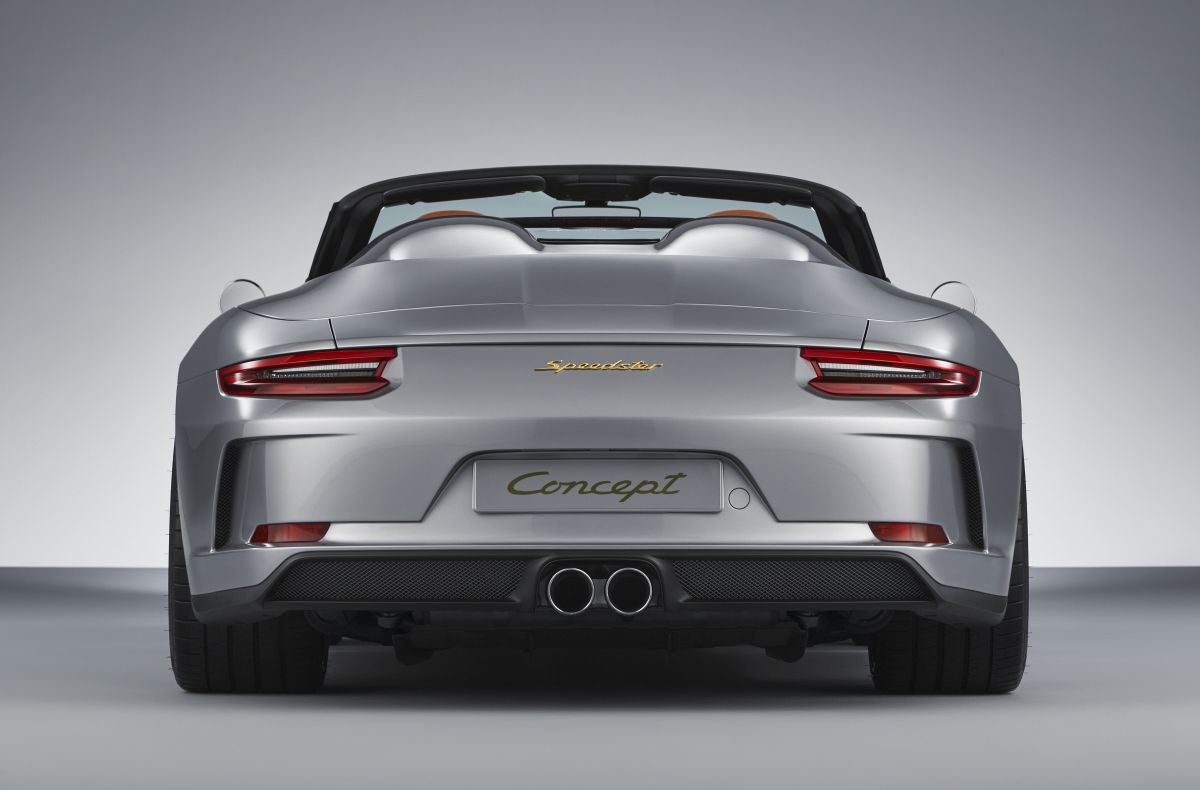 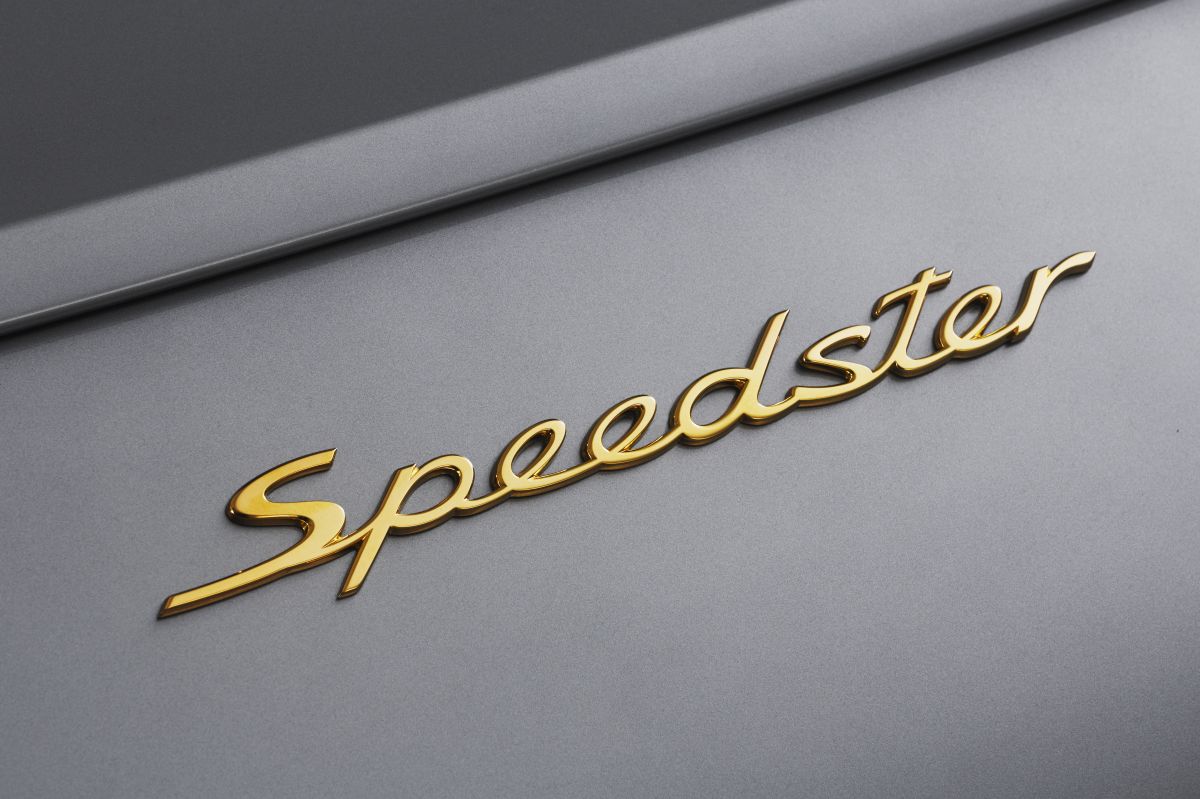 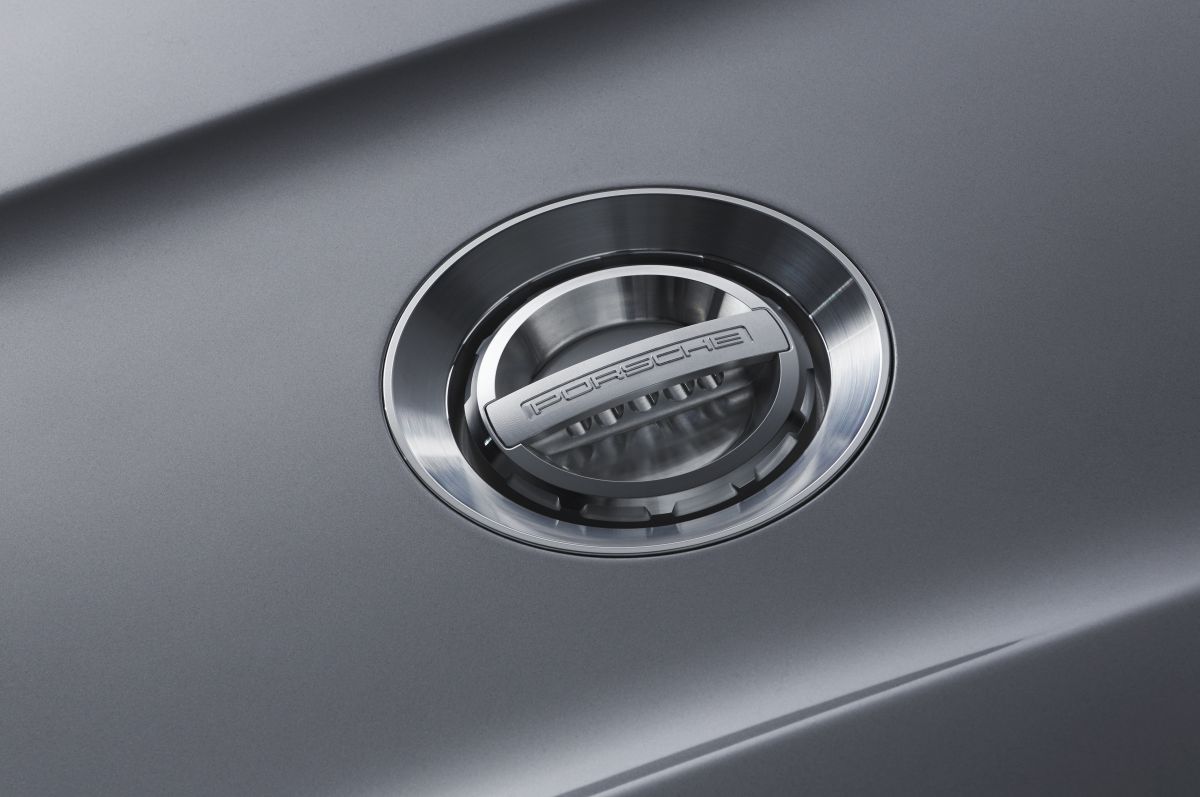 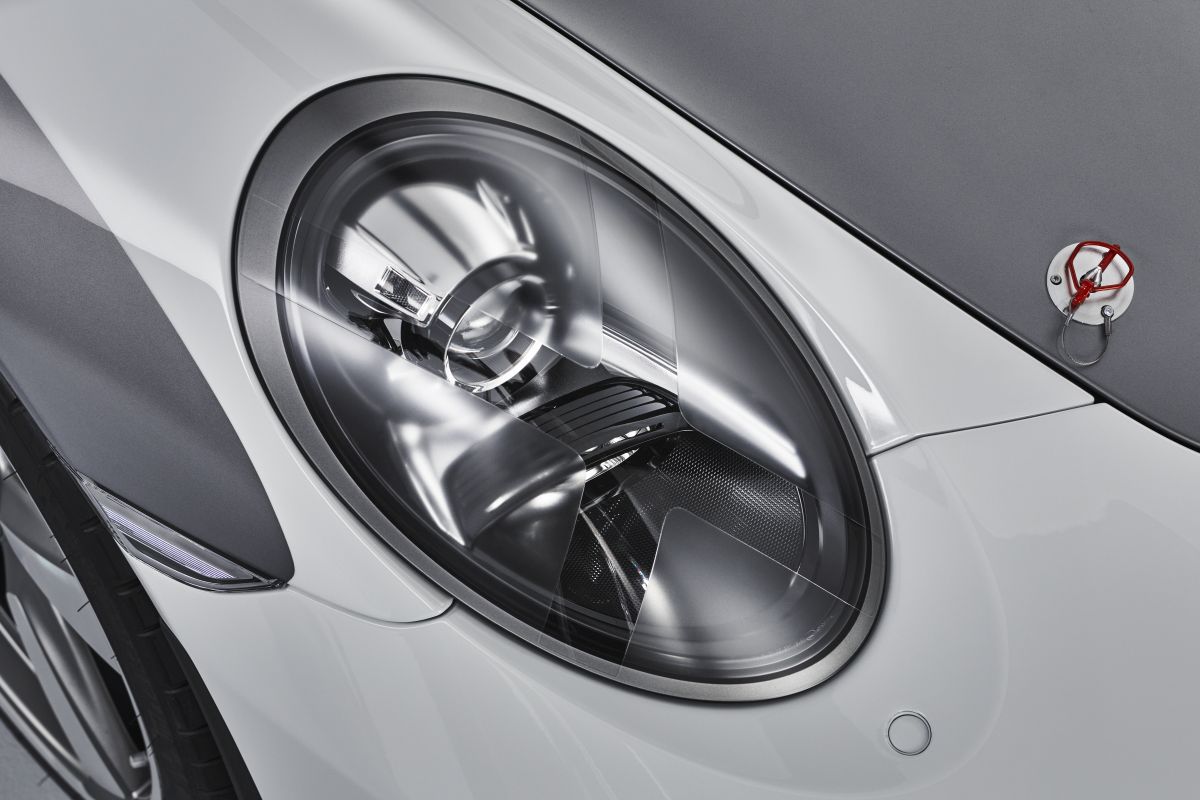 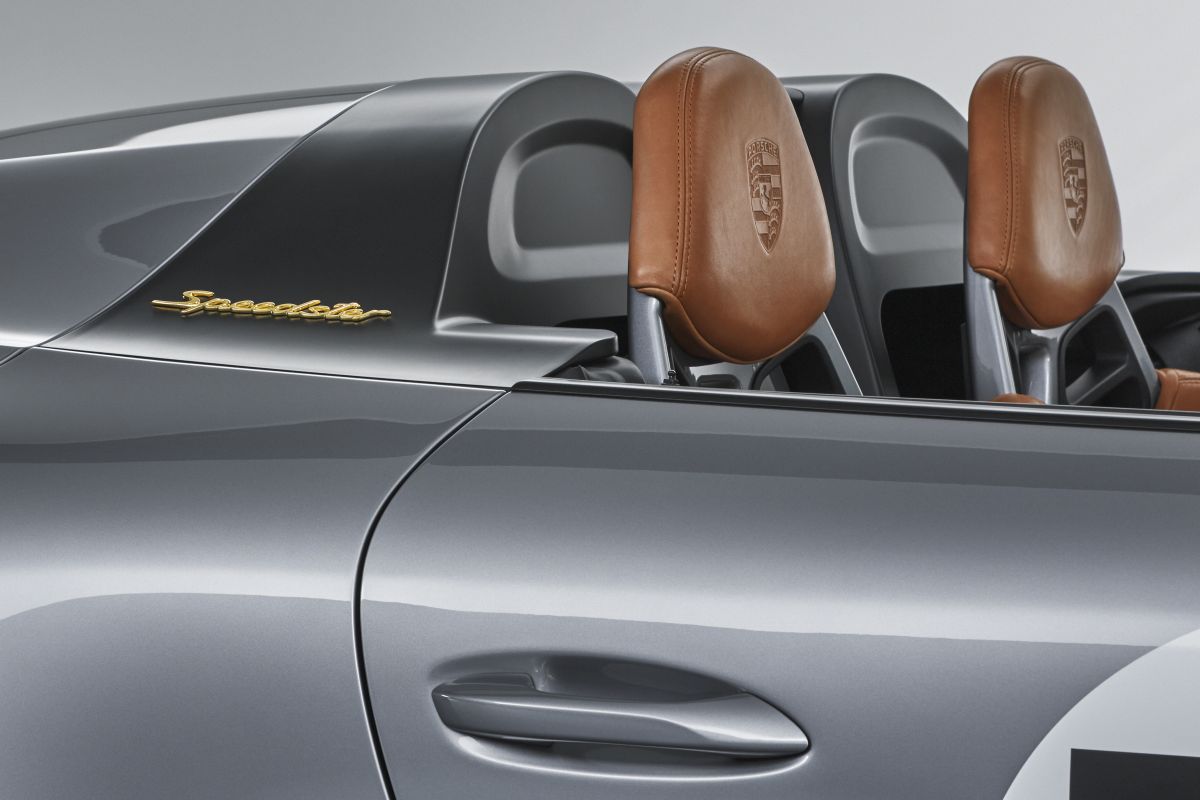 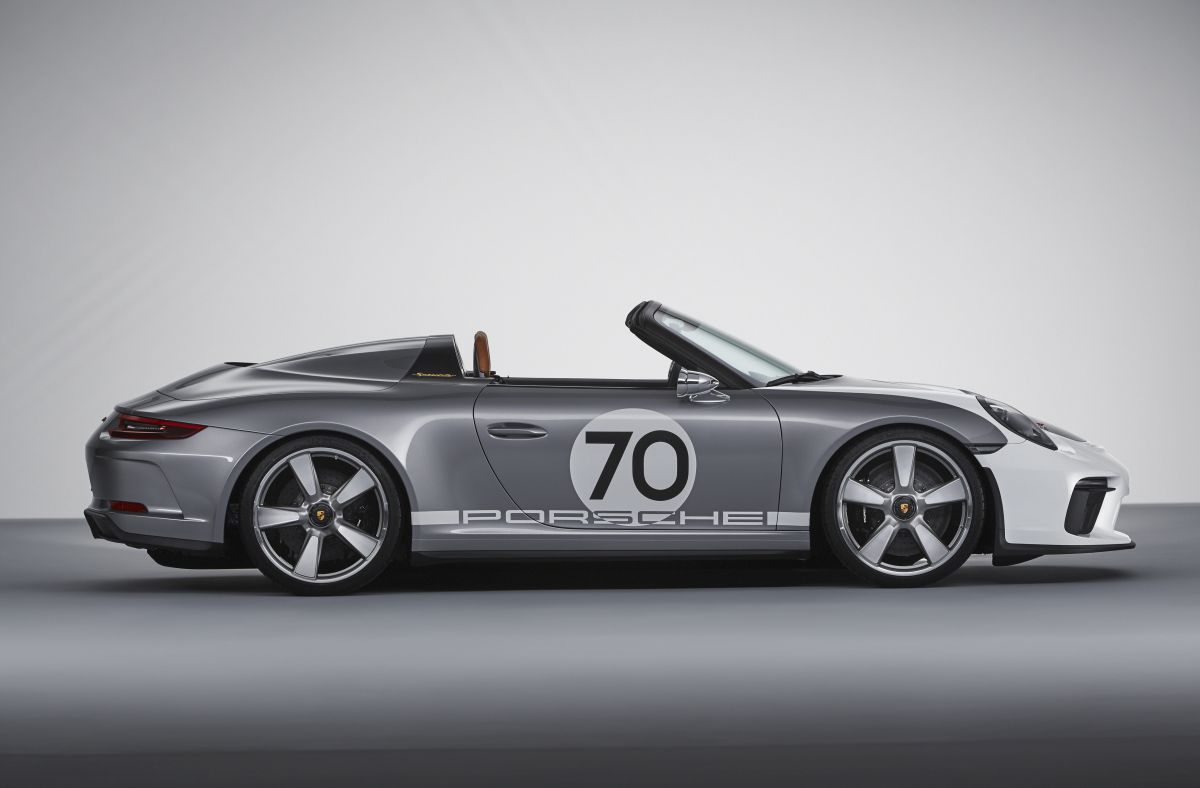 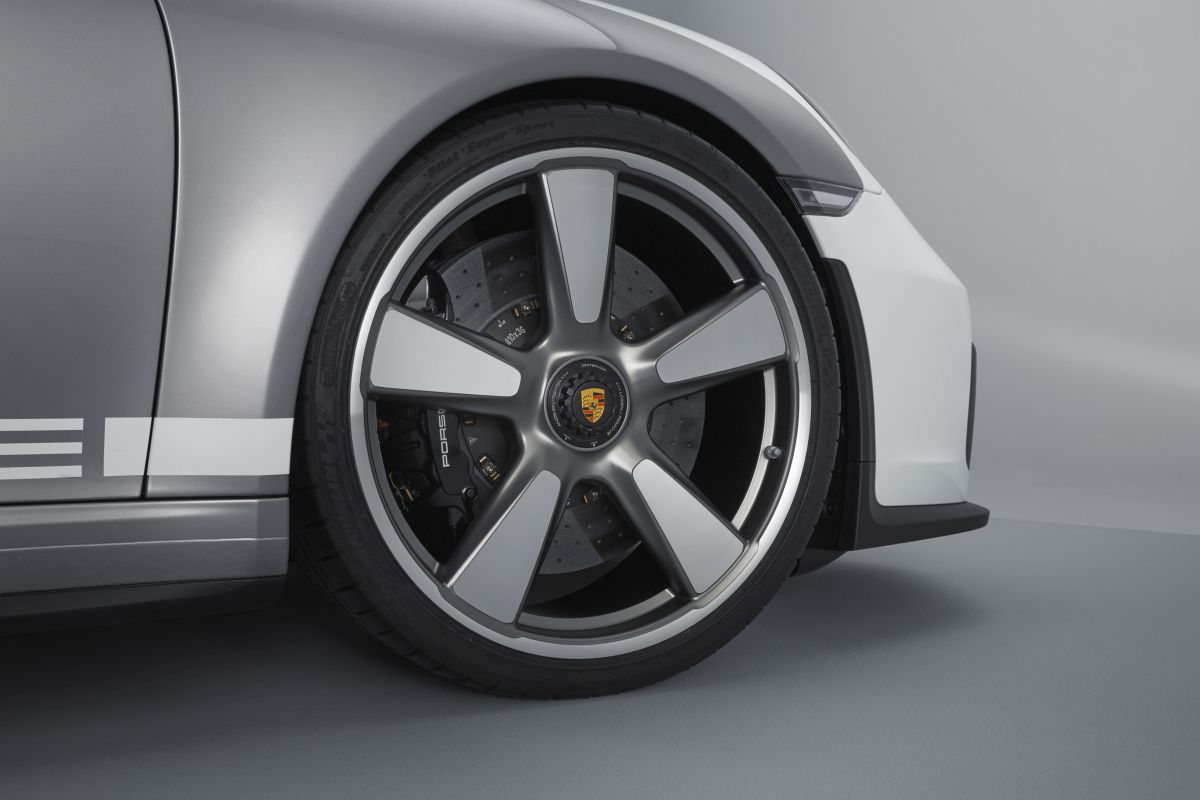 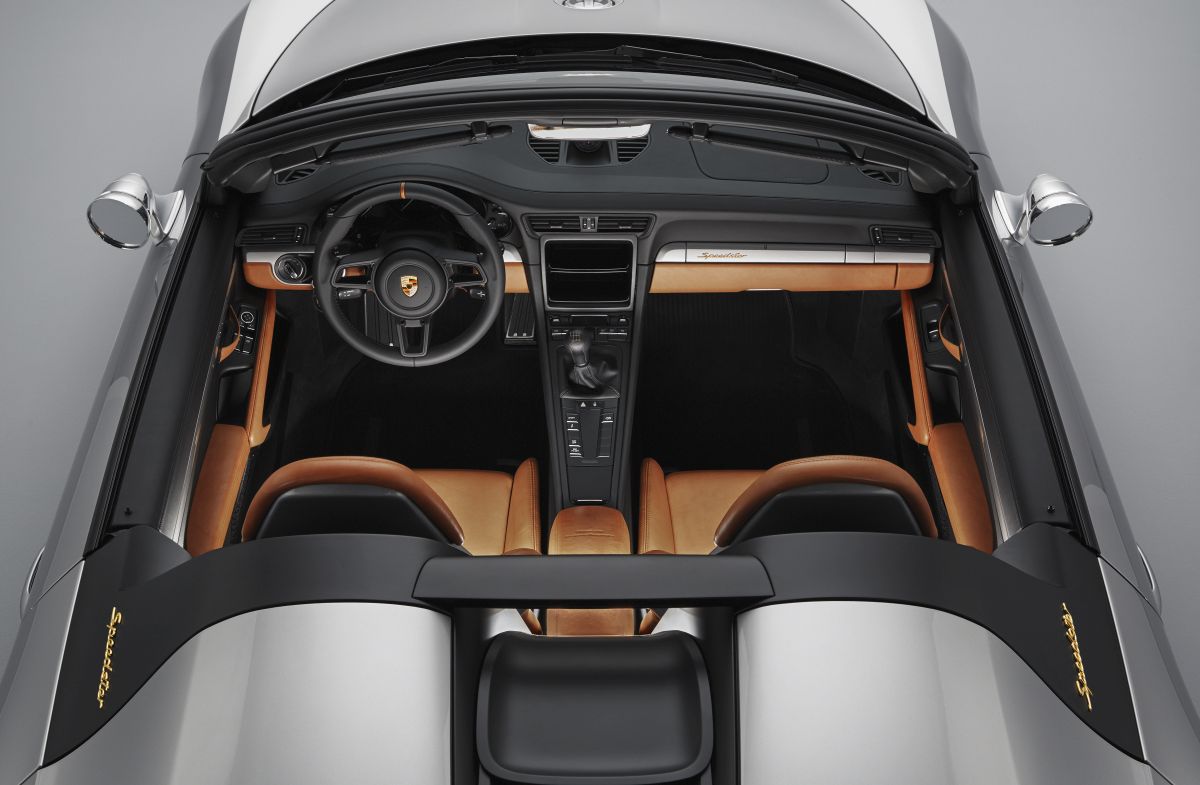 The Porsche 911 Speedster Concept: open-top, pure and with over 500 hp

Stuttgart. Porsche will be giving itself an excellent present for the 70th anniversary of its sports cars: the 911 Speedster Concept is a road-ready study of an open-top and particularly exciting sports car. It forges a link between the very first Porsche 356 ‘No. 1’ Roadster, which received its operating permit on June 8, 1948, and the Porsche cars of today. With its pure concept and historically accurate execution, the 911 Speedster concept reflects the brand essence of the Stuttgart-based sports car manufacturer with precise clarity. A pure driving experience is the main emphasis of the car. The drive technology under the two-tone shell of the concept study is derived from the current GT models. It was developed at the Porsche Motorsport Centre, which is the birth place of the 911 GT2 RS and, most recently, the GT3 RS. The 911 Speedster Concept celebrated its world premiere as part of the official ‘70 years Porsche sportscar’ anniversary celebrations in Zuffenhausen. The concept study offers a glimpse of a potential series-production version, although this model may not be presented until 2019. A decision on whether to move ahead will be made in the coming months.

The characteristics of the 911 Speedster Concept include the shorter window frame with a more inclined windscreen and correspondingly shortened side windows. These features give the sports car study an even stockier profile with a very low fly line, which is reminiscent of its predecessors such as the Porsche 356 1500 Speedster. A special rear cover made of carbon fibre connects behind the front seats, covering a roll-over protection structure and featuring a ‘double bubble’, a traditional element of this sports car design since the 911 Speedster from 1988. Two contrasting black slats between the ‘humps’ add an aerodynamic touch, and a transparent Plexiglas wind deflector features an engraved ‘70 years of Porsche’ logo.

As dictated by the historic original, the 911 Speedster Concept also features a lightweight tonneau cover instead of a convertible top. This cover protects the car interior from rain when parked, and is attached using eight Tenax fasteners. The lightweight principles of the Speedster philosophy continue through into the interior, where the navigation, radio and air conditioning systems have all been eliminated. The full bucket seats are made of carbon, and the light brown Aniline leather covers in Cognac 356 pick up on features from the car’s classic predecessors.

The broad body of the concept car has been borrowed from the 911 Carrera 4 Cabriolet, although the wings, front bonnet and rear cover of the concept are made of lightweight carbon-fibre composite material. The paintwork in the traditional colours of GT Silver and White harks back to Porsche’s early racing cars – as do many of the other carefully crafted details, such as the 50s-style central fuel tank cap positioned in the middle of the front bonnet, the classic Talbot shape of the exterior mirrors or the unique design of the main headlights. Transparent and opaque surfaces on the headlight covers produce a cross-like effect and are nod to a practice prevalent in Porsche’s early years in motorsport. At the time, the original headlights were taped before races to protect them against stone chipping and to prevent the glass from shattering. The wide B-pillars and the rear are decorated with milled, gold-plated Speedster lettering.

Below the bodywork, the 911 Speedster Concept relies on state-of-the-art components. The chassis essentially comes from the 911 GT3, with contrasting high gloss polished clover-leaf details on the imposing 21-inch rims in Fuchs design. It is the first time that these wheels are presented with centre locks. The GT developers also contributed the exhaust system with titanium tailpipes and the powertrain, which includes a six-speed manual transmission. The six-cylinder flat engine in this minimalist concept study delivers over 500 hp and reaches speeds of up to 9,000 rpm.

The history of Porsche Speedster models begins in the USA

Speedster variants of sports car models, which combine open-top driving pleasure with incredibly distinctive driving dynamics, have been part of the Porsche company history since 1952. The forefather of Porsche Speedster models, the 356 1500 America Roadster, had an aluminium body manufactured entirely by hand. It weighed 60 kilograms less than the 356 Coupé and its top speed of 175 km/h with its 70-hp four-cylinder flat engine was an impressive feat at the time. Featuring slot-in windows for the doors, a folding rain-cover top and lightweight bucket seats, this car developed exclusively for the US market was built just 16 times and already embodied several key elements of the Speedster design.

By 2010, eight different series and special models had been created with the ‘Speedster’ byname. The 356 A 1500 GS Carrera GT Speedster represented a highlight in 1957, and the first 911 Speedster followed in 1988. The 356 units of the 911 Speedster produced for the 997 series in 2010 saw a temporary end to the production of Speedster variants.

In a special exhibition at the Porsche Museum, the company is now showcasing numerous stories and milestones with which Porsche has decisively influenced the development of the sports car since 1948 and continues to do so today. Its aim is to highlight outstanding Porsche developments over the past seven decades.

The sports car manufacturer is also celebrating this anniversary with numerous activities around the world throughout 2018. Tomorrow, June 9, Porsche will be inviting fans to its Sports Car Together Day at all of its sites around the world. On the weekend of June 16–17, the sports car manufacturer will host employees, residents of the Zuffenhausen district and prospective customers at a celebration in and around the plant in Stuttgart.

The Festival of Speed, held from July 12–15 at Goodwood in the UK, will also celebrate the anniversary, as will Rennsport Reunion in California from September 27–30. The celebrations will conclude with the “Sound Night” event which will be held for the first time in the Porsche Arena in Stuttgart on October 13.