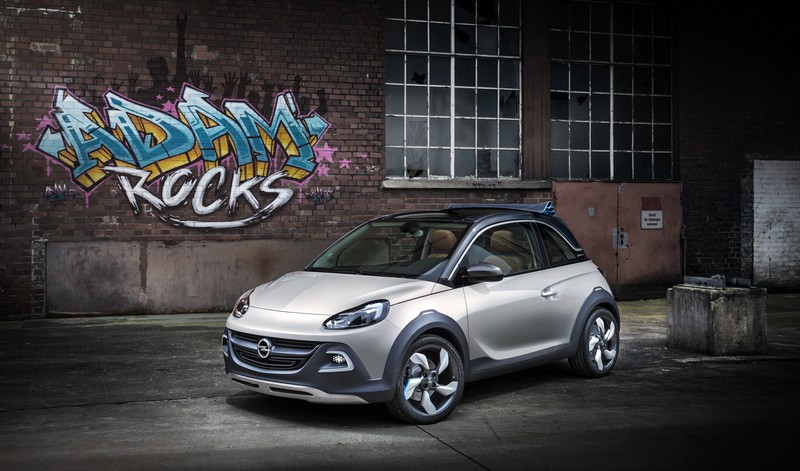 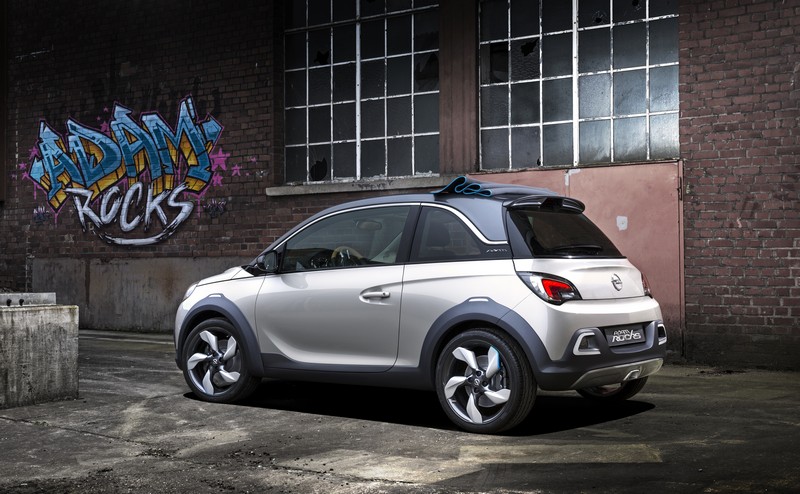 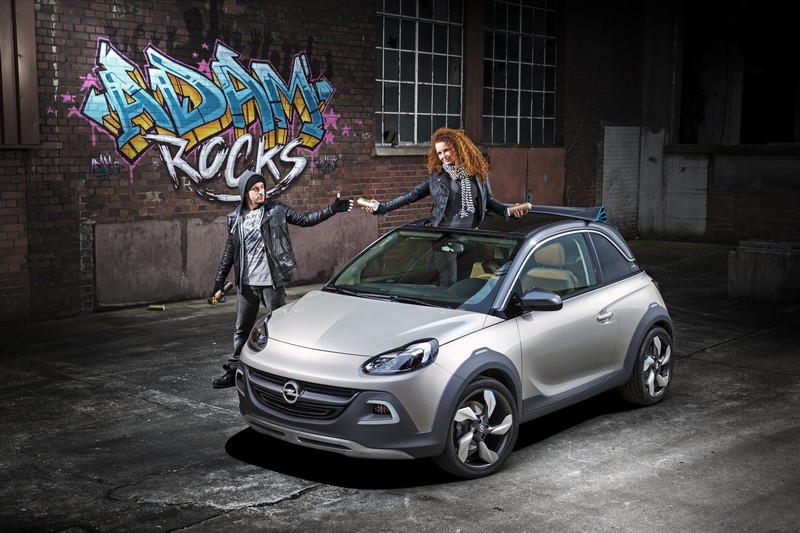 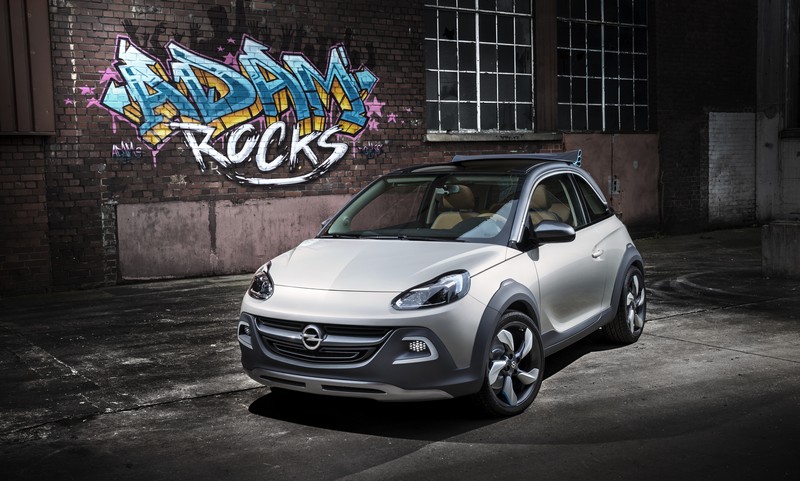 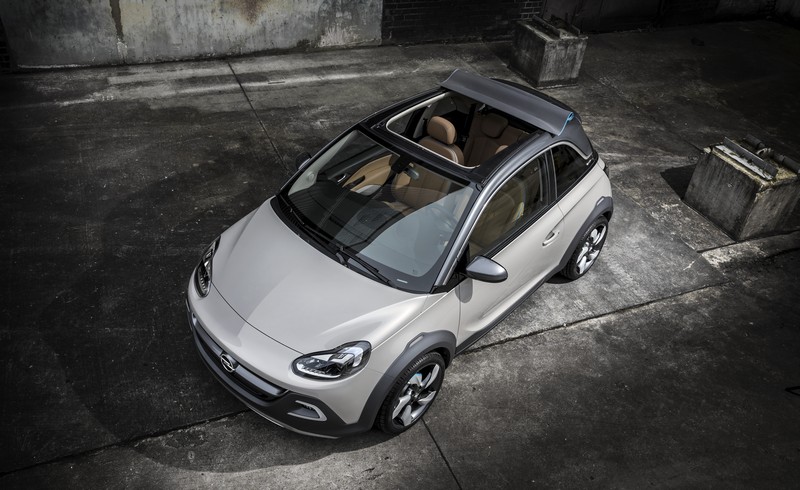 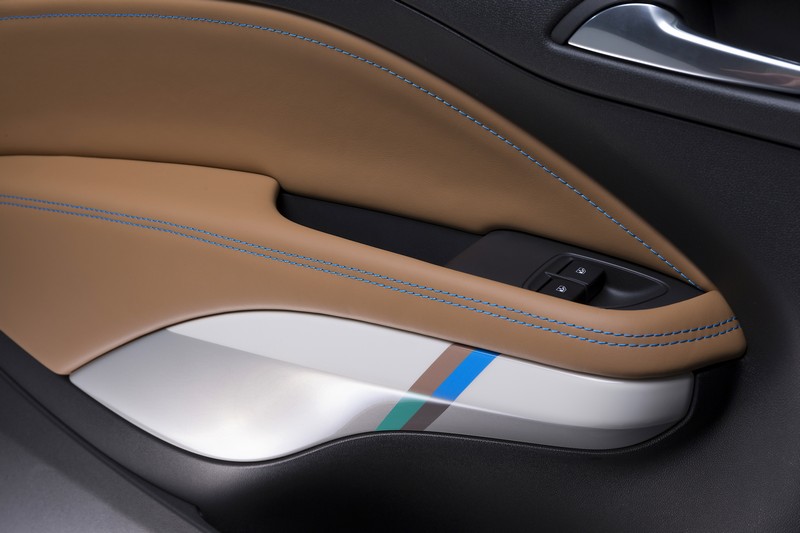 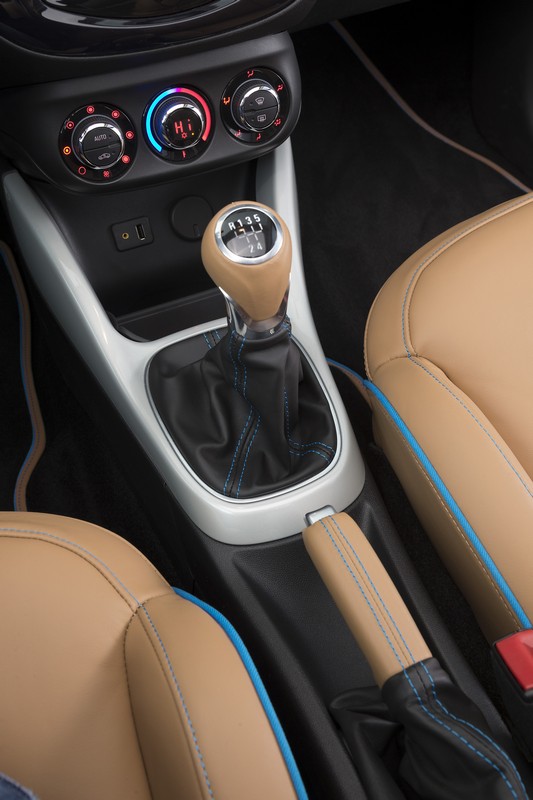 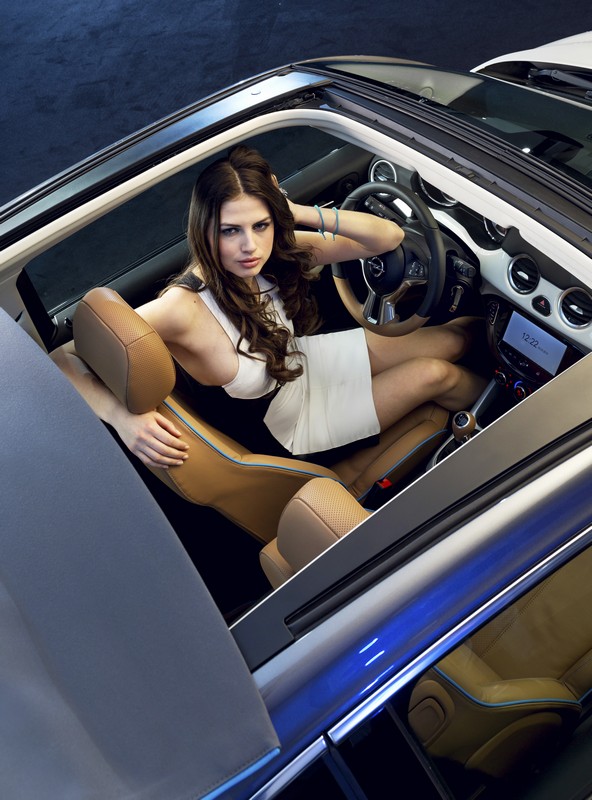 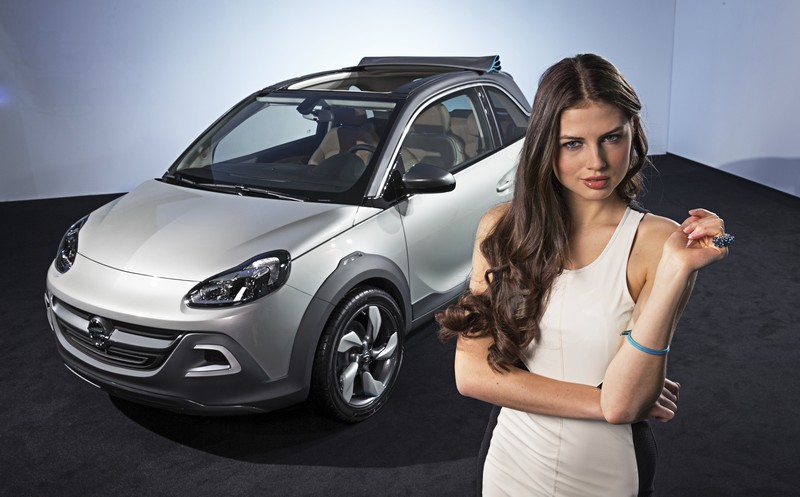 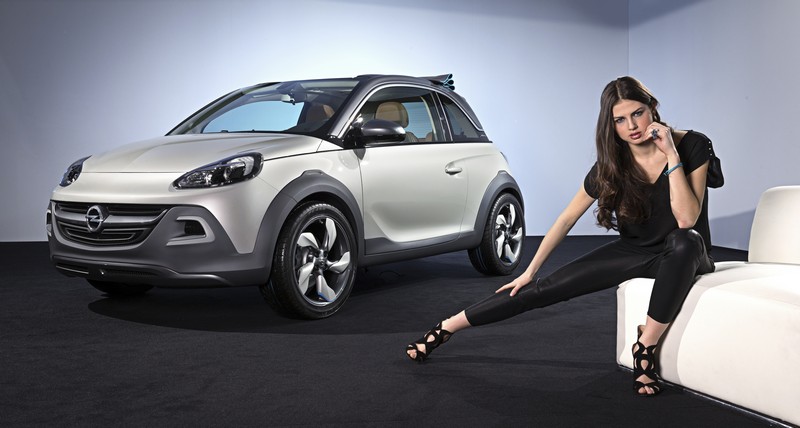 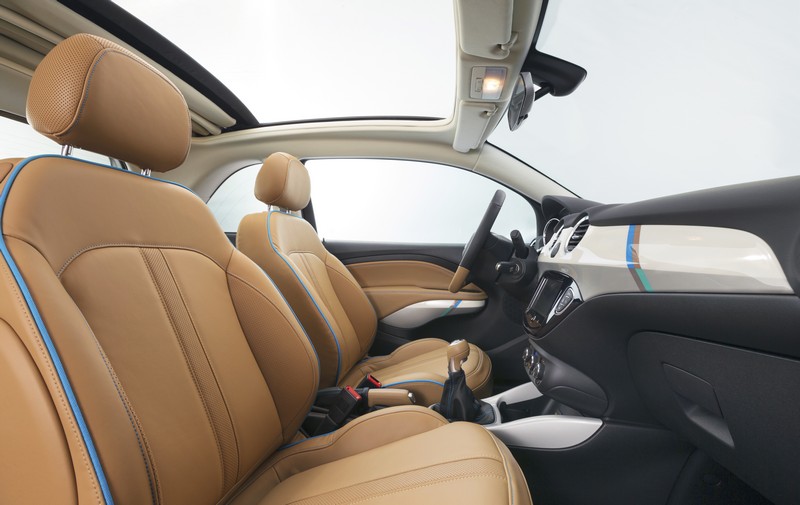 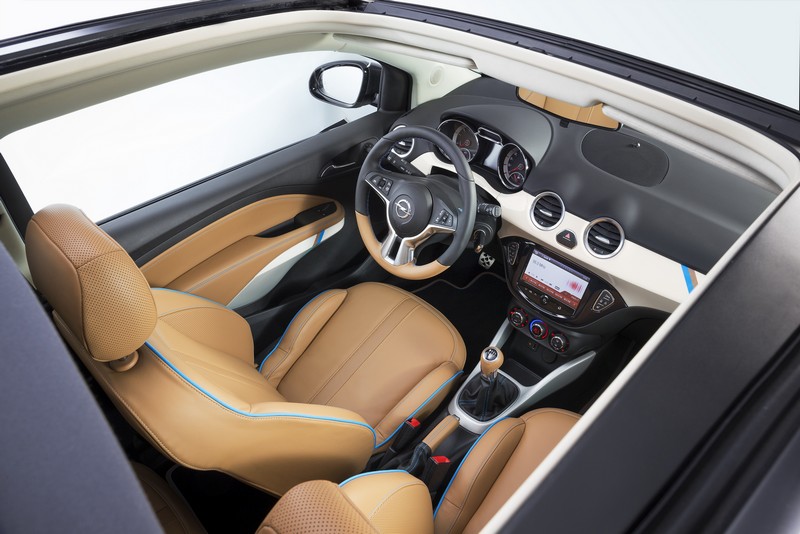 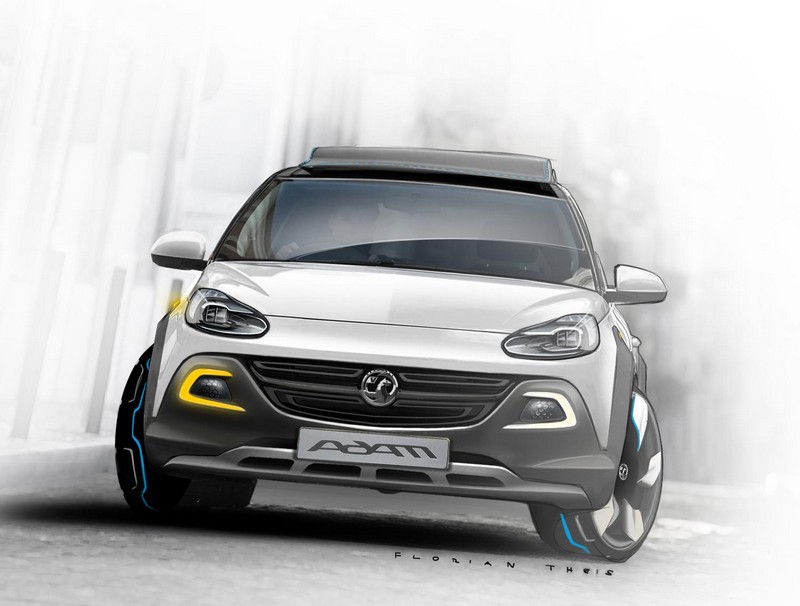 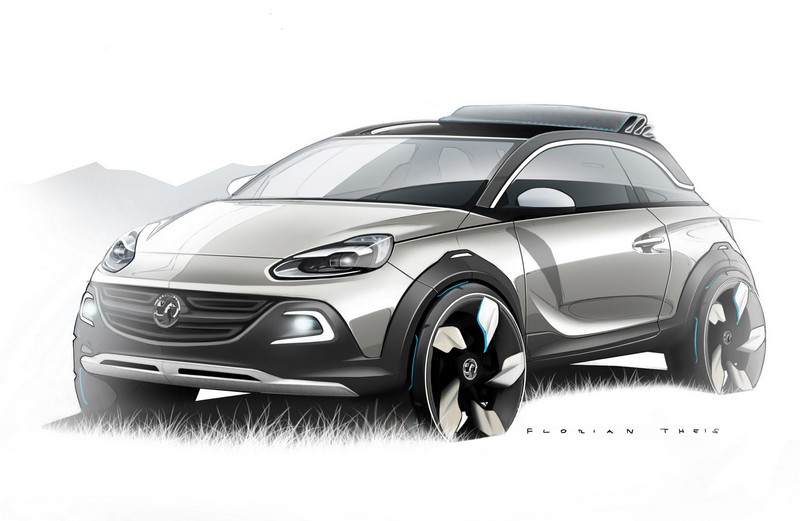 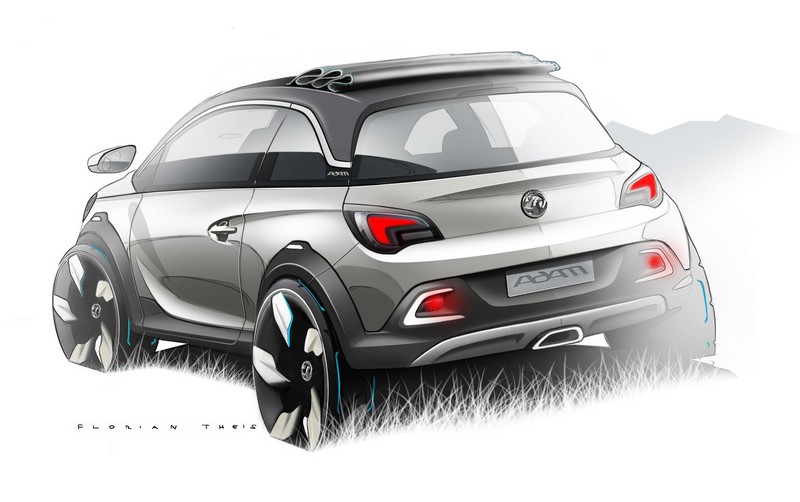 - New ROCKS Concept raises ADAM to the next level of individualization

Geneva/Rüsselsheim. Offering 61,000 exterior variations and nearly 82,000 for the interior, as well as a state-of-the-art IntelliLink infotainment system, the lifestyle Opel ADAM is the true champion of individualization – and the best connected small car around. But that is not enough for Opel. At the Geneva Motor Show, Opel shows that it explores ways of further enhancing ADAM’s individualization and reveals an urban mini-crossover study called ADAM ROCKS. With its new 3-door body style, its 3.70 meters in length, muscular proportions, fierce design and open-air capability, ADAM ROCKS also is a proposal for opening a new segment of the market.

Showcasing how ADAM’s unique personalization program can get another twist, the ROCKS Concept has been created for those seeking personal freedom ‘off the beaten track’ beyond the urban landscape. Inspired by Parkour urban athletes, it is higher and wider on its wheels, tougher and more compact in appearance. The ADAM ROCKS’ special feeling of personal freedom is further emphasized by its cabrio looks and fabric roof that offers a free view of the sky above. The fabric extends across the entire width and length of the roof, right back to the C-pillars.

“With even bolder design than any other ADAM, the ROCKS is an impressive demonstration of how much more potential for individualization our new small lifestyle car still offers after its market launch. It combines the toughness of a crossover with the coolness of open air driving,” says Malcolm Ward, Opel/Vauxhall Lead Design Director. Describing the rationale behind Opel’s newest concept car, he explains: “As a symbol for fashion-led, active drivers wanting to stand out from the crowd, ADAM ROCKS is just one possible answer to the question of how new development paths for the absolutely unique car can be forged – and others will follow.”

The ROCKS Concept embodies the characteristic strengths of current ADAM models: just like them, it is an athletic small, urban lifestyle car with exciting design, unrivalled personalization and connectivity possibilities, and the best of German engineering. Its mature new crossover body style is supported by a chassis that is raised by 15 mm with a 40 mm wider stance. Agile “Parkour” athletes, who give city spaces another twist and dimension, were the inspiration for the ADAM ROCKS sporty urban crossover concept. Its look is emphasized by impressive ‘elbow and knee pads’: protective cladding around the side sills, as well as a centrally-located exhaust tailpipe in OPC style. The ADAM ROCKS’ assertive looks – with a prominent grille structure and LED headlamps – show this car means business. The boomerang shaped turn indicators, enclosing the fog lamps highlight this effect and, when off, they shimmer in opaque glass. This makes the ADAM ROCKS’ styling even more individual – just like the additional blinkers in the front side sills.

The car rides on large 18-inch wheels in Twister design featuring visible Brembo disc brakes. These wheels, which are fitted with innovative exchangeable wheel clips, are already available in ADAM’s production program. But the ROCKS Concept’s clips get a new, bolder, even more expressive design and a selection of new colors makes them stand out in contrast to the body’s various grey tones. Neon-blue stripes highlight the tire tread. This color motif is echoed in the interior and around the roof.

Clear view of the sky

The major benefit of this layout is that passengers can enjoy open-air driving fun without losing trunk space. The electric roof folds back via remote control in front of the C-pillars and does not protrude into the tailgate, leaving unrestricted access to the trunk’s full capacity. The additional weight caused by this system is minimal compared to a traditional, pure cabrio concept – a major criteria for a car of that size. The ‘networked’ roof’s special appeal is its intelligence: a special weather app, displayed on the color driver-information-center of the IntelliLink infotainment system, knows when a weather front is imminent and automatically initiates closing of the roof. Clever if, on a hot summer day, you leave your car open in front of your house and a storm arrives.

The high-quality level of individualization is also reflected in the ADAM ROCKS’ interior. Elegant Nappa leather upholstery in a Brandy-colored tone from the Cascada gives the ADAM concept cabin the premium feel of Opel’s new mid-size convertible – all within just 3.70 meters length. In typical ADAM style, the neon-blue piping contrasts superbly with the warm, light-brown leather. The piping is also used on the leather steering wheel and the gear shift lever. Additional splashes of color on the instrument panel, center console and door panel molding of the ROCKS Concept add a dashing touch – exactly that unmistakable design flair which distinguishes each and every ADAM. This ADAM rocks!