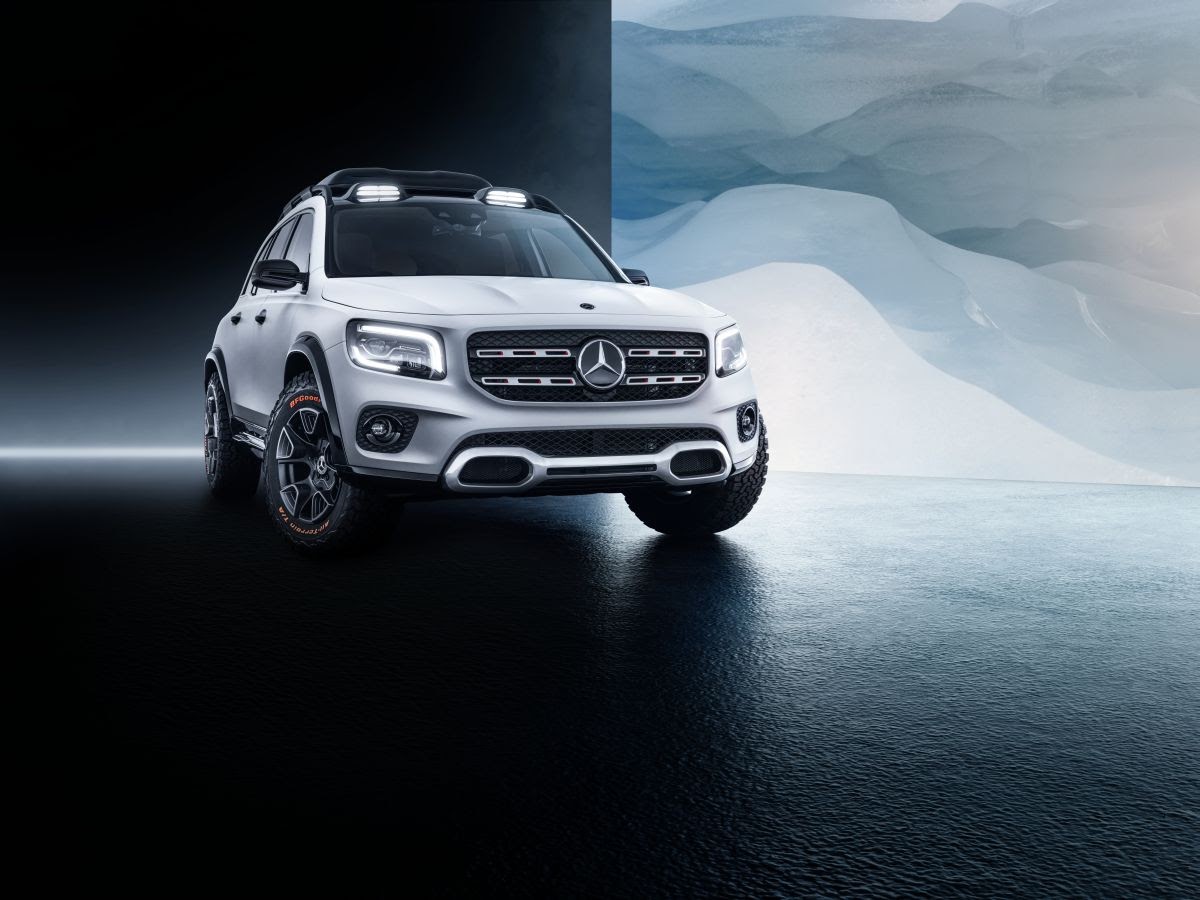 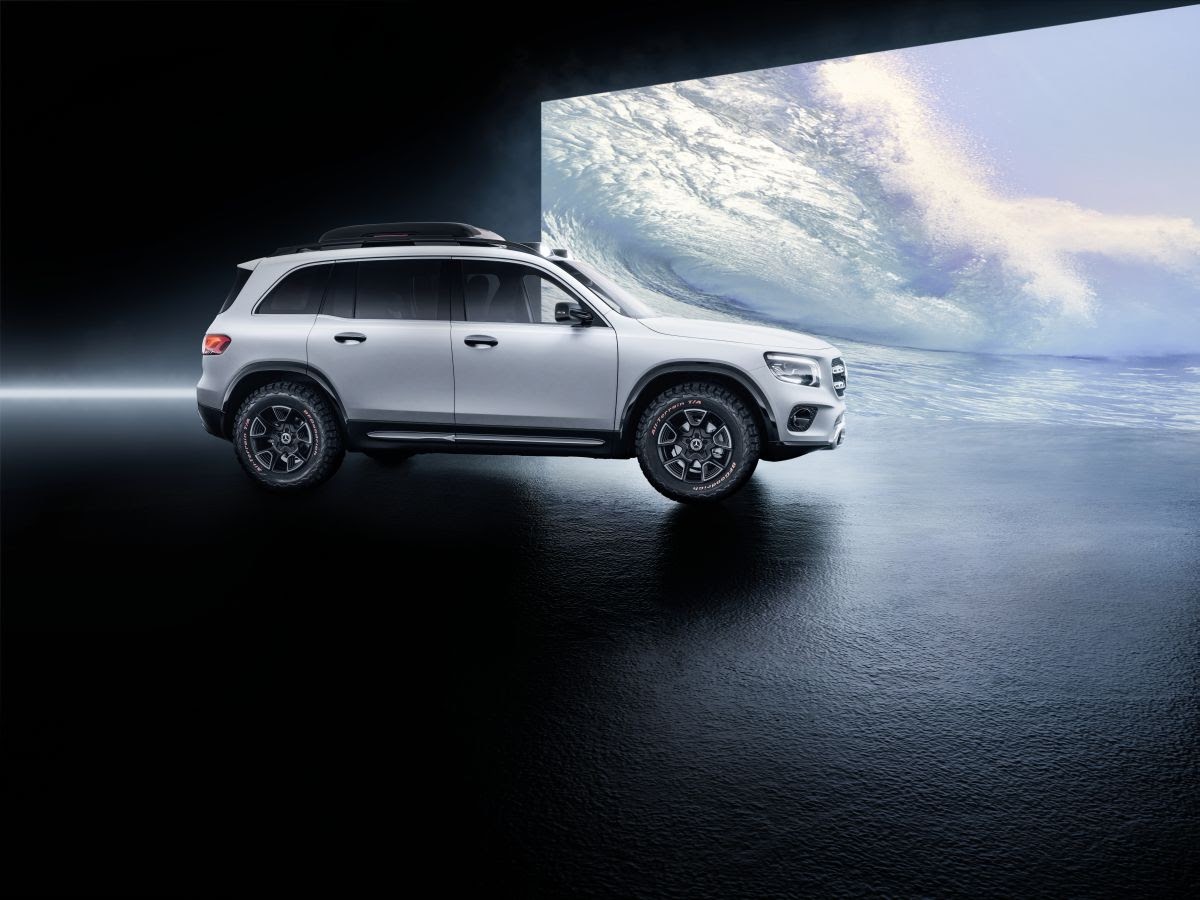 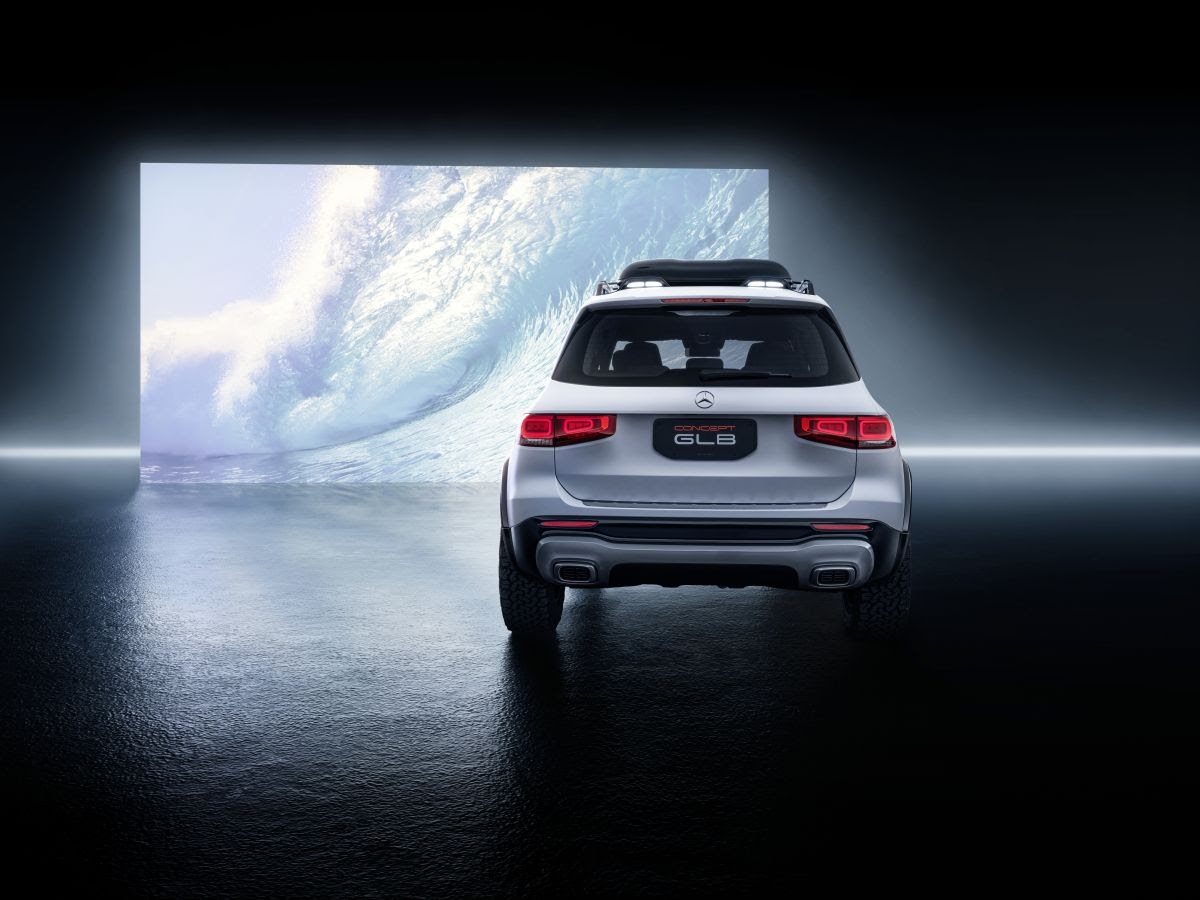 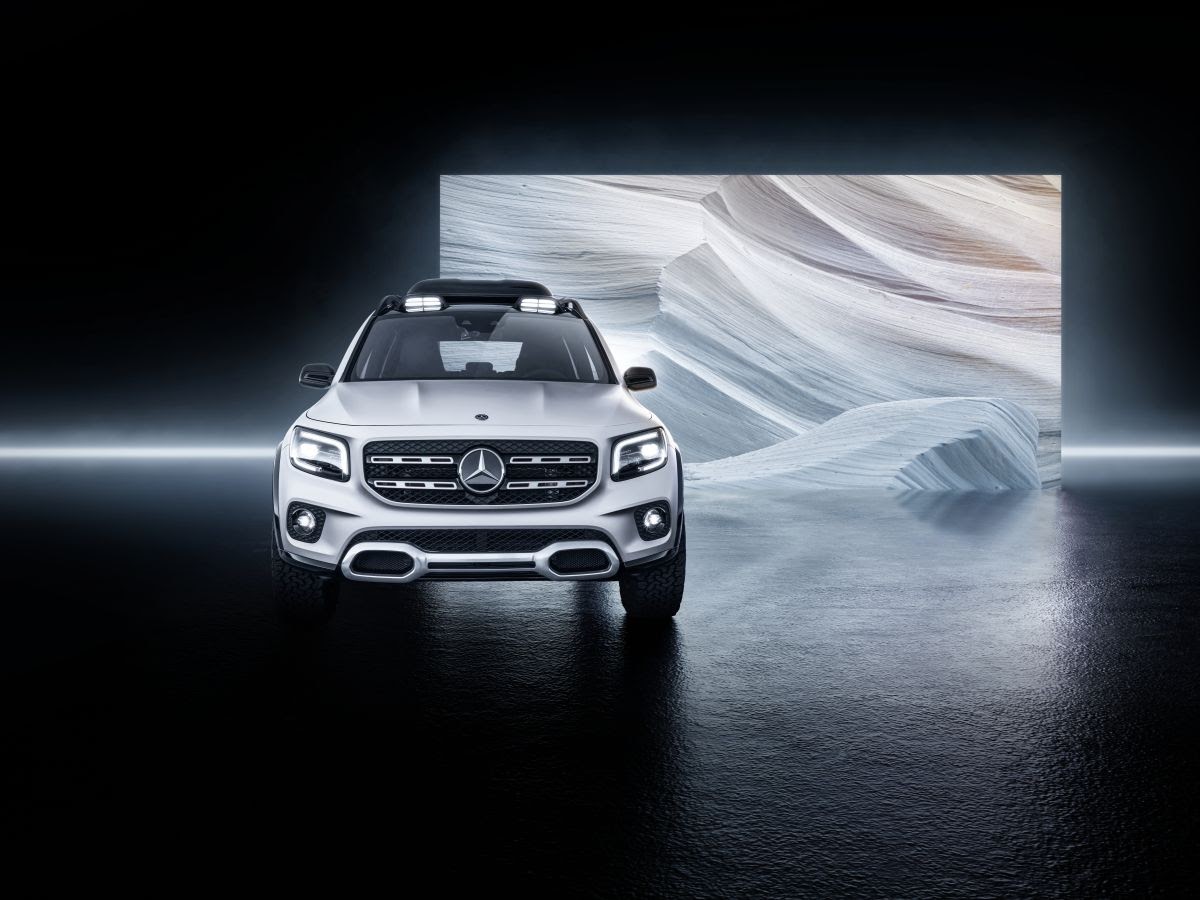 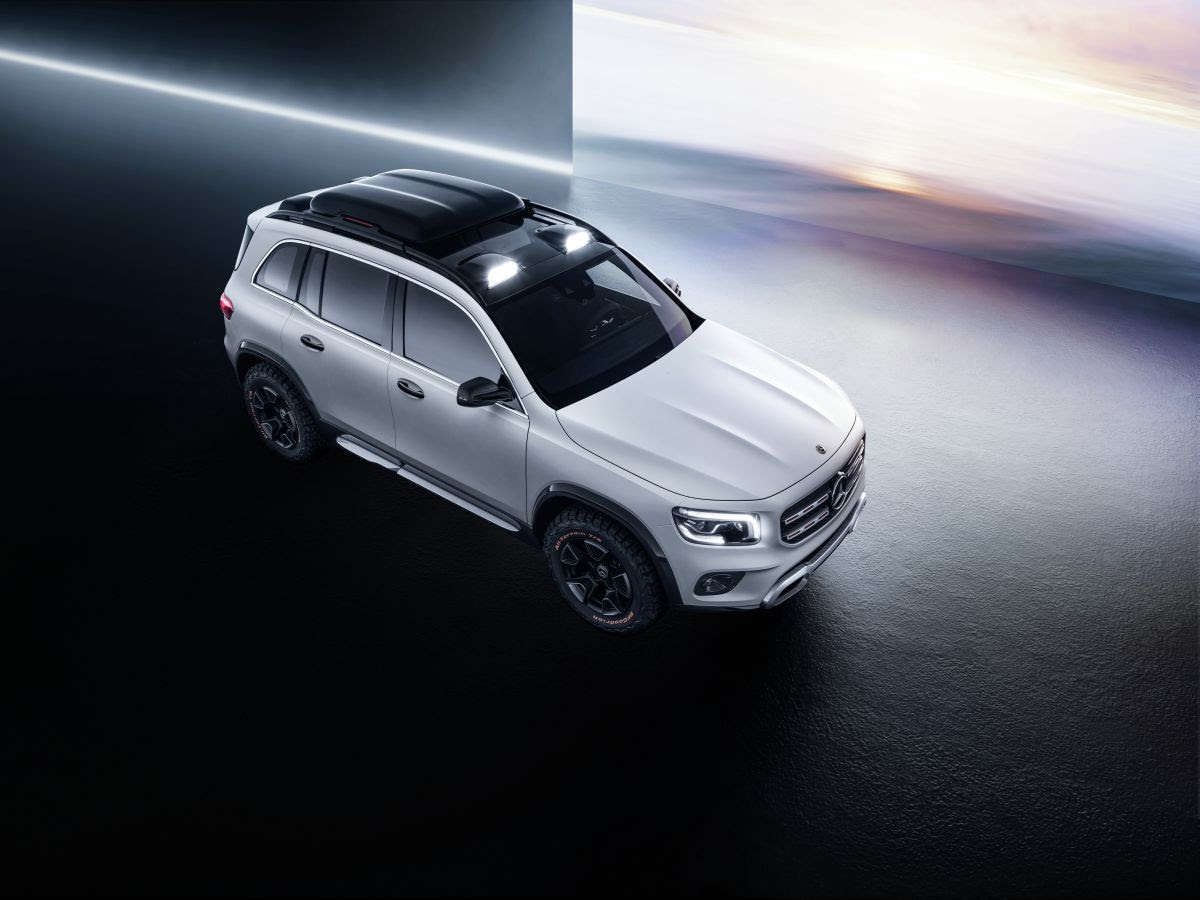 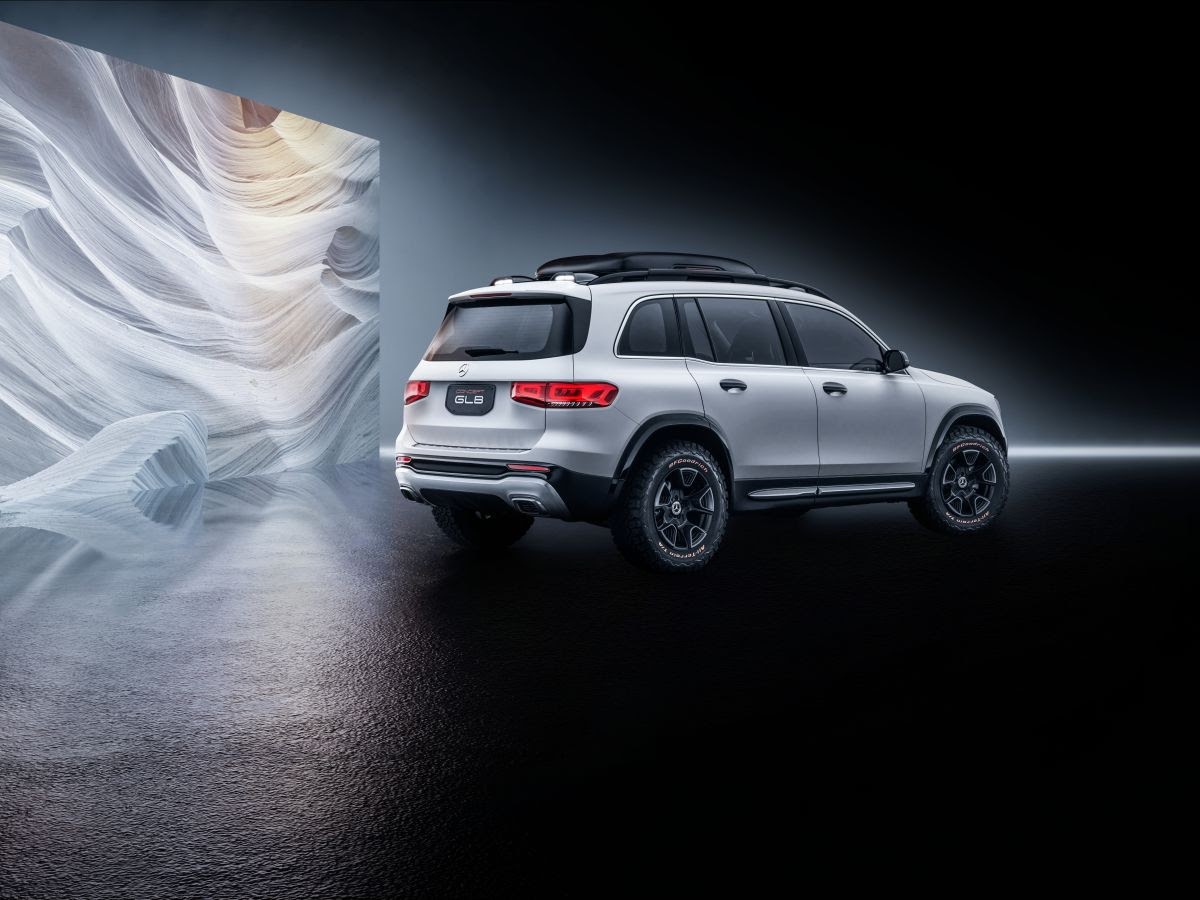 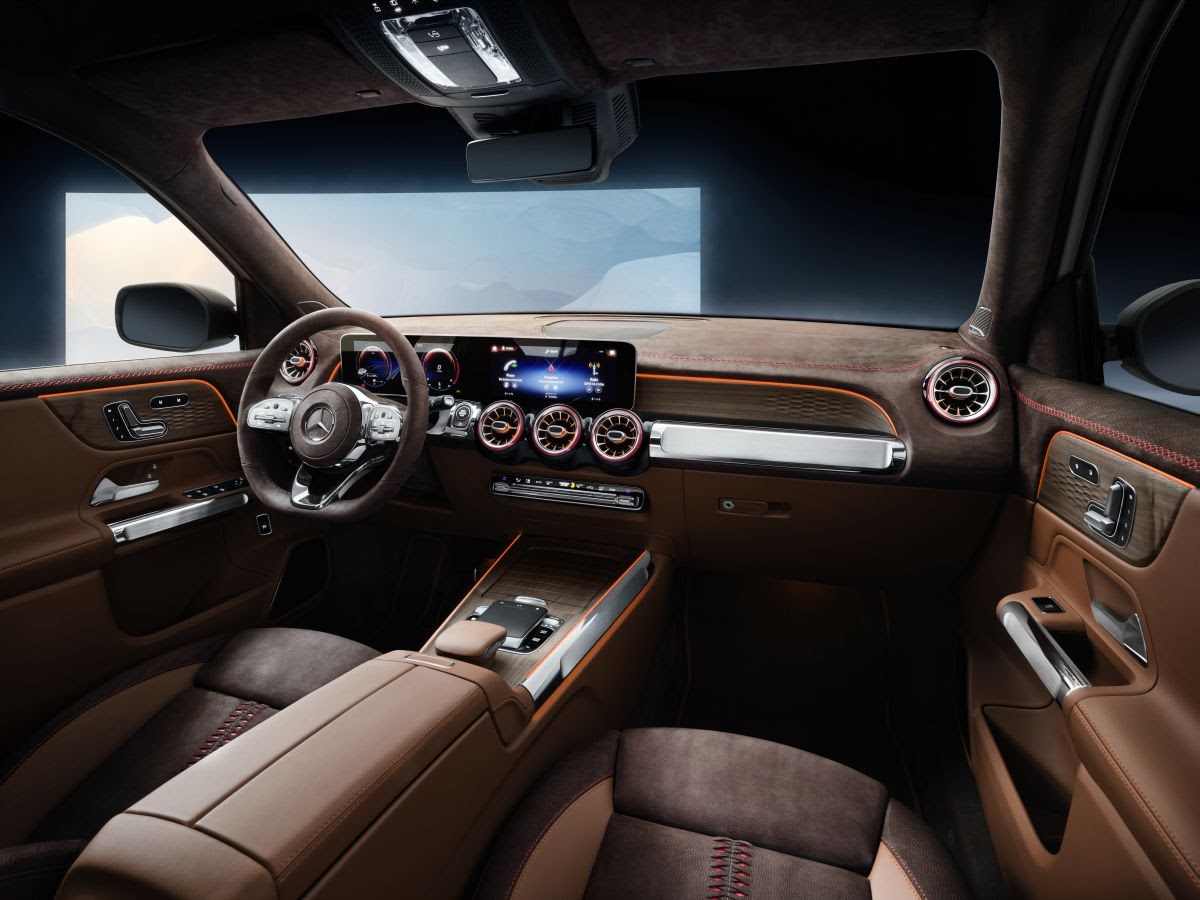 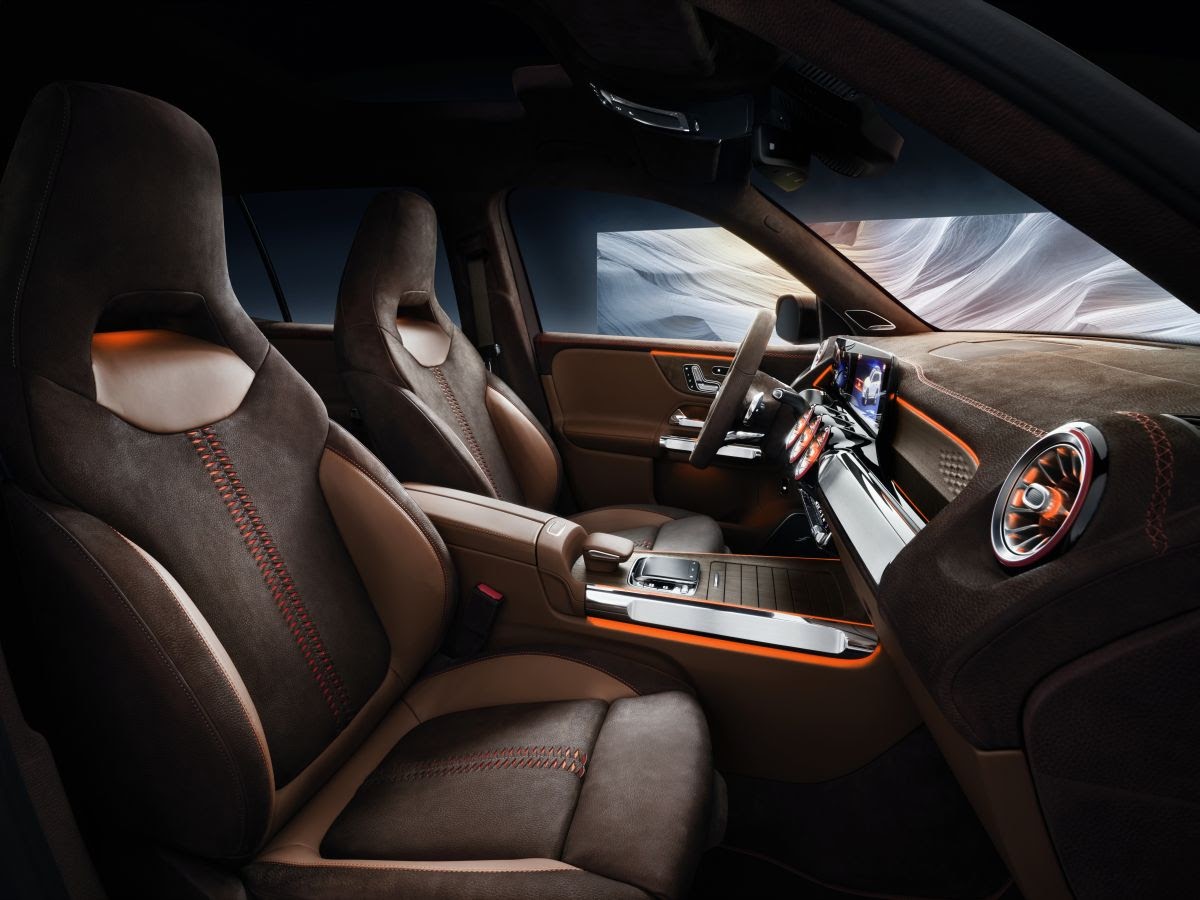 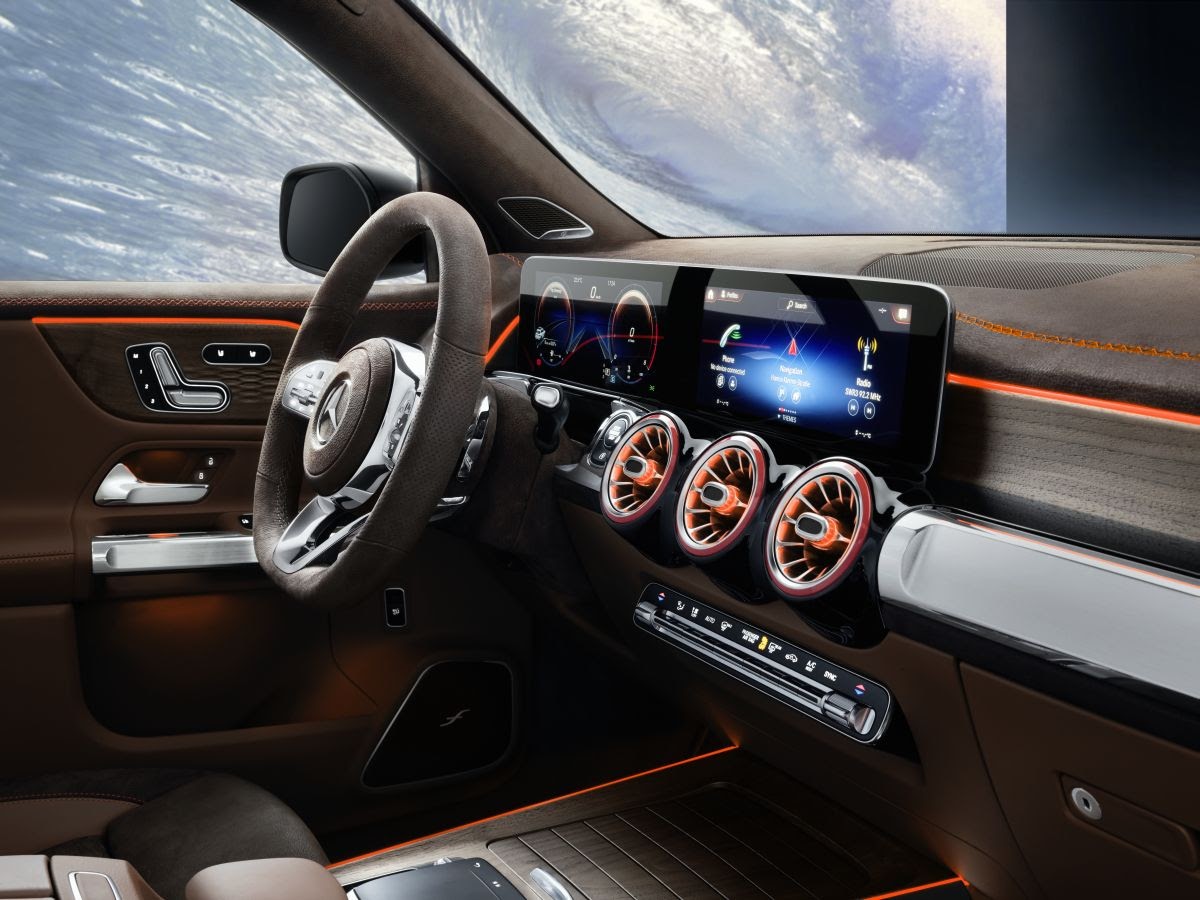 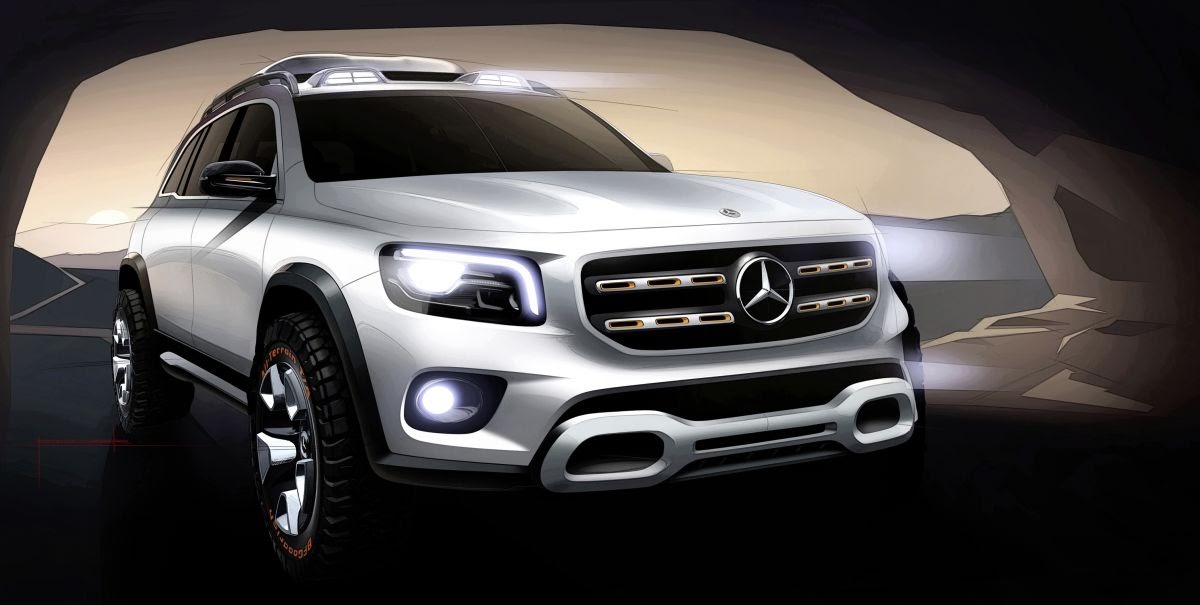 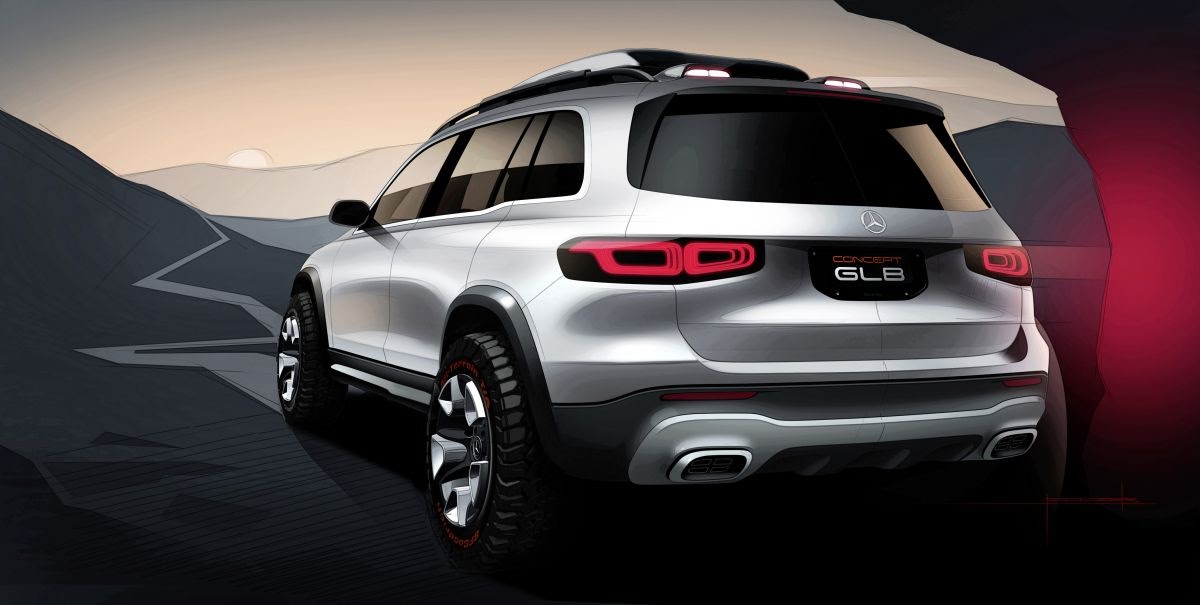 Mercedes-Benz Concept GLB: This is how spacious and robust a compact car can be

Stuttgart/Shanghai. With the Concept GLB at Auto Shanghai (18 to 25 April 2019), Mercedes-Benz shows what SUV ideas on the company's compact car platform might also be realised alongside the GLA as a sporty all-rounder. While the latter promises progressive driving enjoyment with its coupé-like lines, the Concept GLB places the emphasis on spaciousness and robustness. The concept car (length/width/height: 4634/1890/1900[1] millimetres) has space for up to seven occupants thanks to its long wheelbase (2829 millimetres). A number of sturdy features signal that the Concept GLB feels right at home on rough farm tracks.

"We asked ourselves whether there is still space between the GLA and GLC in our successful SUV range. The Concept GLB is the answer to this question. With it we are demonstrating the creative ideas we have for this segment, too", says Britta Seeger, Member of the Board of Management of Daimler AG, responsible for Mercedes-Benz Cars Sales. "The Concept GLB is a durable and practical SUV with nonetheless compact dimensions. Whether it is a generous, seven-seater family vehicle or a versatile leisure time companion: we are certain that this concept will be of great interest to our customers." Customers highly appreciate the varied SUV portfolio of Mercedes-Benz. To date, more than six million customers worldwide have purchased a Mercedes-Benz SUV. In 2018, with more than 820,000 units sold, the SUVs were the strongest segment for Mercedes-Benz.

The Mercedes-Benz Concept GLB has a distinctive presence in the world of compact SUVs with its muscular proportions. The clear, surface-accentuated contours with reduced lines and precise joints convey effortless superiority and modernity. The upright front section with its striking MULTIBEAM LED headlamps is clear evidence of off-road genes, as are the short overhangs at the front and rear. The long wheelbase and the functional greenhouse are the decisive factors providing generous spaciousness for up to seven occupants.

The muscular and sensuously contoured vehicle shoulder dominates the side view, an effect reinforced by the rising waistline. The contiguous doors improve ease of access and keep the door apertures free of soiling. All-round protective claddings divide the overall proportions and emphasise the vehicle's off-road character.

The harmonious colour concept has exterior paintwork in designo cashmere white magno with high-gloss black mounted parts (e.g. the claddings or integrated roof box) as a contrast, plus discreet orange highlights in the radiator grille and as lettering on the outside mirror housings.

The chrome underguard at the front with integral air inlets in a stainless steel look emphasises the off-road qualities. The rear underguard echoes this theme, creating a balanced overall picture.

With a series of distinctive extra elements the concept vehicle exhibits a particularly robust character. At the front and rear, two shrouds emerge from the roof frame and accommodate LED spotlights acting as ambient lighting and orientation aids when driving off-road.

The black roof rails end in a curve at the front and rear. A roof box is mounted on the rear area. The rough-treaded off-road tyres are on robust 17-inch wheels in a bicolour design.

In design terms the interior of the Concept GLB reveals its membership of the new Mercedes-Benz compact car family, but as a showcar and SUV it has a special leather features and special trim elements. And for the first time in a compact model by Mercedes-Benz, a third seat row with two additional single seats that can be recessed flush into the load compartment floor to increase load capacity. These seats are far more than emergency seats, and offer comfortable seating for two medium-sized occupants.

The backrest of the middle seat row is 40:20:40 split-folding, and can be folded down to create a level load surface. The seat surfaces have a 40:60 division. The second seat row is fore-and-aft adjustable by 140 mm – by 90 mm to the front to increase luggage space or legroom for occupants right in the rear, and by 50 mm to the rear if particularly generous legroom is required in a five-seat configuration. Eight-stage seat backrest inclination adjustment in the second seat row also facilitates adaptation according to the current space or comfort requirements.

The seats, fittings and door panels are partially lined in nappa and nubuk leather, the predominant colour tone being "chestnut brown". Echoing the exterior highlights, there are orange trim strips and seams in just a few places. The centre sections of the front seats have two parallel rows of perforations in their woven nubuk leather covers, revealing the orange-coloured fabric sub-layer. These extend from the front edge of the seat cushion to the upper edge of the integrated head restraint.

The wood trim elements on the dashboard and centre console are of open-pored walnut. The walnut panels have a chiselled honeycomb pattern that fades out towards the edges. The pedals in the footwell feature decorative inserts in the same material within a high-gloss metal surround, with an identical honeycomb pattern.

The basic architecture of the dashboard corresponds to that of the B-Class, with a widescreen cockpit facing the driver and the functions and displays controlled via the Mercedes-Benz User Experience – MBUX. New features are the off-road-type tubular elements in milled aluminium which round off the dashboard at the lower end. These give the dashboard support an impression of robustness, power and a certain fun factor. Below the three round centre nozzles is the air conditioning control panel with an intentionally analogue look, whose buttons create the impression that they have been milled from a solid aluminium cylinder.

The robust character of the interior continues in the centre console. Aluminium tubular elements with a brushed structure in a grab-handle look lend solidity to the design of the components and controls. Along the doors, the SUV character is underlined by the horizontal grab handle that forms a robust part of the door panel structure as a machined aluminium tube.

The Concept GLB is powered by the M 260 four-cylinder petrol engine combined with an 8G-DCT dual clutch transmission, with a maximum output of 165 kW/224 hp and peak torque of 350 Nm. The engine block of diecast aluminium with cast iron cylinder liners has CONICSHAPE® technology, which is also known in-house as "trumpet-honing". To further minimise piston friction and lower fuel consumption, the cylinder bore is widened at the lower end of the cylinder liners. The resulting, conical shape resembles the mouth of a trumpet.

An innovative low-friction oil and optimised piston rings also reduce friction losses. To take account of the higher specific output, the pistons themselves feature cooling ducts. This also ensures more efficient combustion. The balance shafts for smooth engine-running are located in the lower section of the crankcase. To enhance comfort even further, there is a centrifugal pendulum damper in the powertrain.

All-wheel drive as a matter of course: 4MATIC with three selectable characteristics maps

The Concept GLB is equipped with the permanent all-wheel system 4MATIC, with fully-variable torque distribution. This sporty all-wheel drive configuration allows the driver to use the DYNAMIC SELECT switch to influence the characteristics of 4MATIC. Three characteristic maps are available to control the all-wheel drive clutch, though the system responds flexibly to the current driving situation in any mode. In regular driving operation, the drive programme "Eco/Comfort" is based on an 80:20 distribution (front axle:rear axle), while in "Sport" it is 70:30. In off-road mode the all-wheel drive clutch acts as an inter-axle differential lock, with the basic distribution a balanced 50:50.

4MATIC components include the power take-off to the rear axle, which is integrated into the automated dual clutch transmission, and the rear axle differential with an integrated multiplate clutch. This is electro-mechanically operated. Via a crown wheel and a ball ramp, an electric motor exerts an axial force on the clutch pack to open or close the plates. The rear axle differential compensates the different paths/rotational speeds of the rear wheels. The advantages of this control system are above all non-rpm-dependent operation across the entire actuation range, pilot control of the clutch while still stationary and higher efficiency thanks to the ball ramp concept.

A look back at Shanghai 2013: world premiere of the Concept GLA

This is not the first time a compact SUV concept has celebrated its world premiere at the Auto Shanghai show: On 18 April 2013 the Mercedes-Benz Concept GLA drew public attention. As a sporty, coupé-like evolution of this vehicle class, the showcar pointed a new way in the compact SUV segment. It combined a sporty spirit with the all-round qualities of a robust recreational companion.

The multitalented GLA became orderable from the end of November 2013, and deliveries began in March 2014. Since then the GLA has become a major contributor to the success story of the compact Mercedes-Benz models. In 2018 over 609,000 customers worldwide took delivery of their new A or B-Class, their CLA, CLA Shooting Brake or GLA. This means that in 2018, one in four cars sold by Mercedes-Benz was a compact model.