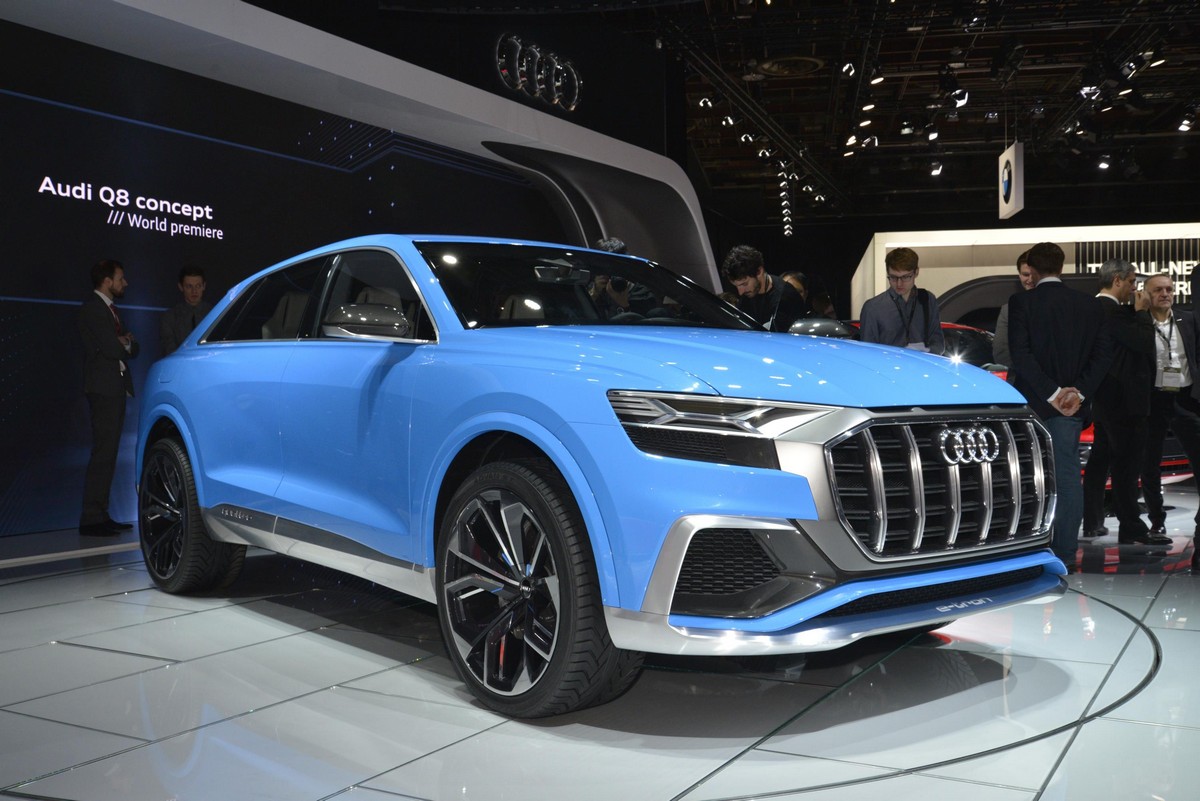 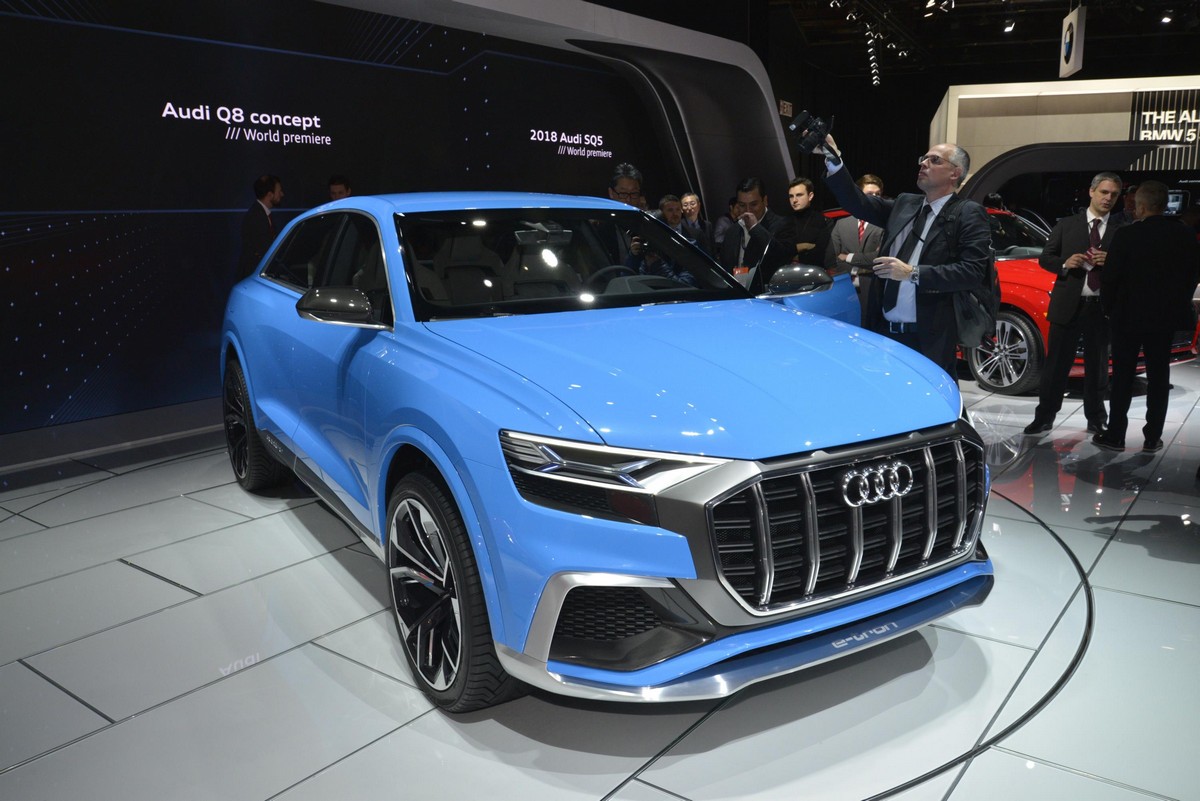 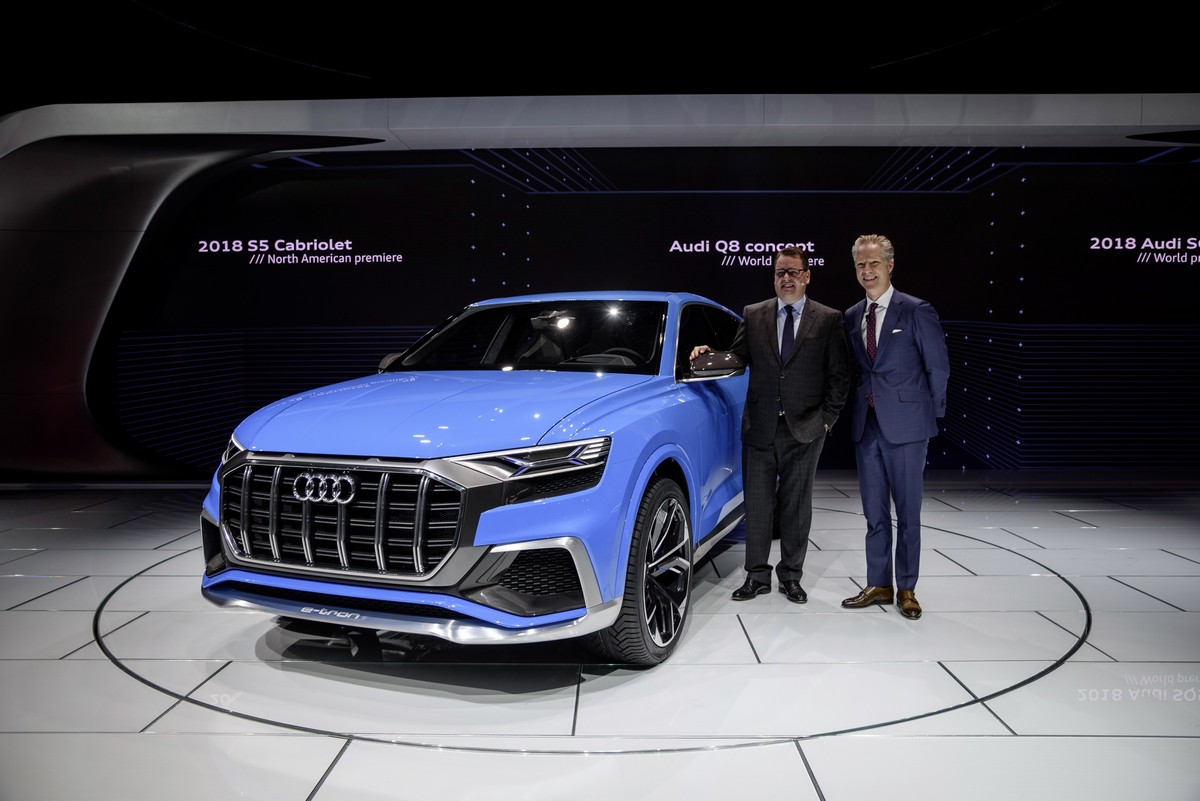 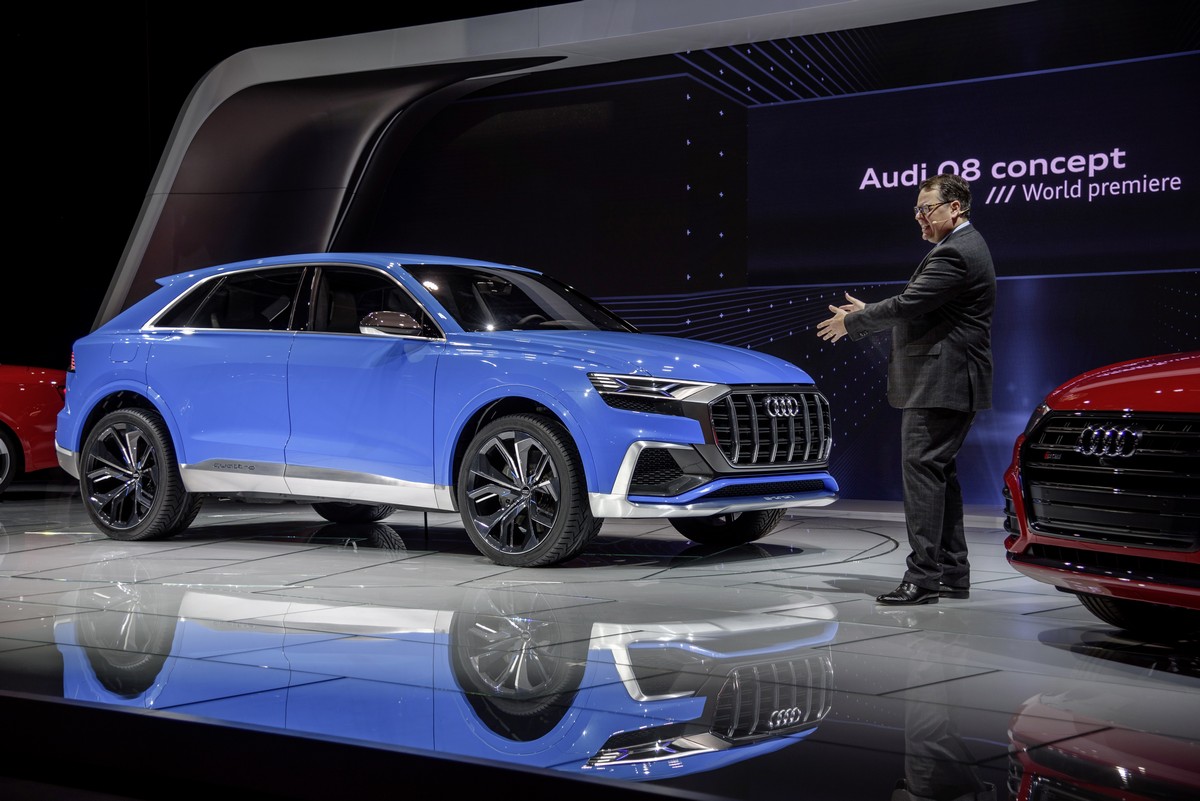 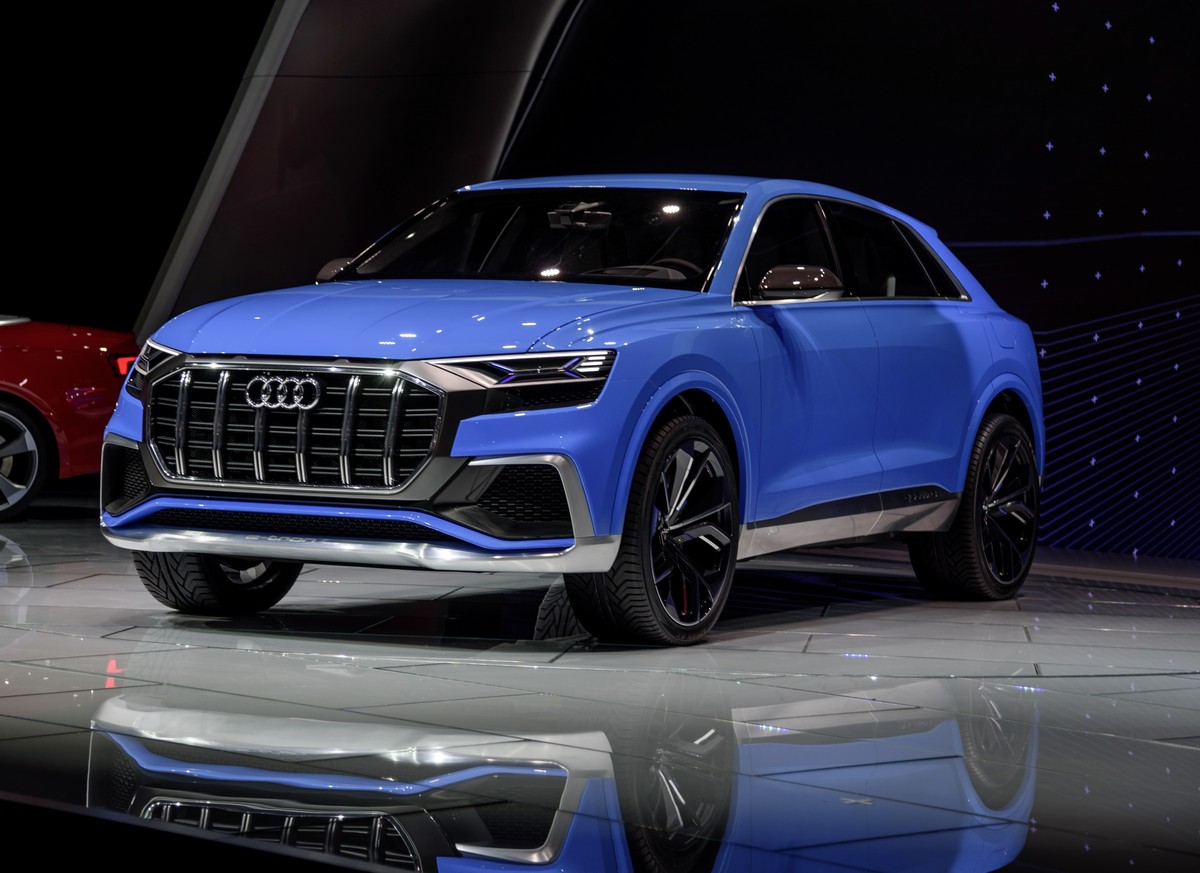 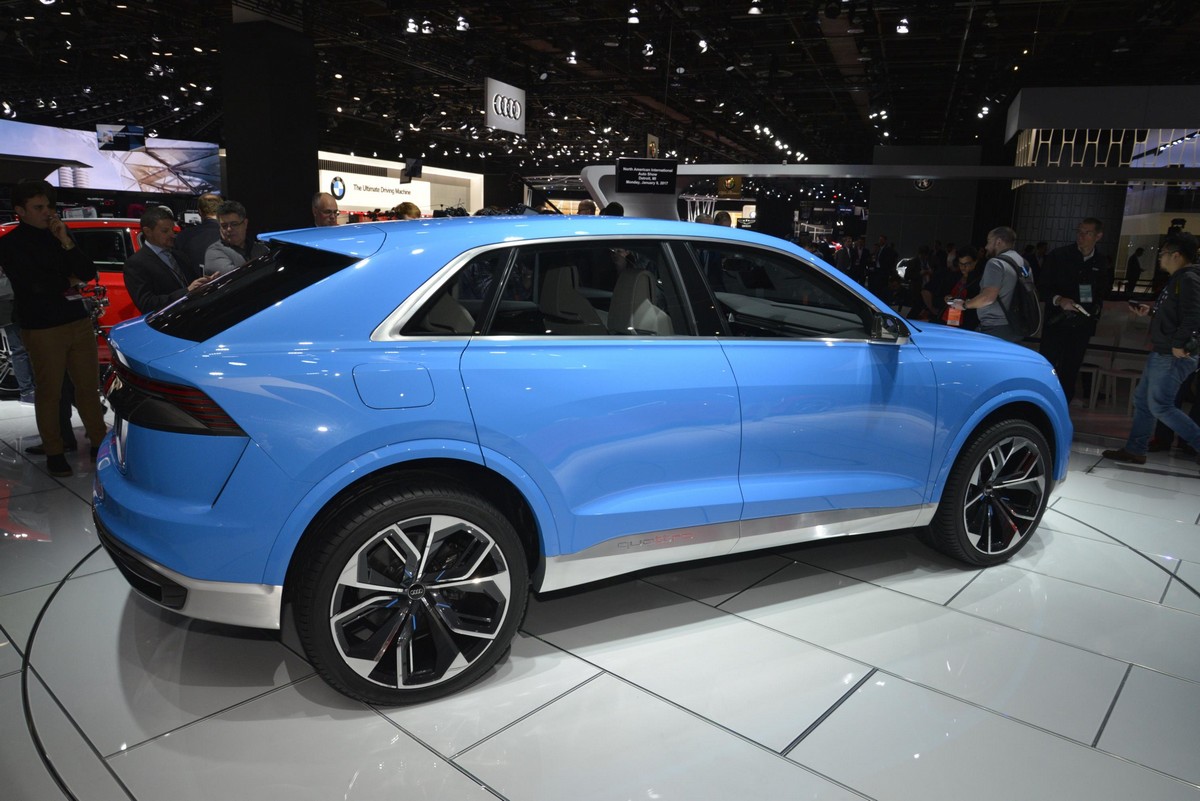 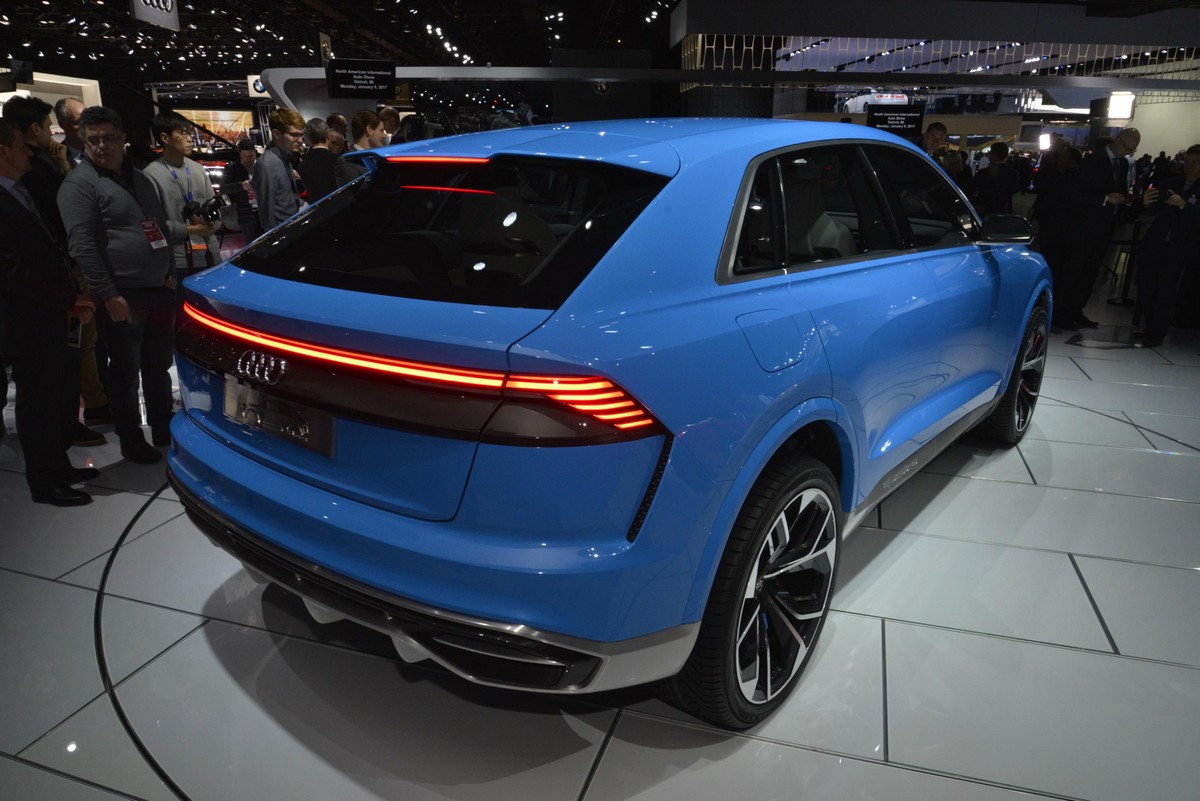 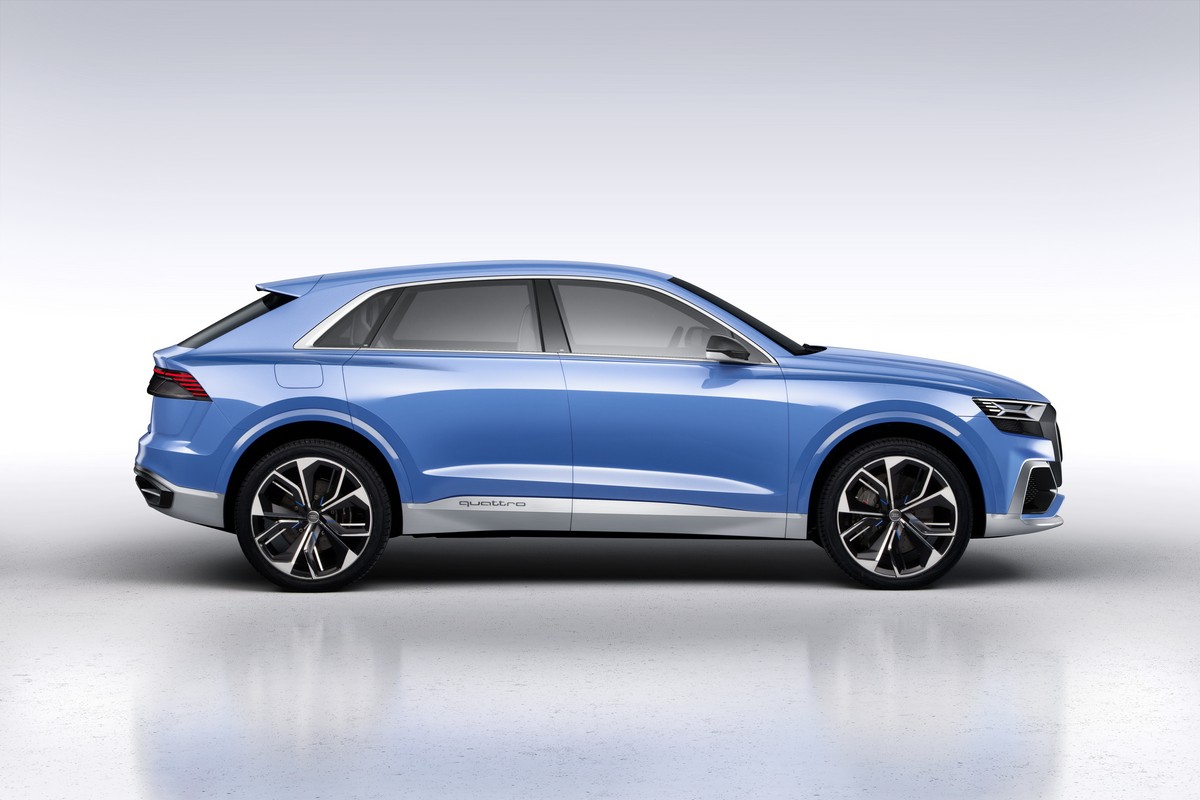 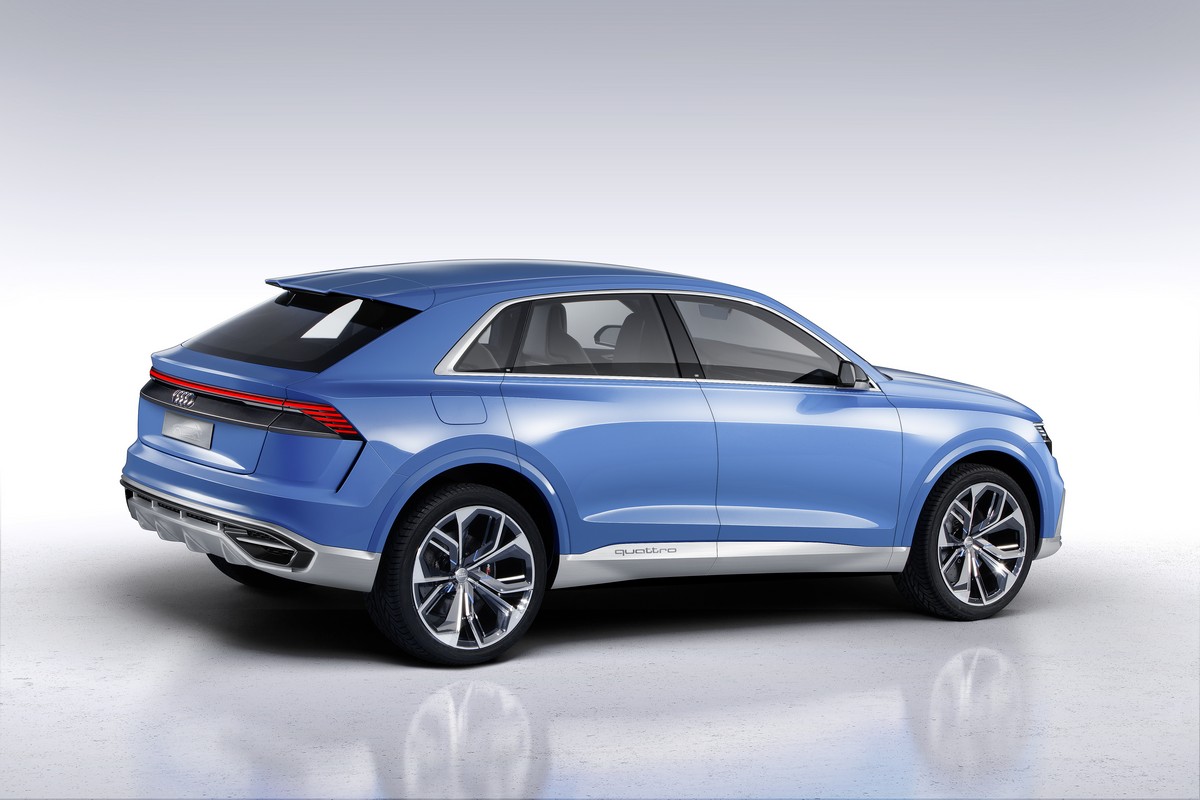 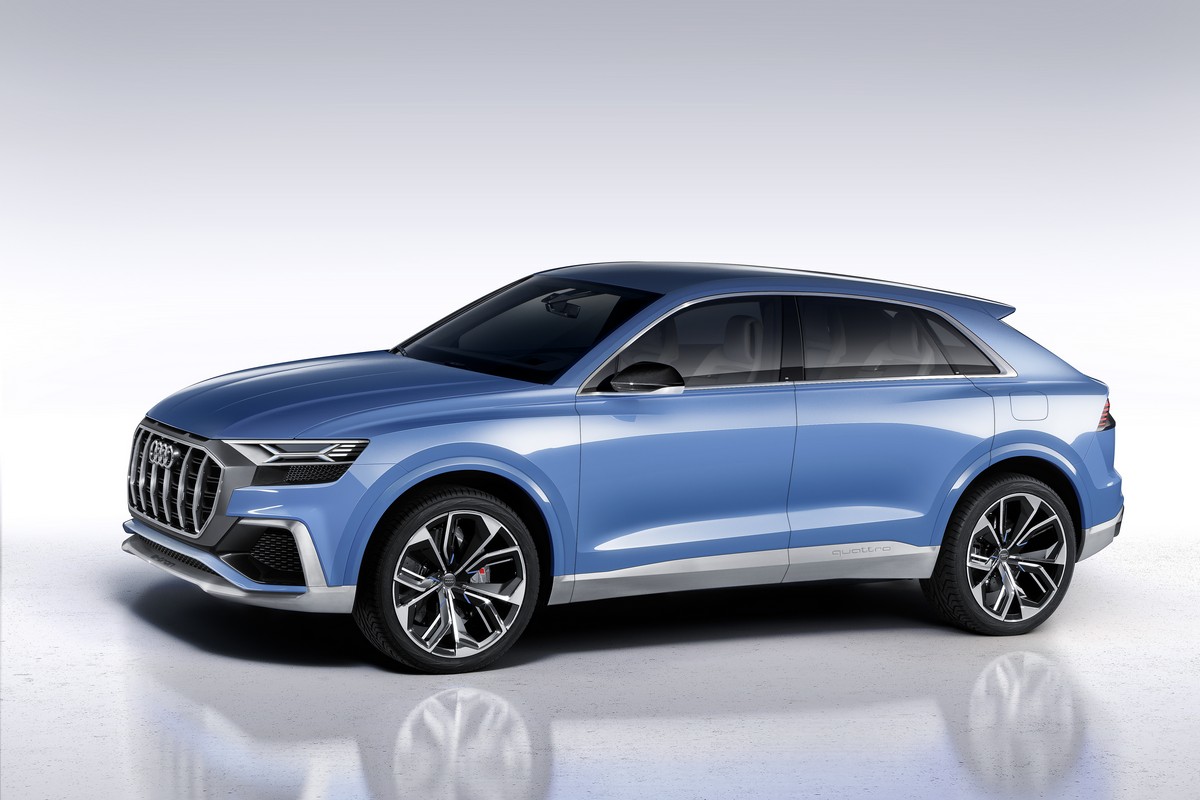 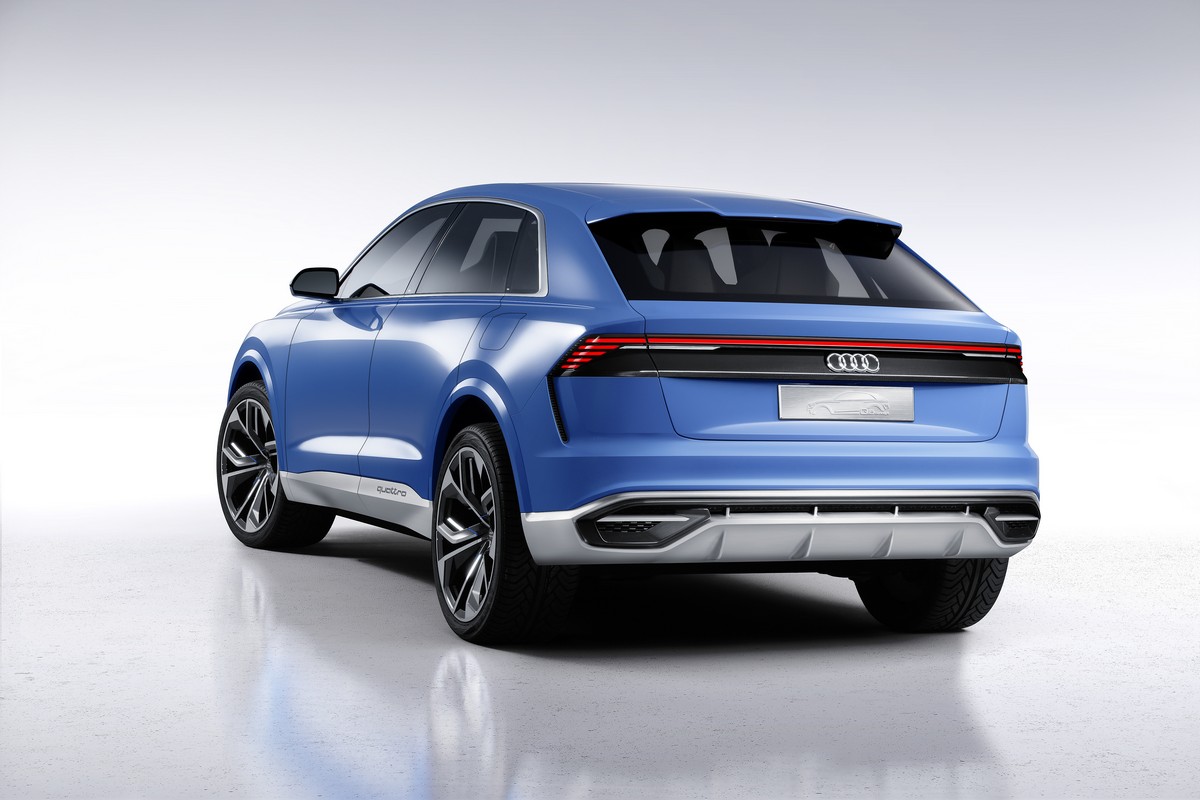 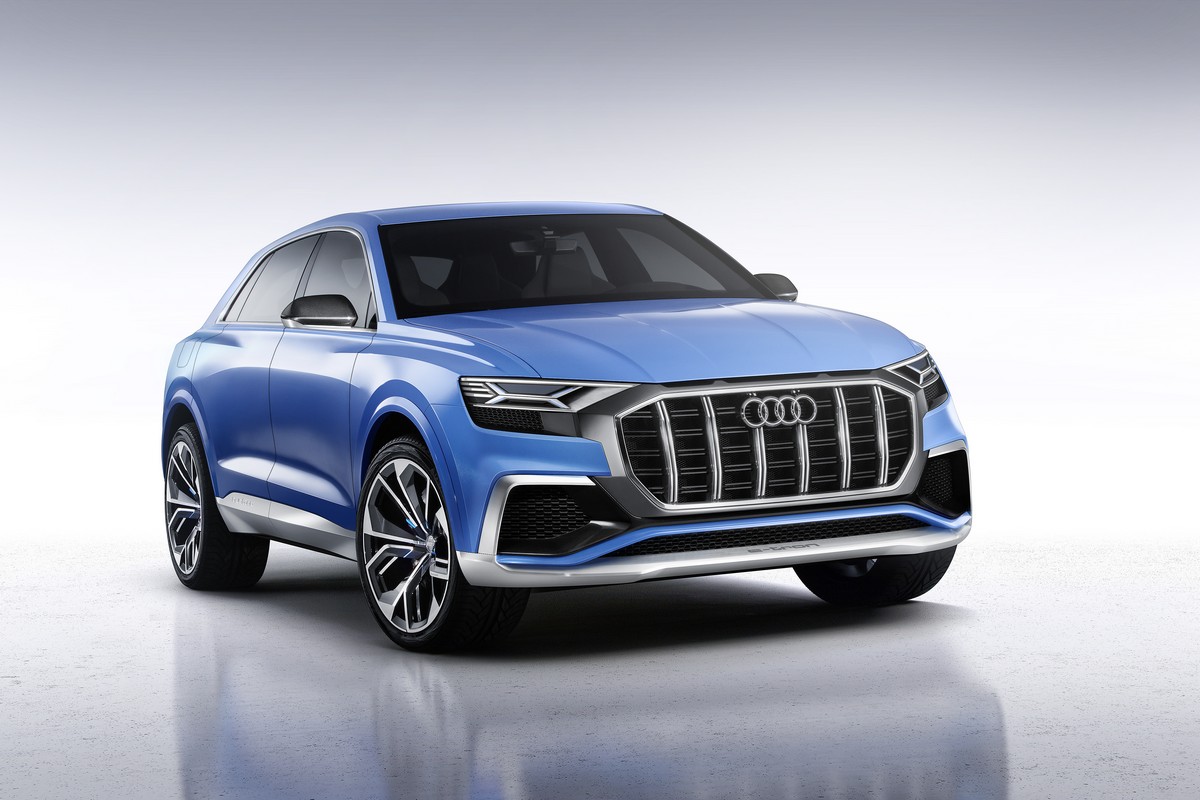 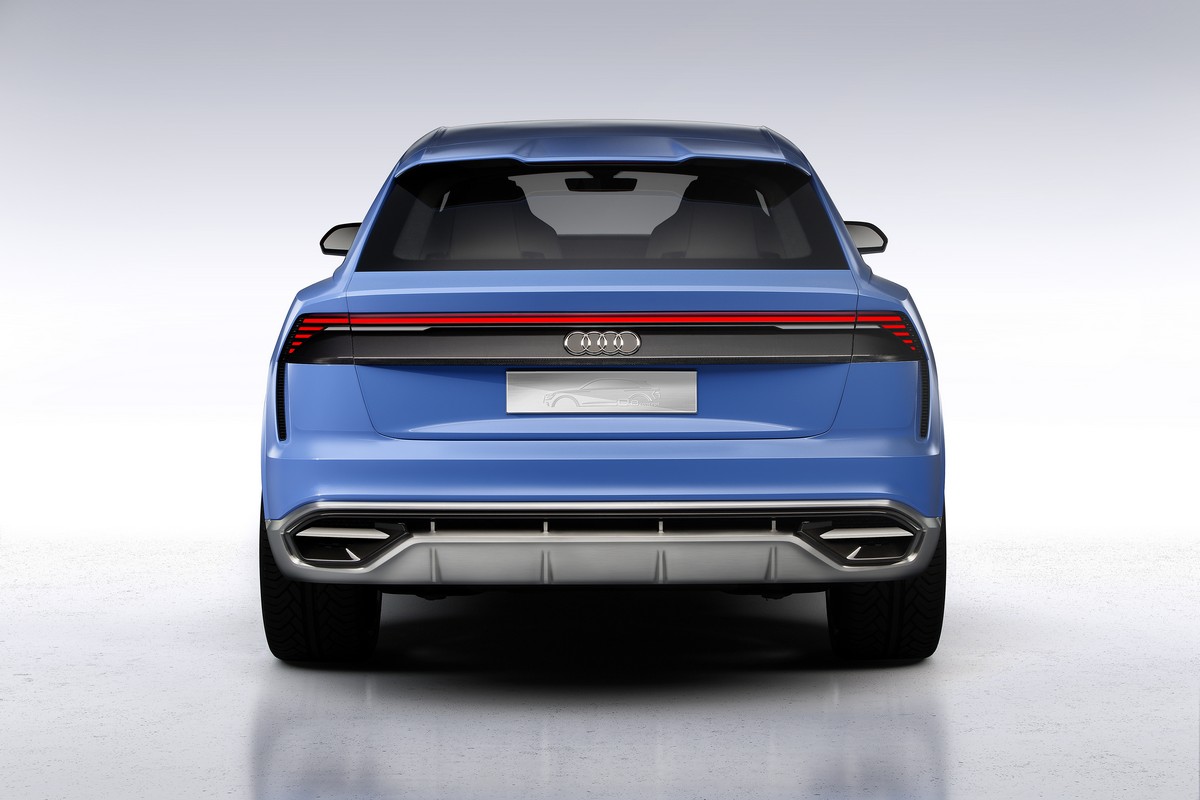 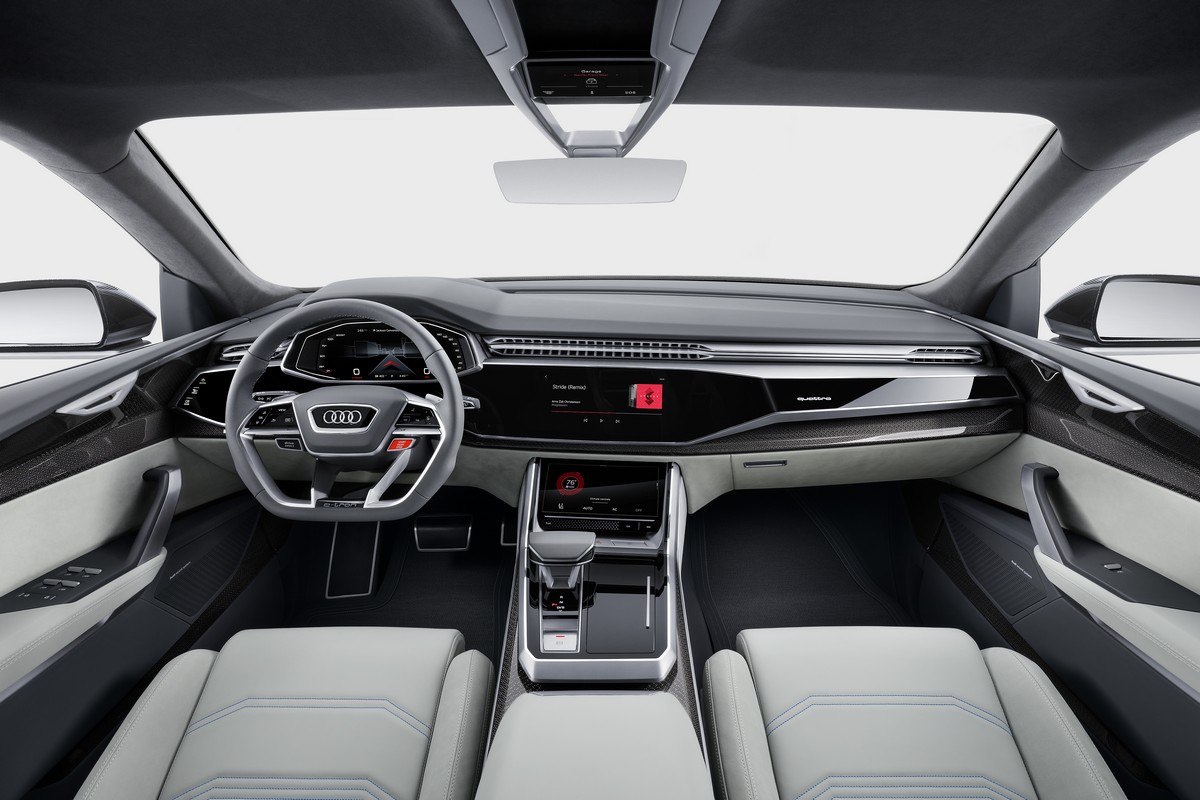 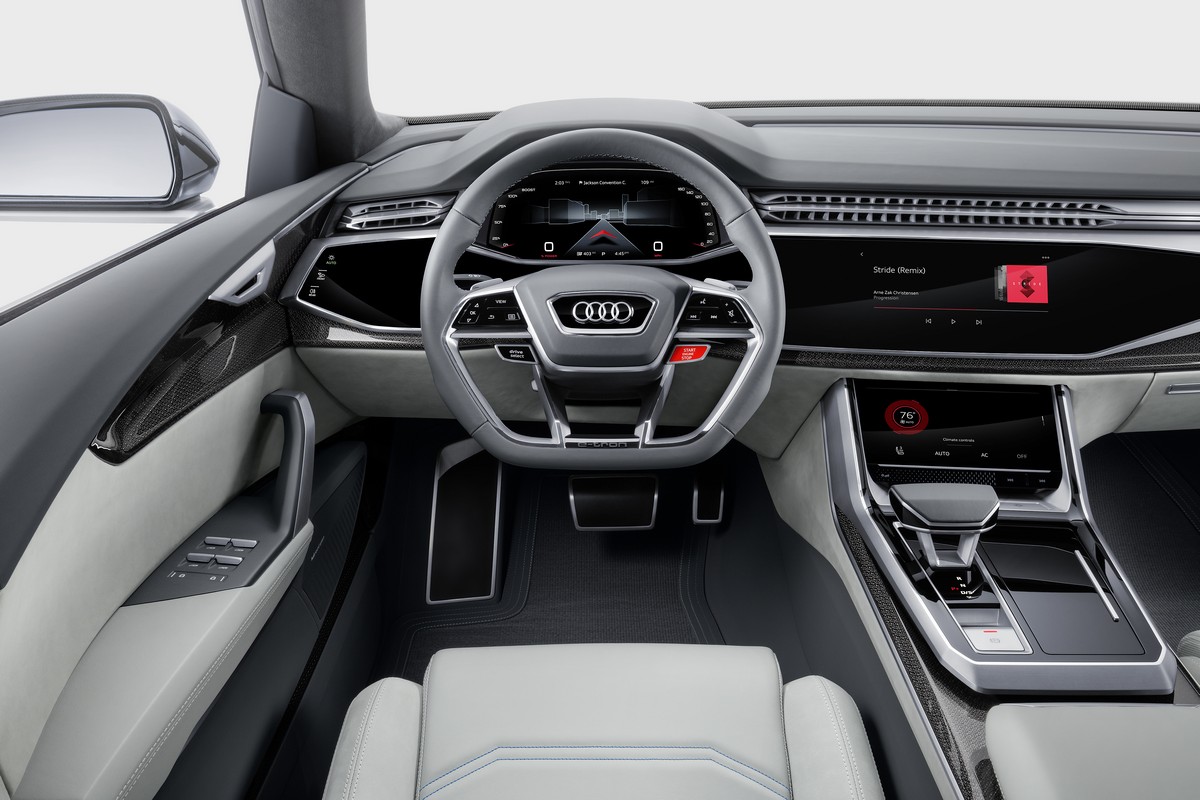 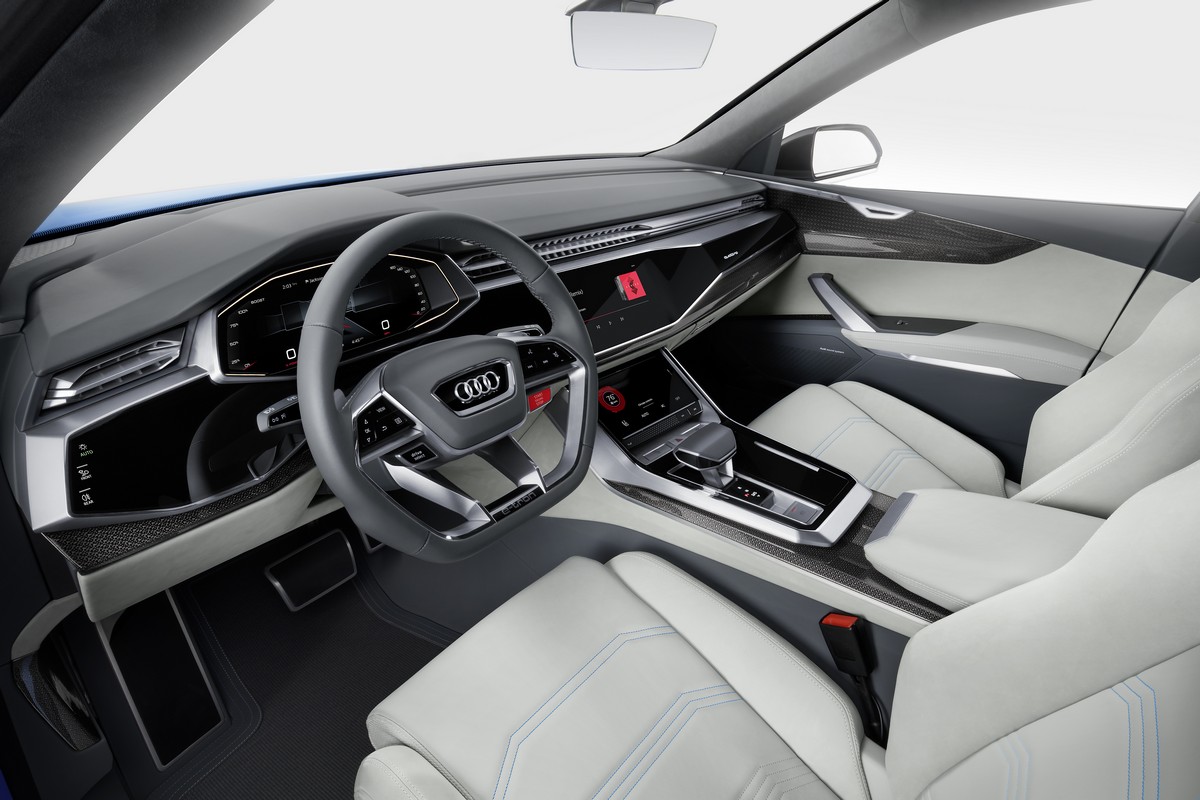 - Production model based on concept to launch in 2018

Dynamic, highly efficient and extremely comfortable: Audi presents the Audi Q8 concept at the North American International Auto Show (NAIAS) 2017. With this model the premium manufacturer is tapping into a new segment for the full-size class – an elegant alternative to the robust presence of a classic sport utility vehicle. The Q8 concept stands for maximum prestige. It combines the spaciousness typical of an SUV with the emotional lines of a coupe. Propulsion is provided by a powerful, yet highly efficient plug-in hybrid with 330 kW of system output and 700 Nm (516.3 lb-ft) of torque. The concept car is the basis for a production model that Audi will launch on the market in 2018.

At 5.02 meters (16.5 ft) long, the Audi Q8 concept is an impressive presence in the full-size class. Thanks to a wheelbase of three meters (9.8 ft), the show car offers plenty of space for passengers and luggage. Despite the sloping, coupe-like roofline, even the rear-seat passengers enjoy ample head and shoulder room. The control concept uses large touchscreens in the cockpit and is rounded out by an expanded version of the Audi virtual cockpit and a contact-analogue head-up display. The latter uses intelligent augmented reality technology that merges the real and the virtual worlds.

“The Q8 concept is an Audi in peak form. It demonstrates the strengths of our brand in both technology and design while providing a glimpse at a future full-size, production SUV,” said Dietmar Voggenreiter, Member of the Board of Management for Sales and Marketing at AUDI AG. “With its next-generation display and control solutions, we are enabling customers to experience connectivity in a whole new way.”

The front view of the 2.04-meter-wide (6.7 ft) Audi Q8 concept is already impressive. The distinguishing feature here is the octagonal Singleframe with honeycomb insert. It is sculpted and significantly wider than in today’s Audi production models. Six upright double bars structure the radiator grille while simultaneously emphasizing its height. A mask painted in a contrasting color frames the grille. The outer air inlets have a deep and dynamic appearance like the intakes of a turbine. A distinctive aluminum blade forms the bottom edge of the bumper.

The flat, wedge-shaped headlights of the Audi Q8 concept are integrated progressively into the exterior and connected from a design perspective to the surrounding air inlets. The individual lighting units have glass covers, but the headlights as a whole are open. This creates the impression that they are free in space. The aluminum housing for the headlights carries over the sculpture of the Singleframe. The clear geometry gives the Audi Q8 concept a determined look. An x-shaped, blue laser light signature highlights the digital Matrix laser technology used for the low and high beams. Broken down into more than one million pixels, their light can illuminate the road in high resolution and with precise control. Located below the edge of the engine hood is a narrow LED light guide that emits the light for the dynamic turn signals and the daytime running lights. It wraps around the outside of the headlights, where its ribs create an innovative e-tron signature. All lighting functions are dynamic.

Athletic and powerful: the side view

The silouhette of the Audi technology study also evokes tautness. The doors do not have window frames, thus contributing to the flat roofline. The Audi Q8 concept is 1.70 meters (5.6 ft) tall. All lines on the body climb upward dynamically toward the rear – the bottom edge of the side window, the shoulders, the dynamic line and the sill lines. The surfaces of the fenders, doors and side panels are athletically curved. The lower section of the doors form a deep fillet. Other design features are the quattro logo milled below the rear doors and also the exterior mirrors with their multifaceted edges. The doors are opened via touch sensors. As soon as the door detects hand contact, it opens easily and swings to a defined opening angle.

The extremely flat and very wide C-pillar is reminiscent of the Audi Ur-quattro from the 1980s, as are the strongly flared shoulders over the wheels. This places the concept car in a logical line with the show cars of the Audi Prologue series. The balanced proportions of the Audi Q8 concept emphasize the front and rear wheels equally – that too is typical quattro. The strongly accentuated wheel arches feature a double design. The sill region of the doors shines in

Flat and compact: the rear

A long roof edge spoiler shades the extremely flat rear window of the Audi concept car. A double spoiler lip below the window forms a distinctive contour on the power luggage compartment hatch. The strip of lights extending over the entire width of the rear end is part of a distinctive e-tron light signature. It serves as both the tail and brake light as well as the dynamic turn signals. The four outer lighting elements are set in aluminum blades and reflect the semantics of the headlights. The individual elements of the tail lights are also open, and all lighting functions are dynamic.

The license plate of the Audi Q8 concept is located on a black trim strip between the lights – a typical feature of the Audi Ur-quattro. The diffuser is made of aluminum; its clasp of high-gloss Carbon Atlas. This combination of materials is also used around the headlights to demonstrate sportiness.

Luxury lounge for four: the interior

The interior of the Audi Q8 concept offers opulent spaciousness for four persons and their large suitcases. The luggage compartment has a capacity of 630 liters (22.2 cu ft). Widely stretched lines lend the cockpit a sporty as well as elegant ambiance. Virtually floating above the center tunnel is a console for the shift-by-wire lever, with which the driver controls the eight-speed tiptronic transmission purely electronically. The console’s appearance resembles the stern of a sailing yacht.

The wrap-around begins in the front doors. This large, horizontal arc runs along the lower edge of the windshield and frames the driver’s and front passenger’s seats without hemming in the occupants. The sport seats as well as the two individual seats in the rear are made up of segments that appear to be separate geometric bodies, from the pronounced side bolsters to the head restraints. A horizontal aluminum clasp divides the backrests at the height of the window shoulder line.

The instrument panel with its distinctly horizontal character descends in steps toward the interior. The central control and display surfaces are integrated into the so-called “black panel” – a glossy black strip framed by an aluminum clasp. When switched off, the monitor is invisibly embedded in the surface and the lines flow harmoniously. When the display is in operation, it assimilates perfectly into the design line. In the front passenger area, the black panel encircles a graphical quattro badge. The arrow-shaped inlays in the doors pick up the expressive design. Filigree aluminum bars integrated into them serve as door openers. When dark, LED light guides illuminate the interior with white light.

The colors and materials in the Audi Q8 concept provide for a cool and sporty atmosphere. One highlight is the three-dimensional, engineered grain on the instrument panel, doors and floor. High-gloss carbon applications with a new, abstract fabric structure as well as aluminum strips and frames set accents. Their brushed finish is relatively dark. Brightness increases gradually from the headlining to the center console in graduated shades of gray from steel gray to pastel silver.

The technical materials in the Audi Q8 concept contrast with the soft surfaces. The seats are covered in a combination of Fine Nappa leather and Nubuk leather, both in pastel silver. The upholstery is pulled around the clasp that divides the backrests – the inside becomes the outside at this point. The head restraints are covered with a structured textile of a color similar to that of the leather elements.

The elegant interior architecture of the Audi Q8 concept merges with a groundbreaking control and display concept. Information and commands are passed primarily through touch displays augmented by the Audi virtual cockpit and a contact analogue head-up display. All displays feature a new “digital design” that concentrates systematically on the most important things.

The contact analogue head-up display projects important displays onto the windshield in the driver’s direct field of view, seemingly placing them in the real environment. A navigation arrow, for example, appears in the same position as an actual arrow on the road – an intelligent application of augmented reality. The notifications from the driver assistance systems also merge the virtual and physical worlds.

The Audi virtual cockpit future is even more dynamic thanks to new functions, and with a resolution of 1920 x 720 pixels displays graphics with more detail than ever before. In “auto” display mode, the 12.3-inch TFT display offers generous space for maps, lists and additional information. The top-down map view visualizes the selected route. When zooming in, the current position and surroundings are displayed in 3D. Through the buttons on the steering wheel, the driver can switch to “performance” mode. The needles of the speedometer and powermeter now appear in a foreshortened, three-dimensional display.

All other monitors in the Audi Q8 concept are touch displays. The great strength of this principle is the direct, fast and intuitive operation. Drivers select each function exactly where they see it. Audi was also able to reduce the number of buttons, switches and levers thanks to the touchscreens. The interior now appears even neater and cleaner.

The MMI monitor in center of the dashboard is used to control the infotainment system and for vehicle settings. A display for the climate control system is integrated into the diagonal section of the center console. The driver’s wrist rests comfortably on the low selector lever of the eight-speed tiptronic while using this display. If the sensors in the seat detect a front-seat passenger, the touchscreen displays their climate control settings. This function is not available when the driver is traveling alone. Another touchscreen is reserved for the lighting functions.

The lithium-ion battery located in the rear consists of 104 prismatic cells. With a capacity of 17.9 kWh, it enables an electric range of 60 kilometers (37.3 mi), and the total range with the TFSI engine is up to 1,000 kilometers (621.4 mi). A full charge with 7.2 kW output takes about two and a half hours.

When driving, the hybrid management system controls the operating states of the Audi Q8 concept intelligently and flexibly. The full-size SUV can boost, coast and recuperate as appropriate for the situation. The predictive efficiency assistant, which in production models supports the driver, provides the hybrid management system with highly detailed information about the near surroundings for this purpose. Route data from the navigation system and Audi connect Car-to-X services are also considered.

The driver controls the Audi drive select system via a prismatic satellite button on the flat-bottomed steering wheel, just like the start-stop system. There is a choice of three driving modes: “EV” mode prioritizes electric driving, while in “hybrid” mode the decision regarding the drive type is left largely to the hybrid management system. In “battery hold” mode, it saves the available electric energy for a later time.

In the Audi Q8 concept, the quattro permanent all-wheel drive system delivers the power of the hybrid drive to the road with supreme control. At the cornering limit, it works closely with the wheel-selective torque control. This minimally brakes the inside wheels, which further enhances dynamics and stability.

The technology study also uses high-end production solutions for its wide-track suspension. The adaptive air suspension sport – an air suspension system with controlled damping – allows a wide range from cushioned cruising to firm and tight handling. In addition, it sets the ground clearance in two levels, with 90 millimeters (3.5 in) height difference, to the ideal level in each case. The front and rear suspensions are engineered as lightweight five-link designs.