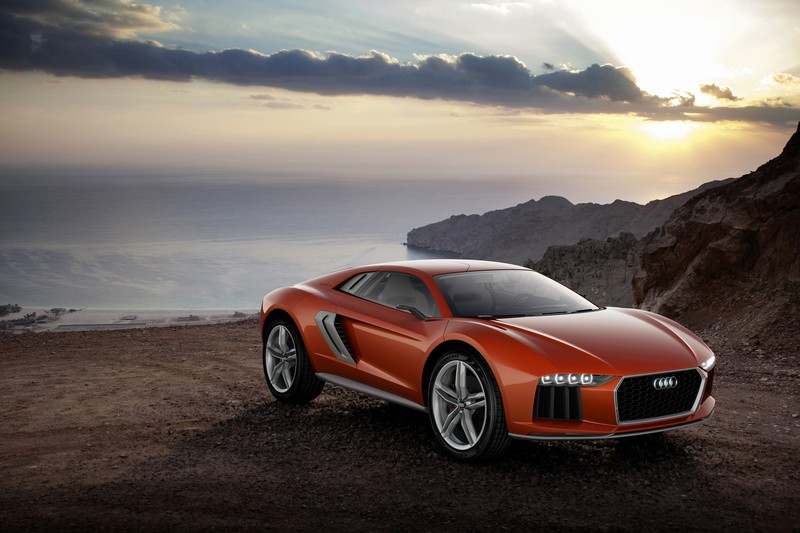 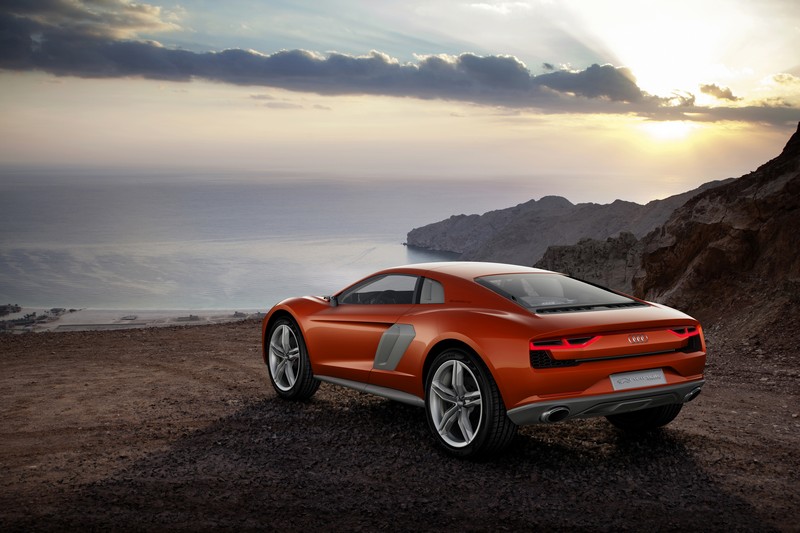 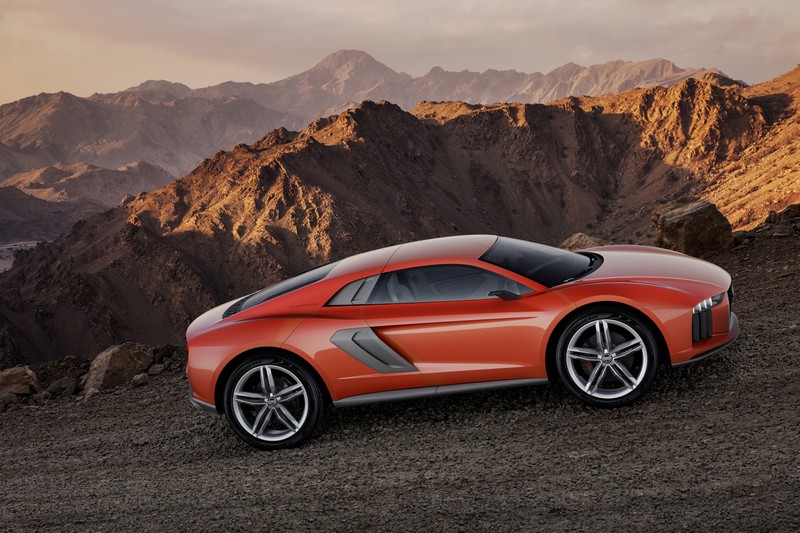 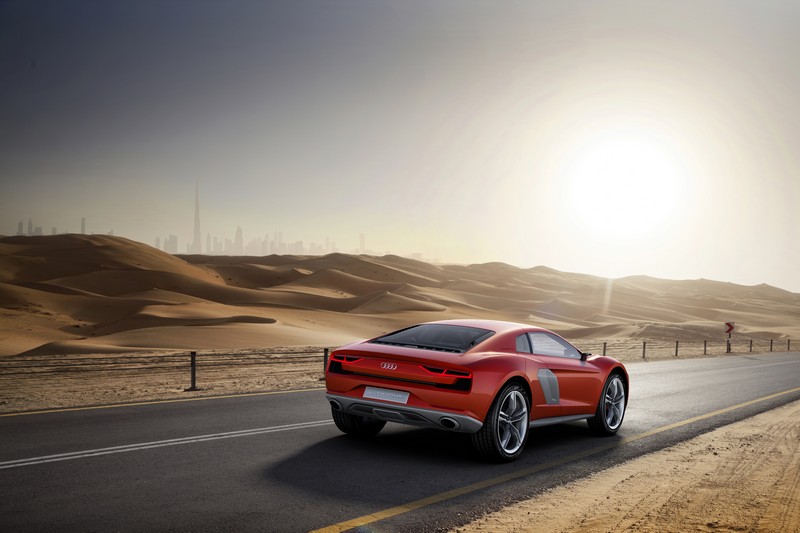 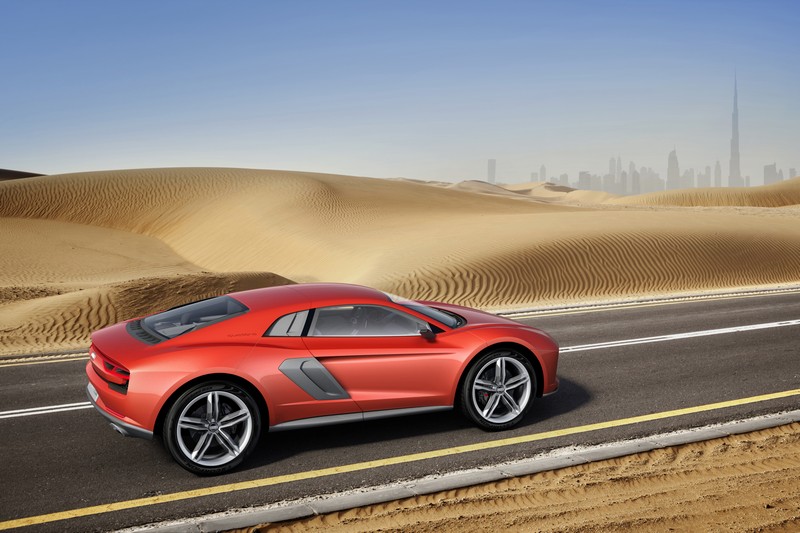 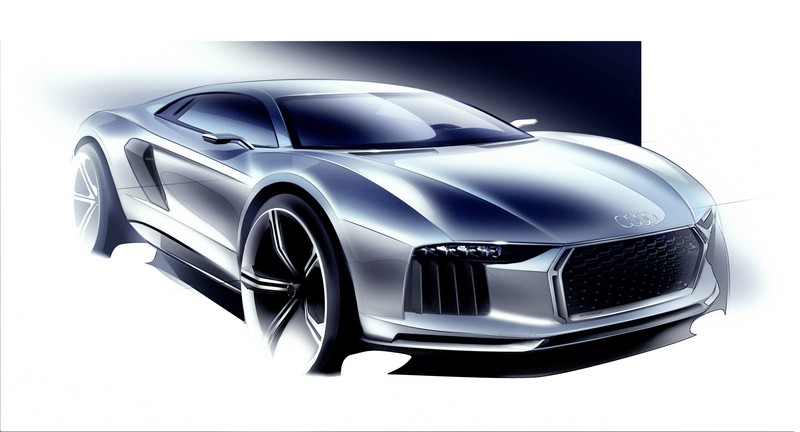 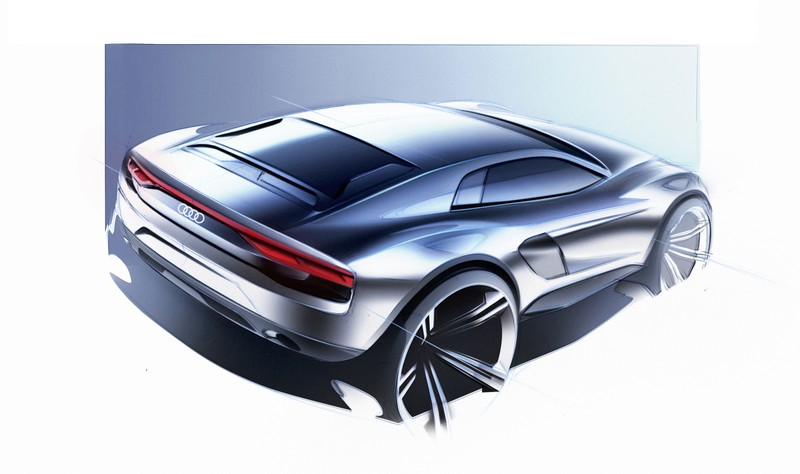 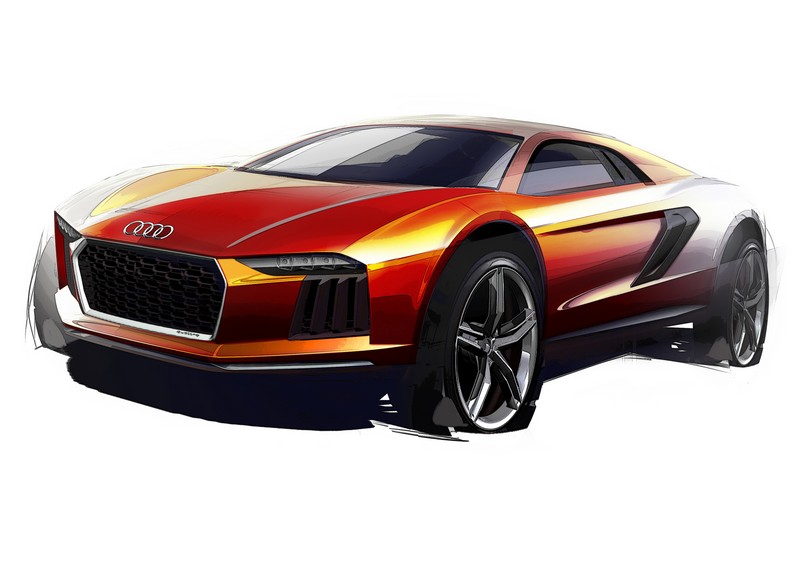 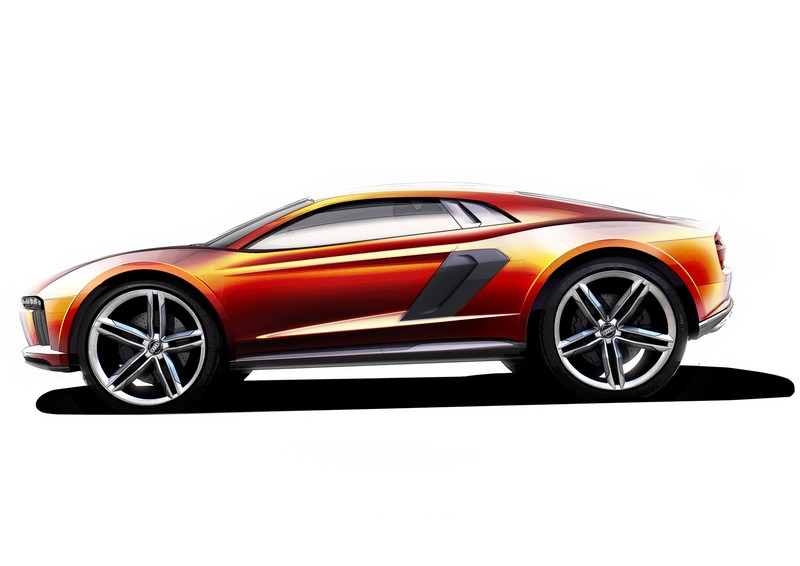 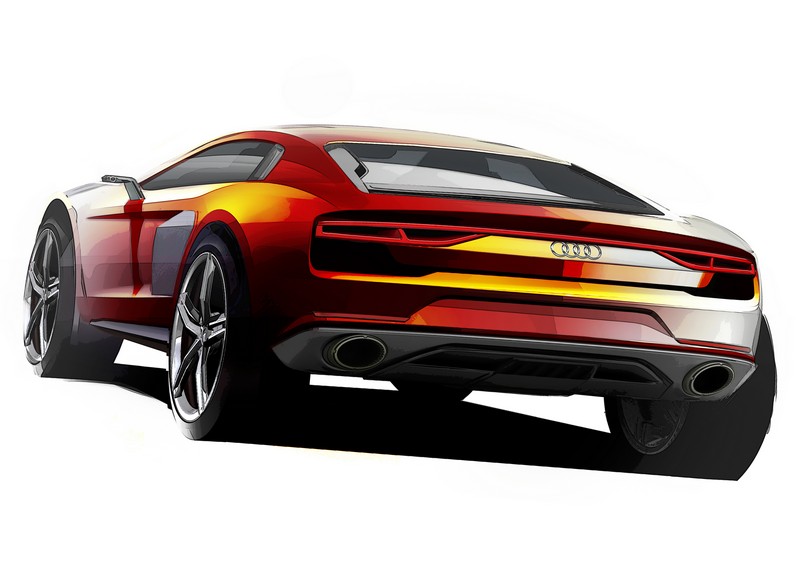 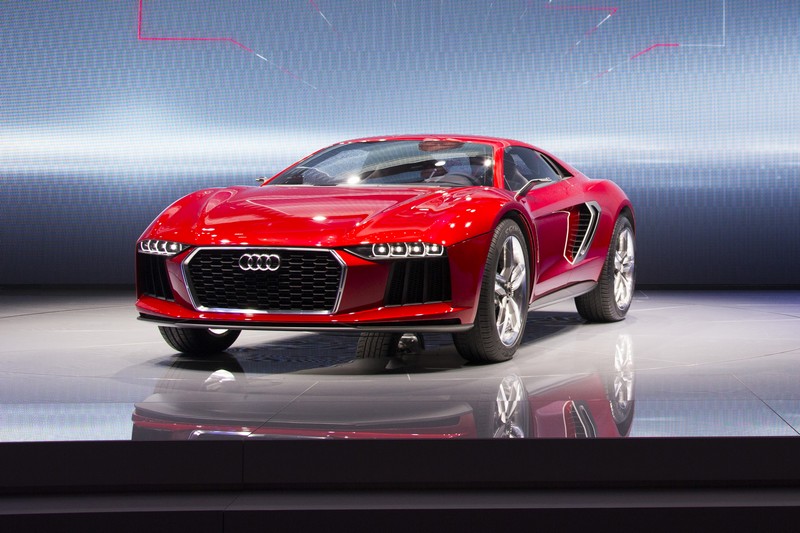 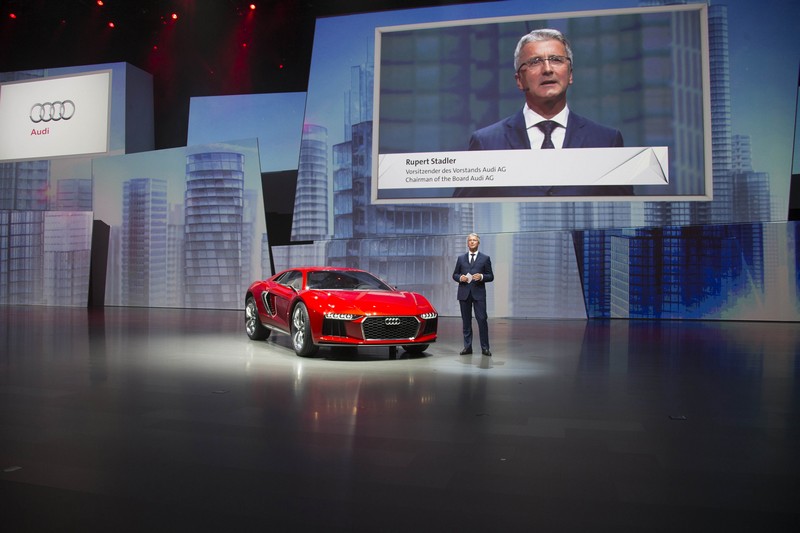 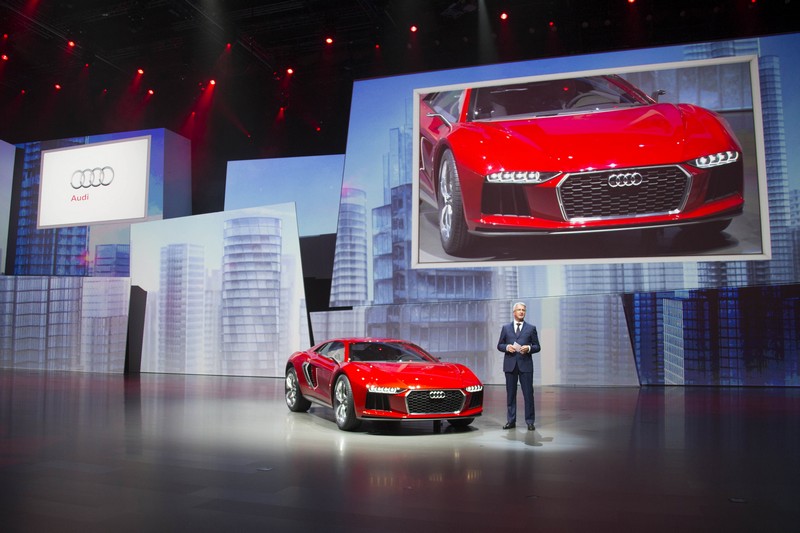 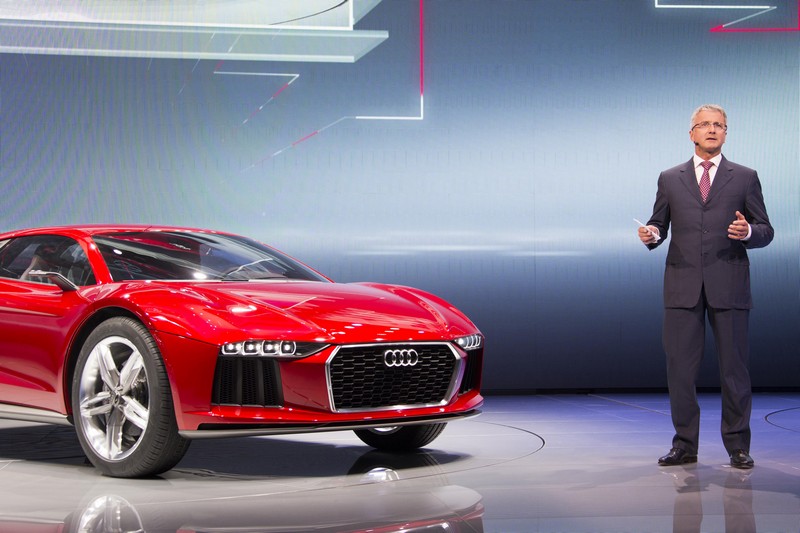 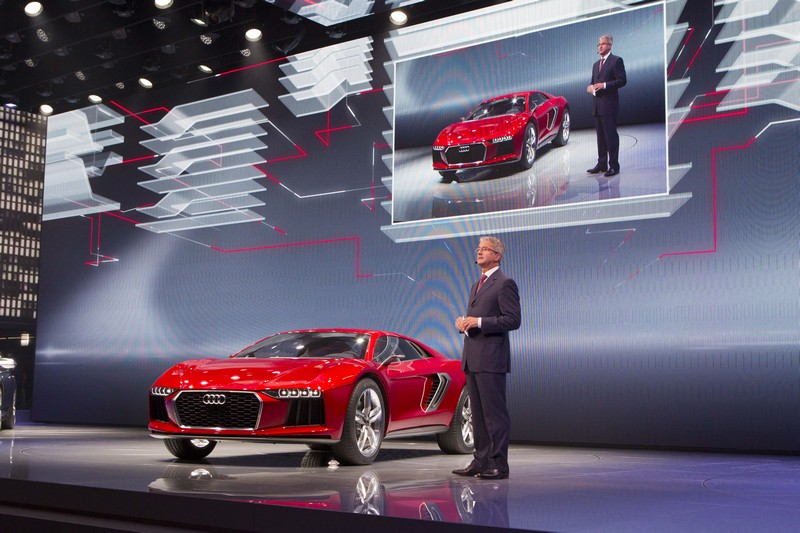 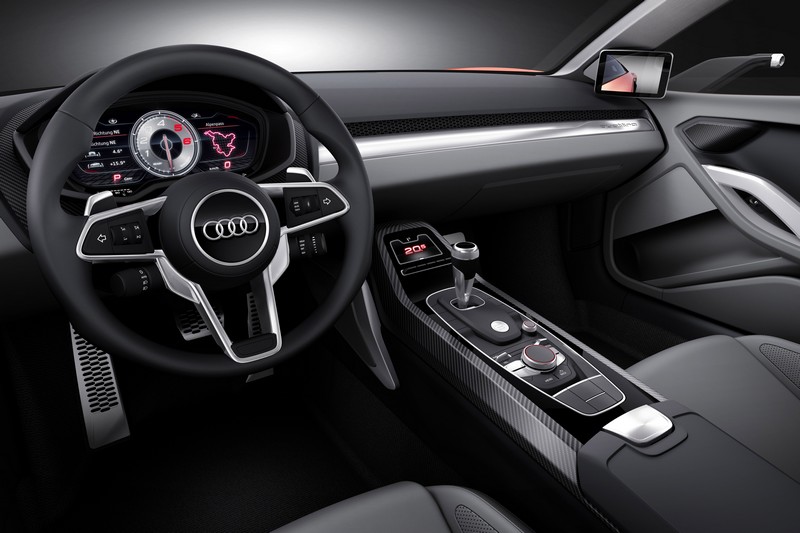 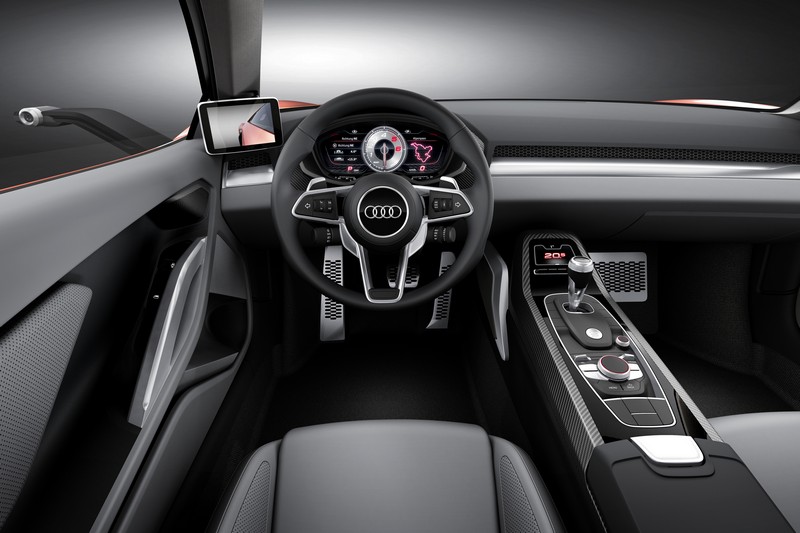 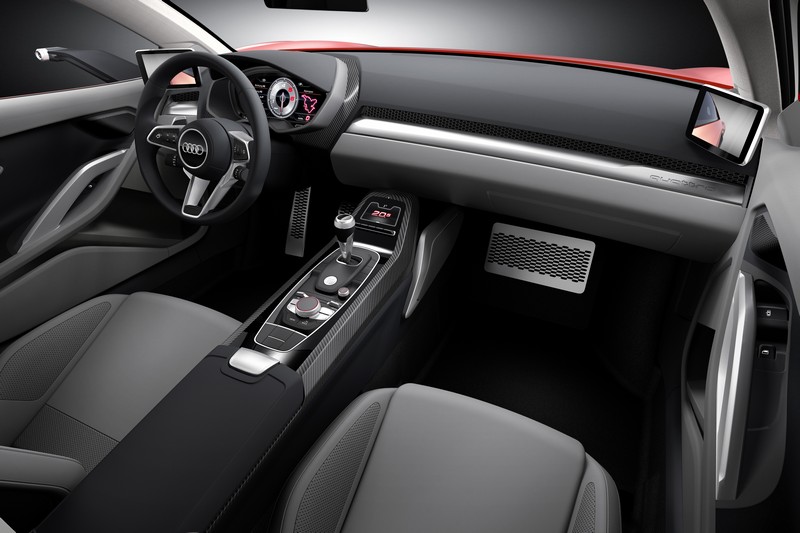 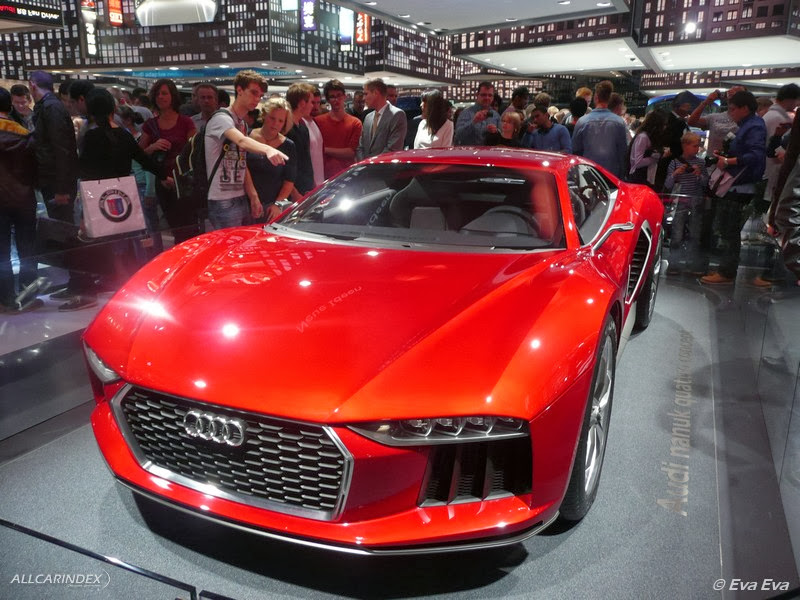 - Integral steering the key to both agility and stability

Sportiness in a new form – Audi is showing the Audi nanuk quattro concept show car at the IAA in Frankfurt am Main. Its crossover concept combines the dynamics of a high-performance sports car with Audi's quattro expertise on the road, on the race track and also off-road. The V10 TDI engine sets benchmarks for power and efficiency.

Audi developed the Audi nanuk quattro concept show car in collaboration with the designers from Italdesign Giugiaro. The result is a sports car for any stage of life and for any surface – equally at home on the race track, the highway or a winding country road as it is off-road in the sand or in the snow. It’s crossover concept combines the dynamics of a mid-engine sports car with the versatility of a sporty recreational vehicle.

The two-seater is powered by a newly developed V10 TDI installed longitudinally in front of the rear axle. The powerful 5.0-liter diesel engine produces over 400 kW (544 hp) and delivers 1,000 Nm (737.56 lb-ft) of torque to the crankshaft from just 1,500 rpm. Its twin-turbo register charging unit is controlled via the Audi valvelift system (AVS). The common rail system operates at an injection pressure of 2,500 bar. A beefed-up seven-speed S tronic located behind the engine transfers the torque to a specially designed quattro drivetrain.

Double wishbones guide the show car's 22-inch wheels, which are shod with 235/50-series tires up front and 295/45 at the rear. The carbon fiber-ceramic brake discs can withstand high temperatures and are extremely abrasion-resistant.

The adaptive air suspension with electronically controlled dampers features the next generation of technology from Audi. The driver can manually adjust the ground clearance of the Audi nanuk quattro concept in three stages: normal, 30 millimeters (1.18 in) lower or 40 millimeters (1.57 in) higher. The system also controls the level of the body itself based on driving speed and the predictive route data supplied by the navigation system. On the highway, for example, the body remains lowered even when the Audi nanuk quattro concept is moving slowly. It is automatically raised when turning onto a gravel road.

Another technological highlight of the show car is the integral steering, which resolves the classic conflict between dynamic handling and stability. The system combines the proven Audi dynamic steering at the front axle, which among other things can intervene at the cornering limit for enhanced stability, with supplemental steering for the rear wheels. Separate actuators activate the two active track rods.

When the driver steers at low to moderate speeds, the rear wheels turn up to nine degrees in the opposite direction of the front wheels. This shortens the wheelbase virtually by around 100 centimeters (39.37 in), reducing the turning circle to roughly 10 meters (32.81 ft). Handling also becomes more agile. The Audi nanuk quattro concept turns in even more eagerly and is essentially neutral in corners.

At higher speeds the system turns the rear wheels by as much as 2.5 degrees in the same direction as the front wheels. This extends the wheelbase virtually by around 140 centimeters (55.12 in) for better stability. On the highway, the show car is firmly seated on the road and masters fast corners and avoidance maneuvers with aplomb.

These are exaggerated, uncompromising and angular. The Audi nanuk quattro concept is a dynamic sculpture on large wheels that opens a new chapter in the Audi design language.

At the front of the show car is a very flat version of a hexagonal single-frame grille. A narrow aluminum frame encircles its insert.

Dynamic daytime running lights accentuate the Audi signature when the car is started and also serve as dynamic turn signals. Particularly distinctive, however, is the switch between the low beams and high beams made possible by the new Audi Matrix LED technology. When driving with the low beams, the show car appears clean and open, but hunkered down and focused when driving with the high beams.

The large air inlets up front have been shifted toward the back. Three upright bars structure their interior. The blade, which forms the lower edge of the bumper, includes airflow slits. The four rings are mounted in the single-frame grille.

The contours of the fenders dominate when theAudi nanuk quattro concept is viewed from the side. The front contour forms a sharp blister edge, a classic Audi design feature. The rear contour extends like a wave over the wheel. The greenhouse is low, and the C-pillars flow smoothly at a gentle angle to the rear of the car. In the bottom section of the flanks, very wide aprons cap the side sills.

The door is sculpted. The upper and lower sections protrude boldly while the center section is slightly recessed. The doors open upward at an angle. Delicate, wing-shaped cameras replace the exterior mirrors. Behind the door opening is a large, vertical sideblade like that on the Audi R8 high-performance sports car. It feeds intake air to the V10 TDI engine. A second, smaller blade behind the side window is moveable and facilitates the flow of air through the engine compartment.

The interplay between protruding and recessed surfaces continues at the rear of the car. A concave section extending across the entire width integrates the Audi rings, the tail lights and the third brake light, which runs as a flat strip between the lights. The license plate is mounted on another recessed surface in the lower section of the back end. The diffuser houses the two large, round tailpipes of the exhaust system.

A large rear window exposes the TDI engine. The entire rear bodywork can be flipped upward in one piece like with a race car for maintenance work. The occupants’ luggage is stowed at the front of the car, where there is room for two trolleys or a golf bag.

The interior of the Audi nanuk quattro concept has been reduced to the essentials. The architecture revolves around the instrument cluster. A carbon island accentuates the cockpit and provides for a clear driver focus. The instrument panel seems to float and emphasizes the horizontal lines and the width of the car. It is supported by aluminum stirrups at the center console, which have soft pads as leg rests. Besides numerous storage compartments, there is also a holder made of a soft material in the scissor doors.

All control elements, including the controls for the electronically controlled air suspension, the touchwheel for navigation and multimedia functions and the turn signals, are concentrated on the center tunnel console and the steering wheel. The seats, with folding backs, pronounced side bolsters and integrated head restraints, are power-adjustable. A mobile phone can be charged inductively in the Audi phone box.

Rather than physical dials and needles, the show car has a freely programmable instrument cluster. The driver can call up a variety of displays and information as desired. Two small monitors in the area of the A-pillars serve as digital exterior mirrors and display the images from the cameras on the doors. The same function is provided by the center display mounted on the headlining, which replaces the rearview mirror.

Dark aluminum shines at the front of the instrument panel, whose surface as well as the seats, arm rests and door panels is covered in fine mineral gray leather. The third characteristic material in the interior of the Audi nanuk quattro concept is CFRP.