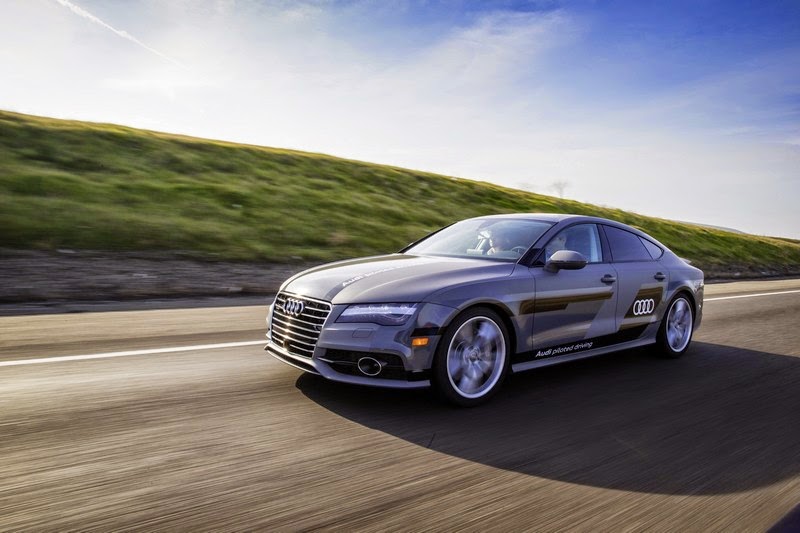 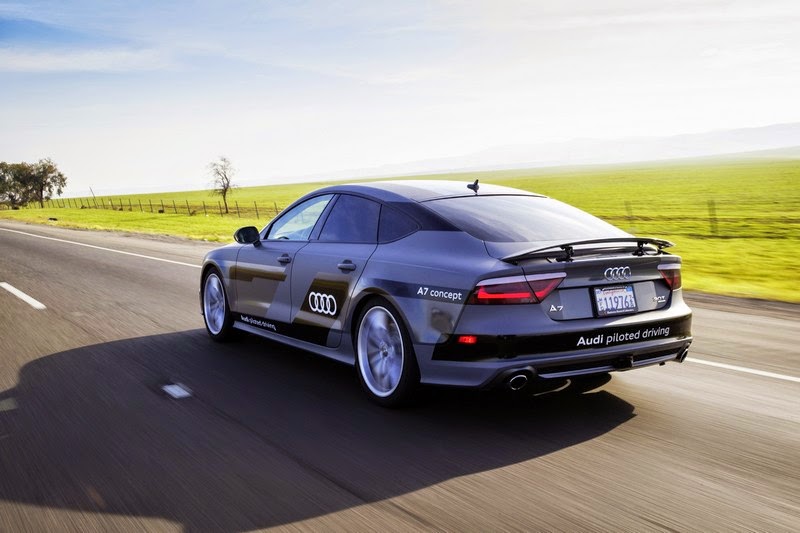 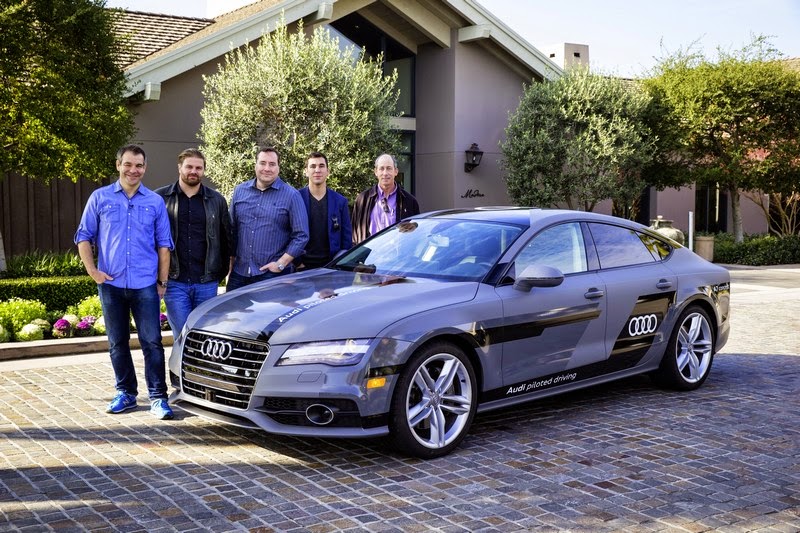 At more than 550 miles of piloted highway driving with journalists behind the wheel, Audi is demonstrating the era of automated driving is nearly here. The long-distance test drive of the Audi A7 piloted driving concept car will show that unprecedented performance can be achieved with series production technology. The drive will take place from Silicon Valley, California to Las Vegas, Nevada to attend the International CES 2015 (Consumer Electronics Show), one of the world’s most important electronics trade shows.

The A7 piloted driving concept utilizes the latest technologically advanced systems developed by Audi. The concept relieves the driver of driving duties from 0 to 70 mph, or just over 110 km/h. The car, that has been affectionately been named „Jack“ by the development team, can initiate lane changes and passing maneuvers. In addition, the A7 piloted driving concept accelerates and brakes independently. Before initiating a lane change to the left or the right, the vehicle adapts its speed to surrounding vehicles. If the speed and distance calculation is deemed safe, the vehicle initiates the lane change with precision and in a timely manner.

The piloted concept vehicle utilizes a combination of various sensors, many of which are close to production ready. The long range radar sensors of the adaptive cruise control (ACC) and the Audi side assist (ASA) keep watch of the front and rear of the vehicle. Two mid-range radar sensors at the front and rear respectively are aimed to the right and left to complete the 360 degree view. Laser scanners are mounted within the Singleframe grille and the rear bumper skirt.  The scanners deliver redundant information to provide detailed recognition of static and dynamic objets during piloted driving. The technologies are production ready including their vehicle integration and cost structure for vehicle production in the near future. A new hi-resolution 3D video camera, already integrated into the next generation systems found in the new Q7, takes a wide-angle view out in front of the vehicle. Four small front and rear mounted cameras view closer surroundings. Navigation data is used for basic vehicle orientation.

Before the piloted driving system reaches its limitations, in city environments for example, the driver is requested to take control of the vehicle to ensure proper safety. Multiple warning signales work in unison: colored LEDs at the base of the windshield, signals in the driver information display, a Central Status Indicator (CSI), as well as a acoustic warning indicator requires the driver to retake control. Should the driver ignore the signals, the system activates the hazard lights and brings the car to a full stop while minimizing any risk. In most instances the vehicle is stopped on the right emergency lane.

The training for the jounalist test drivers taking part in the 550 mile trek took place several weeks ago at the Arizona Proving Grounds. Each journalist will drive approximately 100 miles utilizing the piloted driving system. A trained Audi professional test driver will accompany the media from the passenger seat for added safety.

Audi will present its “Next Chapter” at CES from January 6th through 9th, 2015 in Las Vegas. The technologies of today and the projects of tomorrow will be presented at one of the most relevant, trendsetting electronic trade shows in the world. The primary topic will be the the connected car with its surroundings. Piloted driving, new user and display interfaces, modern infotainment and new Audi connect solutions, as well as LED and laser-matrix lighting technologies will be presented. These and additional highlights will be shown as part of the world premiers: a show car and the interior model of the new Audi Q7*.