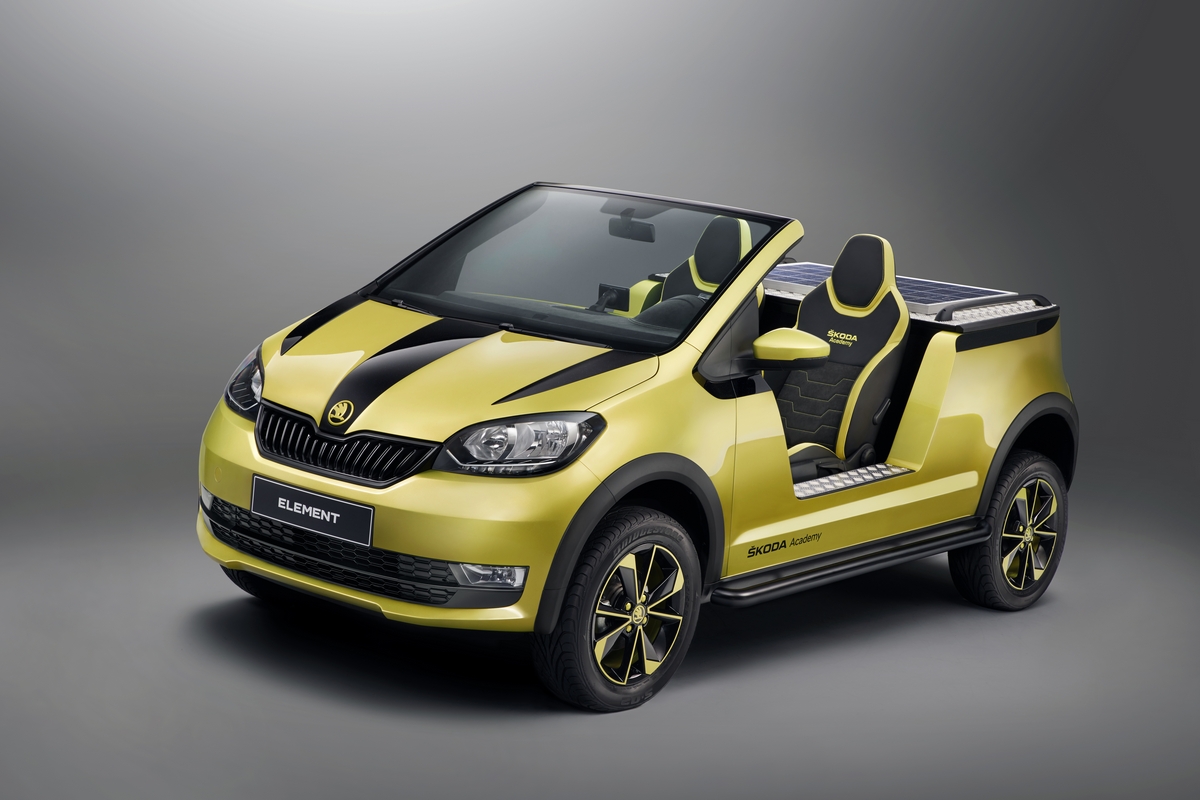 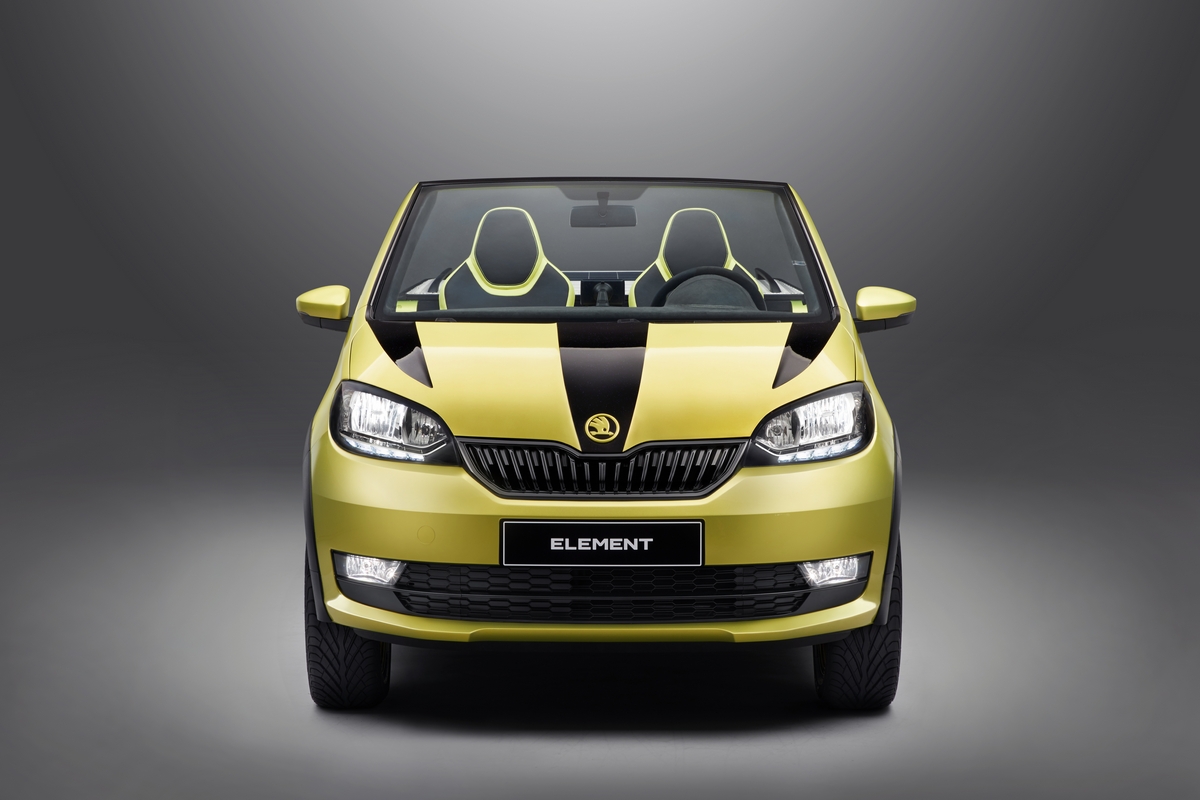 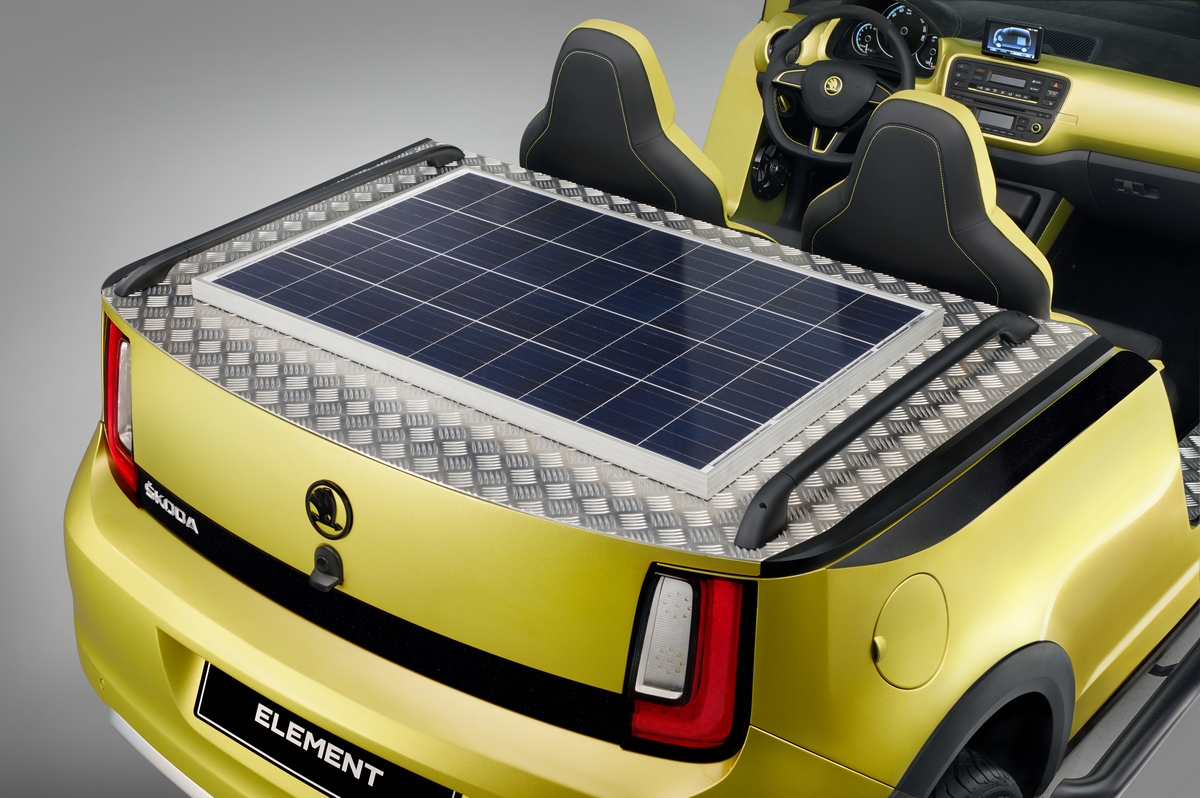 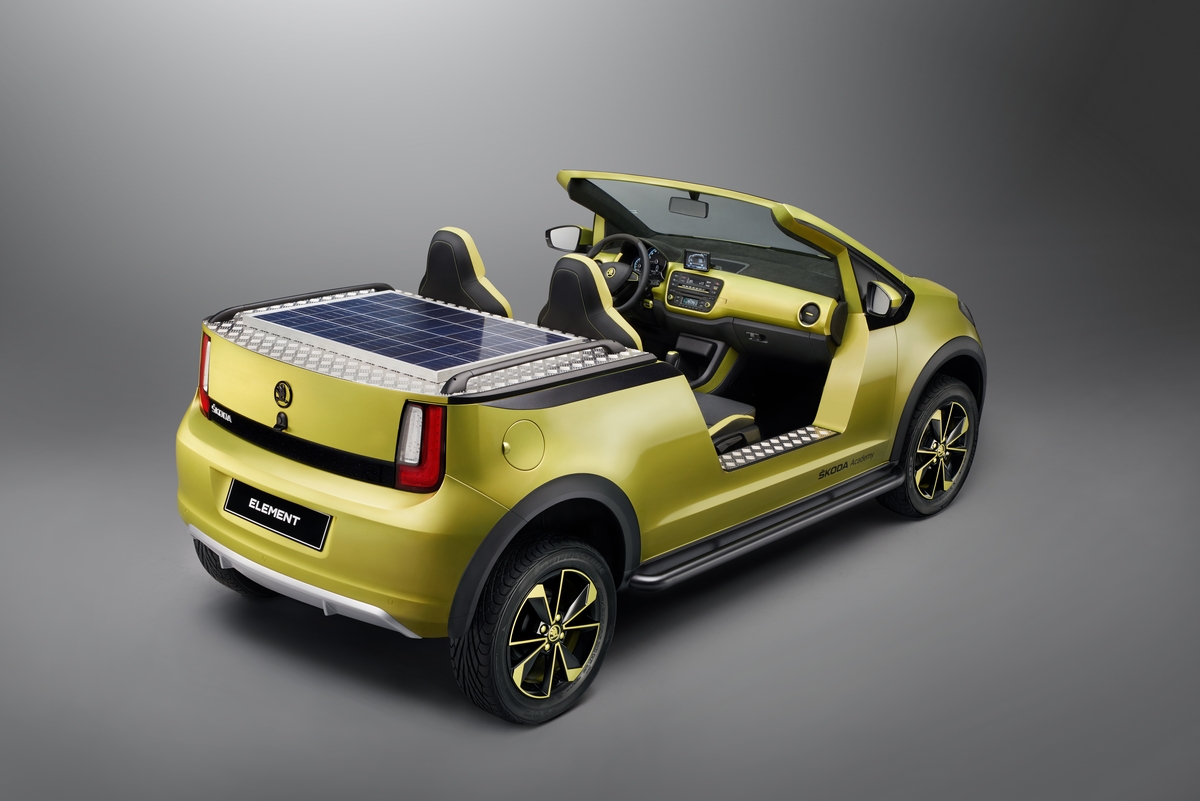 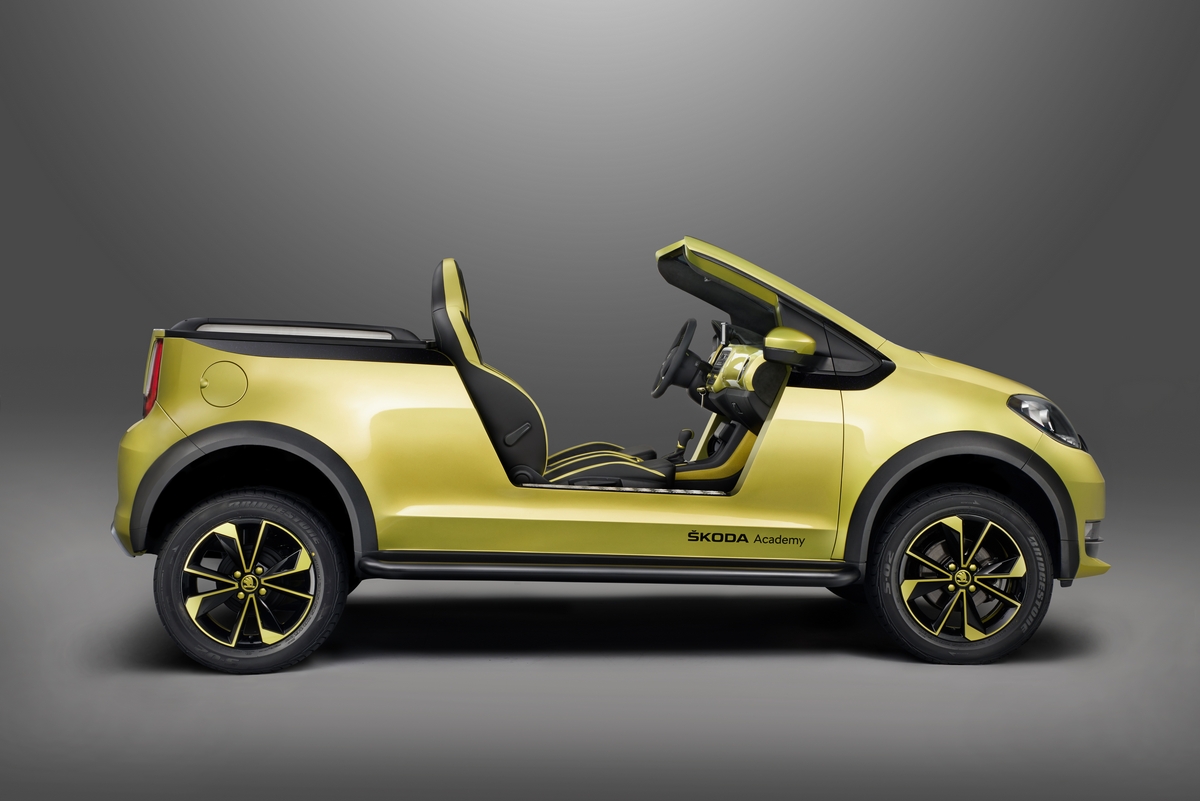 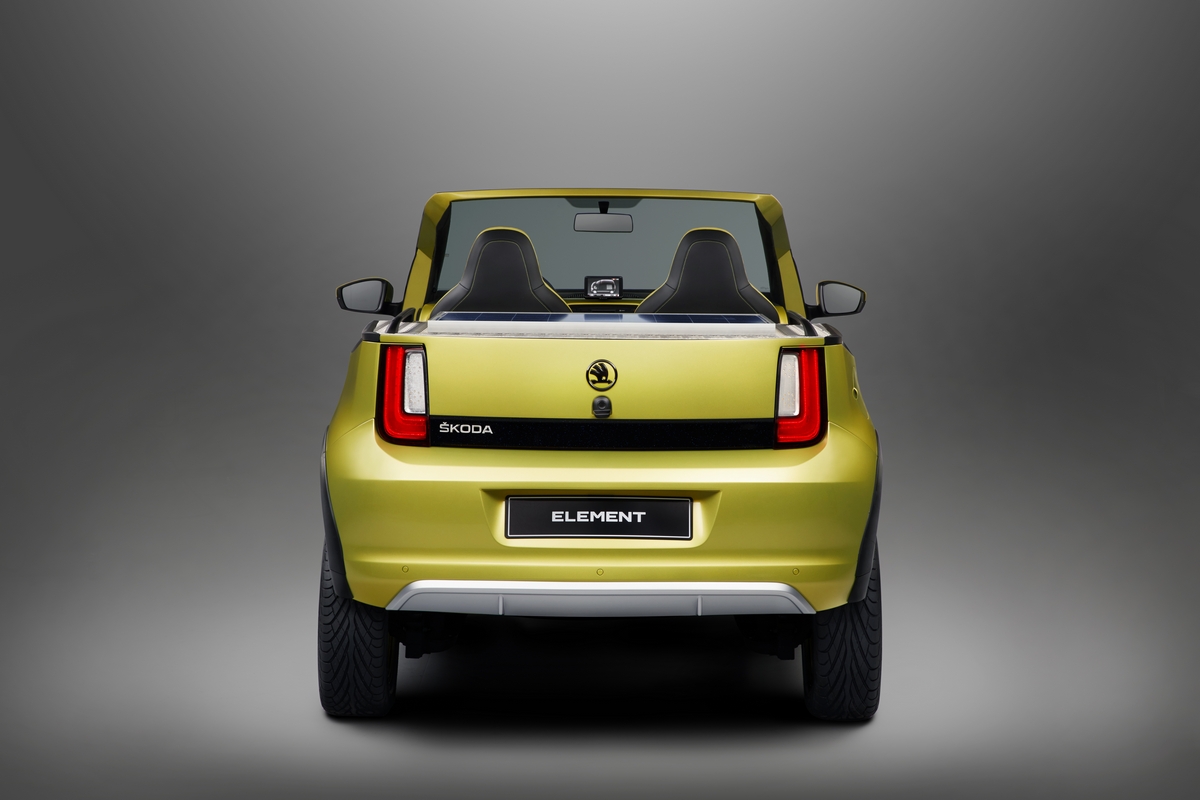 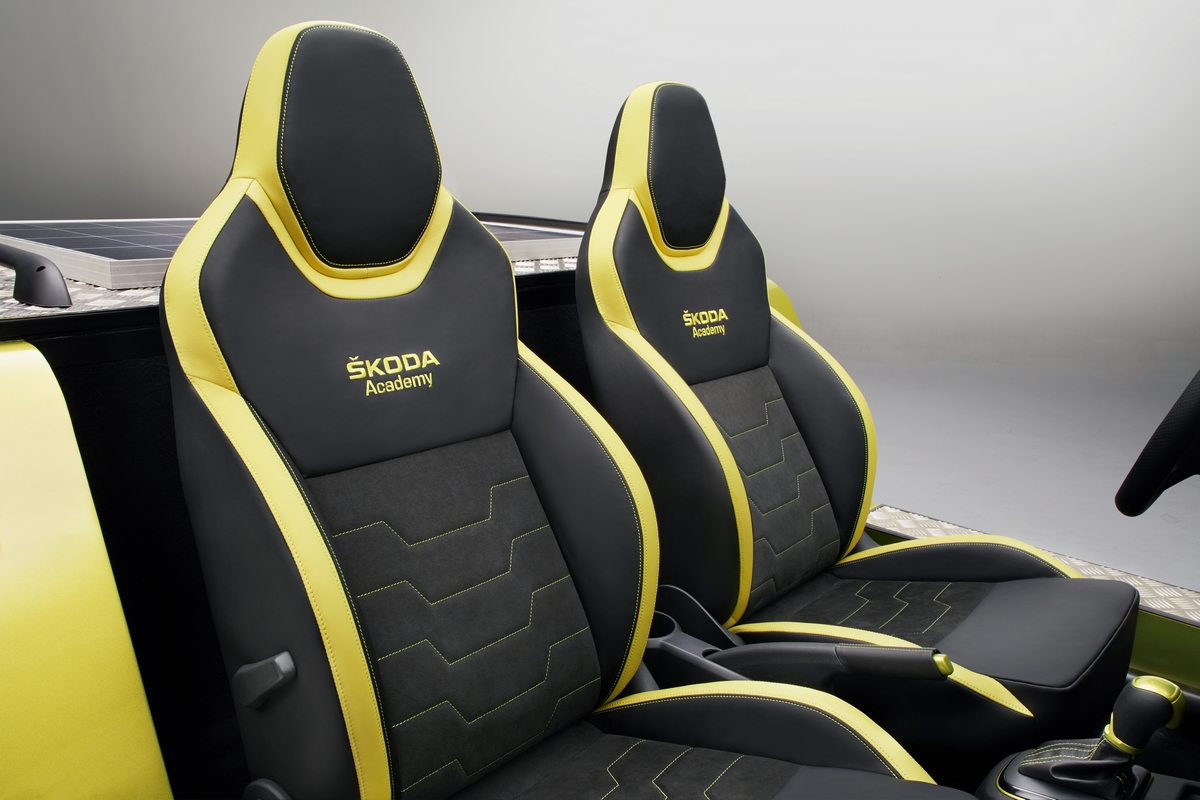 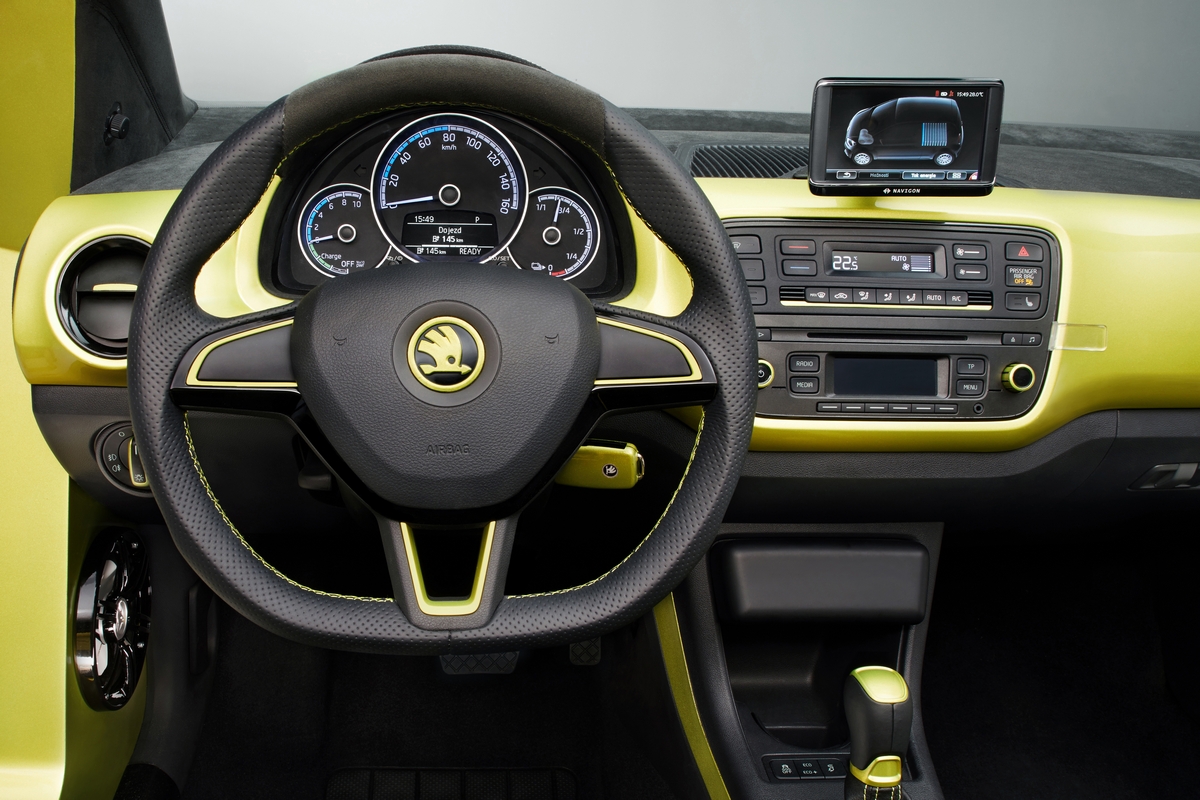 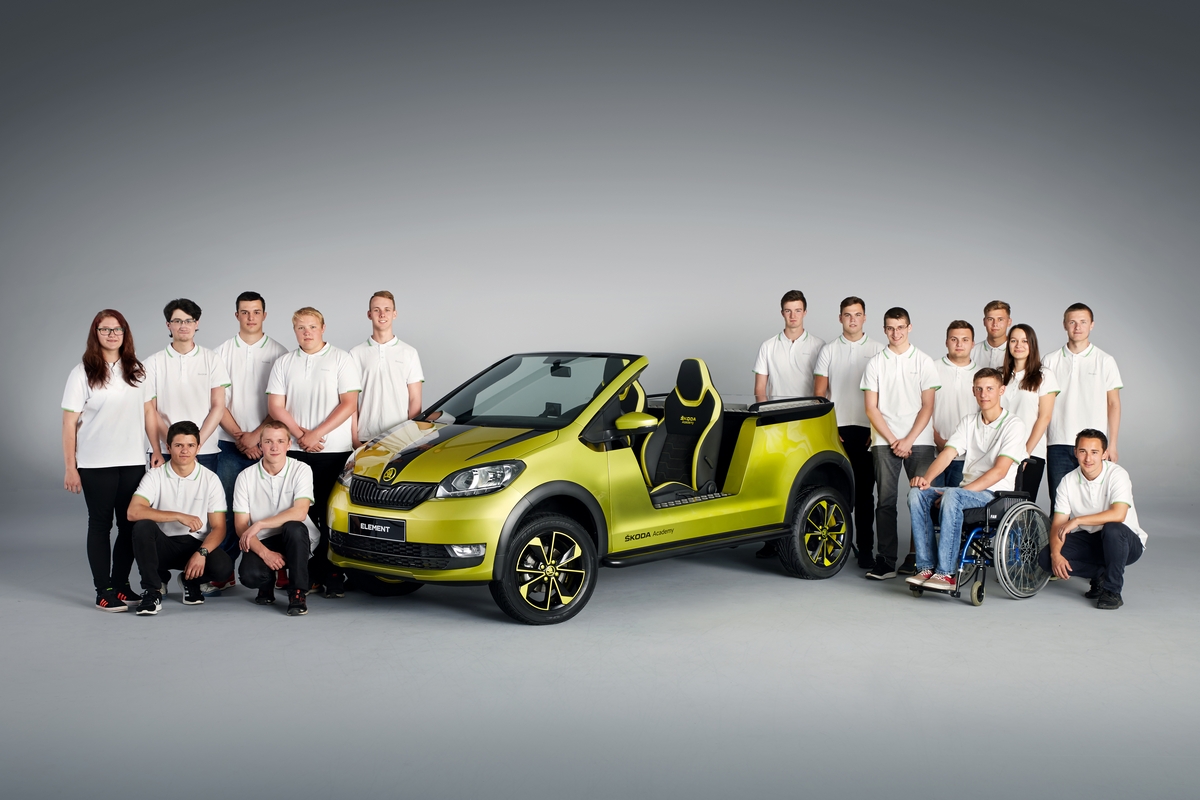 › The ŠKODA CITIGO provided the platform

​The ŠKODA ELEMENT is 3,597 mm long and 1,641 mm wide. With no roof or doors and just two seats, the student car not only has 60 mm more ground clearance, above all it is also visually a totally discrete model – a classic, open buggy.

The silver-coloured underbody protection at the front and rear as well as the black/yellow 16-inch SCORPIUS alloy wheels with all-terrain tyres are particularly striking. The high wheel arches are framed by a black trim which continues along the bottom edge of the sills between the wheels, creating a narrow running board. There are no doors; you just climb over the side sills decorated with aluminium checker-plate strips and slide into the sports bucket seats. The rear lights feature LED technology. The ŠKODA students also considered the smaller details, with the car’s yellow (Dragon Skin) brake callipers, demonstrating their attention to detail.

The black leather/Alcantara bucket seats with yellow edging and decorative stitching originate from the ŠKODA OCTAVIA RS. They are adorned with the embroidered name of the ŠKODA Academy. The two-tone theme also continues in the individually designed interior. The painted front of the instrument panel shines in pearlescent yellow, the steering wheel and gearstick are covered in black leather and bear golden-yellow details. The surface between the instrument panel and the windscreen is lined with black Alcantara.

There is also a Navigon navigation system on board, which – fitted in a separate bracket – seems to float above the air conditioning controls. The car’s most striking feature, however, can be found where the ŠKODA CITIGO has its back seats. The students fitted a solar panel as well as a Smart TV behind the front seats which can be paired with a smartphone via Bluetooth. The Smart TV is located in the aluminium-decorated boot lid to which the solar panel has been mounted, sitting between two rustic, matt-black brackets. One speaker next to each seat and two additional speakers fitted in the boot turn the ŠKODA ELEMENT into a 400-watt beach club on wheels. The students have also integrated a cool box into the boot that is classily lined with blue carpet. The cool box is connected to an additional battery and powered by the solar panel.

A compact 60-kW (82 PS) electric motor with a torque of 210 Nm powers the ŠKODA ELEMENT. The electric design study accelerates from 0 to 100 km/h in 13 seconds and reaches a top speed of 130 km/h. The lithium-ion battery integrated in the car floor has a capacity of 18.7 kWh. This means that – depending on the route profile, driving style and payload – the ŠKODA ELEMENT has a range of up to 160 km.