MART X-Streameast - a stillborn Russian vision of a supercar

This is the project of a car with such an unexpected name, which has been prepared by a Moscow limited liability company called Mart Limited. At Avtoindustria-92 exhibition they have presented a sensational exhibit – a mock-up of the first domestic supercar. Ferrari F40 and McLaren F1, Audi Avus and Lamborghini Diablo, Jaguar XJ220 and Yamaha OX99-11 – these famous concepts have now been followed by a Russian car called X-Streameast. Here is a story about the car told by Mart technical director – A. Zacharov.

One of the main activities for our company is a contract with Russian Defence industry in automotive production. With such huge abilities it is much simpler to produce small series of cars constructed with the utilization of extreme technical ideas and newest materials. The completion of a XXI century supercar, which would become a starting point for automotive technology, is included in Mart Limited program. Such cars have become almost obligatory in an assortment of premieres at each International autoshow and have given a large contribution to the company or country gaining the reputation of leader in automotive technology.

This is the reason why we have come with an idea of making our own supercar, based on our own experimental production car department, research based and already established with vast connections with Russian military complex enterprises and specialists. Our X-Streameast car is conceived to have the most efficient ratio between minimal aerodynamic resistance and maximal downforce. Two-seater supercar with minimal level of comfort must, following our plans, have a non-traditional body structure of composite materials and an engine based on a new layout scheme.

On a first development stage, a full scale mock-up has been made for aerodynamic testing. That was in exhibit at Avtoindustria-92. In the summer we plan to build a fully functional testing mule so that in autumn 1994 we can produce a final prototype. Next step is to arrange a small series production, which, in best of chances, should start in 1995.

X-Streameast has a mid-engine layout scheme. The car is built around a ‘double bathtub’ monocoque with body panels made of composites, mostly carbon fibre. Air ducts, fuel tanks and cockpit are built directly on the monocoque. Here, the material and volume of the structure (which serves as both frame and body) is used with the utmost rationality.

At the front of the monocoque are attached the front suspensions, steering mechanism, pedals and instruments. The engine (built in a single block with transmission and rear suspension) is mounted on a frame, which is hinged to the monocoque’s rear end. The front of the engine is buried into a self-supporting housing, and to make the maintenance easier, the frame can be rotated horizontally so that the engine will take almost vertical position. It is caused by a specific construction of the engine – NAMI AR7,2. It is developed using a so called axial scheme, when its seven cylinders are placed aflat, like the drum cartridge in a revolver, and the driveshaft is parallel to the con rods. Valve mechanism, spark plugs and other mechanical elements that need maintenance are placed in the front end and buried into the monocoque shell, so it is hard to access them. The rotating underframe resolves the accessibility problem. The engine is very compact, weighing 160kg and having a displacement of 4650cc it provides 180hp at 3000rpm. Depending on charge, the displacement varies automatically, helping to achieve the most efficient ratio of power and ecological indicators.

Five-speed manual gearbox, vented disk brakes with 4-piston callipers, independent suspension all-round, rack steering mechanism and cast aluminium alloy 17 inch wheels are some features of the X-Streameast. With a 2700mm wheelbase, 1680mm front track and 1710mm rear track, the  X-Streameast’s length is just 3840 mm (a little longer than a ZAZ Tavria), with a height of 1000 mm (at the adult’s waist level) and 2000 mm width.

As for the body, we have developed its shape not only for as (in some aspects rather extravagant) the review of a modern supercar, but also according to aerodynamic demands, developed in-line with Mart concepts. Much attention has been given to the bottom shape. We used ground effect characteristics, so that the car will be pressed down by the oncoming airflow without additional aerodynamic devices like wings. All these factors have identified the car’s shape, which the body consists in three essential elements, given their different functions:

- The main aerodynamic element is an inverted wing shaped rear end (constructed as a development of the wing car concept). The role of the traditional side skirts is here performed by vortex flows caused by the body elements. The car’s rear end is made in a shape of diffusers without separator combs. Its upper side is concave to improve downforce.

- Middle body part, containing cockpit and engine bay, is teardrop shaped, helping to organize the air flow wrapping around the rear end of the body.

- The most specific aerodynamic element of the car is its front end, which organizes and distributes the oncoming airflow so that it wraps around the middle and rear end of the car. The big ground clearance at the front (190mm in static) allows to place in the centre of the undertray a small air intake for feed thetwo big water coolers placed on both sides of the car. The result is a much reduced drag and increased downforce.

Another characteristic element of the body design is the canopy covering the cabin. In its upper part there is a NASA-type air intake for the engine. In the rear wheels cowling two luggage boots are placed, storing about 100 litres in total.

The interior of X-Streameast is thoroughly developed from an ergonomics point of view, so a reliable and comfortable control is provided at speeds around 300km/h. The cabin has a ergonomically designed two-seater layout. It is also planned the installation of a head-on display, similar to aircraft designators. All the necessary information would be shown on a display on driver’s demand, reason why a regular instrument panel is missing. Mart are also working on a system of visual information sent directly to the driver’s retina. The car can also be fitted with a system for limited visibility conditions, which would use an infrared laser Doppler locator with an E-restoration image of traffic conditions to the same display. In the future it will be possible to install an automatic drive system through a specified route via navigation system, which would be able to specify the car’s location through radio beacon and satellite signals and automatically calculate the route from the starting point.

The attraction of military complex enterprises to X-Streameast demands sizable funding. Mart Limited, being a New York Stock Exchange participant, assesses funding of the program in 480.000-560.000 US dollars. Expenses can be returned quite soon.

The work on X-Streameast project continues. After building a fully functional prototype we plan to perform its road test, the complete results of which will be provided for the magazine readers.
Then the idea of making a car on that basis appeared, to work out Formula-1 technologies. We had relation with a big number of enterprises, and as a result of that communication project X-Streameast has appeared. It should have concentrated all the best in it. The car should have been able to drive within a year. One year as a metal construction with a body. Next year - carbon fibre body, third year - a tested and proven car, which would take part in competition.

At the same time a process modernization process for electronic devices produced at military factories would take place. It has been suggested that within 10 years the car would be able to deliver a person, for instance, from Moscow to St.-Petersberg automatically in ordinary road traffic. Sensors of the car would allow controlling the car without driver’s involvement.

Scanning beam feels the road - macrorelief and microrelief, and allows to control an active suspension. From the other side, the racing version of this car having completed one lap on a race track would be able to repeat this lap and make a speed record in specific atmospheric and weather conditions.

But a lot of different occasions prevented this project from completion. There was a fire, in which all the prototypes have burnt. While some leading specialists left abroad…[END]

Text: the text above is based on the original article published in 0 @C;5< (1993-05) and has been prepared with a great help of Alexander.

Please mention www.allcarindex.com when using this text or a part of it.

NOTE: The MART X-Streameast can be also found as Russo-Balt Extremist, Russo-Baltique Xtremist and under similar names. However, it has nothing in common with Russo-Baltique. 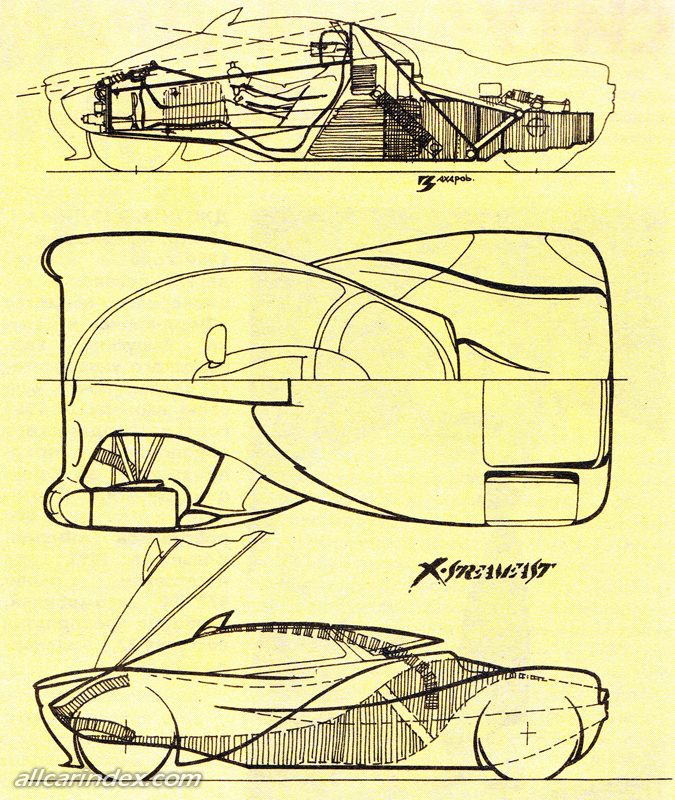 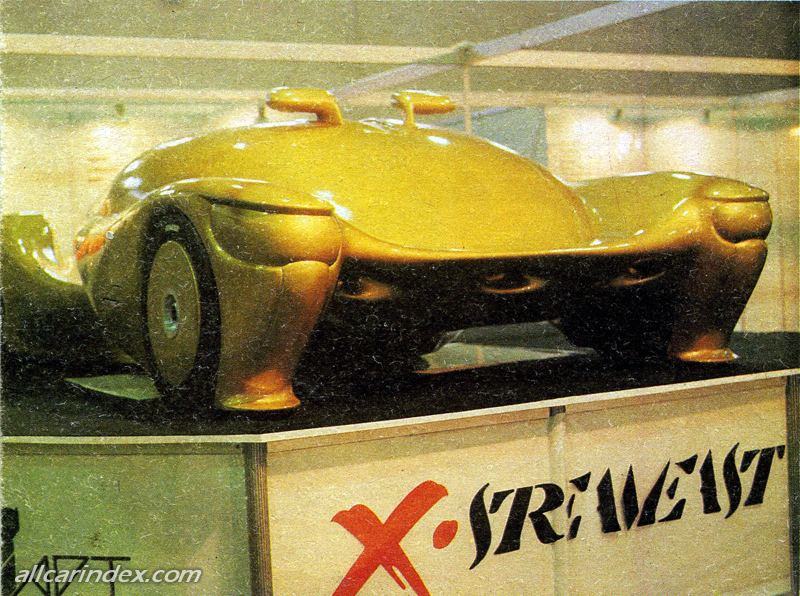 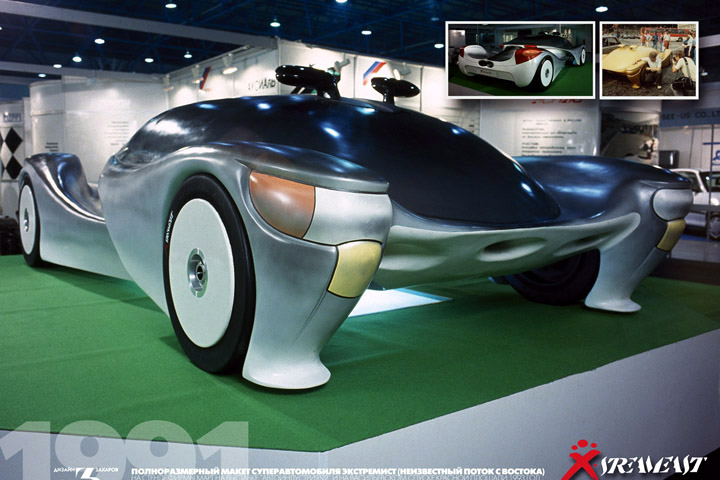