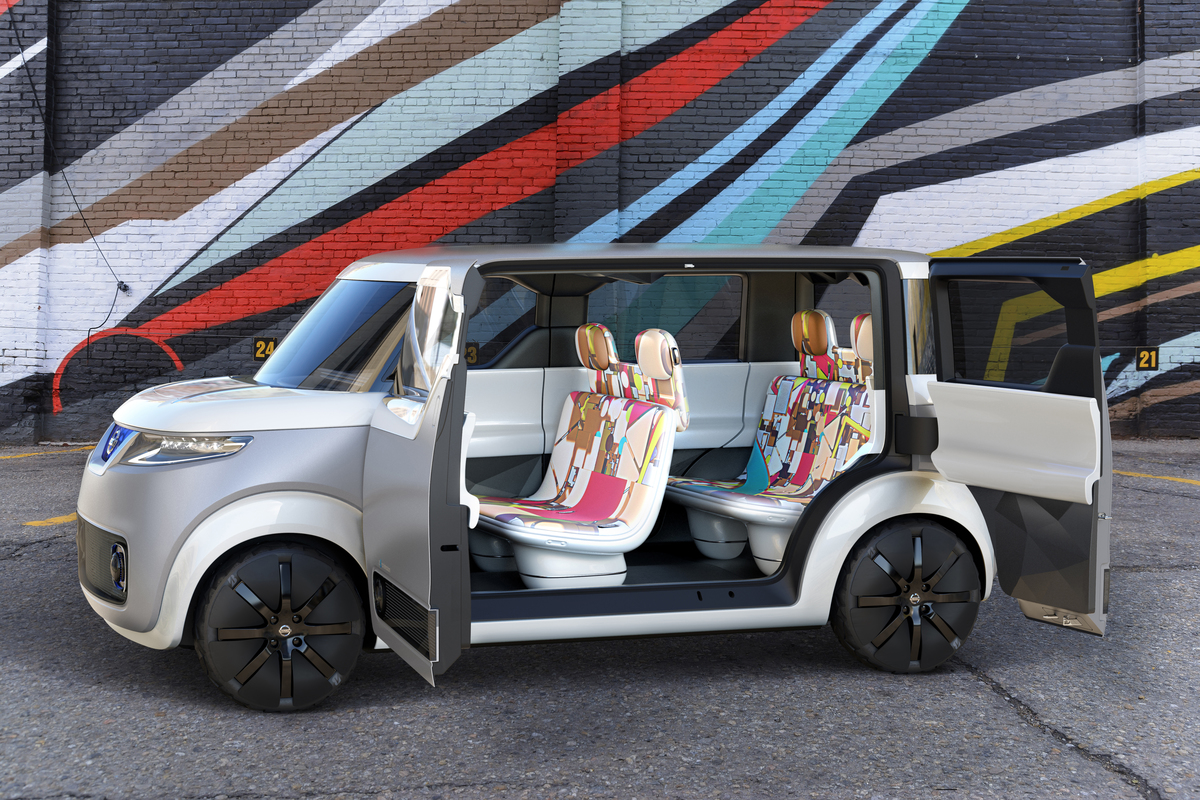 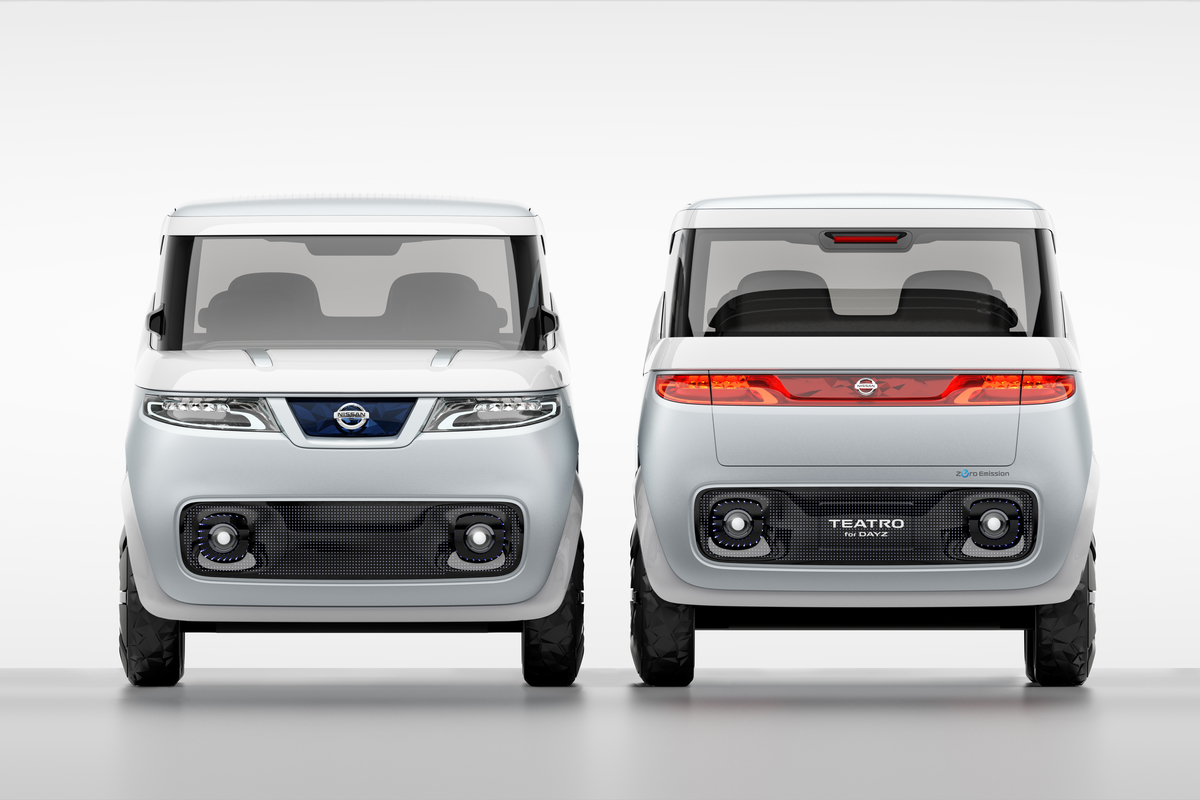 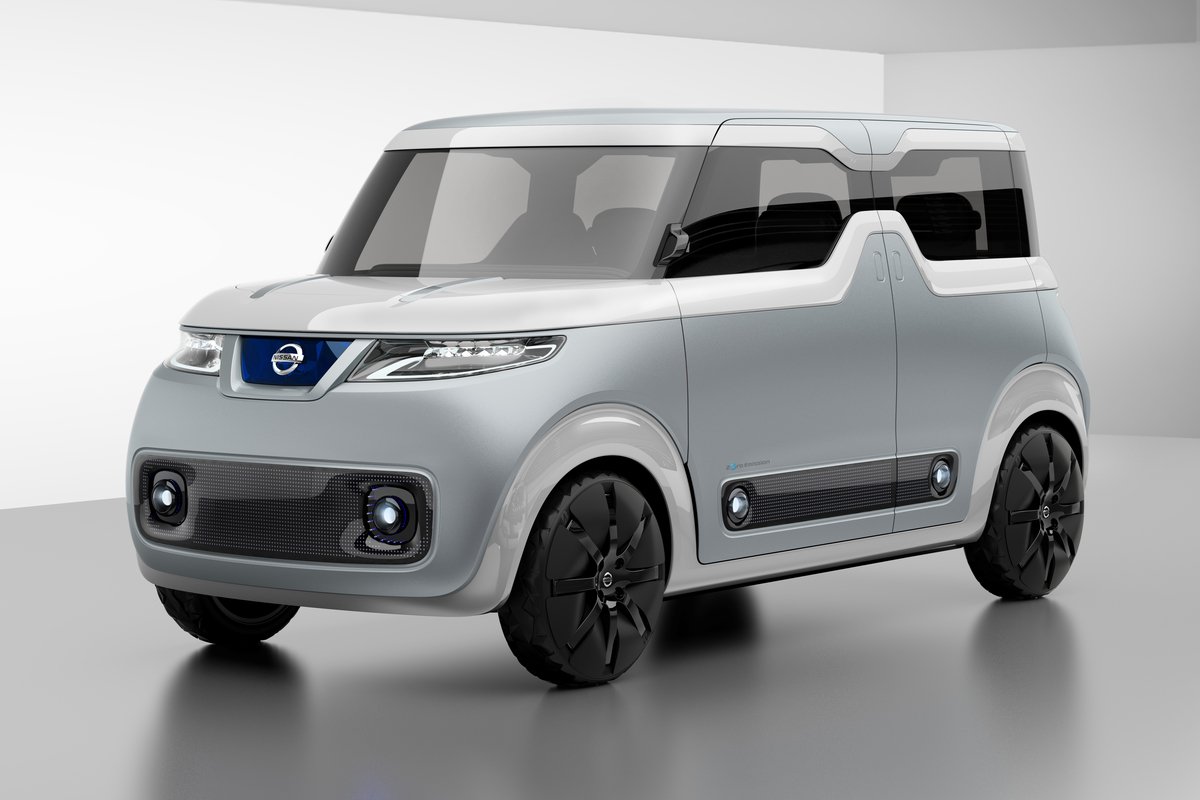 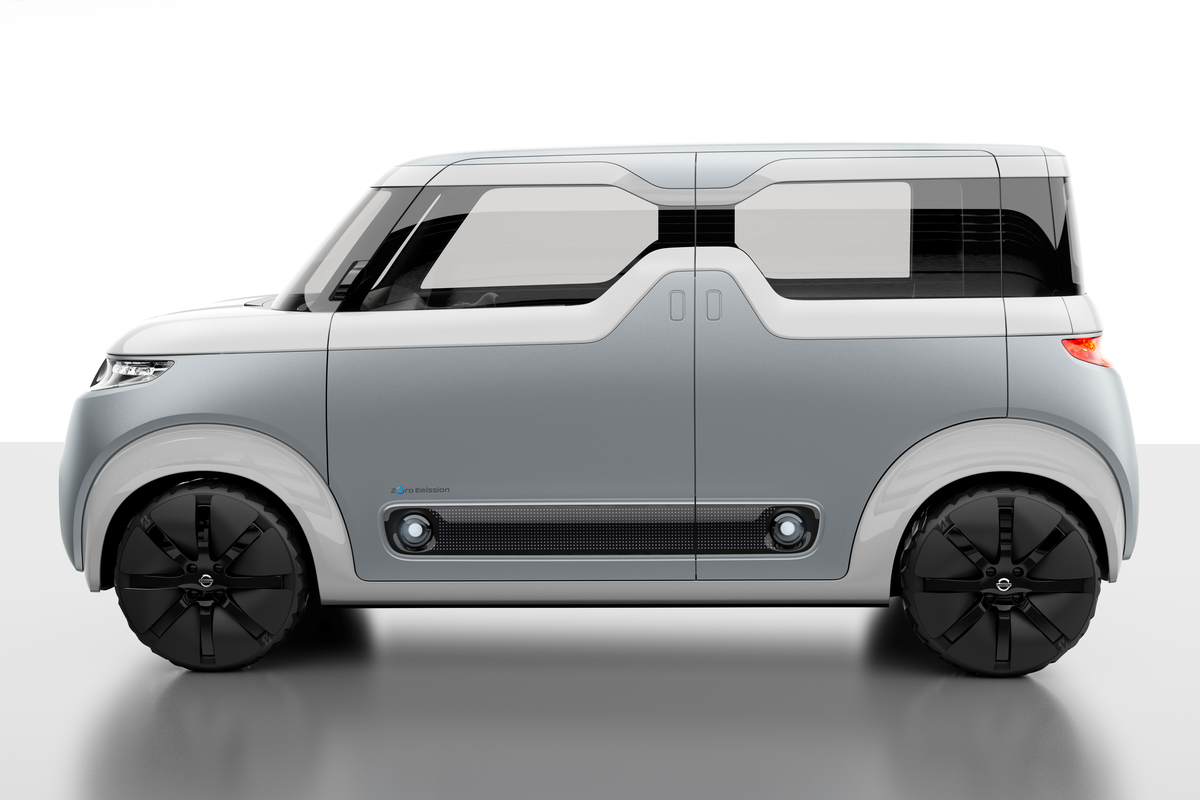 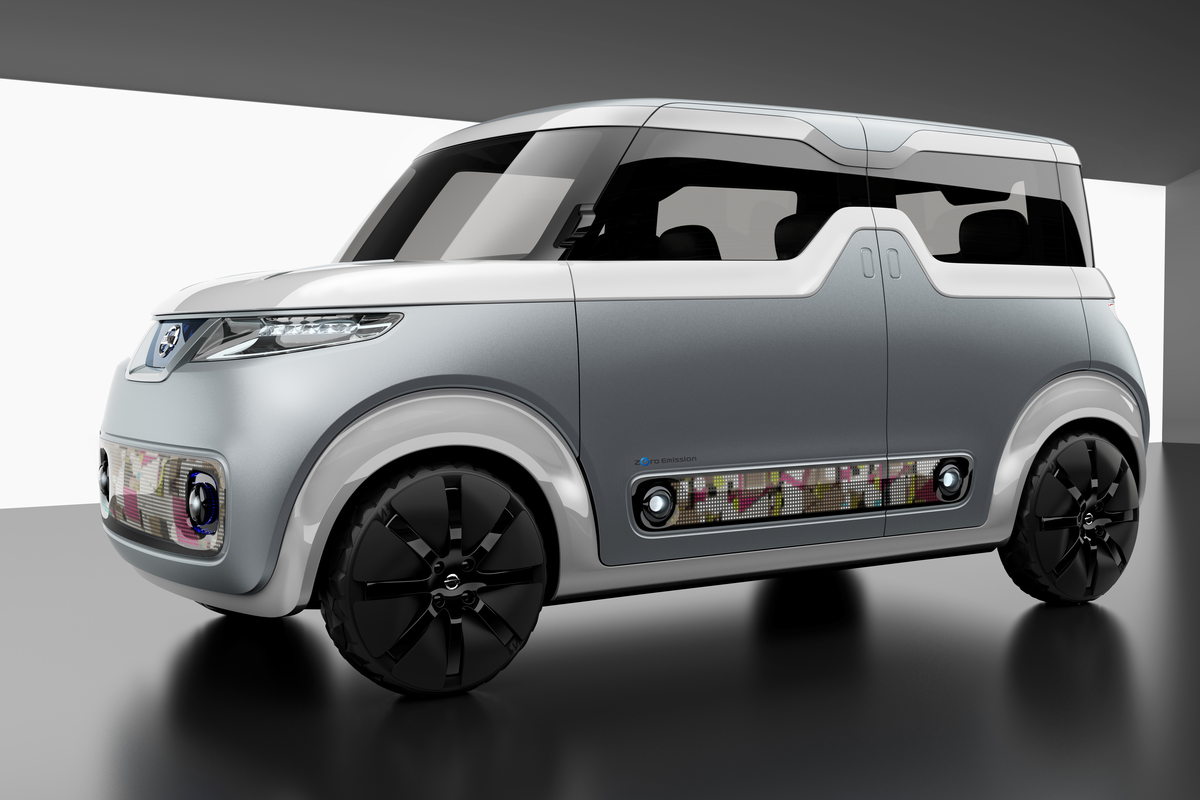 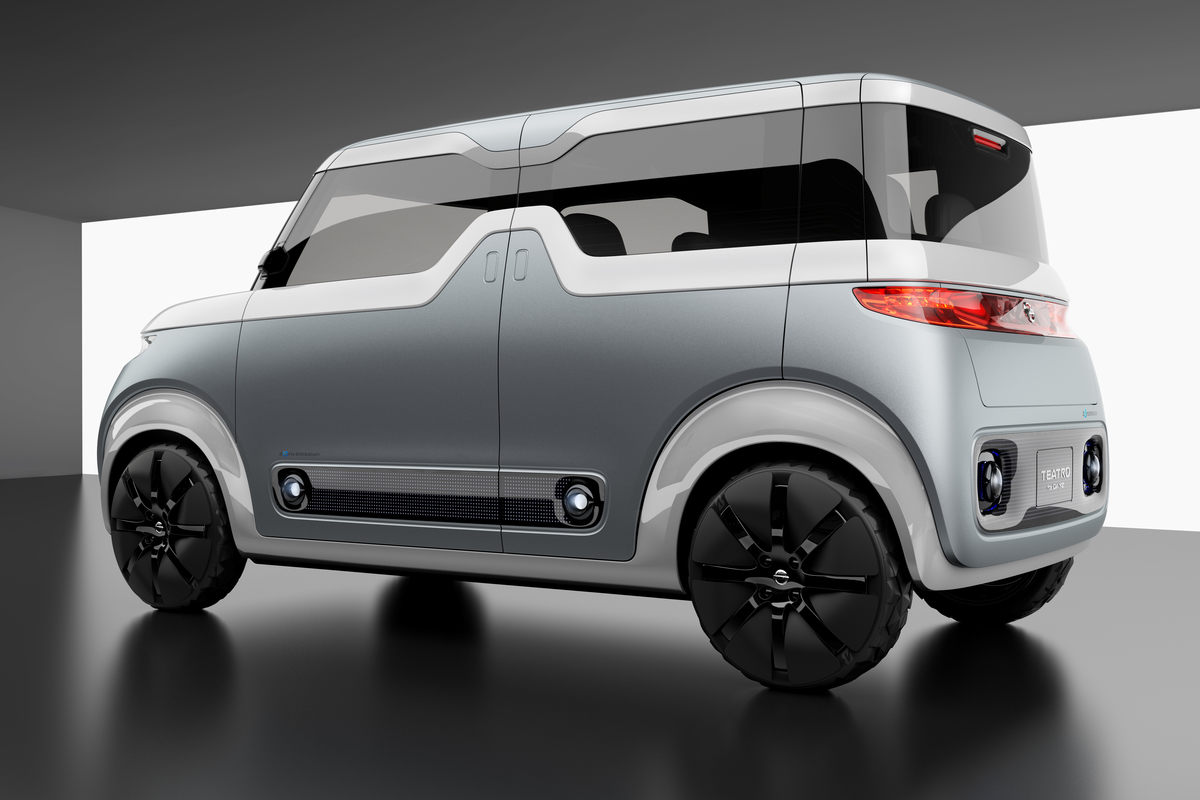 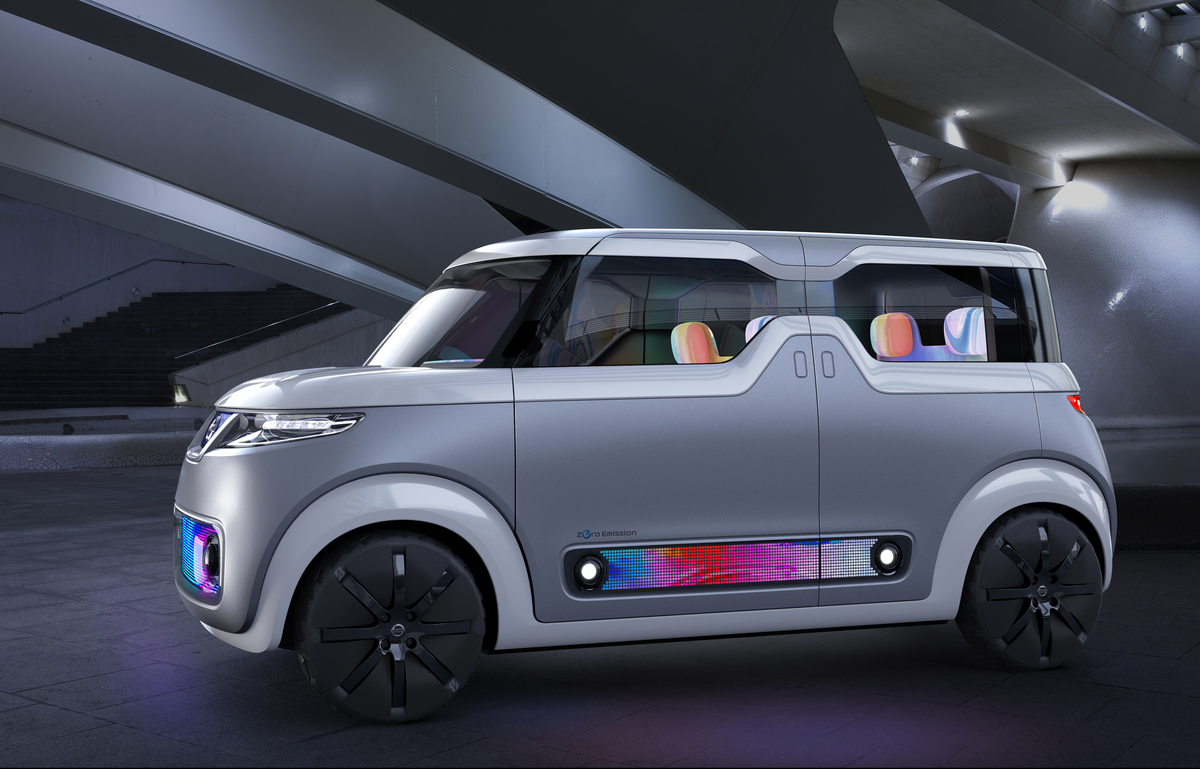 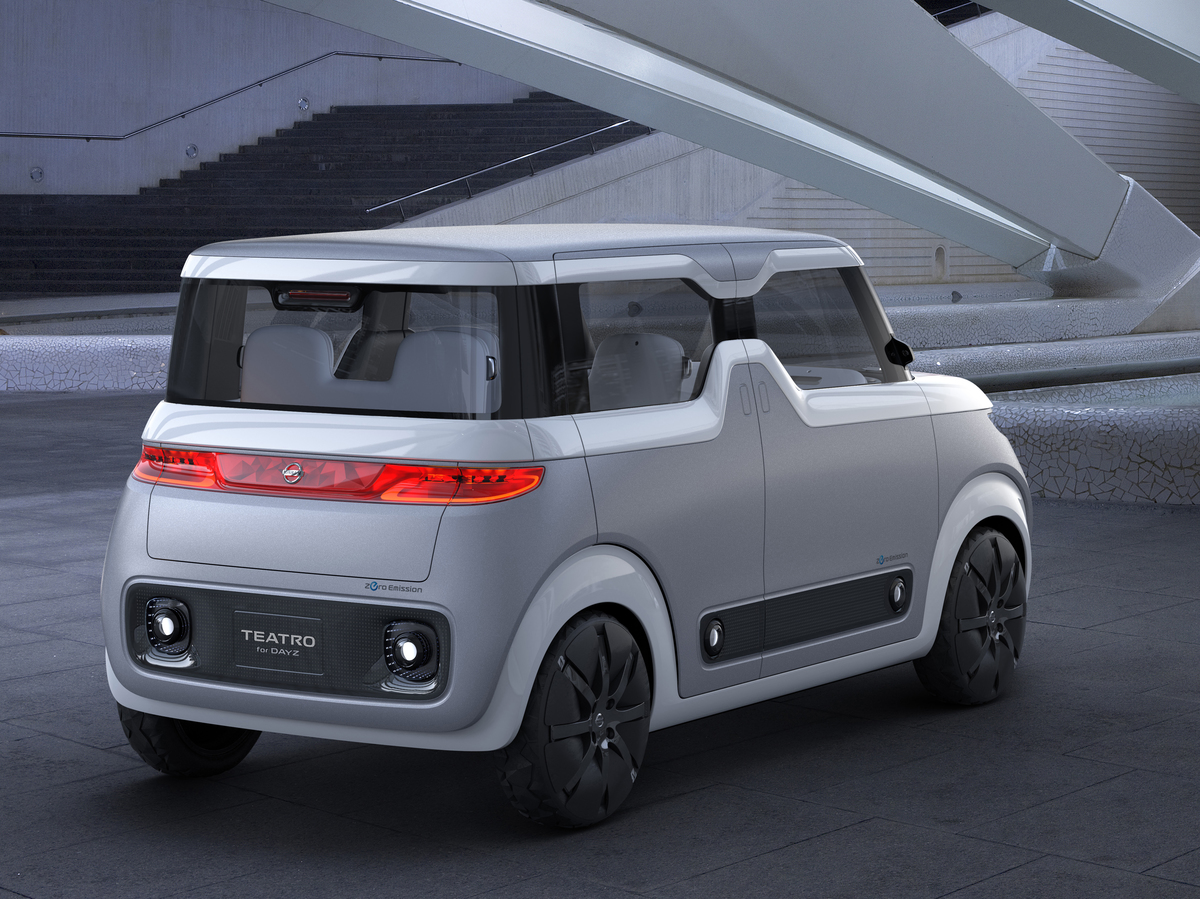 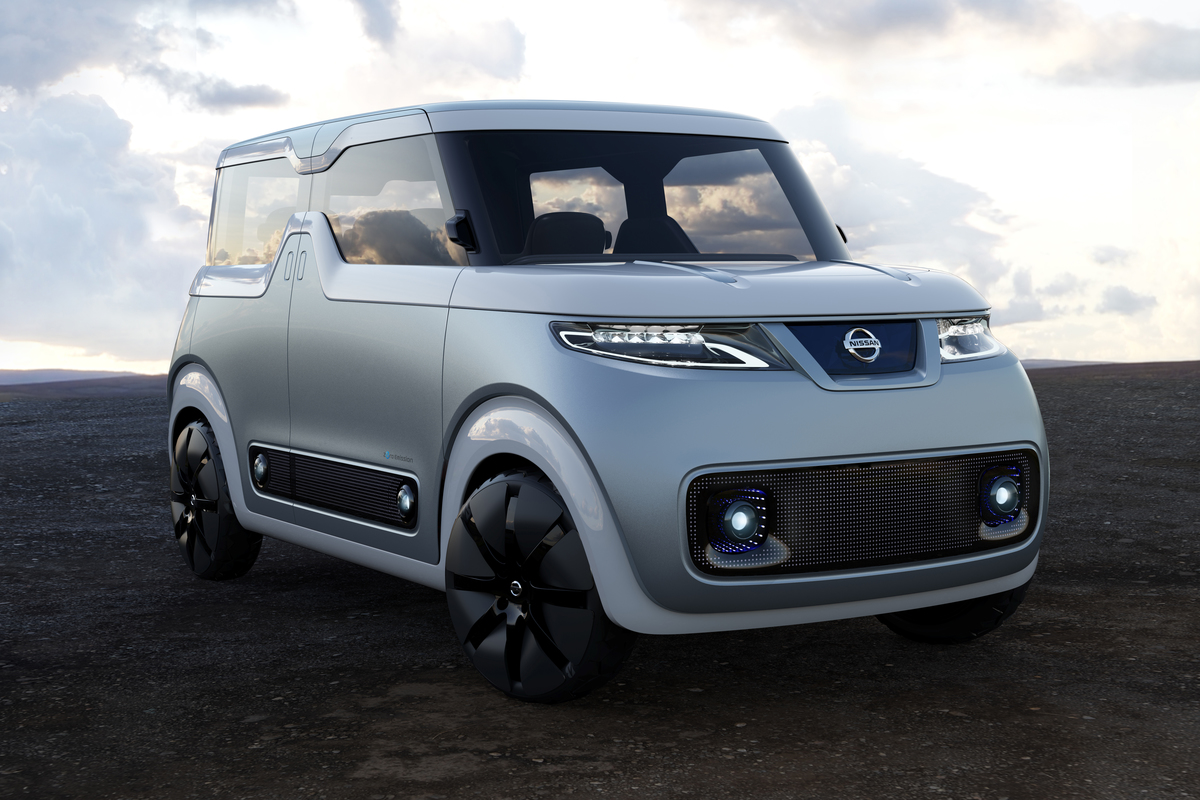 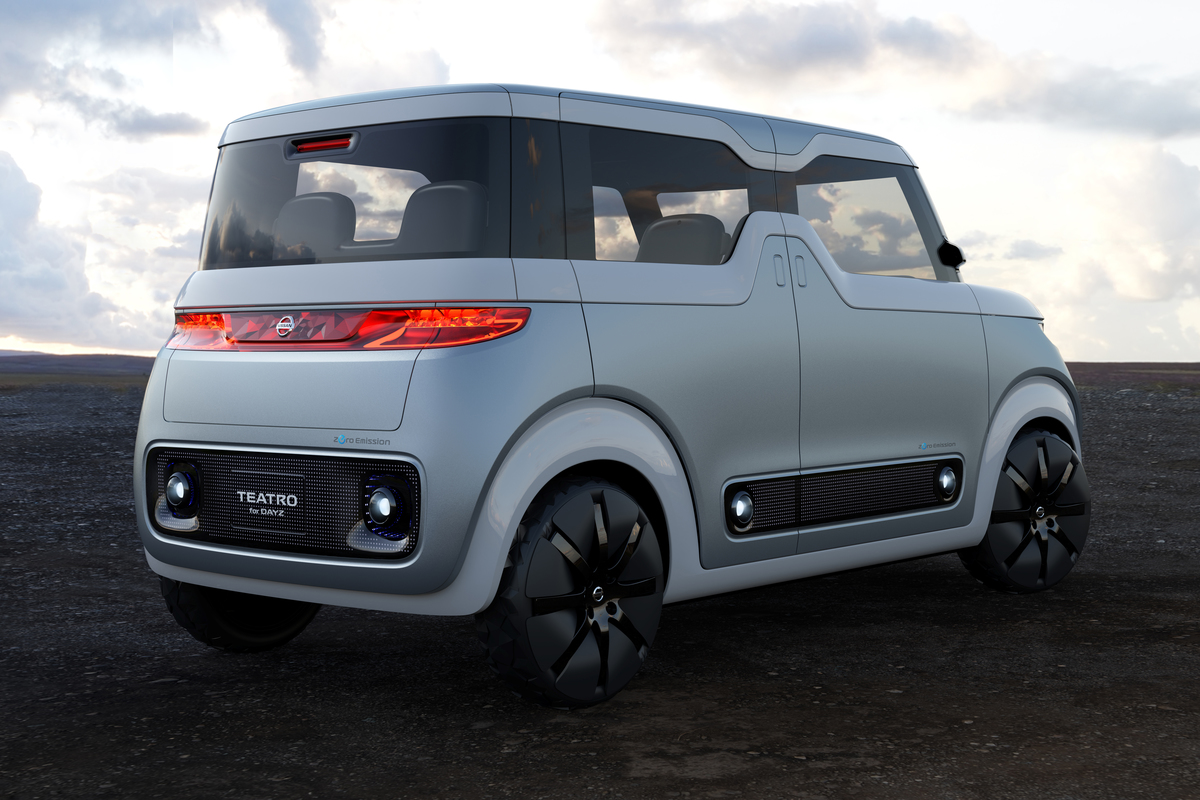 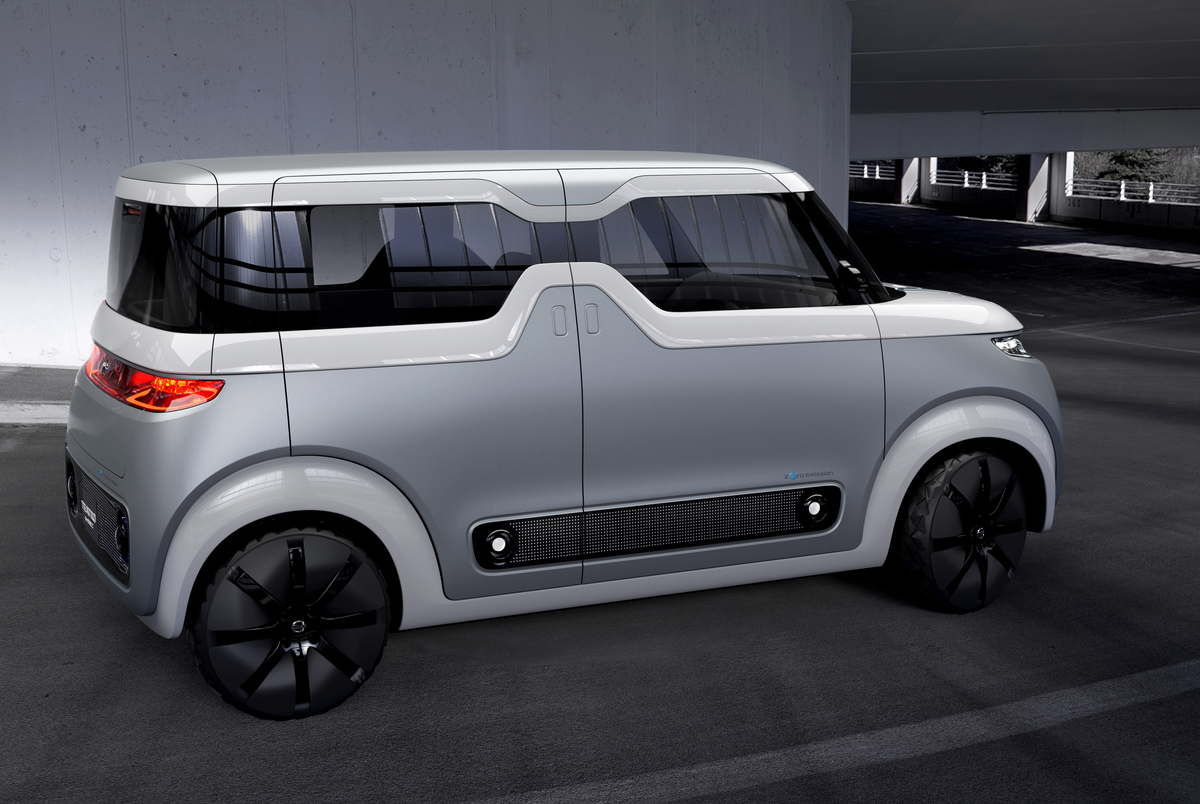 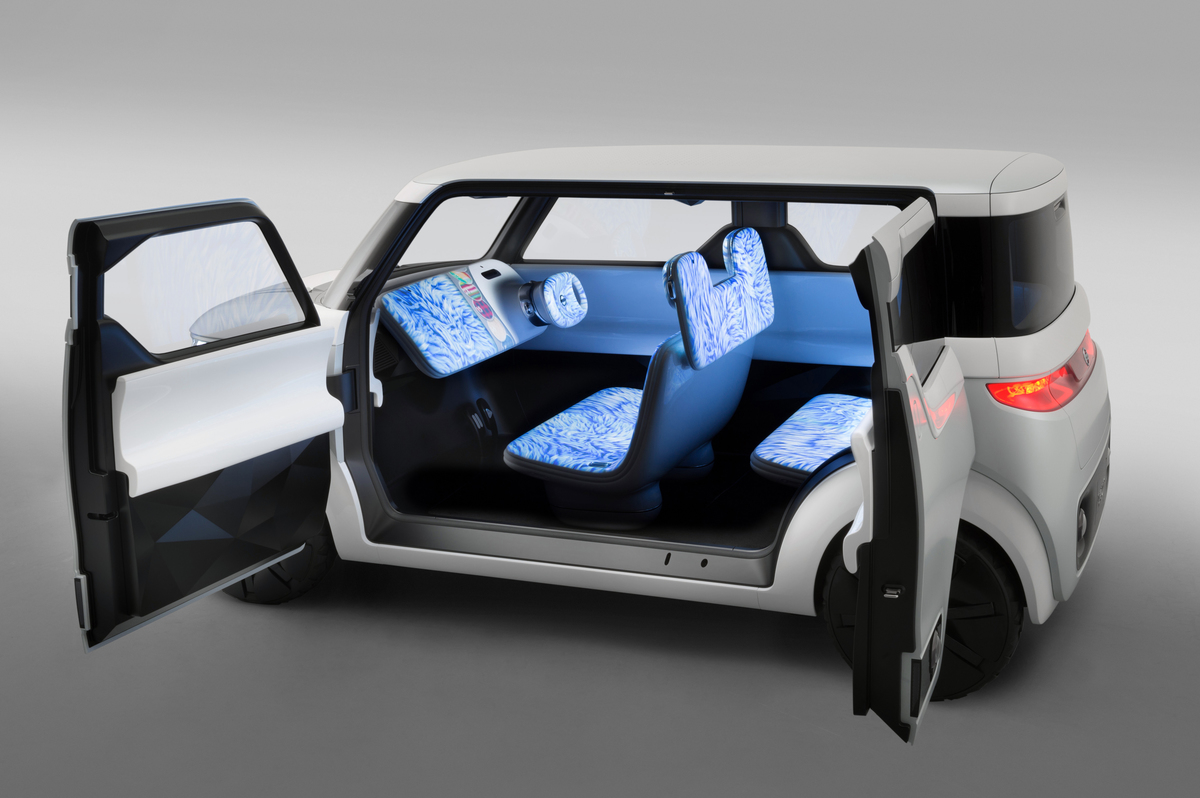 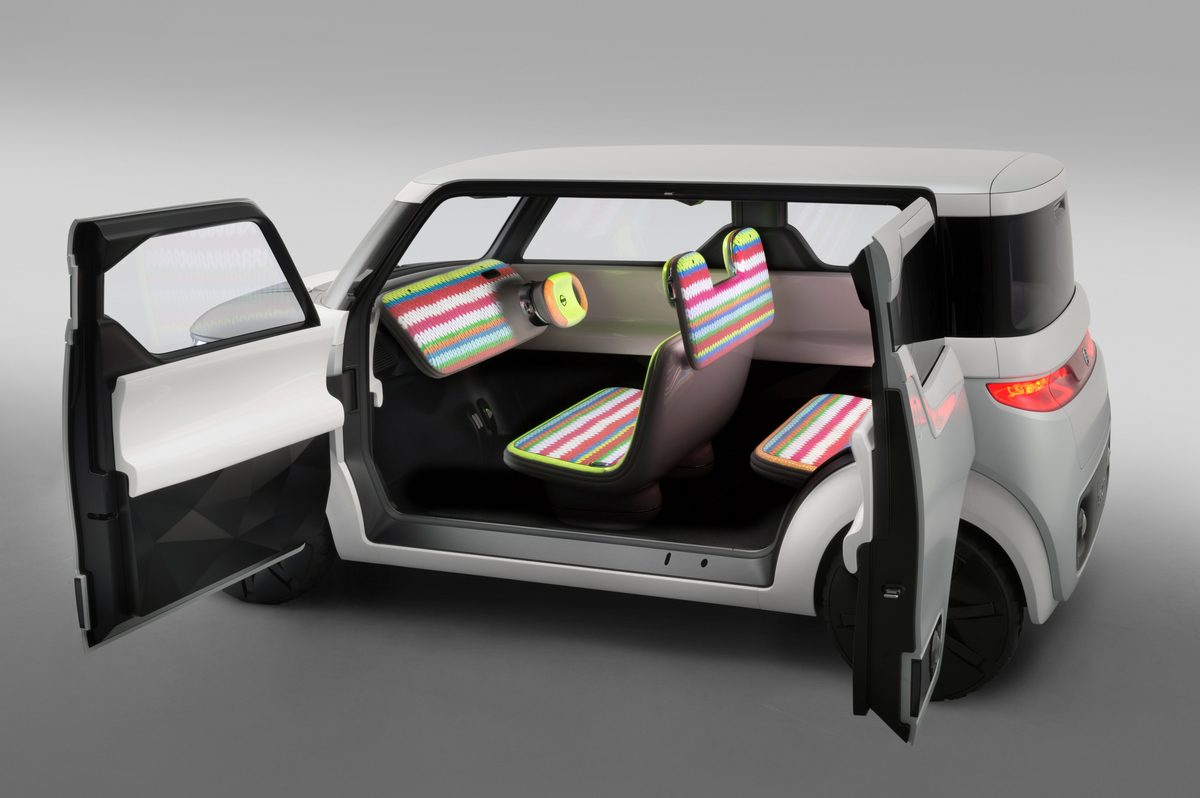 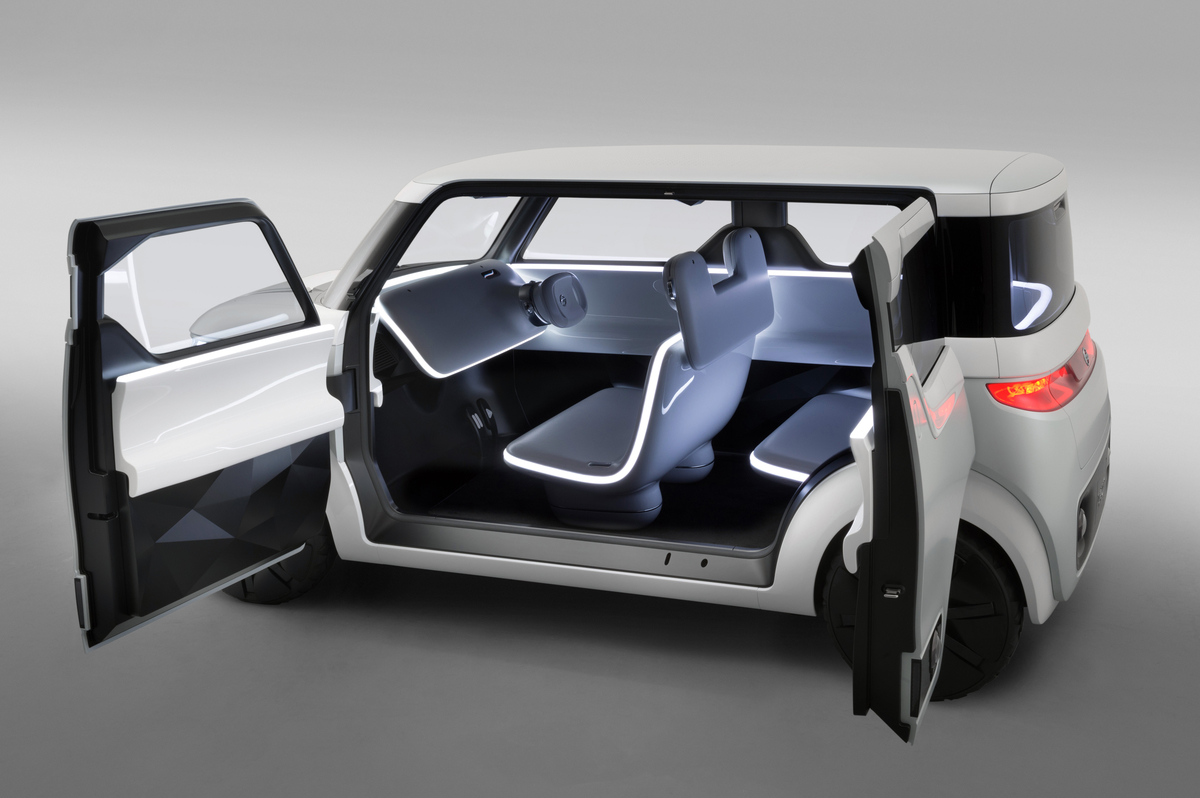 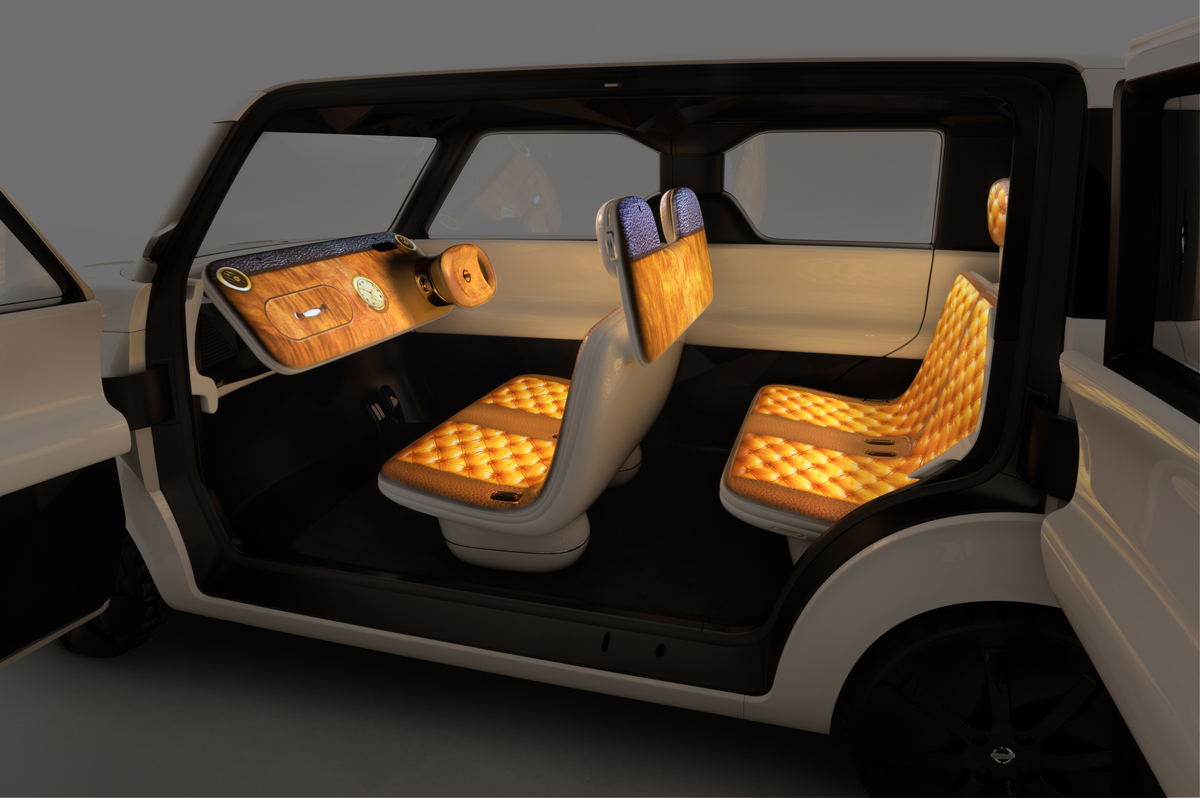 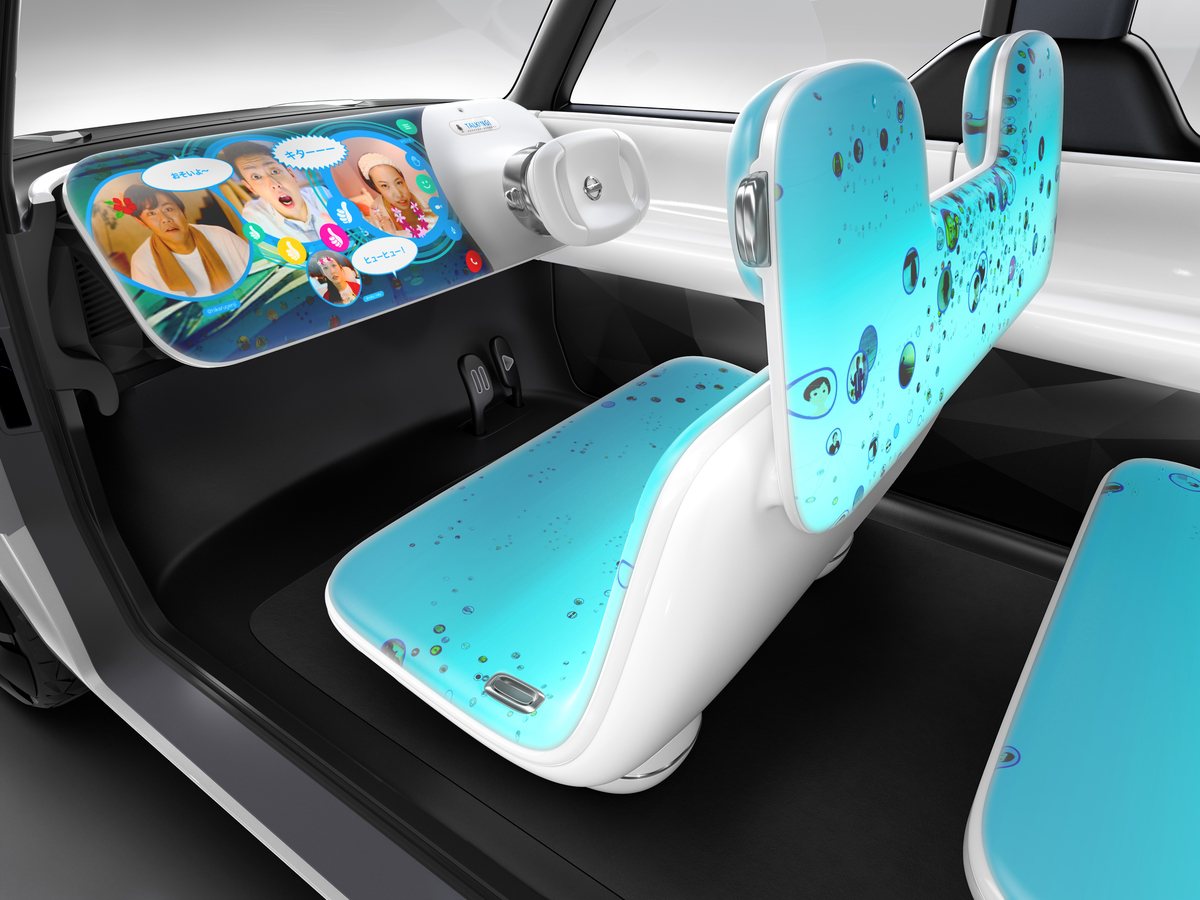 Teatro for Dayz: Real mobile technology for connecting and sharing

YOKOHAMA, Japan – Nissan Motor Co., Ltd. today released an overview of its exhibit at the 44th Tokyo Motor Show, which will be held at Tokyo Big Sight and open to the public from October 30 through November 8. Among the exhibits will be Teatro for Dayz, an innovative concept that signals a new direction in mobile technology. Designed especially for the digital native generation, this vision of near-future vehicles departs from convention and marks a shift in perception.

What kind of car will it take to excite the digital native generation? And how is Nissan designing such a vehicle today?

Step 2: Understand that what moves kids today is not what moved their parents

Step 3: Be open to a new definition of mobility

Teatro for Dayz is a combination of mobile technologies unlike any previously imagined in a car. Combined with Nissan's EV technology, this car represents a radical new way of thinking about how vehicles can be used.

Call it a vehicle. Call it a hi-tech device. Call it the lifestyle driver of the future.

But the generation that went straight from the cradle to the Internet and on to an ever-expanding universe of mobile devices holds different values.

According to Nissan's Product Planning General Manager Hidemi Sasaki, "The generation now getting their first driver's licenses has always been connected through digital devices, email, social media and so forth. What moves these digital natives is capturing experiences in photos and videos and sharing them. Friends respond with `likes' and share the experience further. What's important is not whether something is experienced personally or virtually. What matters is the process of sharing."

Sasaki calls this generation "share natives." For share natives, excitement comes not from ownership of material objects, but from using things to connect with friends and share enjoyment.

For share natives, cars exist outside the orbit of connected life. Many of them describe driving as stressful because they can only share their current experience with the other people in the car. Sasaki says: "What share natives want from cars is not the joy of driving or their own private space, but a better way to connect with friends and share experiences."

Through repeated sampling of next-generation customers, Nissan began to form a symbolic picture of share natives.

Friends dressing in costumes and going out together...Taking pictures of the experience and sharing them...Playing games, connected to countless friends in a virtual world no matter where you are...Changing smartphone wallpaper on a whim...Online parties where the faces of social media friends appear.

Sasaki says that Nissan has identified some common car interests among share natives. "First, they tend to look beyond the car's basic role of transportation. They want a car to be a versatile tool for creativity like a smartphone. This is different from customizing a car. It is more like the ability to modify a car to meet their mood at that moment. Share natives will use cars in ways we would never imagine. So we thought from the perspective of designing a car that would serve as a canvas for their inspiration."

Nissan's research indicated that minicars will be the vehicle of choice for share natives. "In addition to being compact, minicars remind them of the handy mobile devices they carry in their pockets," says Sasaki. EV technology is a must for this generation. "Share natives are already accustomed to recharging their devices at home, so EVs fit their lifestyles far better than cars that require regular visits to a gas station." With a driving range ample for short commutes, Teatro for Dayz can serve as a giant mobile battery, which can be used anywhere to recharge mobile devices.

Bringing together observations of share natives' interests and lifestyles with Nissan's technological strengths in EV technology and insights into how the future of car technology will unfold led to the development of the first car for the next generation of drivers: Teatro for Dayz.

From concept to interior and exterior design, Teatro for Dayz is simple: a clean canvas. When the car is in drive mode, meters, controls and maps appear on a pure white instrument panel. When parked, Teatro for Dayz transforms into an entirely new device. The entire interior, starting with the instrument panel, becomes a live display for a generation wired for connectivity.

Teatro derives from the Italian word for theater. It is easy to picture share natives making Teatro for Dayz the center of an impromptu outdoor festival, or embarking on serious new-generation gaming fun complete with top-quality sound.

Share natives could change Teatro for Dayz's interior design, matching the look to the season, the weather, or simply the vibe of the day. Some might choose to share a dreamy scene with close friends far away. Others might decorate for an online party and share the moment with friends.

Teatro for Dayz's plain exterior, too, serves as a canvas for ideas. It's outfitted with LED screens that enable further self-expression. Any experience in or around the car can be shared instantly via an onboard camera. All the while, the EV battery keeps smartphones and other devices juiced up.

Teatro for Dayz's user interface is based on freedom. When the car is not in drive mode, all the driver sees is a steering wheel, an accelerator and brake pedals. As information illuminates on the white instrument panel, the driver can freely adjust the size and position of the meters, gauges and car navigation information on the instrument screen. Unnecessary information can be hidden.

The solid white interior suggests infinite possibilities for display. As technology evolves and share natives contribute ideas through feedback, the variety of ways the interior could serve as a digital native theater will expand.

Teatro for Dayz will start a new conversation about the function of vehicles. We invite you to experience it at Tokyo Motor Show 2015.