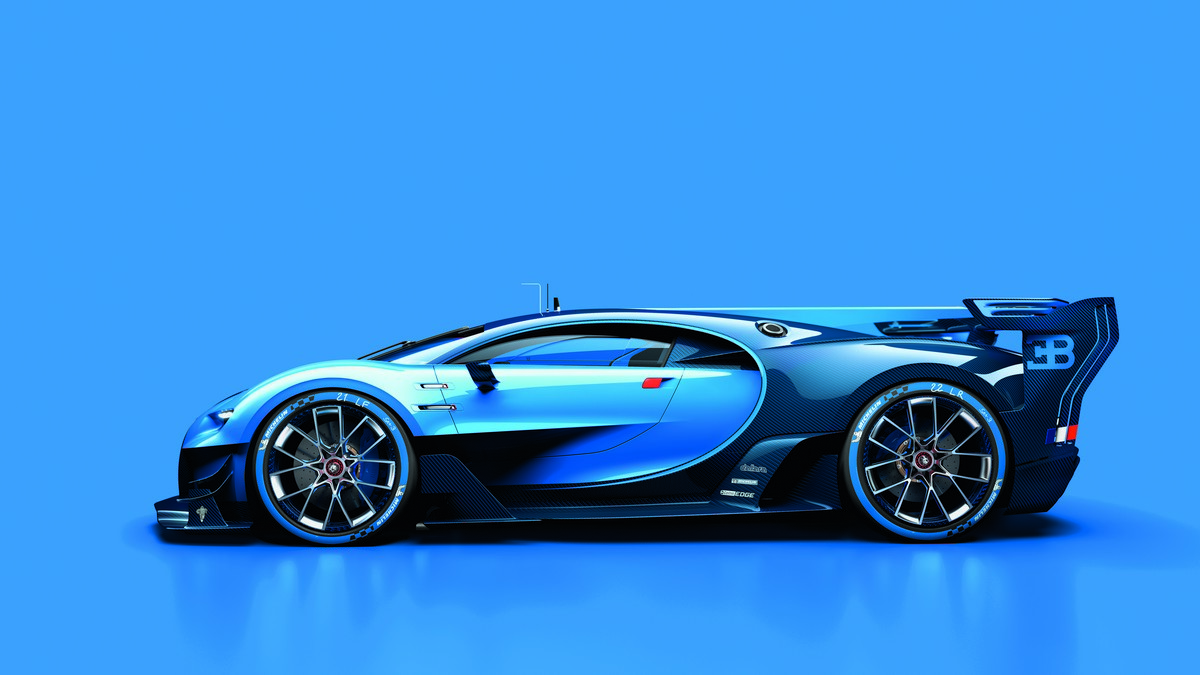 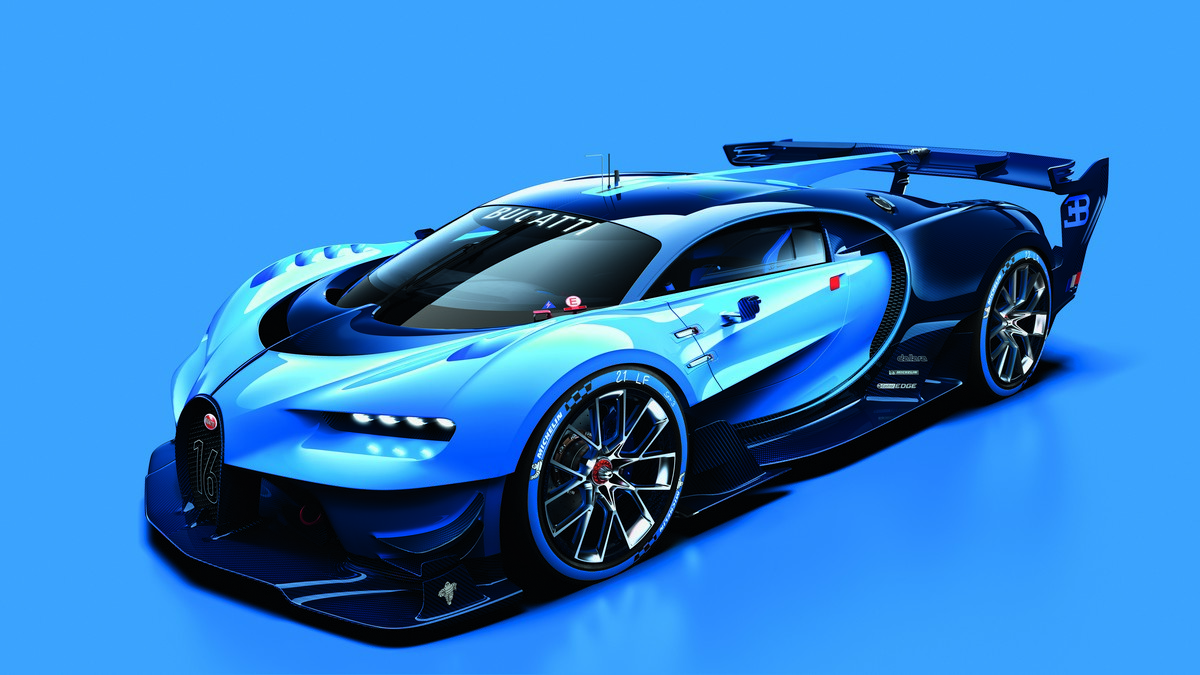 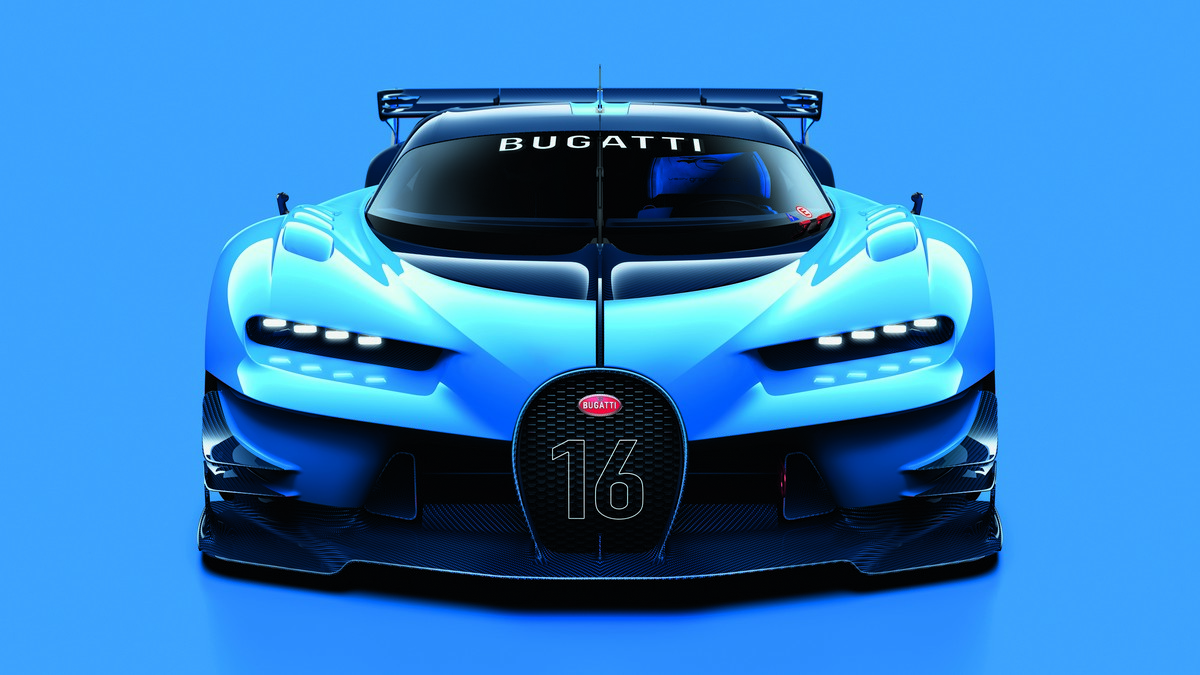 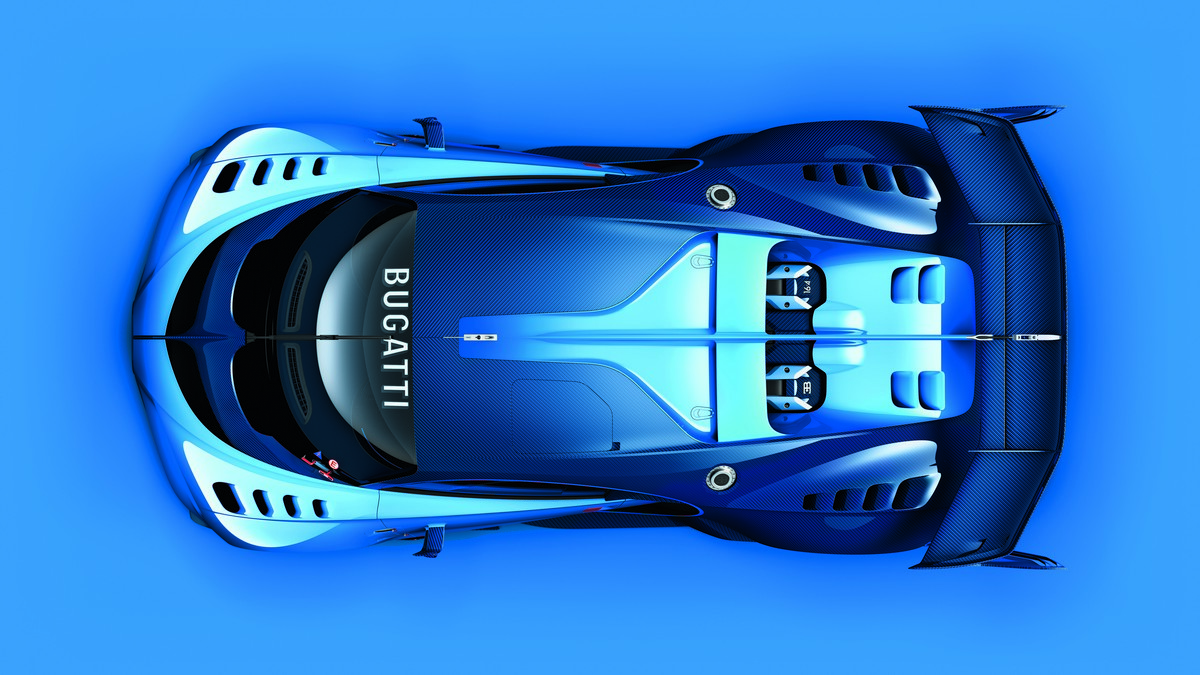 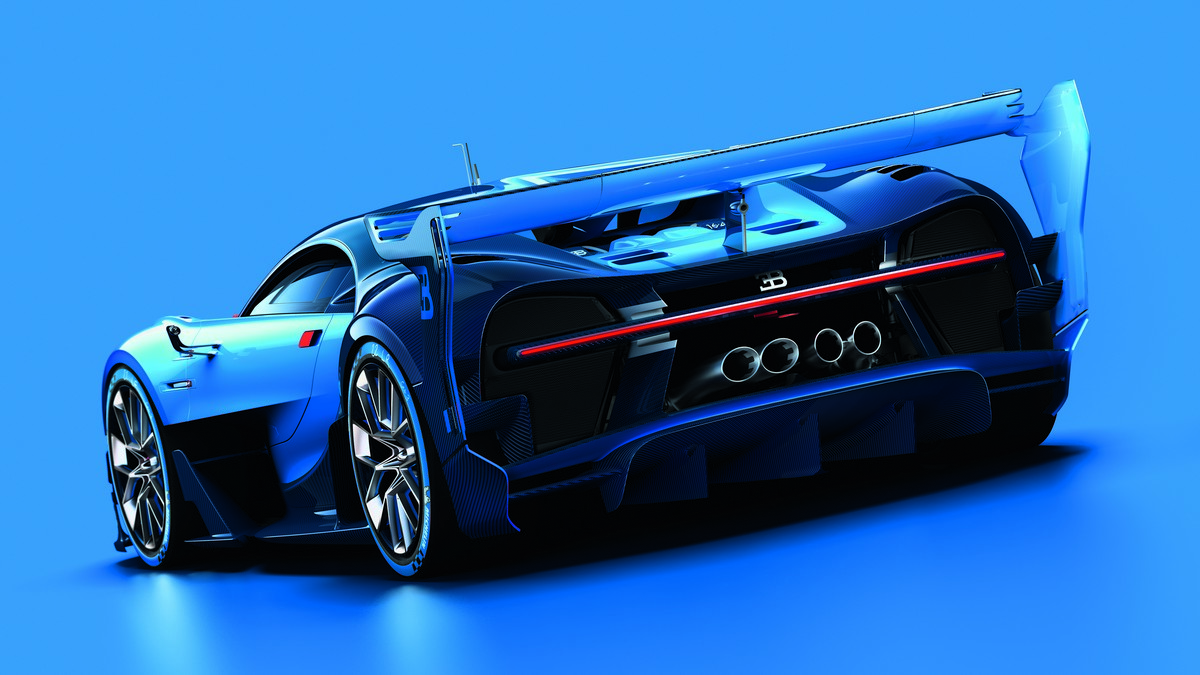 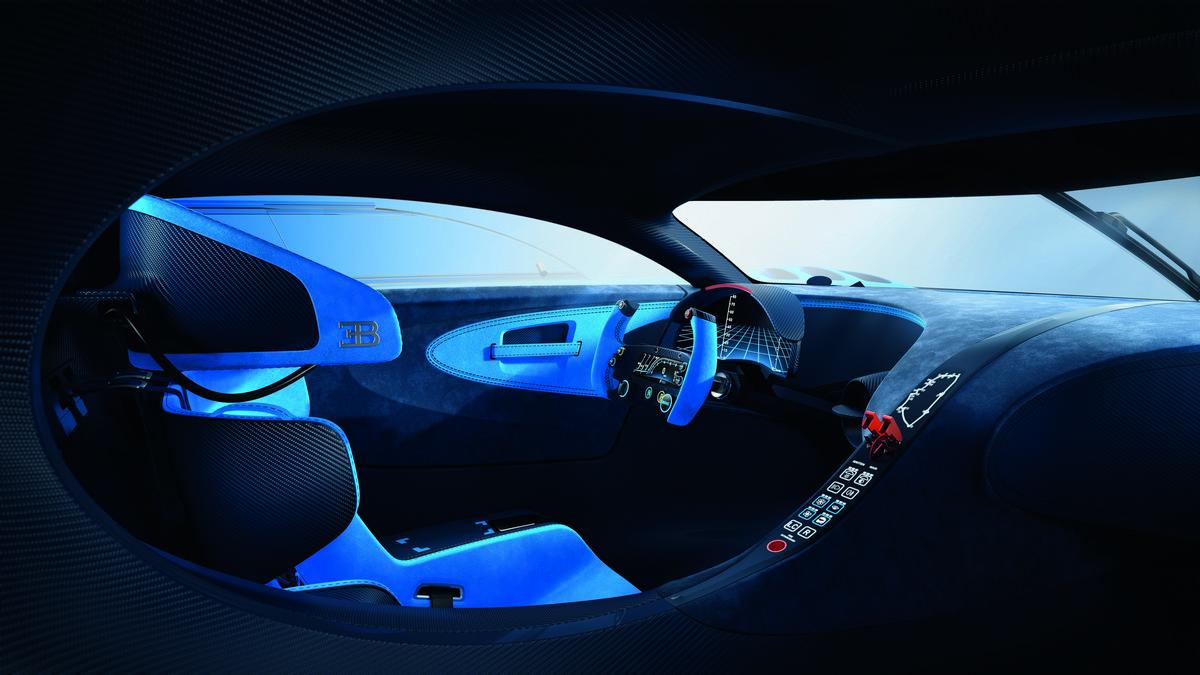 “This is for the fans: Bugatti Vision Gran Turismo” – Show car coming to Frankfurt Motor Show as world premiere

Specifically for the motor show, Bugatti has transformed a virtual project into tangible reality. For the French super sports car brand will be presenting its virtual concept Bugatti Vision Gran Turismo, which it developed in cooperation with Polyphony Digital Inc., creator of the Gran Turismo video game franchise, as a real show car. Now Bugatti has published the first digital renderings of the car. The design of the virtual race car is celebrating Bugatti’s racing history and is based on state-of-the-art motor sport technology. The project is the brand’s tribute to its great racing tradition of the 1920s and 1930s and its victories in Le Mans 24-hour races.

“The Bugatti design team normally works only for the exclusive and very distinguished circle of the brand’s customers. Now Bugatti Vision Gran Turismo has given us the opportunity, for the first time, to do something special for our fans as well,” explained Achim Anscheidt, the head of Bugatti Design. “When the target group suddenly grows from 450 Veyron owners to several million fans, gamers and high performance aficionados, it is a very exciting matter. We had a lot of fun with this project.”

The designers drew their inspiration from the brand’s successful racing tradition. Bugatti enjoyed great success in racing in the 1920s and 1930s. The historical theme for the design of the Vision Gran Turismo virtual modern race car was, in particular, the Bugatti Type 57 Tank and its victories in the 24-hour Le Mans race in 1937 and 1939. Consequently, the Bugatti Vision Gran Turismo makes its appearance in the classic blue two-tone finish of the Type 57 G Tank, the winning car in 1937, simultaneously evoking the colours of the historical French race cars of that period. Since then, blue has also been Bugatti’s brand colour.

Although the Bugatti Vision Gran Turismo will be racing in a class in which the cars generally have little or no relationship to real road vehicles, and their designs therefore are far more extreme and performance-oriented than that of a street-legal car, two things were important to

the design team: First, the virtual car should look unmistakably like a Bugatti and completely embody the brand values of ‘Art, Forme, Technique’, and second, every part of the vehicle should have a real function. Consequently, the virtual race car was developed in close cooperation with the Bugatti engineers and is based on cutting-edge racing technology and precise aerodynamic analyses.

“In the Bugatti Veyron, we have developed a super sports car which unites two characteristics, the beauty and the beast,” explained Anscheidt. “The Bugatti Vision Gran Turismo embodies the performance beast. It has a more radical and extreme style. This is a thorough-bred Bugatti for the virtual race track, not for the street.”

“Under no circumstances did we want to create a retro-style race car in memory of the successes in Le Mans, but rather to transfer the feeling and mood of these special moments in Bugatti’s history to a modern vehicle,” said Sasha Selipanov, the Head of Exterior Design Creative Development. “As an acknowledged Gran Turismo fan, it is a great adventure for me to bring a brand which was once so successful in racing back to the virtual track.”

“We are taking Bugatti back to its roots,” he added. The Bugatti Vision Gran Turismo’s expressive form language is dominated by large convex surfaces in contrast to concave transitions and strong lines. This lends the vehicle styling precision and surface tensions of the highest quality. The proportions of the car are uncompromisingly athletic and shaped to meet the car’s performance goals.

The designers have unmistakably transferred the most important characteristics of Bugatti’s design DNA into the styling of the virtual race car. Consequently, the side view of the Bugatti Vision Gran Turismo is characterised by the famous Bugatti line. And the virtual race car has also been furnished with the most recognisable symbol of a Bugatti, the horse shoe on the front grille. It is placed in the centre of the central front air intake as three-dimensional sculpture and supports the structure between the wings and the aerodynamic front splitter. The horse shoe is flanked by the eight-eyed headlights, which were developed especially for the Bugatti Vision Gran Turismo.

Another typical Bugatti design element is the centre fin, which originated on the legendary Type 57 Atlantic from 1936. The designers employ two versions of the fin on the Bugatti Vision Gran Turismo: one on the front and rear wings, where they contribute to the appearance of the vehicle and the other running the length of the roof, where it makes an important contribution to the car’s dynamic stability.

An interesting detail on the roof is the NACA air intake, which, with its contrasting light blue finish, not only has a strikingly beautiful shape but also makes a crucial contribution to the control of the aerodynamic conditions on top of and at the rear of the car without compromising the effectiveness of the impressive rear wing.

The car has a strong trailing edge which provides great longitudinal-dynamic stability, exhausts the hot air from the engine compartment and, no less important, communicates to the pursuer in the video game that a Bugatti is getting away from him.

“We wanted to create a project as realistic as possible for our fans and put a real Bugatti in the virtual world of the PlayStation video game franchise,” explained Frank Heyl, the head of Exterior Design for Production Development at Bugatti. “Every design characteristic is defined by its function. Bugatti Vision Gran Turismo is the perfect symbiosis of engineering and aesthetics.”

Just as in the exterior design, no concessions were made in the design of the car’s interior. “This is an uncompromising race car,” emphasised Etienne Salome, the head of Interior Design at Bugatti. The interior is designed to meet racing requirements. All indicators, displays and controls are located where a race-car driver expects them – easy to read and easy to reach.

“We wanted to develop a virtual race car for our fans which is a genuine Bugatti down to the last detail and radiates the unrestricted values of the brand,” the designers said. “We hope that the gamers will have just as much fun racing the car as we did in developing it.”

The Bugatti Vision Gran Turismo show car will be displayed from 17–27 September 2015 at the Bugatti exhibit in hall 3.0 of the IAA grounds in Frankfurt am Main.