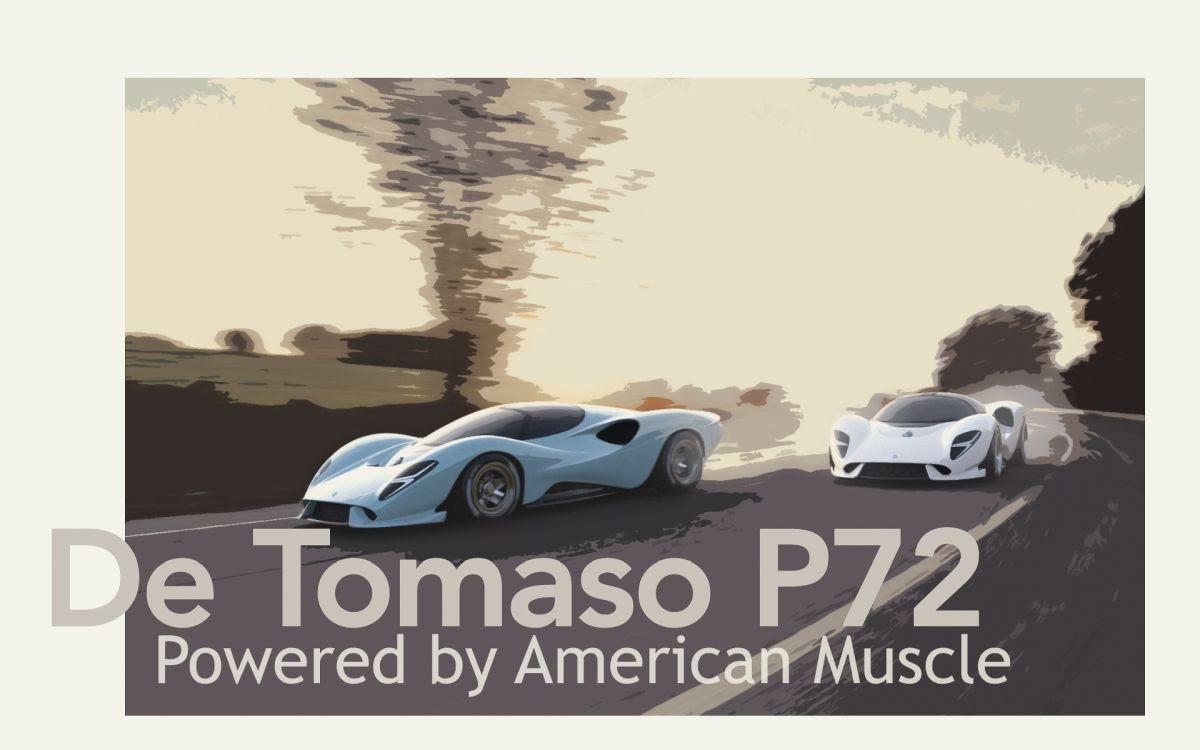 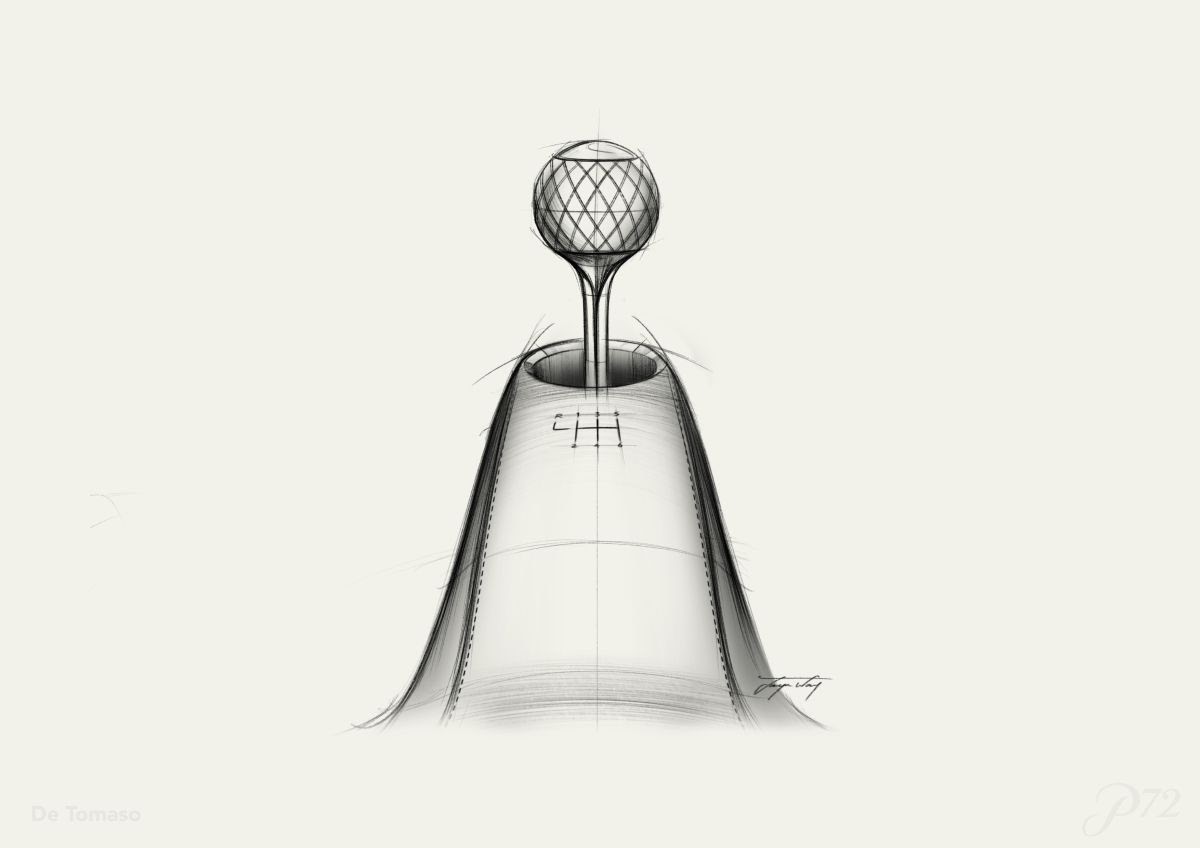 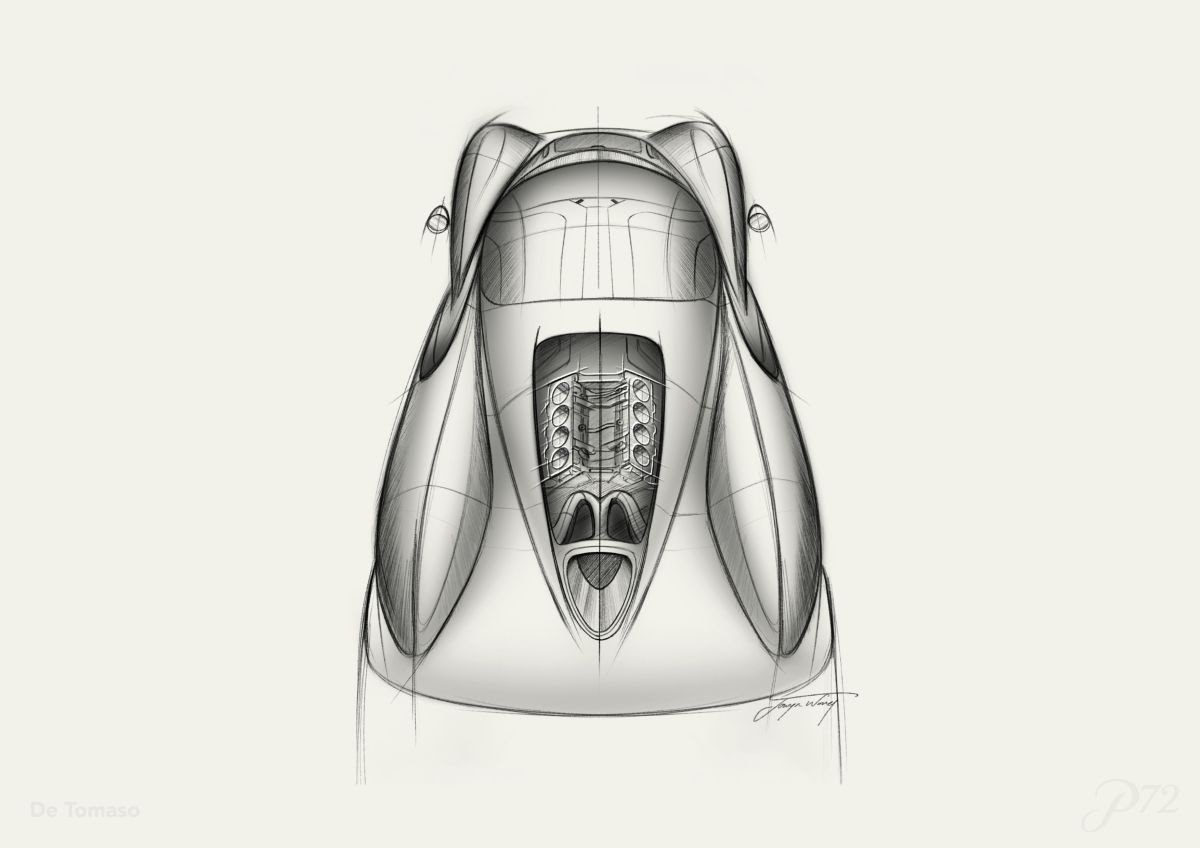 The De Tomaso P72 - Powered with a Heart from America

- Powertrain retains the spirit and DNA of the De Tomaso brand.

- The P72 not only pays homage to the design and spirit of the original De Tomaso - Shelby P70, but also shares a similar heart.

- Roush has been involved with the development of world-class powertrains such as the V8 featured in the 2005 Ford GT and the V6 in the 2017 Ford GT.

- Power targeted to be around 700+ bhp with over 825 Nm of available torque on 91 octane fuel. Maximum engine revolutions are anticipated to be in excess of 7,500 rpm.

- A world-class engine that provides a unique soundtrack reminiscent of the days of old.

- Provides a refined experience for the user in the spirit of its grand touring nature.

- Features a tested and proven foundation ensuring reliability for the brand and owners.

- Powertrain programme being benchmarked, tested and validated for emissions compliance and durability for U.S. and European markets.

As the development program of our De Tomaso  P72 progresses the time is right to reveal  some previously unreleased technical information of the P72 powertrain. Prior to doing so, we want to comment on the important reason for not disclosing the powertrain nor performance figures at the time of launch. Reason being is that it is completely irrelevant to the ethos of this project and what we are trying to achieve.

“In our opinion the market is now over-saturated with commercially driven “limited edition” models primarily marketed on performance metrics.  We have grown tired of this notion and  thus took a contrarian approach with the P72.  A stark contrast in almost every aspect of  today’s market, the P72 is a true ‘Modern-Day Time Machine.’ A car that has been oversubscribed without revealing any performance figures, nor disclosing the engine as the   P72 owners and enthusiasts realize the historical significance of this program and therefore have disproved the notion that one needs to produce the fastest or most powerful car on earth to garner interest. We focus on the provenance and the overall experience as a brand and for our clients,” — Ryan Berris, De Tomaso General Manager and CMO.

The P72: A Heart from America

The P72 not only pays homage to the design language and spirit of the original De Tomaso - Shelby P70, but also shares a similar heart.

A storied history in powertrain development is an integral part of the De Tomaso heritage. For the P72 we proudly continue this tradition. During the early days of our revival  and  development program we held discussions with various parties across Europe and the U.S. as we weighed our decision for the future. For us the decision was clear, as the essence of our revival strategy and purpose for acquiring the brand was to not only tell the untold history of   the marque, but to stay true to the core pillars upon which De Tomaso was founded and this resulted in us deriving the P72’s heart from America. Ford derived powertrains have been part  of the De Tomaso DNA from the beginning.

A Remembrance from the Past

Alejandro de Tomaso’s road-car powertrain relation with Ford first started in 1963, when he developed his first road-car, the Vallelunga. The Vallelunga (1963-1968) was a mid-engined grand-tourer that featured a four-cylinder Ford Cortina engine. After the  Vallelunga,  De  Tomaso collaborated with Carroll Shelby on the P70 which featured a Ford V8, then came the Mangusta (1966-1971), the Pantera (1970-1993) , the Deauville (1971-1985), the Longchamp (1972-1986) and the Guarà (1993-2004) all which featured Ford derived powertrains. In fact, in 1970 Ford acquired a majority equity interest in De Tomaso and held its stake for a period of years.

The P72’s powertrain is the result of a technical collaboration between De Tomaso Automobili and renowned engineering firm; Roush. The P72’s bespoke V8 has been purpose-built by a team of universally acclaimed engineers to satisfy a specific set of performance and regulatory values while retaining the spirit of the 60’s.

"In seeking this important aspect of the program, there were no reservations about forging a technical collaboration with Jack Roush and his company, Roush. Roush has a long list of accolades in the automotive segment and a deep history with Ford. Roush, amongst others,  was involved with the powertrain development of the 2005 Ford GT 550hp supercharged 5.4 liter V8 as well as the 3.5L V6 twin turbo, 647hp 2017 Ford GT powertrain.” — Norman Choi, De Tomaso Chairman.

“We are proud to have formed this strategic technical collaboration with De Tomaso to provide our expertise to the powertrain development and certification processes for homologation. Roush and Roush Performance share a similar passion for racing and desire to drive innovation in both the OEM and motorsports markets.” — Greg White, VP of Roush Powertrain Engineering Group.

The De Tomaso V8 utilizes a proven Ford foundation and in order to achieve the relation we underwent a multi-phase application process with Ford and proudly secured a supply, access to after-sales parts inventory and an OEM homologation base.

We then began our powertrain development program with Roush. This consisted of taking the Roush Performance modified Ford 5.0 liter 90° V8 engine and undergoing an extensive development program, which is still ongoing as it transitions into the final De Tomaso V8. We first defined the values that must be achieved while benchmarking, testing and validating the powertrain for emissions compliance and durability.

As part of the program we have developed a bespoke and emission-compliant Dry-Sump lubrication system to ensure adequate flow under high cornering loads and minimize the vehicles center of gravity. The De Tomaso V8 also features a new state-of-the-art Roush roots- type positive displacement supercharger that utilizes twin four-lobe rotors that are twisted 170- degrees. The fourth lobe and helix angle provides a long list of benefits including: enhanced thermal efficiency, higher volumetric capacity, higher operating speeds, increased efficiency of airflow into the engine and improved noise and vibration characteristics. The supercharger unit has been endured hundreds of hours of dynamometer testing to ensure its industry-leading performance, safety and reliability. To-date the unit has been tested for over 17 million wide- open-throttle cycles all while providing consistent and reliable performance figures.

The supercharger offers a substantial increase in reliable power and also helps retain the character of a naturally aspirated engine. For us this was an important aspect as we do not require nor need 1,000+ bhp, but wanted to achieve a smooth, linear power-curve without detracting from the old-school American V8 soundtrack. In our opinion this  cannot  be  achieved via turbochargers and a hybrid system was out of the question as it goes against the core spirit of the P72. Unlike turbocharging, the De Tomaso supercharged V8 provides instant throttle response and can generate increased power throughout the engine’s  entire  power band.

Although we are still in the midst of development, the final power output will be more than sufficient and is targeted to be around 700+ bhp with over 825 Nm of available torque on 91 octane fuel. Maximum engine revolutions are anticipated to be in excess of 7,500 rpm.

The P72 will be solely offered with our De Tomaso developed 6-speed manual transmission.

In the spirit of our past projects and purist passion for automotive in general the acoustics of   the P72’s powertrain were paramount. It had to invoke emotion for both the user and bystanders. The V8 soundtrack had to be distinctive as the sound of most V8 supercars today has become quite homogenous. We strived for a sound reminiscent of the American Muscle  era of the 60’s all while creating a silky-smooth refinement that exudes an edgy sophistication.

We have worked tirelessly to minimize any independent noise from the supercharger to again provide that naturally aspirated feeling, offering world-class performance while meeting the  strict emission requirements for the U.S. and European markets. Furthermore, we have created a symphonic exhaust system which mates the cross-plane acoustics of our De Tomaso V8 into a specific ‘instrumental’ type arrangement that creates something truly special. The P72’s soundtrack brings one back in time as if they were on the starting grid at Le Mans in 1966; proper.

In the coming months, as our development program continues we will release videos and audio of the P72’s final production soundtrack.