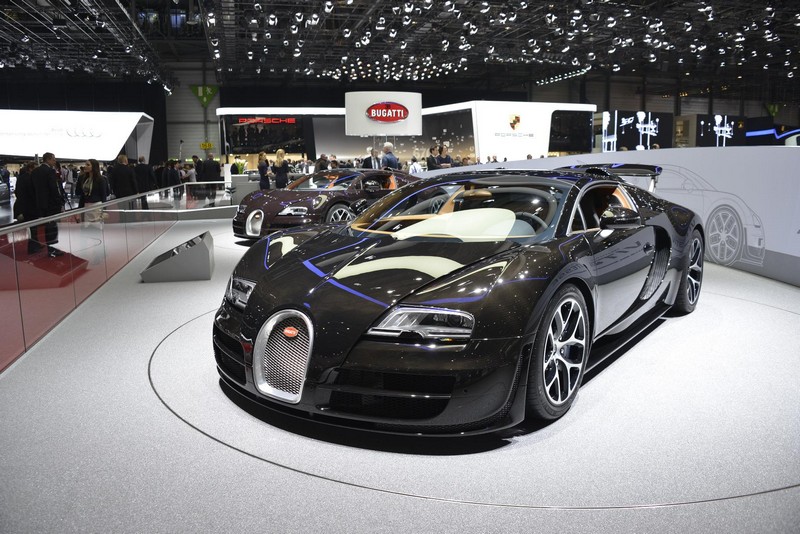 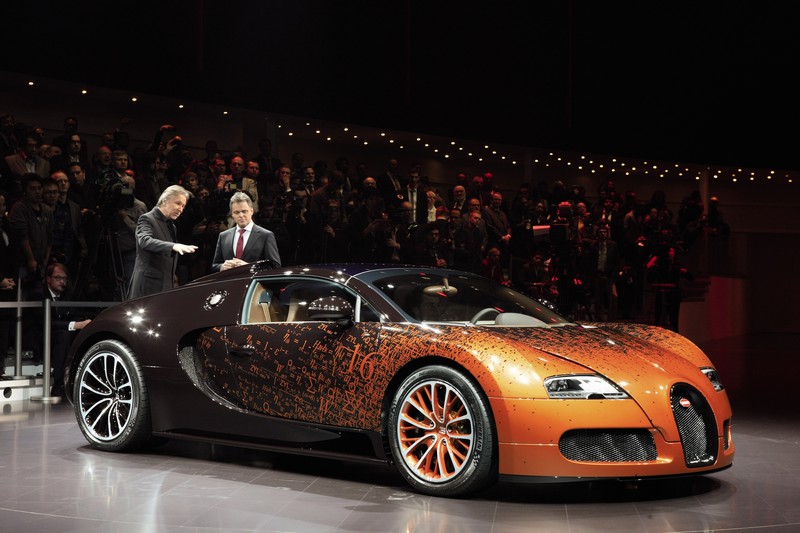 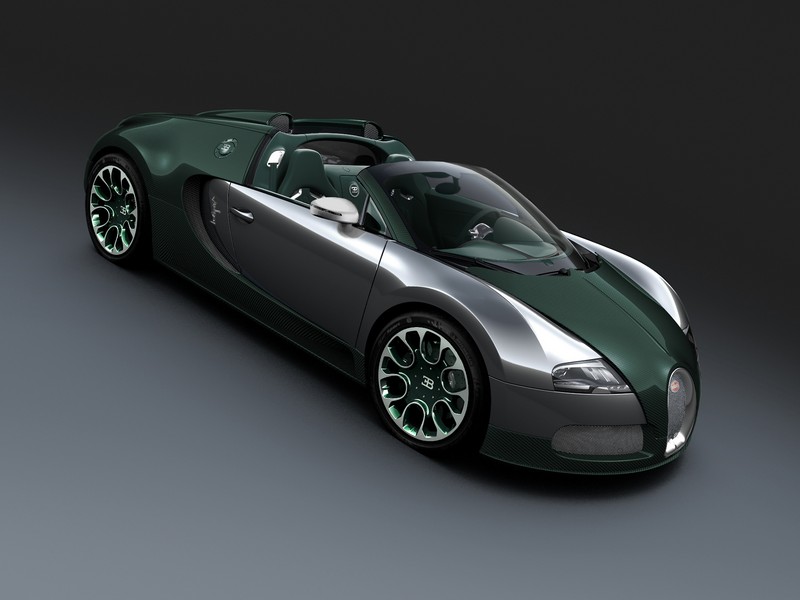 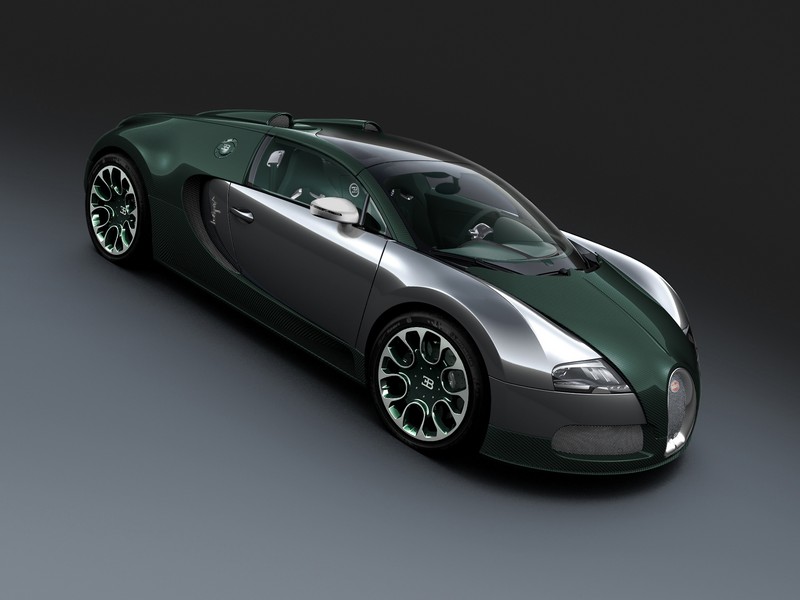 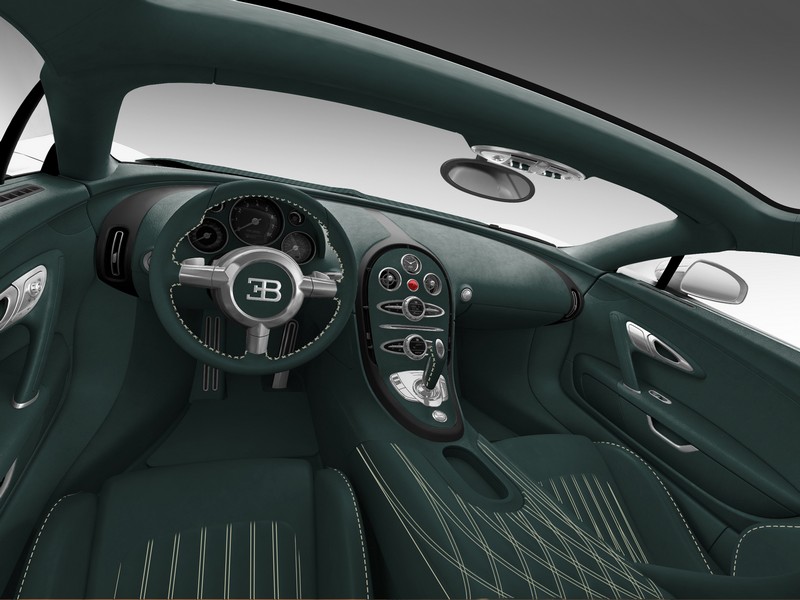 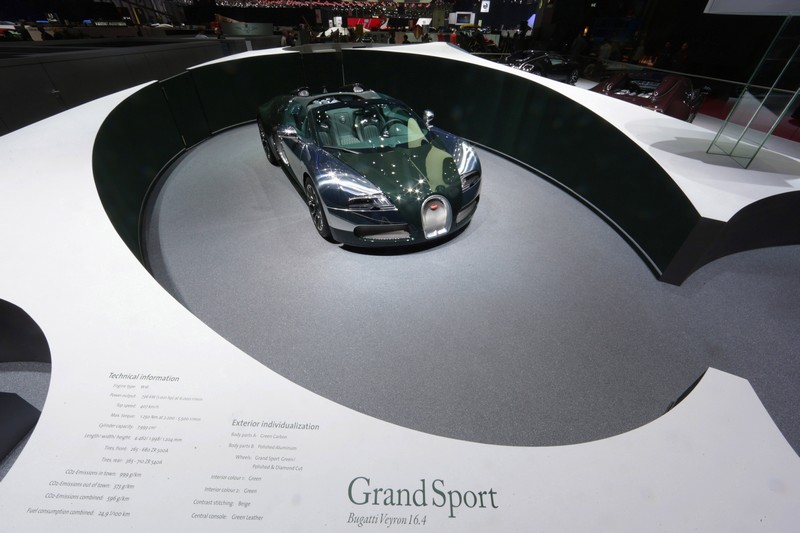 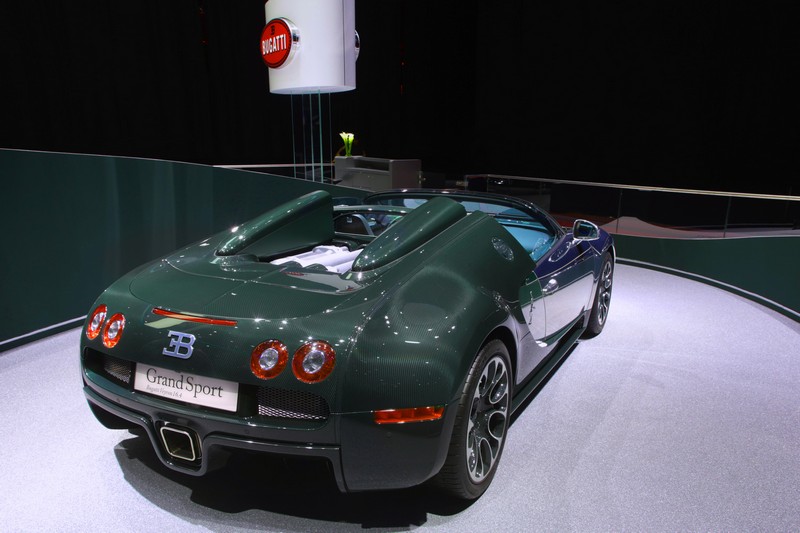 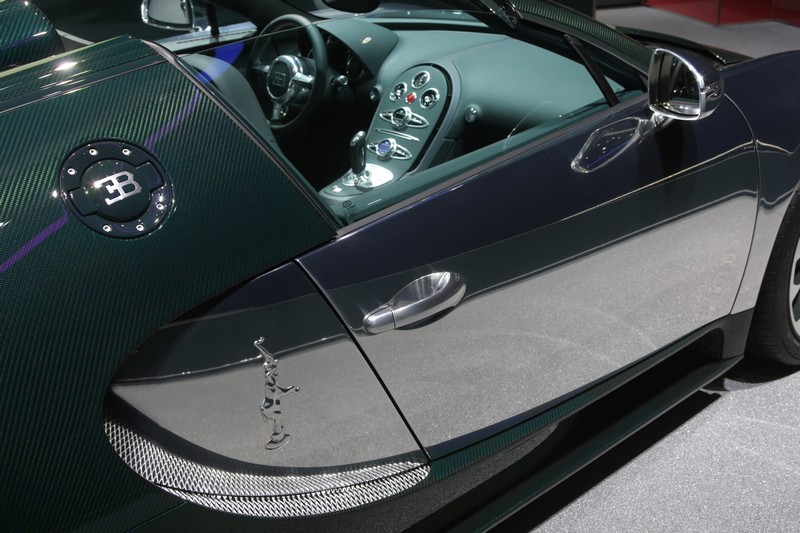 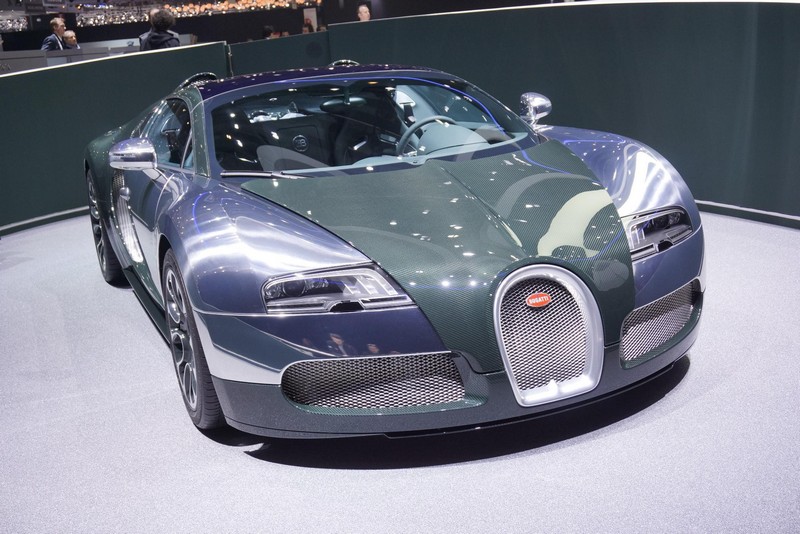 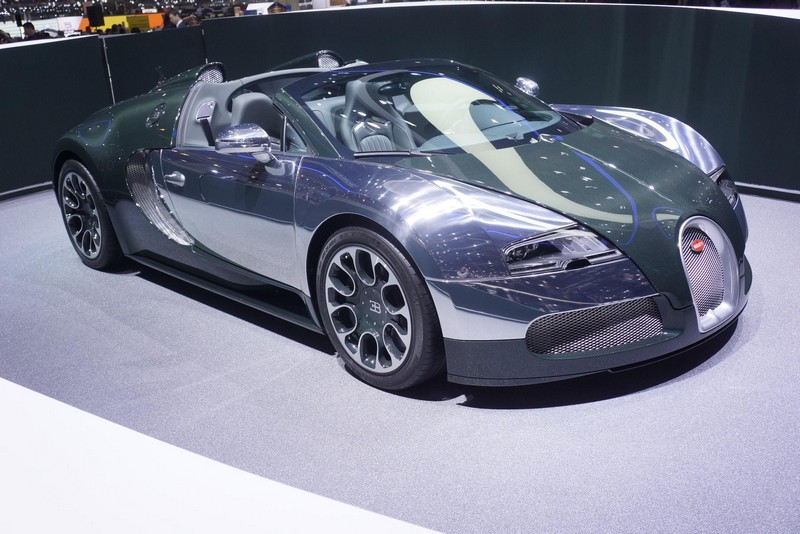 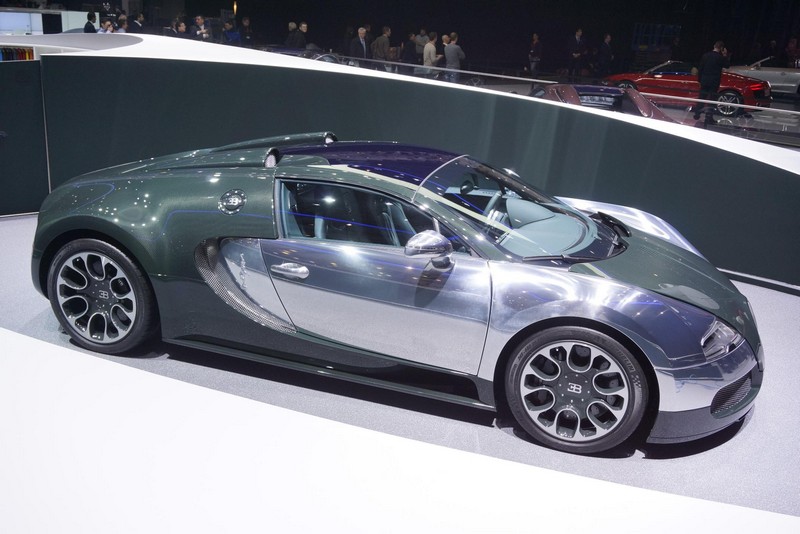 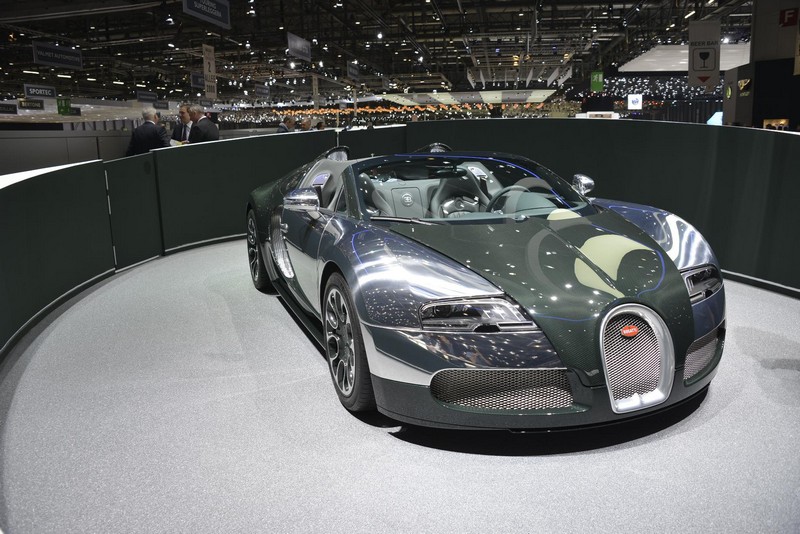 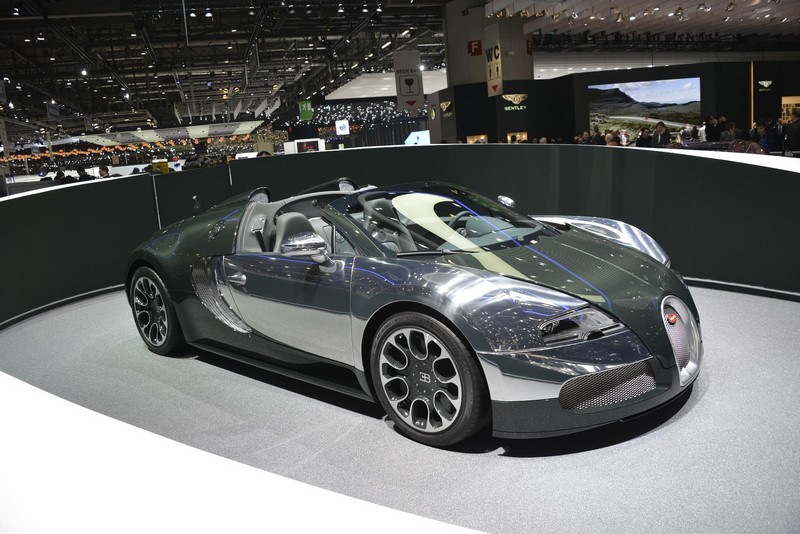 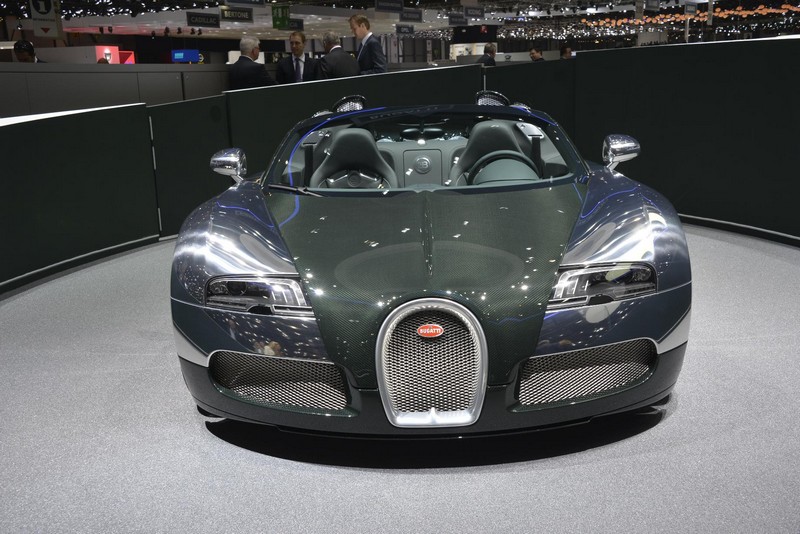 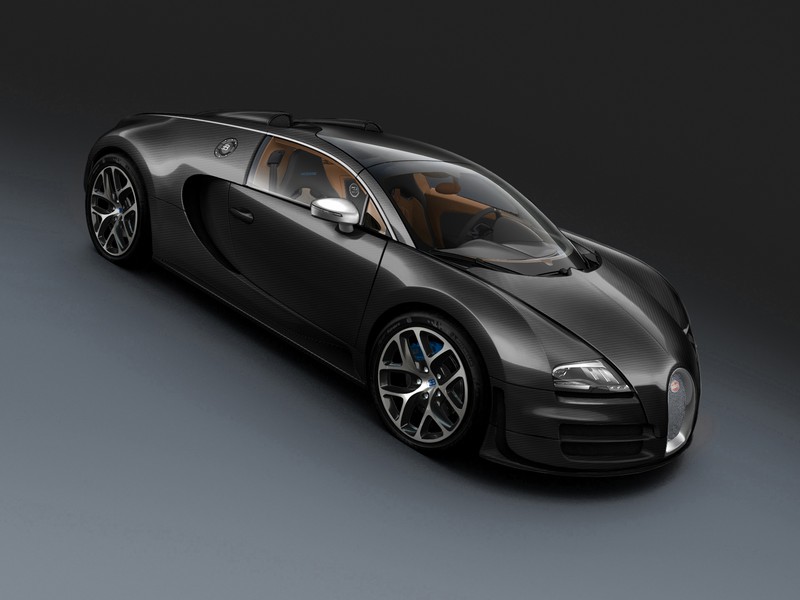 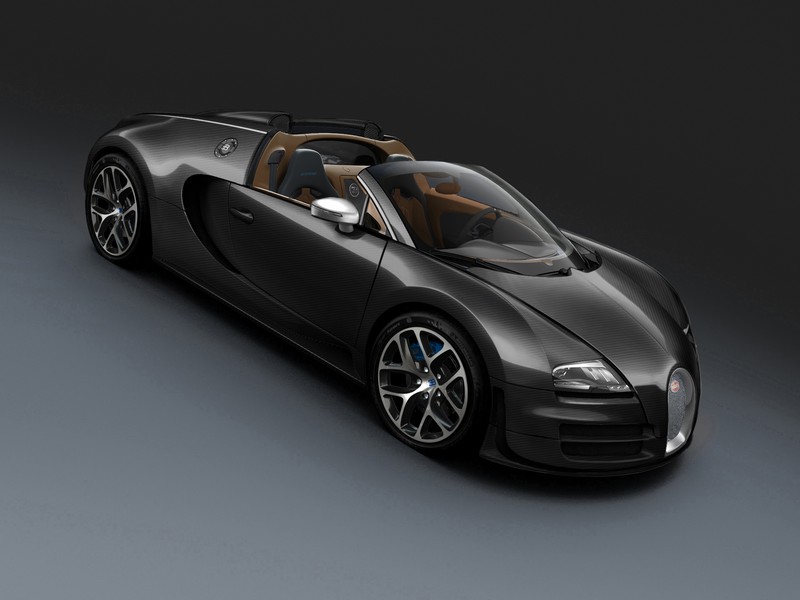 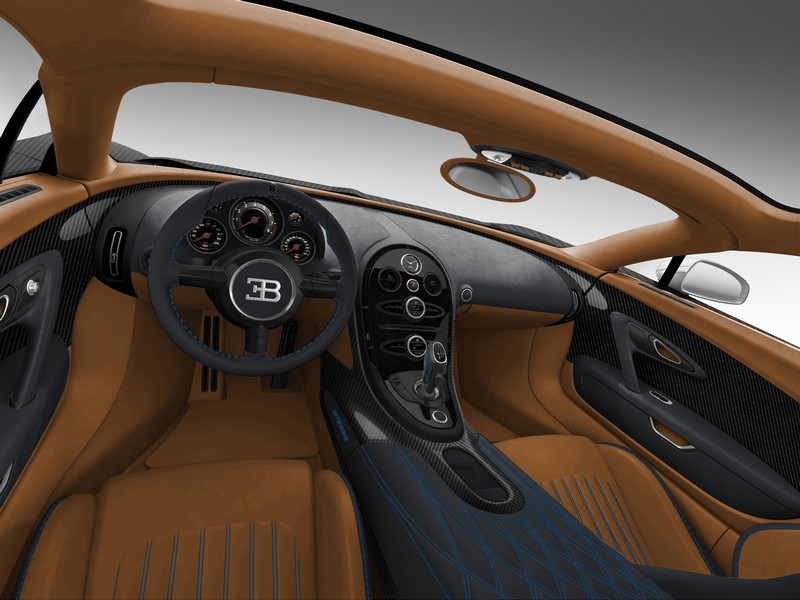 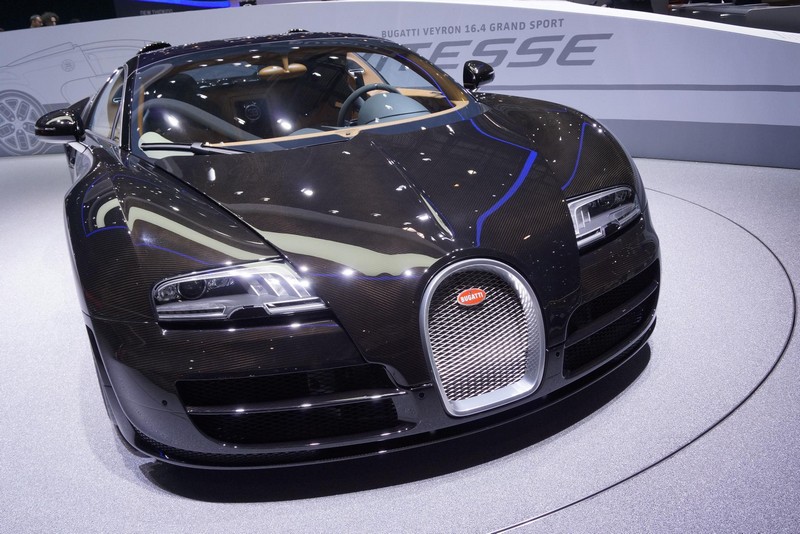 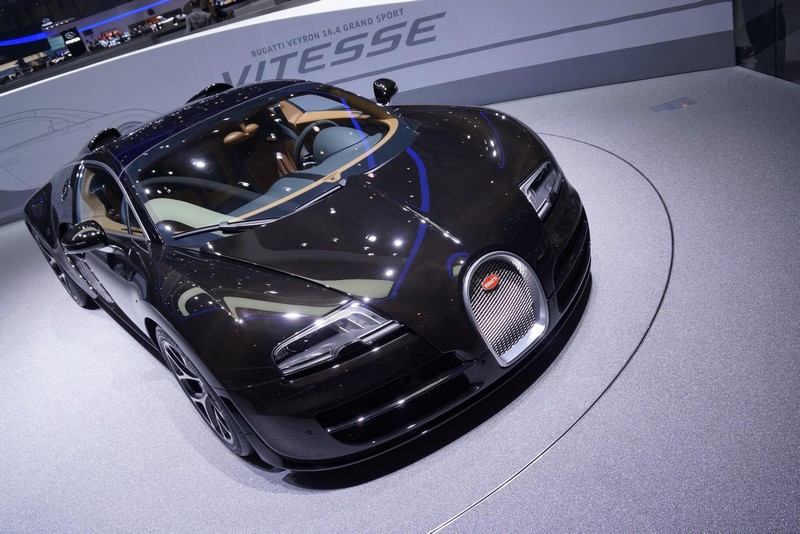 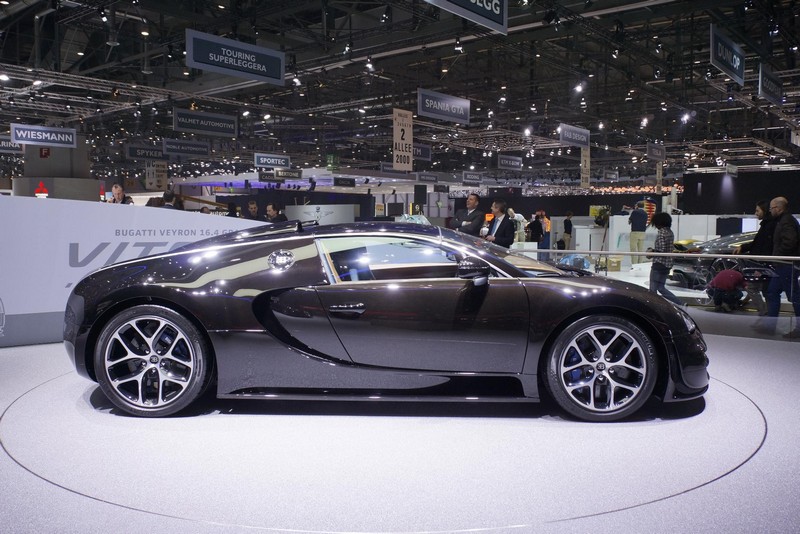 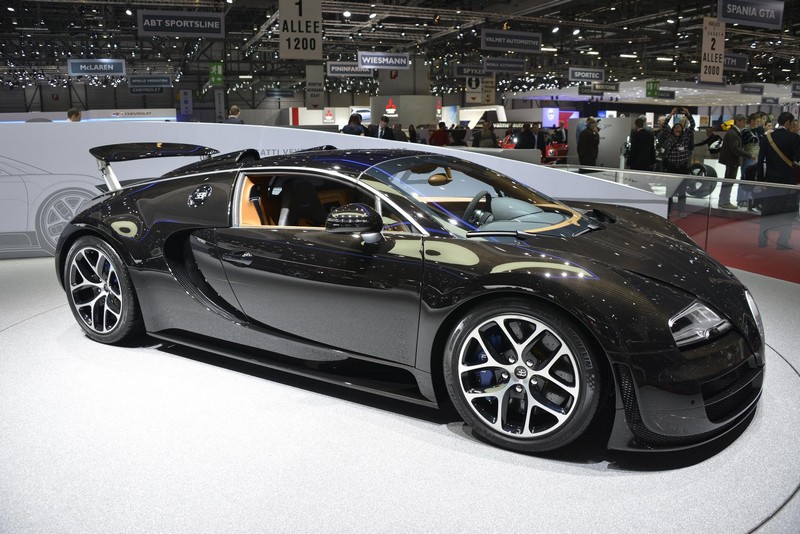 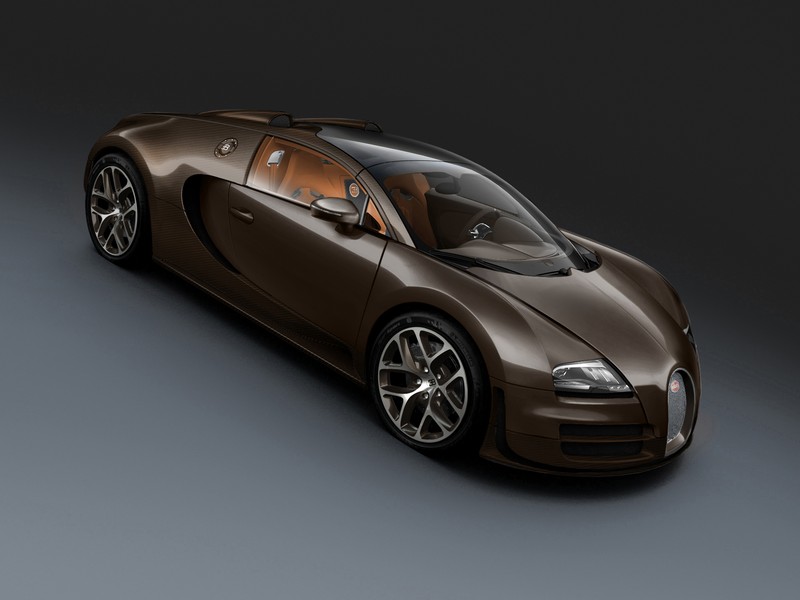 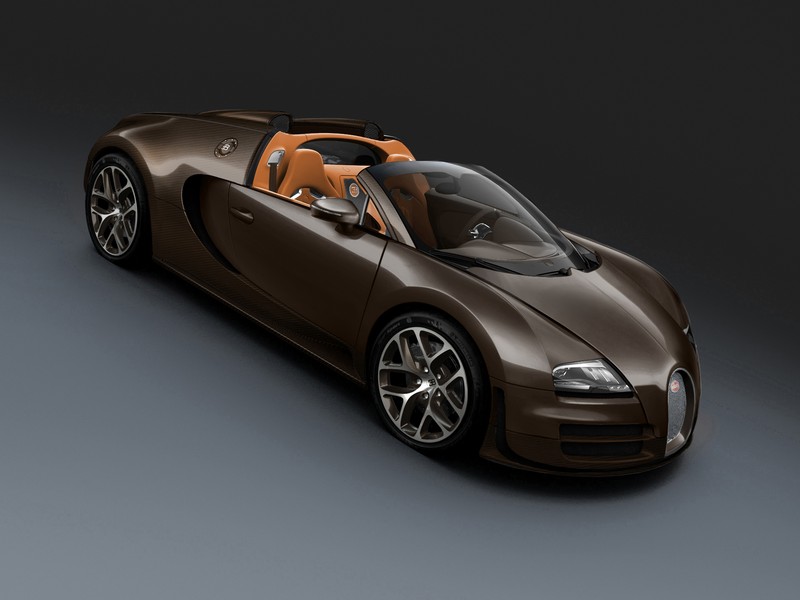 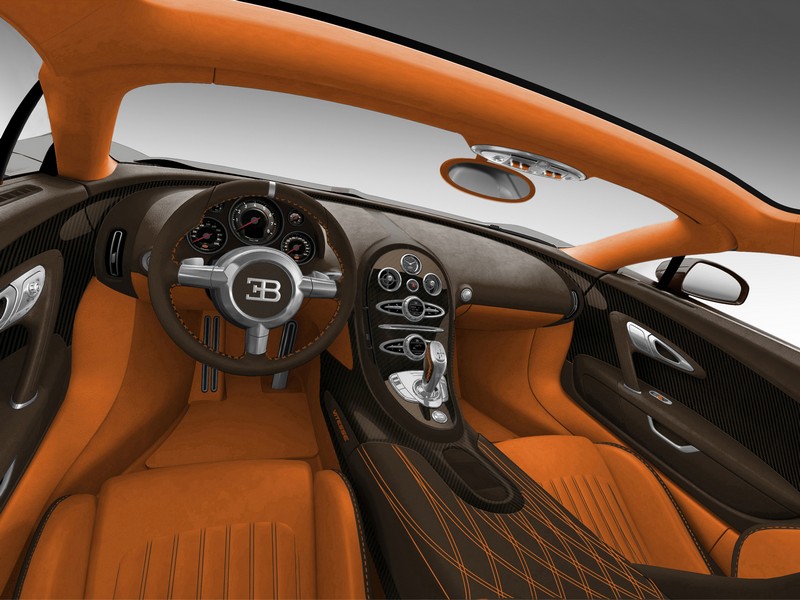 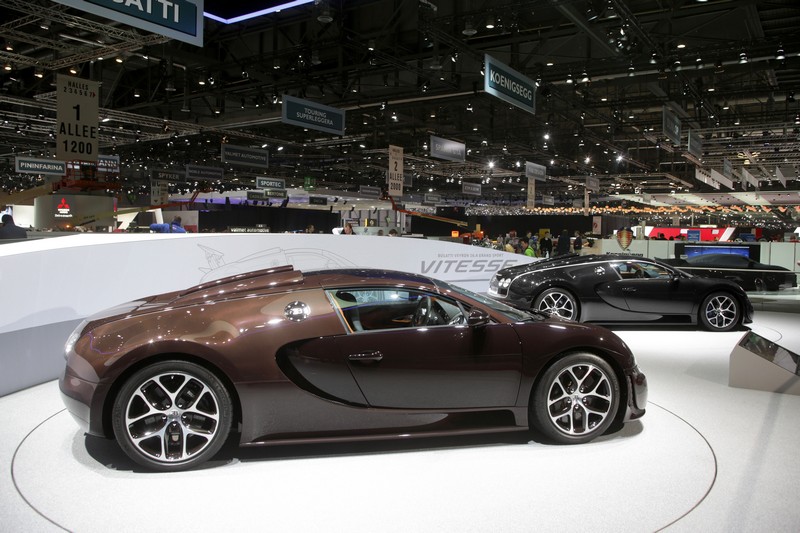 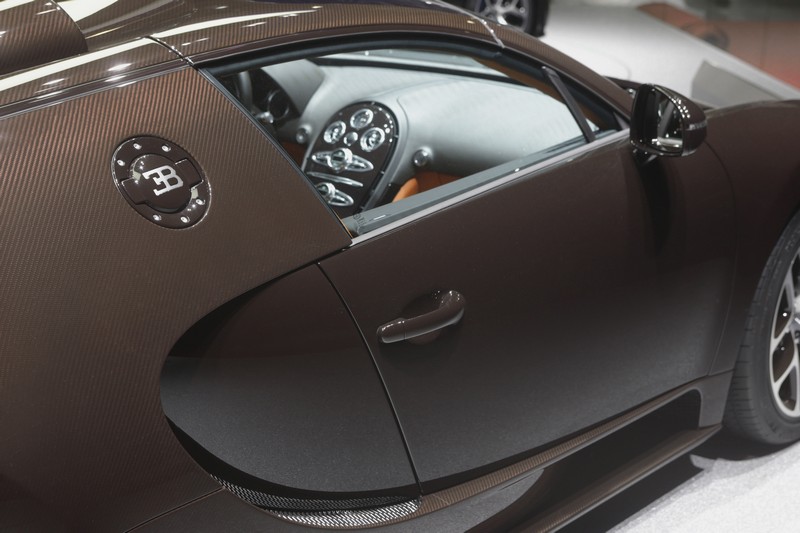 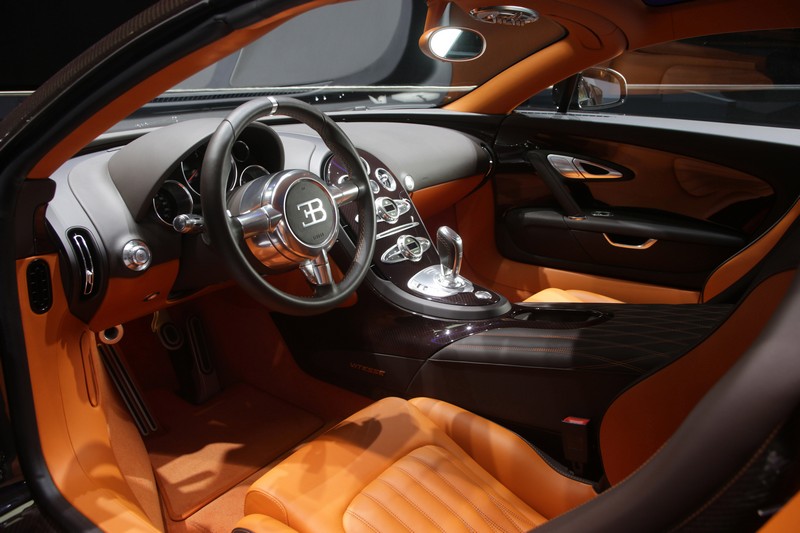 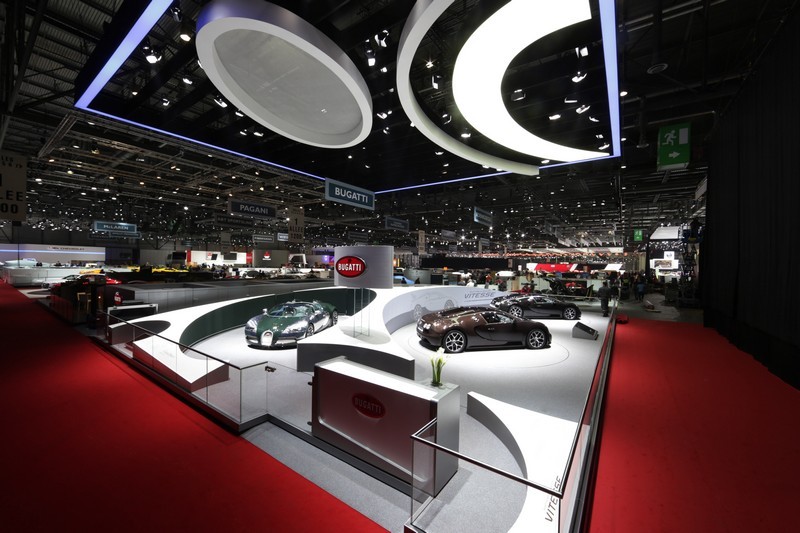 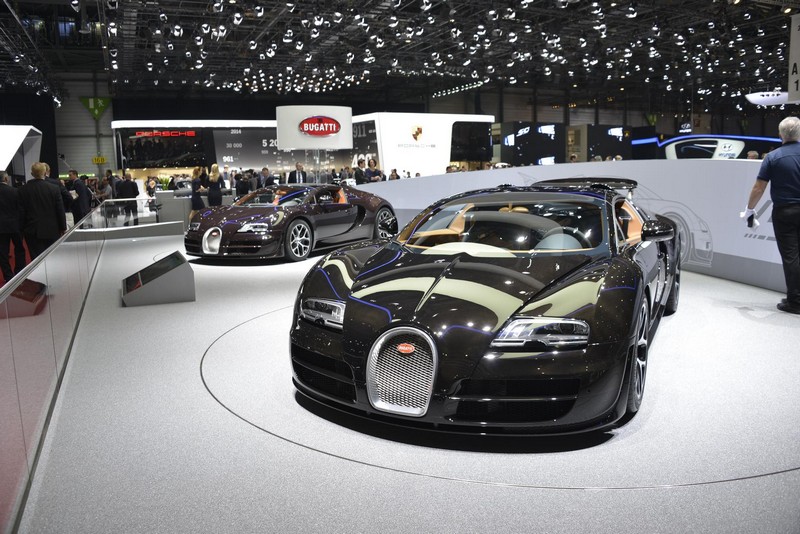 Molsheim/Geneva, March 5, 2013 – Every Bugatti Veyron 16.4 is a work of art on wheels and each is one-of-a-kind, because there are no limits to the customization options offered. This also applies to the three Bugatti models shown at the 2013 Geneva Motor Show (March 5–17). Two Grand Sport Vitesse – at 882 kW/1,200 hp the most powerful Roadster of all time – and a 736 kW/1,001 hp Veyron 16.4 Grand Sport shine with their exclusive visible carbon bodies and variable two tone colour combinations. The two tone interiors in the two Vitesse models demonstrate Bugatti’s attention to detail and high-quality craftsmanship.

Grand Sport exterior. Whether with a puristic full-carbon-fibre skin, an exclusive shimmering visible-carbon shell in bronze or paint finishes – the options for personalizing a Bugatti Veyron 16.4 Grand Sport are limitless. This illustrates the 1,001 hp Bugatti Veyron 16.4 Grand Sport shown at the Palexpo in Geneva. Its complete rear, the engine cowlings, the roof trim strips, the door sills, the lower area of the front apron and the front bonnet on this classic Veyron 16.4 shine in the visualcarbon tone "Green Carbon". Bugatti's manufacturing pièce de la résistance lets the carbon fibres shine through and, depending on the angle of sunlight, can make the colour appear either more subtle or powerful.

The Grand Sport’s doors, front wings and exterior mirror housings are in polished aluminum. And so are the air intakes, while the 20-inch rims of the wheels have a green and silver two-tone Diamond Cut finish. Further exquisite details are the green tank flap with an EB logo as well as the motif of a dancing elephant, embossed in front of the air intake shafts on the body. This is reminiscent of the Art Déco bonnet figure designed by Rembrandt Bugatti and restricted to the six Bugatti Royale built between 1926 and 1933.

Grand Sport interior. The Molsheim-based designers continue the Grand Sport’s exterior green and silver theme in the interior of the vehicle. Green leather is tastefully set against silver contrast seams on the seats, the steering wheel rim and the gear lever. As with the identical pattern in the two Grand Sport Vitesse models, the seats, back- and armrests are sewn with beige stitching called “quilting”. Other details include an interior mirror in a green finish, pedals and sill panel trims in anodized aluminum and green floor mats. This version of the Grand Sport costs 1.92 million euros.

The enlarged air intakes on each side of the Bugatti radiator grill are horizontally separated from one another by a bar. The lower air slit runs back along the side to the wheel housings – giving this superb sports car even more presence. The rear is dominated by a double diffuser and centrally positioned twin tailpipe. Bugatti took the aerodynamics package with automatically retractable rear spoiler straight from the 16.4 Super Sport, which set a new record for a road sports car in summer 2010 by attaining a speed of 431 km/h (268 MPH).

Grand Sport Vitesse I exterior (basic body tone in black). One of the two Grand Sport Vitesses shown in Geneva highlights the vehicle’s enormous potential with a full body out of visible black carbon fibre. To provide a contrast to this puristic concept, the brake calipers and the exterior mirror housings are in blue while the roof trim and the grill are in polished aluminum and the wheels in the traditional Diamond Cut.

Grand Sport Vitesse I interior (basic body tone in black). The interior of the black Grand Sport Vitesse is a striking contrast to the monochrome carbon-fibre exterior with a fantastic combination of Beluga Black and brown Gaucho leather. All other surfaces, including the visible carbon decorative elements, are black.

The contrast inside the car is produced by blue stitching on the cockpit seats, on the three-spoke wheel and on the center tunnel; the "Vitesse" lettering on the head restraints and in the area around the knee pads is stitched in “Bugatti Light Blue.” The generously laid-out visible-carbon parts form a link to the outer skin – they are to be found in the door inserts, in the center console extension, on the iPad stowage surround, on the belt exit point trims on the seats and on a cover carrying the EB logo in the leather back panel trim. The steering wheel has a "12 o'clock mark" finished in visible carbon – homage to racing and rally vehicles in which the driver always needs to be kept informed about the steering wheel angle. Its price is 2.02 million euros.

Grand Sport Vitesse II exterior (basic body tone in bronze). The second Grand Sport Vitesse shows off Bugatti's perfected visible-carbon construction. The Bronze coloured carbon components in the entire rear, on the cowlings, on the roof frame and on the A-pillars shimmer almost golden depending on the angle of light. To contrast, the side panels as far as the rear air intake grilles, the exterior mirrors and the nose are shown in a complementary brown "Fire Finch" tone. Bugatti calls this colour composition "Ying & Yang" – used here for the first time – and it is contrasted only by the highly polished horseshoe grill and the rims (which are in a mixture of Fire Finch and aluminum). The black ventilation grilles and brake calipers are also designed to remain neutral.

Grand Sport Vitesse II interior (basic body tone in bronze). For the interior of the bronzecoloured Grand Sport Vitesse, Bugatti paired an extroverted colour combination of a powerful orange ("Burnt Orange") and a dark brown ("Coffee"). Elements that have a dark colour in the Vitesse sister model are given a polished aluminum finish here. These not only include the steering wheel spokes, steering wheel center and 12 o'clock ring, but also include the door handles, the gear lever as well as all trim frames of the controls and displays on the center console. The contrasting seams vary in colour. While orange seams pervade the Coffee leather center tunnel and the seat valances, brown quilted seams give the orange seat cushions a more mixed look. The carbon-fibre door inserts inlays and on the center tunnel have a bronze tone. The "Vitesse" lettering is in resplendent orange with a coffee-brown background. This Vitesse costs 1.95 million euros.

The knee pads on the center tunnel, an additional 12V connection in the glove box, an illuminated starter and parking lock switch as well as an instrument cluster with shifting information and a power display up to 1,200 hp are among the standard equipment of all Bugatti Veyron 16.4 Grand Sport Vitesse models. Park distance control and the reversing camera integrated into the interior rearview mirror also are standard features on the Vitesse.

The Vitesse's power increase of 199 hp when compared to the 736 kW/1,001 hp Grand Sport is largely thanks to the use of four larger turbochargers with charge air coolers. Furthermore, all the components of the drive train have been comprehensively strengthened. In particular, the teeth of the 7-speed dual clutch gearbox were reworked to ensure that they can transmit the immense power of the engine over the long term. With a top speed of 410 km/h (253 mph), the Grand Sport Vitesse is – like all Veyrons – the fastest Roadster ever built in series. The maximum speed is achieved with special safety precautions and on closed-off stretches of road; in all other cases, the Grand Sport Vitesse is capped electronically at 375 km/h (233 mph). Thanks to the large turbines and reduced exhaust counter pressure, fuel consumption could be reduced by around four percent despite the increase in power.

Up to 1.4 g when cornering. When cornering, the Grand Sport Vitesse achieves lateral acceleration forces of up to 1.4 g. All the same, this does not make it an uncompromising racing car; it can still be driven easily by any driver with sporty ambitions - an exceptional sports car for any roads.

In order to transmit the enormous power of the Vitesse to the road safely and confidently, the engineers increased the main spring rates slightly and adopted the stabilizer bars of the Super Sport.

Thanks to its extremely quick-reacting shock absorbers, adapted from motor racing, the Grand Sport Vitesse is even easier to control and perfectly balanced. You will no longer feel pitching or a tendency to roll during heavy acceleration and braking; optimized wheel load fluctuations have almost completely eliminated disconcerting understeering. The precise interaction of tires placed on 20-inch light-alloy wheels with an intelligent all-wheel system and a newly tuned electronic stabilization control, which is designed to intervene later, gives the Grand Sport Vitesse an even wider limit range than before. Bugatti adapted the cooling of the brake system to add to the performance – a brake system that is unique in the world when it comes to stability and braking force thanks to carbon-ceramic discs.

Outer skin and structure made of carbon. A new fibre structure for the generally standard fullcarbon monocoque guarantees even better torsional stiffness in the Grand Sport Vitesse while also maximizing safety and reducing weight. The outer skin is also made entirely of carbon fibre – on request, it can also be delivered with clear-coated visible carbon, as in the sketch.

A specially developed roof spoiler reduces wind noise and turbulence in the vehicle interior significantly. The wind deflector, also designed for the Roadster, can be stored compactly in the luggage compartment when not in use. Thanks to these details, the Bugatti Grand Sport with a removable hard top can be driven comfortably without the top, even at speeds of up to 200 km/h (124 MPH). The striking cowlings to the left and right of the engine cover panel fulfill two functions at the same time, by the way: On the one hand, they accept the intake air for the engine; on the other hand, they are an elegantly integrated part of the rollover protection.