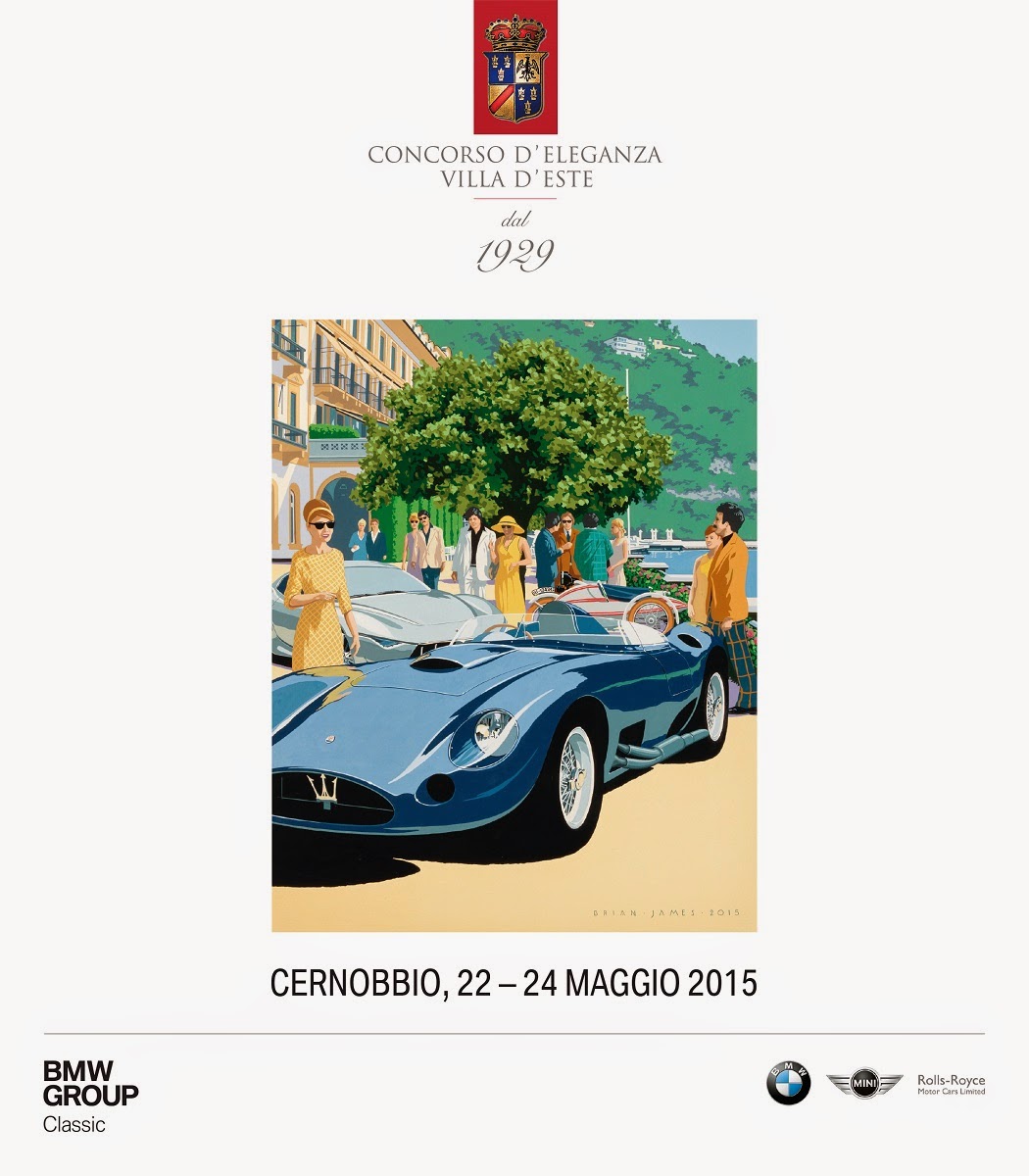 Artworks on wheels: breathtaking automobiles and motorcycles on show at the Concorso d’Eleganza Villa d’Este 2015.

Munich / Milan. Today the Concorso d’Eleganza Villa d’Este ranks among the world’s most exclusive and tradition-rich events for historic cars and motorcycles. First staged in the north Italian town of Cernobbio in 1929, the Coppa d’Oro Villa d’Este – as it was then known – was a showcase for new products from the automotive sector. Now, the upscale Classic Weekend looks back on a richly varied history spanning 86 years. In 1999 the BMW Group took over the patronage of the event, and since 2005 BMW Group Classic has hosted this high-calibre display of rarities jointly with the Villa d’Este luxury hotel.

The fascination of an exceptional decade.

The motto of the three-day event in northern Italy is “Seventies Style – The Jet Set is back” It runs like a thread through the entire weekend, with vehicle classes dedicated to the theme and an exhibition in the grounds of Villa Erba as well as the Saturday evening event in the pavilion at Villa Erba likewise staged under this headline. In addition to early superbikes from the seventies, which include Japanese volume-produced models and European rarities, numerous unusual examples of the classic Mini from the 1970s will also be on display. In addition, an exhibition entirely in the spirit of this era will showcase the five unique models from the BMW Art Cars Collection which it spawned. Visitors to the Concorso d’Eleganza Villa d’Este 2015 will experience three days under the banner of a decade of social upheaval that also marked the dawning of the modern age for BMW.

BMW’s restructuring of the company and its product portfolio in the 1970s propelled the car and motorcycle manufacturer into the modern era while paving the way to lasting international success. At the start was the BMW 5 Series model range, which debuted in 1972, followed three years later by the BMW 3 Series. Just a year later the BMW 6 Series was launched, with the BMW 7 Series arriving in 1977. Many innovations from this era continue to define BMW’s image to this day, from the model designations to the hallmark design cues that typify the brand.

The traditional focus of the event at Lake Como are the beauty contest in which select historic automobiles with an intriguing history compete in various categories, the Concorso di Motociclette for classic motorcycles, and the forward-looking concept cars and prototypes. This unusual mix against a stylish backdrop constitutes the special appeal of this event while underlining the continuous fascination with historic vehicles on two and four wheels. Under this year’s slogan “Seventies Style - The Jet Set is back”, automotive fans from around the world will gather in Cernobbio from 22-24 May 2015 and, in the marvellous grounds of the Villa d’Este luxury hotel and neighbouring Villa Erba, be swept away not just by the alluring past but equally the future of mobility. As well as numerous historic models, the BMW Group will also be represented by two sensational exhibits from the field of concept vehicles.

Among the highlights of this year’s historic cars:

In the 1950s this two-seater coupé had the moniker “Spanish Ferrari”. Under its stretched bonnet was a 2.5-litre V8 engine generating 165 hp that took the car to a top speed of 201 km/h (125 mph). What was unusual about this car was its minimal production run: commercial vehicle manufacturer Enesa built just 90 units. The model on show in Cernobbio was presented at the 1953 World Motor Show in New York’s Madison Square Garden before passing into the possession of the then President of the Dominican Republic, Hector Bienvenido Trujilio Molina. The vehicle has been part of the Black Hawk Collection in California since 1975.

A mere 22 examples of this spectacular racer were built between 1959 and 1961 – exclusively for customers. Maserati never deployed it on the race track as a works car. Developed as a racing prototype, the Maserati dominated the racing scene in the early 1960s, above all in the USA. The Maserati Tipo 61 triumphed twice in the 1,000-kilometre race on the Nürburgring. Its nickname “Birdcage” derives from its unusual, intricately constructed tubular space frame designed by Giulio Alfieri. Weighing just 30 kilograms, it consisted of over 200 thin steel tubes while boasting similar rigidity to far more expensive monocoques. The Maserati Tipo 61 “Birdcage” weighed in at 600 kilos and was driven by an in-line four-cylinder that nestled under its extremely flat bonnet and delivered 250 hp to take the car to a top speed of just over 300 km/h (186 mph).

Just two units of the Panther 6 saw the light of day. The vehicle was built in 1976 almost singlehandedly by Robert Jankel, the owner of the small British car company Panther. The two-seater convertible runs on six wheels. Four small wheels with 205/40 VR13 tyres are mounted on the two controlled front axles while the rear axle has two considerably larger wheels. An unusual vehicle in every way, it drew on the design principle of the Tyrrell P34 that caused such a sensation when it debuted in the Formula One World Championship in 1976 and applied it to a roadgoing car. The Panther 6 was powered by an 8.2-litre eight-cylinder Cadillac engine with twin turbochargers that was mounted above the rear axle. The official figures: peak output: 600 hp, top speed: 200 mph (approx. 320 km/h).

To mark the anniversary of “90 years of the Rolls-Royce Phantom”, this year’s Concorso d’Eleganza Villa d’Este features a Rolls-Royce Phantom 1-6 Concours class, the so-called “Phantom Story”. One of the absolute gems of this class is the Rolls-Royce Phantom IV – without doubt the most exclusive vehicle that Rolls-Royce ever built. Between 1950 and 1956 a mere 18 examples were produced for a client list comprising royalty, the nobility and heads of state. Of these, 16 have survived. On show at Lake Como is the model that Queen Elizabeth ordered in 1954 for her sister Margaret, who was very partial to taking the wheel herself.

It has a landaulet body and, unusually, features an automatic transmission. It belonged to the British Royal Family for more than 30 years.

The historic vehicles nominated for awards at the Concorso d’Eleganza Villa d’Este 2015 are divided into nine classes for cars and five for motorcycles. These categories offer an overview of the extraordinary diversity of the rarities on four and two wheels presented at Lake Como. The historic automobiles are split into the following groups:

Class C: “Phantom Story” – The Rolls-Royce Phantom through the ages

Class D: “Made to Measure” – The final flowering of the coach built coupe

Class F: “Hollywood on the Lake” – Convertibles for a grand entrance at Villa d’Este

Class H: “How Fast is Fast Enough” – Mid and rear-engined supercars from the disco era

Class I: “Two seats against the stopwatch” – Classic sports racers

The Concorso di Motociclette – more than just a competition for two-wheelers.

The Concorso di Motociclette has been part of the Concorso d’Eleganza Villa d’Este programme since 2011. A special exhibition in the parkland of Villa Erba is devoted to the Isle of Man Tourist Trophy. The world’s oldest motorcycle race takes place on the Snaefell Mountain Course. Covering 37.73 miles (just over 60 kilometres), this course is unmatched by any other in the merciless challenges it throws at man and machine. The route uses public roads on the island which are closed to traffic during training and racing. The fastest bikes in the TT clock an average speed of just over 210 km/h (130 mph) – some 50 km/h (30 mph) more than on modern Grand Prix motorcycle circuits. In Cernobbio the original winning bikes from the years 1939, 1954, 1964 and 2014 – from Germany, Britain and Japan – can be admired.

This 500cc single-cylinder bike with four-valve technology hails from 1934 and the drawing board of the well-known French graphic designer Geo Ham. Its art deco styling is as striking as it is unusual. Georges Hamel, to give him his full name, is regarded as one of France’s most renowned artists in the field of cars, motorcycles and motor sport. His designs include an art deco body for Figoni & Falaschi, which was mounted on a Delahaye 135. The car was presented at the 1936 Paris Motor Show and acquired by the Aga Khan.

Only very few vehicles remain from the early years of the Puch-Werke (bicycles, engines, motorcycles, cars) that was founded in 1899 and based in Graz, Austria. The model on show in Cernobbio is a motorcycle dating to 1912 and boasting playful details in its paintwork and equipment features. Company founder Johann Puch retired in 1912 and was made honorary president. In 1914 the plant employed 100 staff and had an annual turnout of 16,000 bicycles, 300 motorcycles and 300 cars. In 1928 it merged with Österreichische Daimler-Motoren AG to become Austro-Daimler-Puchwerke AG. A more recent merger with Steyr-Werke AG resulted in Steyr-Daimler-Puch AG. In the 1990s various production sectors were shut down or sold on. The remainder of the company was taken over by Magna Holding AG in 1998.

The historic motorcycles at the Concorso d’Eleganza Villa d’Este 2015 are presented in the following categories:

Class A: “The establishment” – The first two decades

Class B: “Gentleman’s ride” – The luxury of the thirties

Class C: “Experiments in the Fifties” – Beyond the mainstream

Class E: “The heroes” – The big bike boom of the seventies

Mobile rarities – whether historic classics, design studies or prototypes from various decades – are frequently described as “artworks on wheels”. This year the epithet takes on a dual meaning in Cernobbio. True to the motto of the Classic Weekend, the glamour of the seventies is revived at Lake Como not least with a special exhibition held in the Rotunda at Villa Erba. It presents four BMW Art Cars from 1970s along with the latest example in the collection. They were given a new exterior design by artists of the time, such as Alexander Calder, Frank Stella, Roy Lichtenstein and Andy Warhol, to become automotive works of art. In 2010 Jeff Koons produced the most recent model in the series. Originally limited to BMW racing cars, this scheme was later extended to production models – and the Art Car Collection was born. Products of advanced technology challenged the creative powers of world-famous artists. The BMW Art Cars reflect the art and culture of their time. They are as exemplary as they are unique.

The Concorso d’Eleganza Villa d’Este 2015 starts on Friday, 22nd May 2015 with the arrival of participants. On Saturday and Sunday, the public days give all car and motorcycle enthusiasts the opportunity to take a good look at the rare and exceptional models against the imposing backdrop of the Villa d’Este luxury hotel. The Concorso di Motociclette takes place at midday on Sunday in the grounds of Villa Erba. ENDS