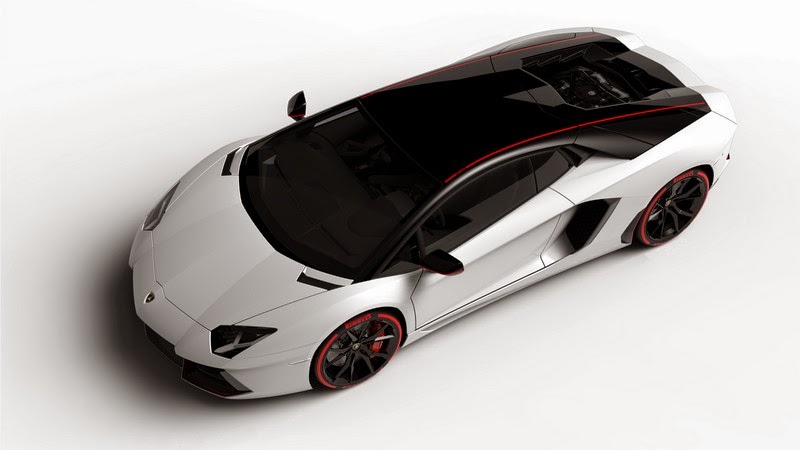 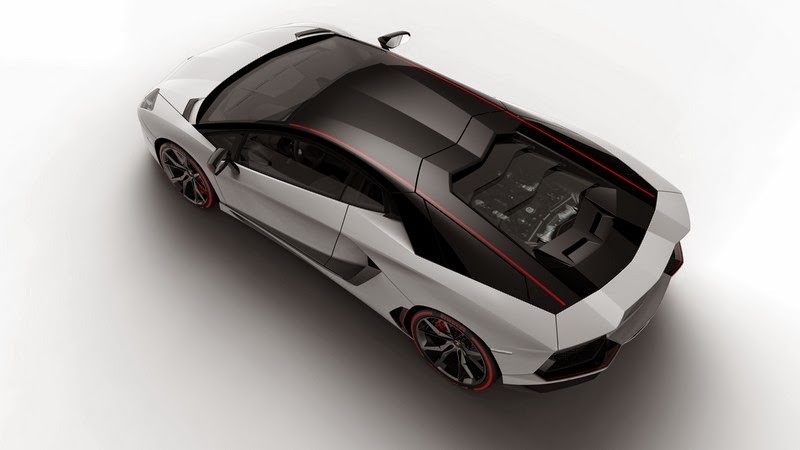 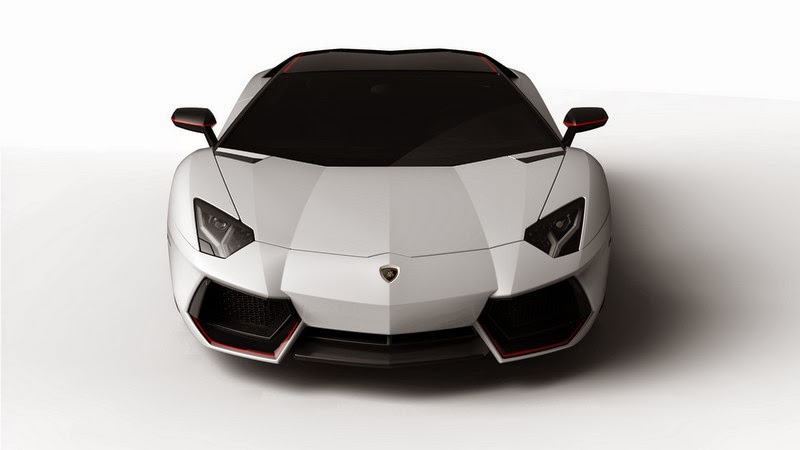 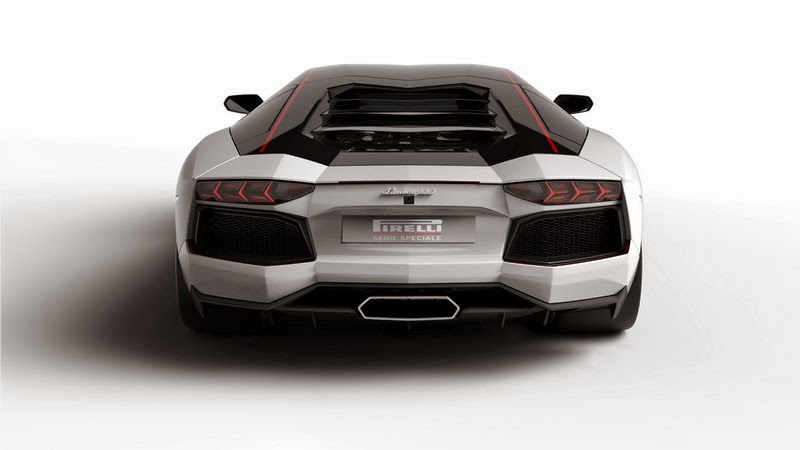 Sant’Agata Bolognese, 19 December 2014 - Lamborghini has announced production of an exclusive new special series, the Aventador LP 700-4 Pirelli Edition, created to celebrate the long and ongoing history of collaboration with restigious Italian tire manufacturer Pirelli. The partnership began back in 1963, the year the House of the Raging Bull was established, and since then all Lamborghini cars have been equipped with Pirelli tires. The two firms share not only their Italian origins but also, and above all, a constant quest for technological innovation.

The new Aventador Pirelli Edition, available in Coupé and Roadster versions, will be produced in a special series and is available to order now from dealers, for delivery early summer 2015.

The super sports car maintains all its unique technical features, first and foremost the carbon fiber monocoque, the V12 engine, pushrod suspensions and the permanent all-wheel drive, which underlie the Aventador’s global success. The special Pirelli series is enhanced by exclusive equipment specifically designed by the Lamborghini Centro Stile.

The exterior sports a two-tone color scheme in two options. The first is matte black for the roof, the pillars, the rearview mirrors, the engine hood, and the front, rear, side and moving air intakes, in contrast with six glossy finishes for the rest of the body (Giallo Spica, Rosso Mars, Bianco Isis, Nero Aldebaran, Grigio Liqueo, and Grigio Ater). The second option is glossy black for the upper parts of the car and the air intakes, in contrast with four matte finishes for the rest of the exterior (Bianco Canopus, Nero Nemesis, Grigio Adamas, and Grigio Titans).

Another distinctive element of the body is a thin red stripe that runs along the roof and the engine hood, the rearview mirrors, and the outer profiles of the air intakes, a stylistic feature designed to evoke the unmistakable Pirelli branding. The Pirelli logo, once again in red, is visible at the start of the two roof lines and on the tires.

Standard equipment for the exterior also includes the transparent engine hood, the engine compartment in carbon, glossy black Dione 20’’/21’’rims, P Zero tires with red logo and red calipers (yellow only in the case of the Rosso Mars exterior).

The interiors of the Aventador Pirelli Edition are upholstered with black Alcantara with red contrast stitching. The red stripe on the body is also repeated on the inside, running along the interior ceiling and the seats, which feature the Lamborghini and Pirelli crests embroidered in red. Leather inserts adorn the door panels and the seat sides. And finally, to underscore its exclusiveness, each car will have a ‘‘Pirelli special series’’ plaque inside.

Lamborghini and Pirelli for more than 50 years

The collaboration between Lamborghini and Pirelli dates back to 1963, the year in which Ferruccio Lamborghini turned to Pirelli to supply the tires for the first car of his newly established automotive company: the 350 GTV, presented as a prototype at the Turin Motor Show the same year.

Both this model and the street version presented the following year at the Geneva Motor Show, the 350 GT, sported Pirelli Cinturato HS tires, specifically developed at the time to equip sports cars that were already capable of reaching a top speed of 240 km/h. The abbreviation HS stood for High Speed, indicating the tire’s ability to withstand the high speeds of the newly developed super sports cars of the ‘60s.

The year 1966 marked the definitive confirmation of the Lamborghini brand, with the introduction of the legendary Miura. Entering the Pirelli catalogue of 1967 -- along with the Lamborghini 350 GT and 400 GT - the latest member of the Sant’Agata Bolognese family was equipped with a new generation of Cinturato HS tires: the CN72, in the 205 VR 15 size. From the traditional tread pattern of the classic Cinturato CA67, the new tire brought a quieter and more comfortable design and was adopted as original equipment for all the subsequent Lamborghini models, including the Espada, which appeared in 1968. A few years later, when Lamborghini requested for the Miura a lower profile ‘‘Series 70’’, i.e. a tire with a much lower sidewall with respect to the width of the tread, designed to considerably improve cornering, Pirelli introduced the new Cinturato CN73 size 225/70 VR 15. This paved the way for the "low profile" tire that led to the Pirelli P7, chosen in 1971 as original equipment for the Lamborghini’s new super sports car, the Countach, which dominated the entire decade of the ‘70s.

Once again it was Lamborghini who christened on the road another new product in the Pirelli family. In 1988 the Countach ‘‘Anniversary’’ version -- launched to mark the company’s 25th anniversary -- was one of the first supercars to be equipped with the new Pirelli P Zero tires.

But the partnership between Pirelli and Lamborghini has not been limited to technological aspects alone. Pirelli advertisements have often featured the supercars of the House of the Raging Bull. The Lamborghini Countach Anniversary, for example, was used in a series of Pirelli advertising campaigns aimed at the American and Southeast Asian markets, just like the Miura had starred in a campaign in 1970 for high-prestige original equipment with the eloquent title: ‘‘The Miura chose Pirelli Cinturato’’.

Meanwhile, between 1986 and 1988 Lamborghini produced the super-off-road vehicle LM002. For this precursor to modern luxury SUVs, Pirelli specially designed the Scorpion range of tires, with innovative features such as the use of Kevlar in the ply structure and run-flat construction. The LM002 participated in the 1988 Paris-Dakar Rally, marking the beginning of the Lamborghini/Pirelli duo in racing. The sporting collaboration between the two houses is still going strong, and Pirelli is the exclusive supplier of the one make series Lamborghini Blancpain Super Trofeo.

1990 marked the arrival of the Lamborghini Diablo, built in 3000 units, all equipped with Pirelli PZero tires, while the early 2000s were dominated by the Murciélago (2002) and the Gallardo (2003), both fitted with PZero Rosso tires.

In 2007, the Lamborghini Gallardo starred in the Pirelli film ‘‘Mission Zero’’ with Uma Thurman, and the same model launched Pirelli’s Winter Sottozero II tire on the snows of Zermatt in 2008.

In perusing this intensive album of memories, the images of today could not be left out, which continue to show Pirelli technology and safety side by side with the supercars of the House of the Raging Bull. The Veneno, a dream car created to celebrate Lamborghini’s 50th anniversary, features specially developed Pirelli tires bearing a red logo that brings to mind the Pzero Formula One tires. And then there’s the latest entry, the Huracán, fitted with specially developed P Zero tires bearing a specific marking on the tire with the letter ‘‘L’’.