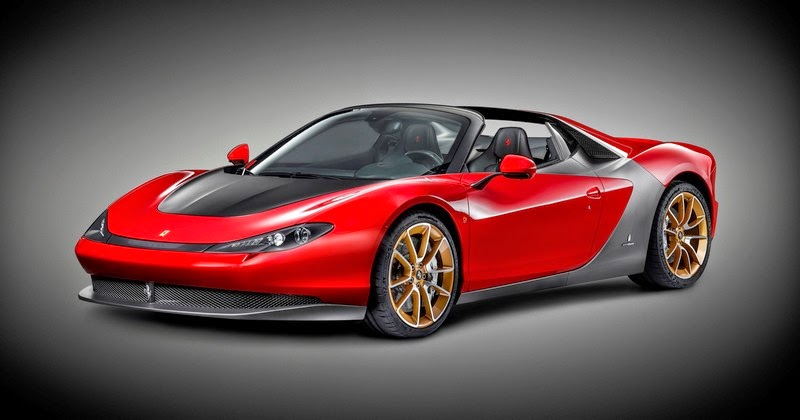 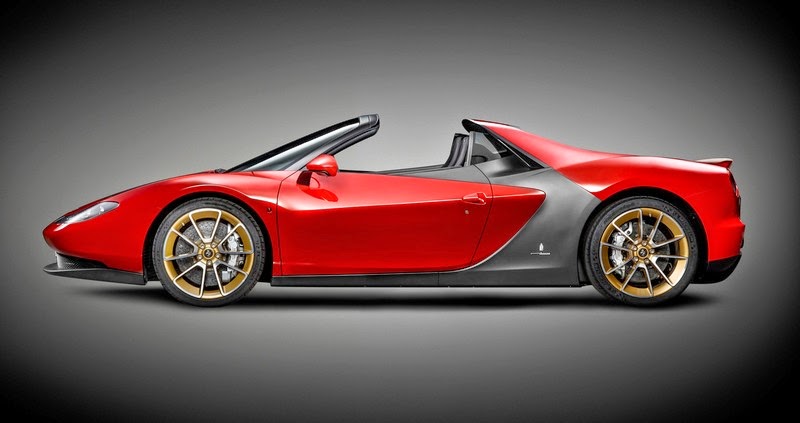 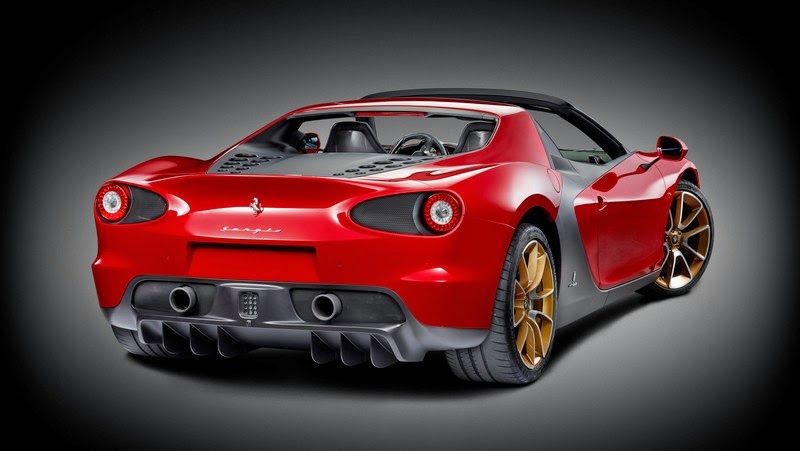 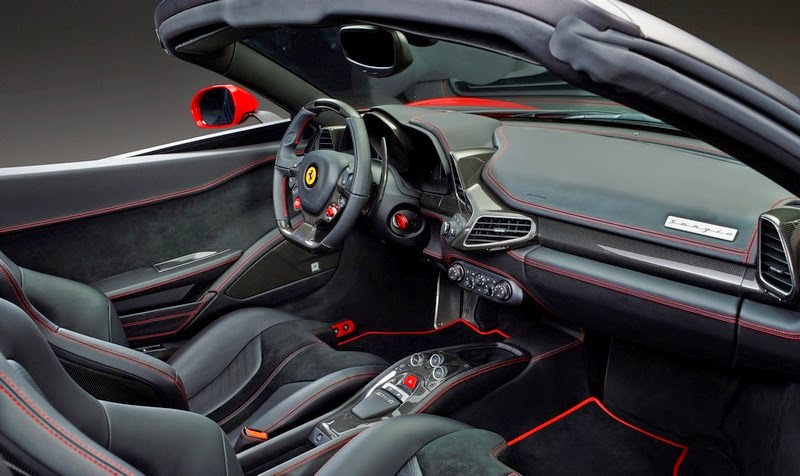 Ferrari Sergio is revealed. First unit delivered in the UAE

It was Geneva Motor Show in 2013 where Pininfarina together with Ferrari unveiled an amazing showcar – a 458 Spider-based Sergio. A tribute for the Sergio Pininfarina, who passed away in July, 2012 is a breathtaking speedster of the future. An incredible low and wide two-seater of the future would have stayed a one-off-a-kind creature, but Ferrari and Pininfarina took a decision to build six more examples of it. For exclusive, selected clientele, of course. These unique collector‘s treasures are already sold for lucky ones. Indded, Ferrari is much busy in the middle east recently. Not only the company presented its ferocious FXX K, but also the first example of the Sergio has just been delivered to United Arab Emirates to its new owner, the SBH Royal Auto Gallery.

Regarding the production version of the Sergio supercar, it has received an obvious restyling and it looks more like a rebody of the 458 Spider than a showcar Pininfarina presented at Geneva. The car lost most of its dramatic stance. It got a windshield, a complete rework of both ends, especially rear end, where its taillights have been replaced with 458 Spider‘s ones. Also, it got two separates exhausts instead of a central one found on the original Sergio Concept. Surely, it also lacks scissor doors – a nice feature found on Pininfarina‘s vision.

All in all, the Ferrari Sergio looks nothing more but just a shadow of the original concept. Its marvelous glory is ruined by misdimensions because of which this black-tied Ferrari 458 Spider in a red suit looks like it feels much incomfortable in a new dress. Price of this toy? This is perhaps one of the most unimportant subjects to discuss. Even if you could buy yourself one of these it is already too late. Knowing that Ferrari can easily sell $2.7 million track-only supercars which can be driven only on special occassions (I mean exactly, the FXX K), there would little surprise to see new tailor-made Ferraris to leave Maranello plant soon. No matter what the price is, Ferrari will surely find its home in rich garages and extra millions in their owner‘s pockets. One could just hope that Ferrari will make a stylish car again, not a cheap-looking rebody of its existing model just to attract attention and to make some extra cash. Ferrari, fingers are crossed!

THE FIRST FERRARI SERGIO ARRIVES IN THE UAE

Abu Dhabi, 5th December 2014 – The first Ferrari Sergio has arrived in the United Arab Emirates. It has been delivered today to its new owner, the SBH Royal Auto Gallery in the UAE, at Abu Dhabi’s Yas Marina Circuit, where the Finali Mondiali Ferrari are being staged and which is home to the Ferrari World theme park.

Designed by Pininfarina, just six of this incredibly limited edition roadster are being built. The car was created to celebrate the spirit and core values of the historic Cambiano company in the 60th anniversary year of its collaboration with the Prancing Horse. Needless to say, Sergio was the only possible choice of name for the model, in homage to great Sergio Pininfarina, who sealed the unique, longstanding partnership with Ferrari.

The Ferrari Sergio is a genuinely radical car. It is both exclusive and spare in the sense that every single element aboard is focused entirely on performance. An authentic open-top, it explicitly references the track, underscoring and intensifying its sense of sportiness, fun behind the wheel and the pleasure of design at its purest.

The Ferrari Sergio’s performance and dynamics are excellent in the extreme too. It is based on the 458 Spider and retains the latter’s technological content as well as all of the functional aspects of its cockpit. It is powered by the latest 605 hp version of Ferrari’s naturally aspirated 4497 cc V8 which has won the International Engine of the Year award on three consecutive occasions. This power unit also guarantees the car sprints from 0 to 100 km/h in just 3 seconds.

The Ferrari Sergio has an extremely simple, clear style. Both its volumes and treatments of its surfaces reflect the spirt of Pininfarina’s 1960s and 70s creations for Ferrari. Its proportions have been pushed to the extreme with the front of the car seeming to penetrate the rear which itself projects forward. The result is an exceptionally sculptural, three-dimensional take on the classic roadster. The two bodyshell masses are melded together via a longitudinal black insert, the main styling cue of the design.  The flank is also characterised by the same black longitudinal element which acts as both a dividing and unifying element between front and rear. The two sections of the car flow effortlessly into one another resulting in sublimely harmonious yet extremely muscular forms.

As with all Ferraris, the Sergio’s design was never an end in itself but is a marriage of function and aesthetics. The semi-floating development of the front spoiler beneath the bonnet balances downforce and optimises heat exchange. The roll-bar is a modern take on the classic Ferrari flying buttress and negative rear window.  Integrated into the roll-bars are the air intakes for clutch and gearbox oil cooling.  Lastly, the rear nolder and rear extractor generate downforce, adding an efficient finishing flourish to the car’s design.

At the front of the car, Pininfarina has integrated the headlights in a classic move, turning them into a single transparent transverse element, a signature of the car’s extreme formal purity. At the rear, the circular tail lights are another modern nod to Ferrari history.  The two-tone theme continues on both the front bonnet and rear deck with the latter featuring the iconic circular air vents seen on other iconic Pininfarina creations from the past.

The cockpit is pared-back and functional in the extreme with the engine compartment actually hugging the backs of the seats. The example delivered to Abu Dhabi has three-layer red exterior paintwork and an extremely sporty cockpit with black leather upholstery with contrasting red stitching, Alcantara seat inserts, and extensive carbon dash and door well trim. It also features Sergio-specific forged wheels, in this instance gold in colour with a diamond finish.

Each one of the six Ferrari Sergios was configured by its owner in dedicated sessions at the Tailor Made atelier in Maranello where clients are invited to personalise their cars to their own individual tastes. The atelier offers enormous freedom of choice in terms of colours, materials and finishes. As a result, every detail is extremely exclusive, thereby continuing the Prancing Horse tradition begun in the 1950s and 60s of creating bespoke cars minutely tailored to each client’s wishes.