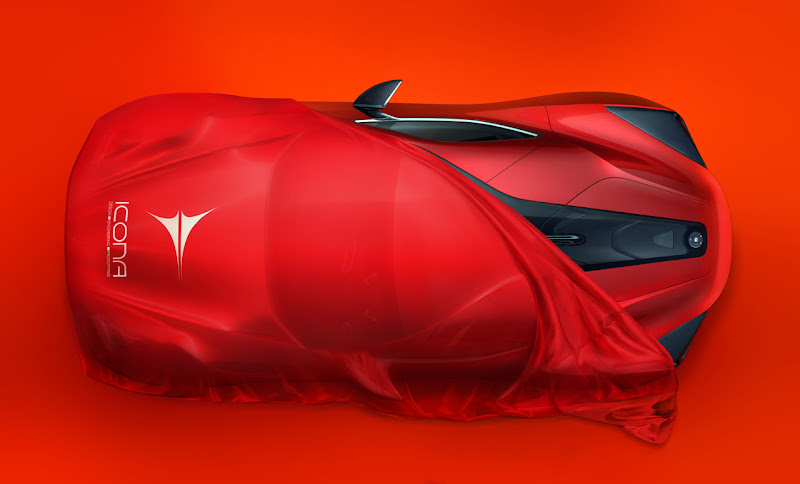 Icona Shanghai brought cover in 2011. A brand-new Italian design and engineering company headquartered in China, revealed a couple of innovative and advanced concept vehicles at the Shanghai back then. The first one was a street scooter – an electric semi-closed three-wheeler named E3WM. The second 2011 model from this Chinese company was the Fuselage. This was like the fresh air in the routine of nowadays. The stylishly designed luxurious hybrid electric sedan prototype is powered by a 100kW electric engine good enough for a proposed top speed of 200 km/h and a maximum driving range of 220 km in fully electric mode.

Two years after the global premiere, Icona Shanghai will showcase a new concept model – a V12-engined supercar named Vulcano. Its front-mounted mighty power aggregate has been prepared in Italy by Claudio Lombardi and develops 900hp which enables this machine to hit a top speed of estimated 350 km/h and take a sprint of 0-200 km/h under ten seconds.

Talking about the design of the Vulcano, everything is yet to be released. However, this internationally created one-of-a-kind model has been designed by a French designer Samuel Chuffart whose Fuselage was the first attempt while being a design director at Icona. Taking into account this fact, the Vulcano is set to be anything but a stunner.

ICONA VULCANO: THE BEAUTY AND THE BEAST COME TOGETHER

A one-off supersports car, coachbuilt in Italy and designed by Icona, the Italian design house based in Shanghai

Italy, 21 March 2013: Icona reveals the first teaser of the Icona Vulcano (iconavulcano.com). This new supercar will be revealed at the Shanghai Auto Show next April.

The Icona Vulcano brings together different skills and expertise of a very Italian tradition. The powertrain is the work of well-known Claudio Lombardi, former powertrain technical director of Ferrari and mastermind of numerous world champion cars: a front engine V12 two-door two-seater car, reaching up to 900 horsepower through a masterful combination of combustion engine and electric motors. The top speed will be around 350 km/h, and 0-200 km/h will be under ten seconds.

Alongside its astonishing performance and pedigree, the design of the Icona Vulcano is an evolution of the very advanced form language which was first introduced on the Icona Fuselage concept in 2011 by Samuel Chuffart, Icona's design director. The aim of the design approach is to express the amazing capabilities of this extremely powerful car, while maintaining harmonious and generous shapes: bringing together the Beauty and the Beast.

Talented young French designer Samuel Chuffart brings exceptional international experience to his role as design director of Icona. During his eight year tenure at Nissan Design in Europe and the US, Mr. Chuffart played an instrumental role in the creation and realization of the Nissan DNA which is known today. Mr. Chuffart then moved to Jaguar-Land Rover, before being selected for the position of Chief Designer at a leading design house in Italy in 2008, successfully developing numerous production cars soon to be seen on the road.

Claudio Lombardi is one of the most successful Italian motor engineers: racing director of Lancia that won seven World Rally Championships with 037 Rally and Delta S4 from 1982 to 1991, powertrain technical director of Ferrari for Formula One and GT cars from 1991 to 2000, and project leader of Aprilia to win the Superbike World Championship in 2010 with Max Biaggi, using one of the most powerful and light engines ever developed in its category. In the last two years Lombardi founded AIPA to develop different powertrain concepts to make the most of the combination of combustion engines and electric motors for innovative integral powertrain.