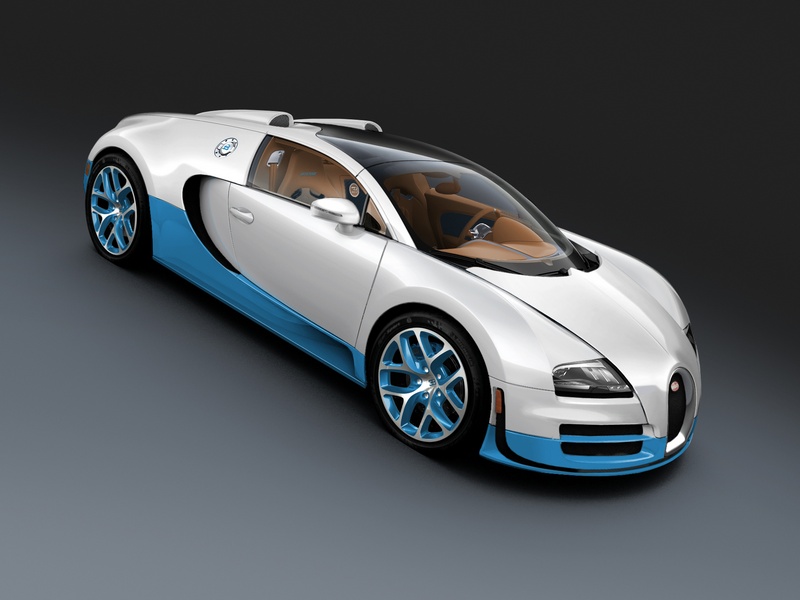 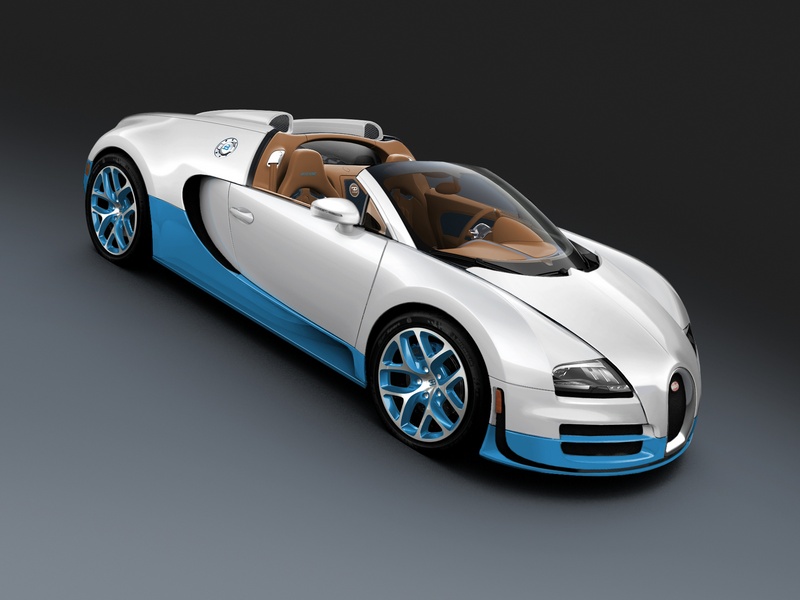 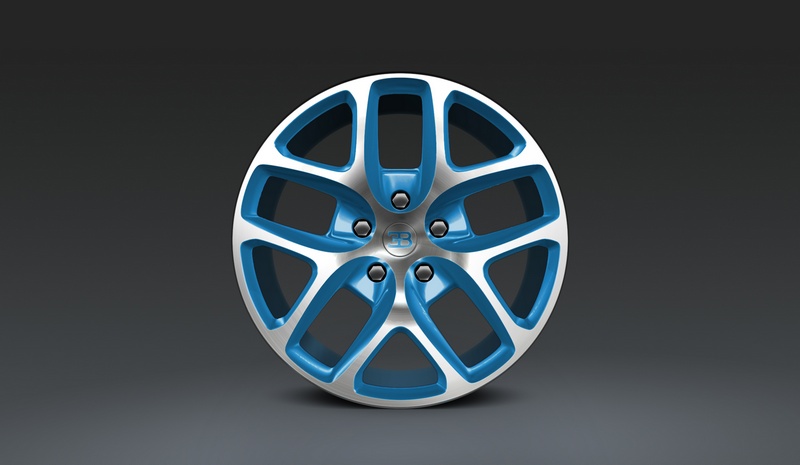 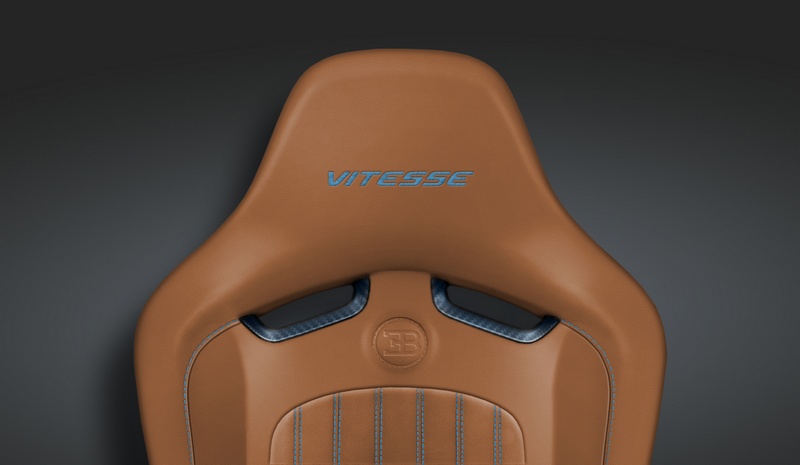 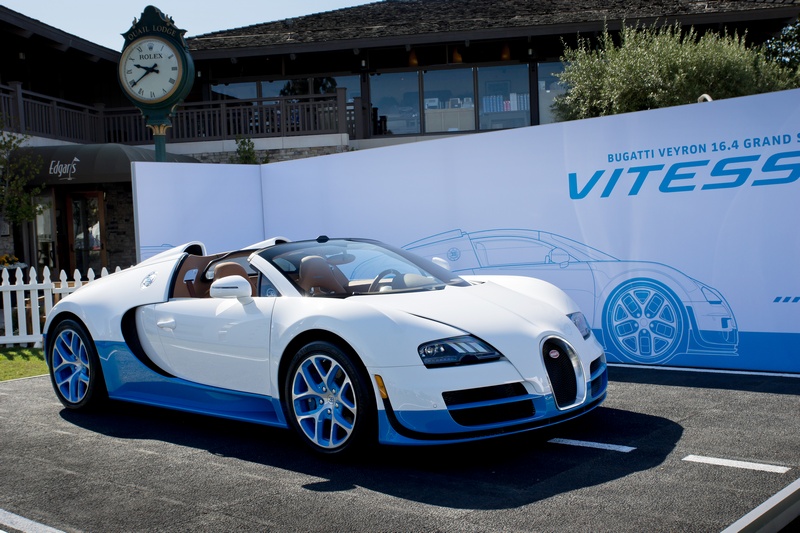 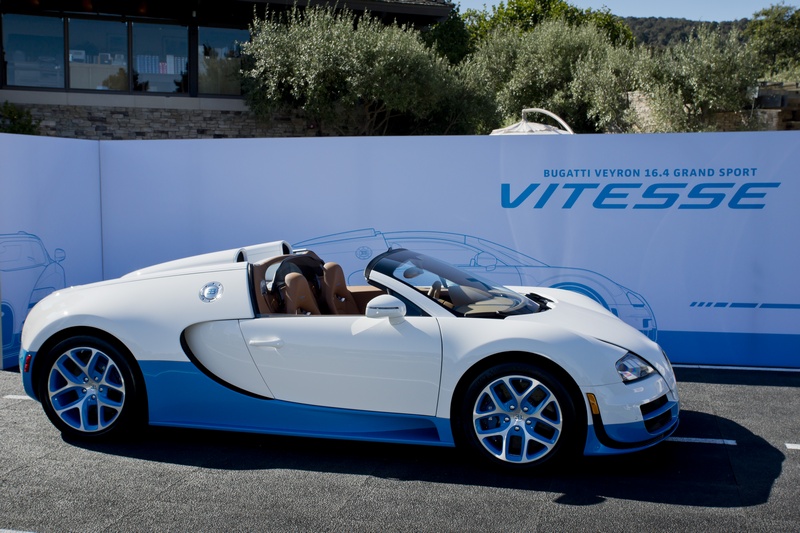 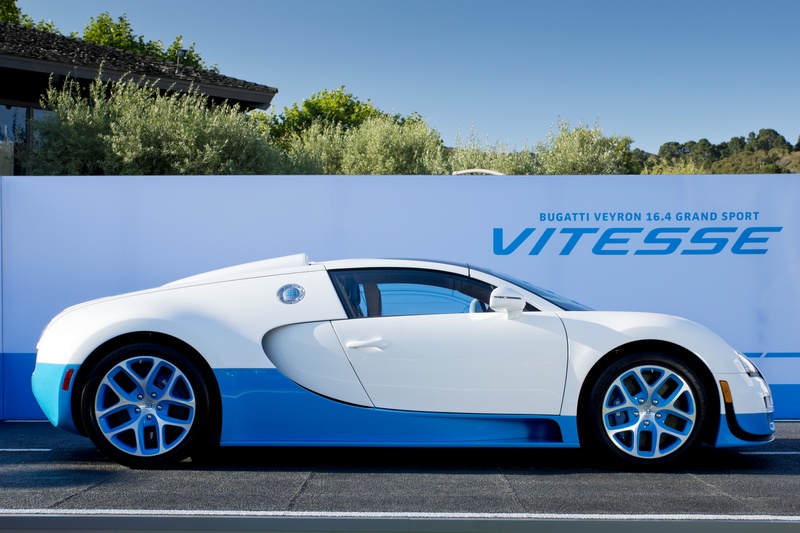 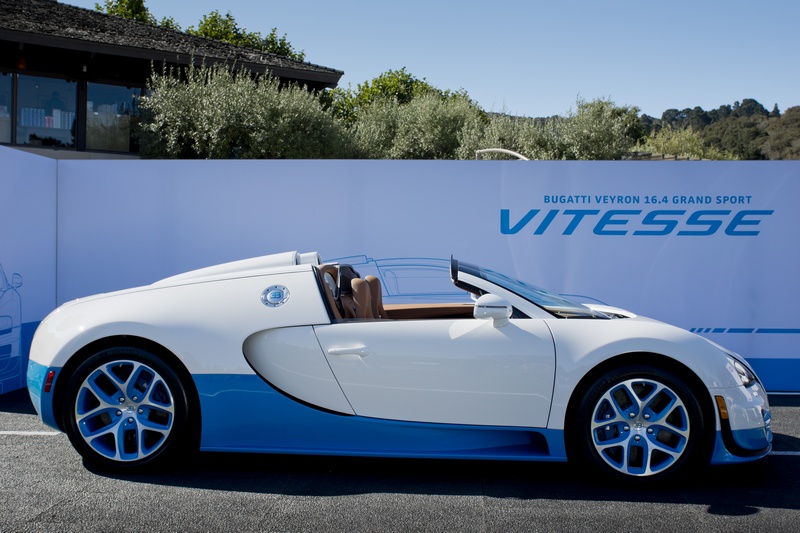 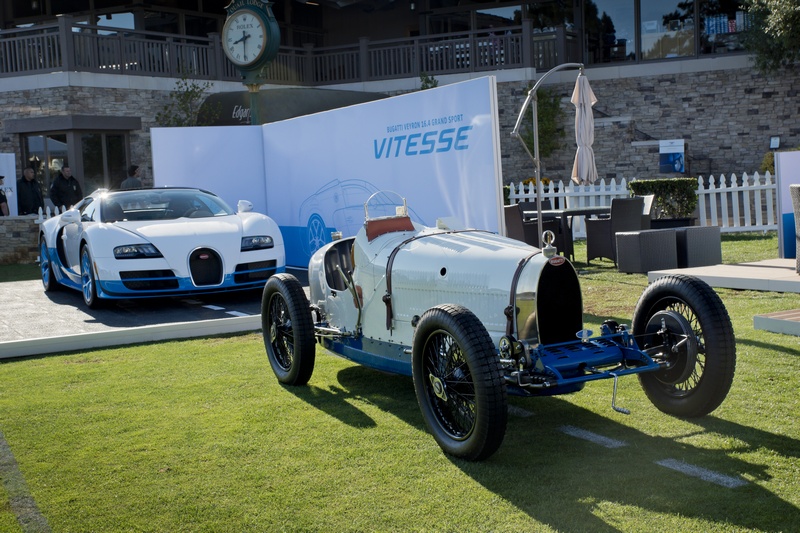 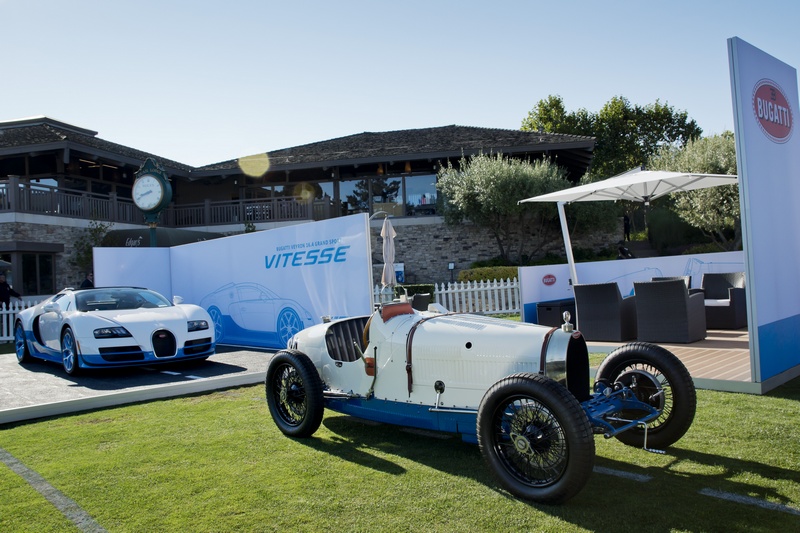 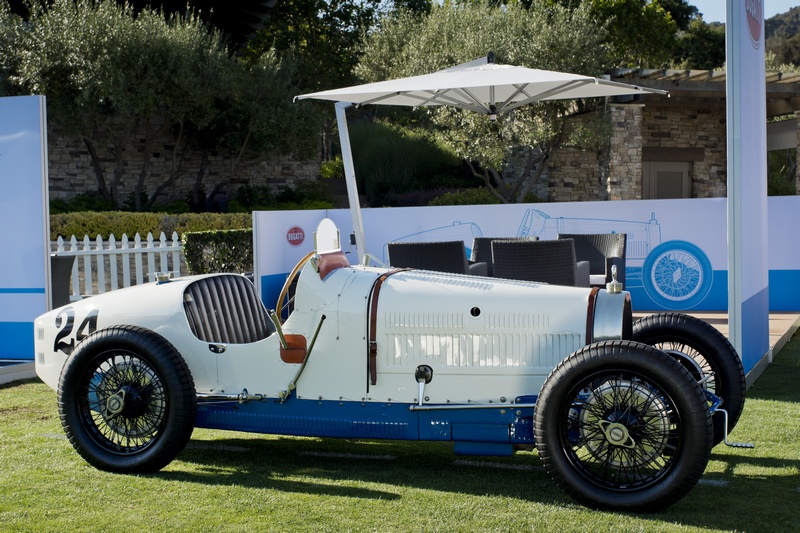 - Bugatti presents most powerful roadster ever at Monterey Auto Week

Molsheim/Monterey, August 17, 2012 – To kick off Monterey Auto Week, Bugatti will debut a special edition Bugatti Veyron 16.4 Grand Sport Vitesse in a unique Bianco and New Light Blue color scheme for the first time publicly today at “The Quail: A Motorsports Gathering”. The color combination is based on the famous Type 37A, which was built in 1928, won a multitude of Grand Prix races in its time and is now owned by Jay Leno.

Dynamics in figures. The new Bugatti Veyron 16.4 Grand Sport Vitesse boasts a remarkable maximum torque of 1,500 Nm (at 3,000–5,000 rpm) from the 7.9-liter capacity of its W16 engine. The maximum output (1,200 hp) is reached at 6,400 rpm. These figures allow the car to reach 100 km/h (62 mph) from standing in unbelievable 2.6 seconds. The top speed of 410 km/h (255 mph) makes the four-wheel drive Vitesse (like all Veyrons) the fastest production roadster ever. The maximum speed is reached on closed tracks with special safety precautions. In “normal” handling mode, the Vitesse is electronically limited to 375 km/h (233 mph).

Optimized drive system. The 199 hp increase over the Grand Sport has been mainly achieved by using four larger turbochargers with new intercoolers. Furthermore, Bugatti has extensively reinforced all drivetrain components in order to safely transfer the immense forces at all times. The gearing of the seven-speed dual-clutch gearbox (DSG) in particular has been adapted to the new requirements. In this context, as on the Super Sport, Bugatti has also modified the air ducting in the area of the drivetrain. As a consequence of the larger turbochargers and the overall reduced back pressure, it was even possible to reduce the fuel consumption slightly despite the increased output. The fuel system, with a four-pump tank, has been taken from the Super Sport.

Chassis. In order to put the unrivalled power onto the road absolutely safely and masterfully, the engineers have reconfigured the chassis of the Vitesse. Thanks to the quick-responding dampers that have been adapted from motor racing, the control of the vehicle has been further improved and perfectly balanced. Body roll and pitching during hard acceleration and braking are now virtually imperceptible. Optimized wheel-load fluctuations have further reduced understeer and allow a maximum level of active safety. In addition to the incomparable lateral acceleration of up to 1.4 g, the precise interaction of the tires (on all-new, lighter 20-inch “Vitesse”-type alloy wheels), together with the intelligent all-wheel-drive system, ensures extremely good handling. The chassis, all-wheel-drive system and the revised ESP form a dynamic alliance: since the reconfigured ESP kicks in slightly later, for example when you accelerate out of corners, the Vitesse also provides a more dynamic performance in these situations. It goes without saying that Bugatti has adapted the brake-cooling system to account for the even higher engine output. The brakes, which are unparalleled in terms of stability and performance, now have additional and larger air intakes.

In general, it can be said that the Vitesse is even sportier than the 1,001 hp Grand Sport, but at the same time it has not been turned into a full-blown racing car. It therefore remains easy to master for the driver. In this context, it is simply astounding that Bugatti managed to increase comfort in the chassis area by reducing the dynamic natural frequency.

Body. Bugatti has developed a new roof spoiler for the Vitesse that significantly reduces wind noise and buffeting in the interior. Furthermore, there will be a new windbreak for the roadster that can be stored away compactly in the luggage compartment when not in use. Both details will also be available for the Grand Sport. Together, they allow extremely relaxed, open-top driving even at speeds of around 200 km/h (124 mph).

Numerous aerodynamic measures at the front and rear that appeared on the Super Sport have been adapted for the Vitesse. The front end is therefore characterized by larger air intakes; the two central air intakes to the left and right of the Bugatti radiator grille are divided horizontally by a bar. The bottom air vent stretches sideways into the wheel housing and gives this exceptional sports car an extremely masterful appearance. Immediately below this air intake, you will see a new, visually refined front spoiler that has been designed in a similar way to the splitters used in motor racing. The improved xenon headlights from the Super Sport, which are now framed in black, are also new. The rear end, which is also derived from the Super Sport, is characterized by a double diffusor and a centrally positioned twin tailpipe. A new Park Distance Control system (PDC) watches over the front and the rear.

The two air scoops on the left and right of the engine cover (redesigned for the Vitesse) are a characteristic of the Grand Sport and thus also of the Vitesse. These air scoops fulfill two tasks on the roadster. On the one hand, they pull in air for the engine, and on the other, they are an elegantly integrated part of the anti-roll protection system. As on the Super Sport, a full-carbon-fiber monocoque, which allows an extremely high torsional rigidity combined with maximum passive safety, is also used on the Vitesse. The outer skin is also made completely from carbon fiber and, consequently, the new Bugatti Veyron 16.4 Grand Sport Vitesse is available in clear-coated exposed carbon fiber.

Interior. Carbon fiber is (along with stainless metals such as aluminium and magnesium) also the dominant material in the interior of the Vitesse. Numerous interior parts are now made from carbon fiber in the 1,200 hp roadster. This includes the center console extension, a cover with EB logo in the rear-bulkhead leather trim (between the seat backrests) and the belt outlet covers on the seats. The décor on the center console, the door inserts and the adjoining trim on the instrument panel are also made from carbon fiber. Contrasting stitching is also featured on the leather armrest between the seats, which comes without the typical quilting. Also new: knee pads in the center tunnel area, an additional 12 V socket (in the glove compartment), the restraint systems, the illuminated start and parking lock button (same as Super Sport), an instrument cluster with shift-up information and – as a matter of honor – the power gauge that now goes up to 1,200 hp.

Following the success of the Veyron 16.4 Super Sport, Bugatti did not have to wait long before it received the first inquiries about an open-top version of the Grand Sport that could also deliver 882 kW (1,200 hp).

“We were instantly electrified by the idea of transferring the power of the Super Sport to the Grand Sport, which previously delivered a maximum of 1,001 hp, and thus taking the roadster to a new level,” says Wolfgang Dürheimer. The President of Bugatti Automobiles S.A.S. continues: “Our team has managed to transfer the world’s most powerful car engine to the open-top sports car while taking all vehicle dynamics and aerodynamic parameters into consideration.”

Configuration of the show vehicle. There is no end to the individualization options for the Bugatti. Each one of the more than 300 Veyrons built is therefore unique. This also applies to the special edition Vitesse model Bugatti is exhibiting at The Quail. This version of the new roadster orientates itself at a Type 37A, which was built in 1928, won a multitude of Grand Prix races in its time and is now owned by the famous TV presenter Jay Leno. The upper area of the body is finished in “Bianco” including the roof area and the air scoops. The lower body panels (side skirting, front spoiler, radiator grille frame and rear apron with diffusor), the inner surfaces of the wheel rims and the underside of the automatically extending rear spoiler are in “New Light Blue.” The interior is largely out of a noble Cognac leather building a contrast to the extrovert exterior colors. This Vitesse version costs 1.74 million euros.