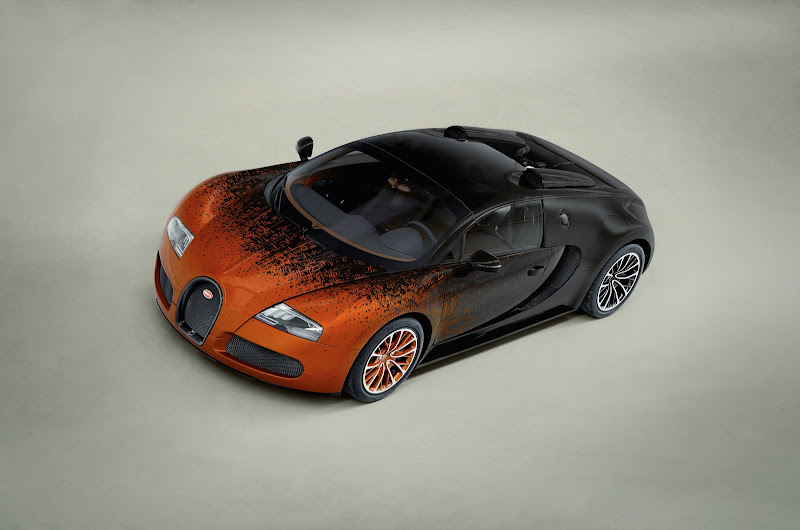 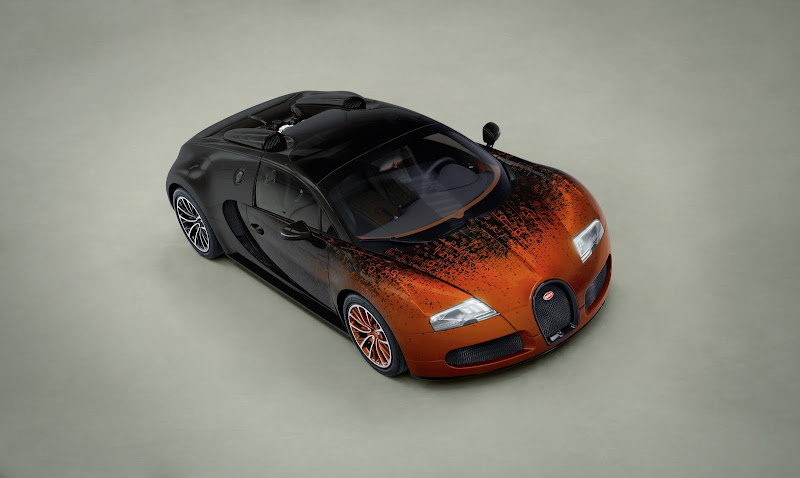 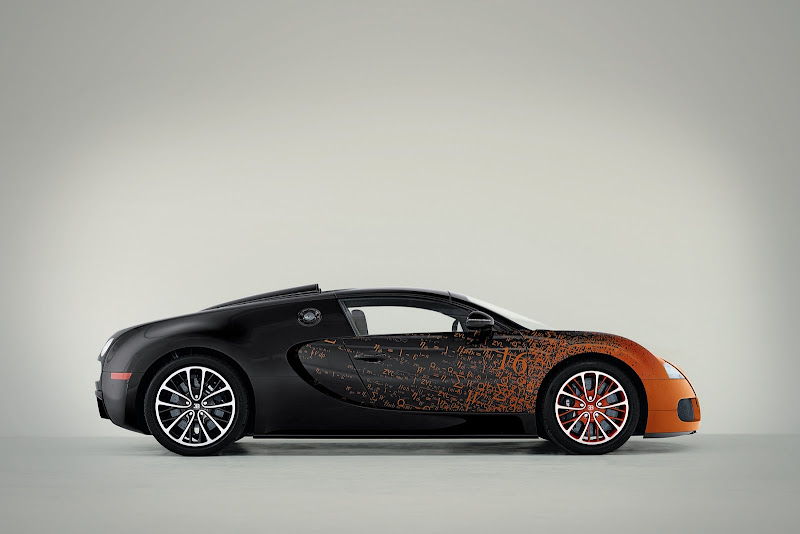 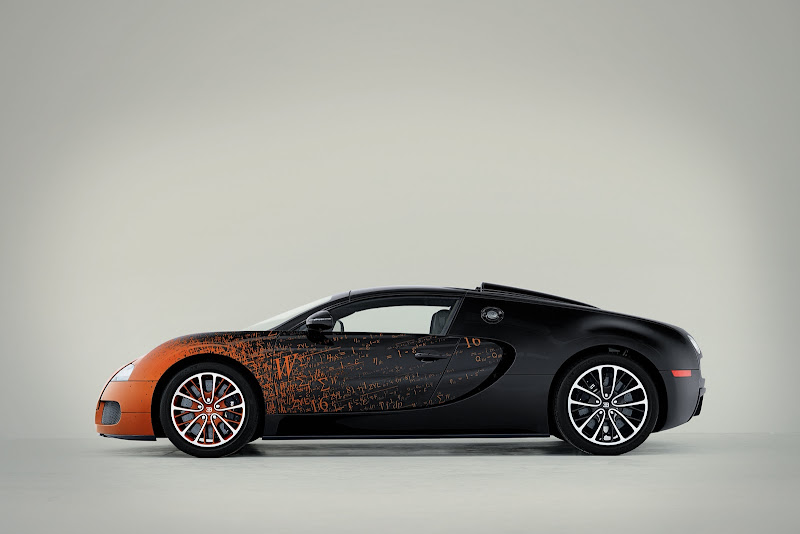 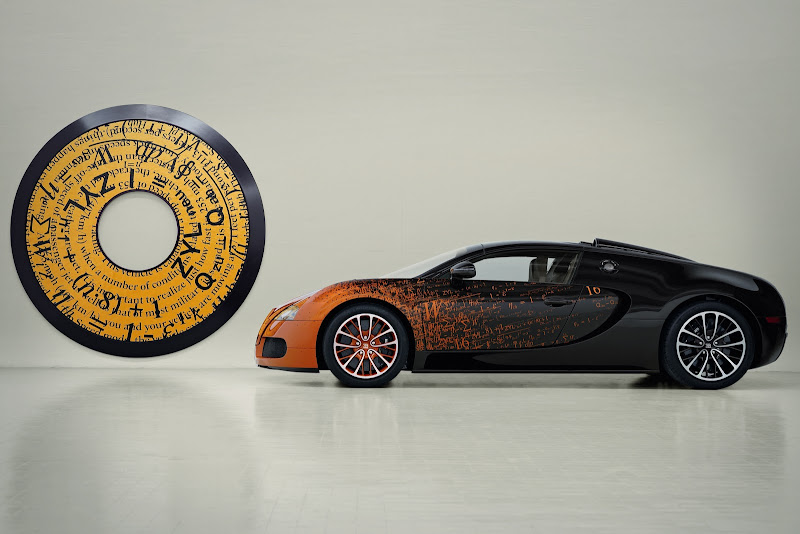 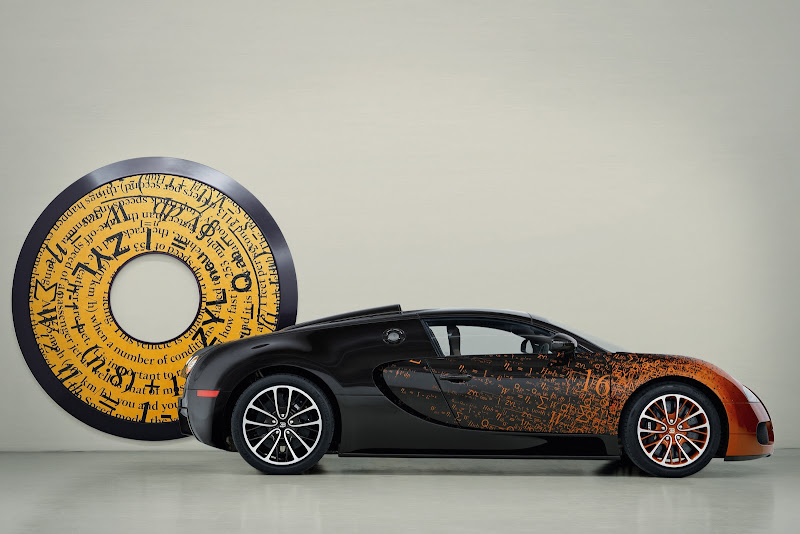 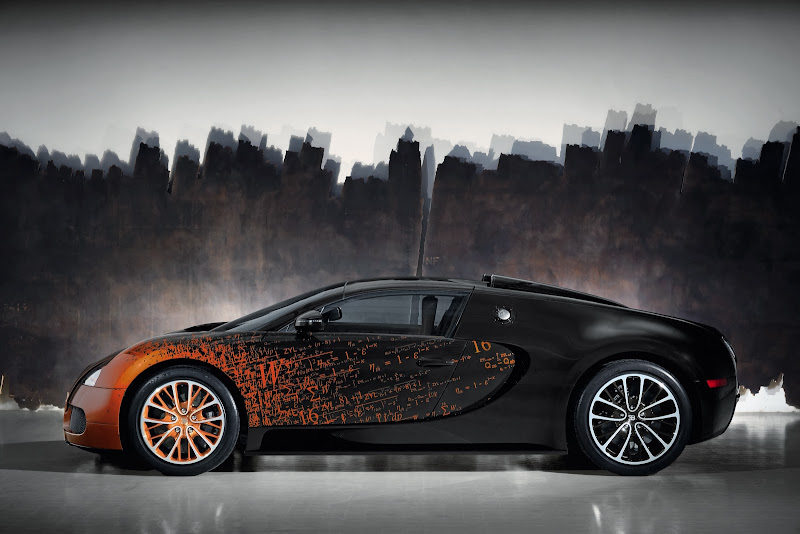 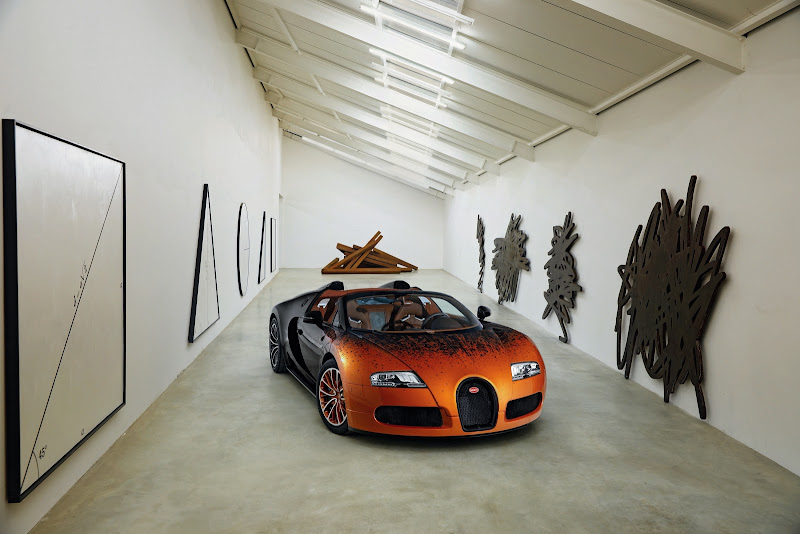 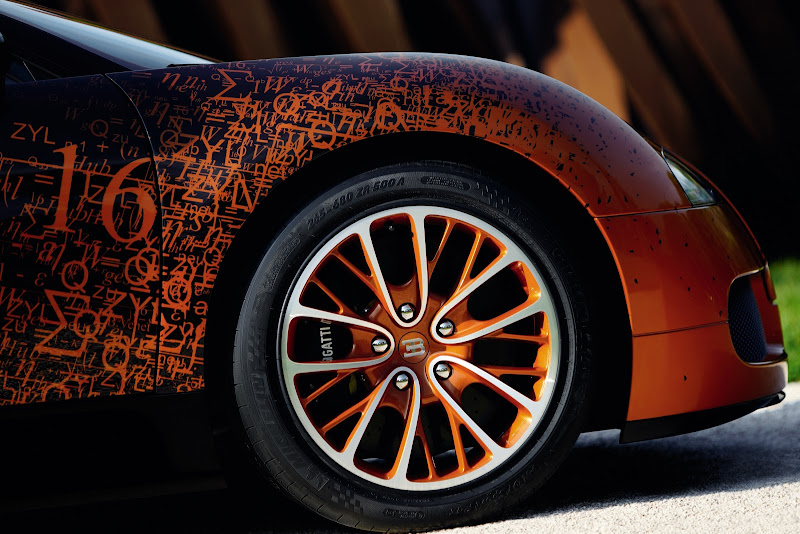 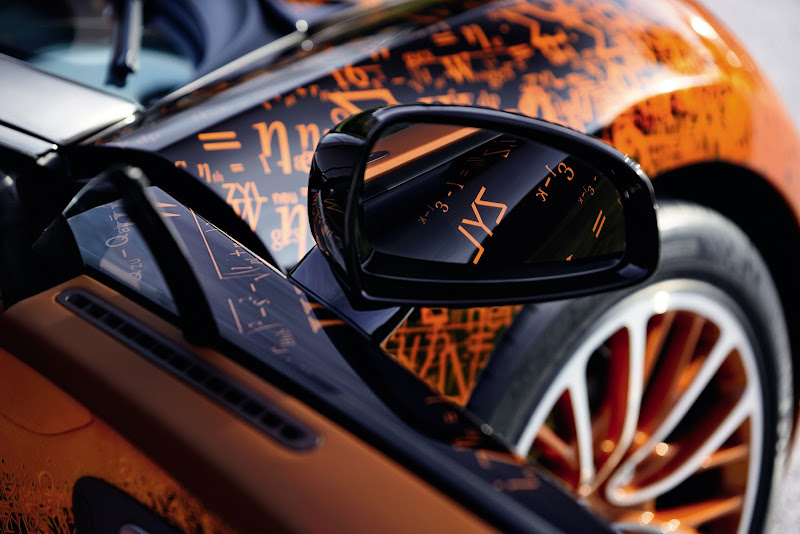 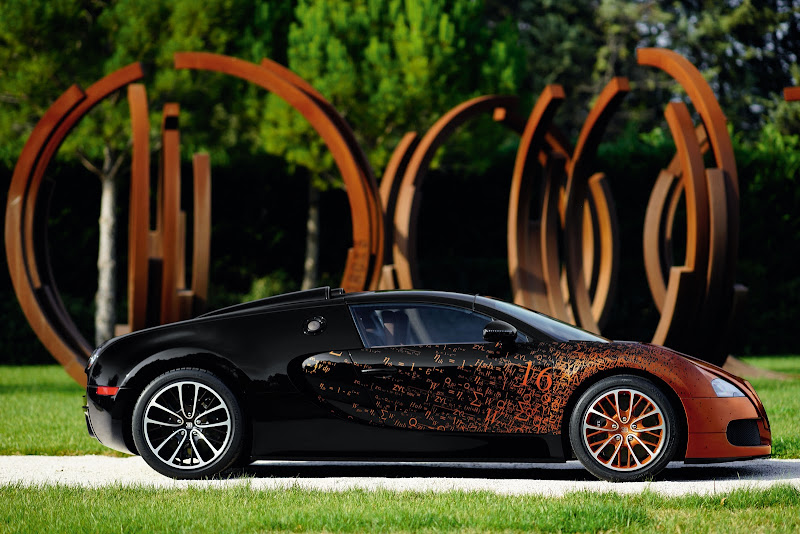 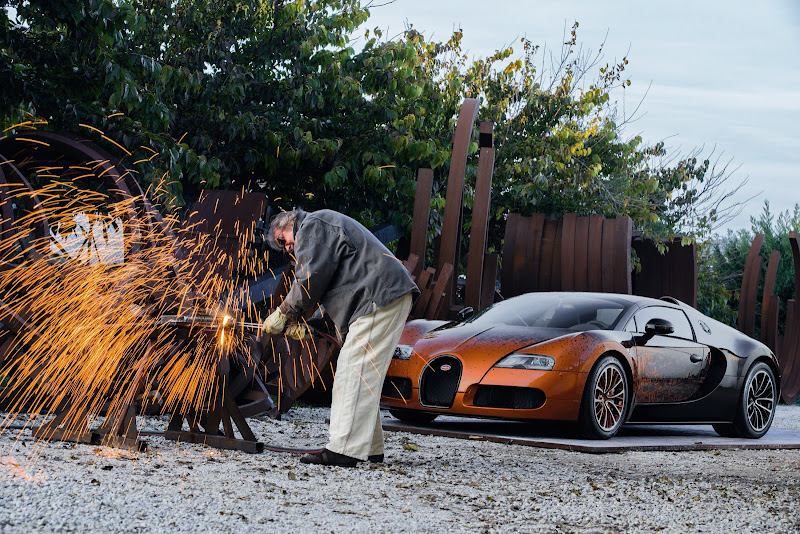 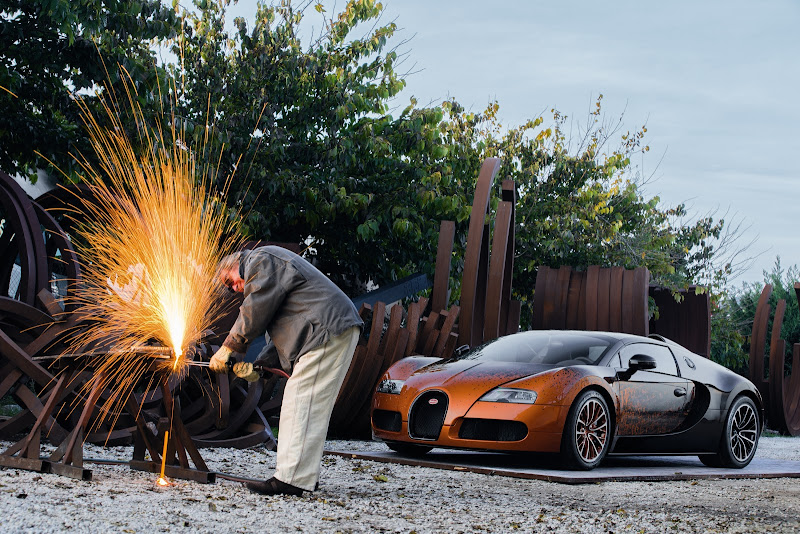 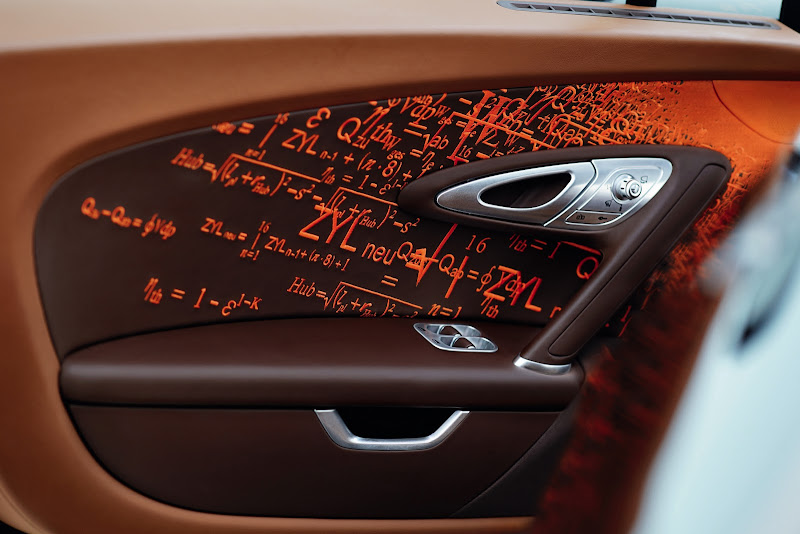 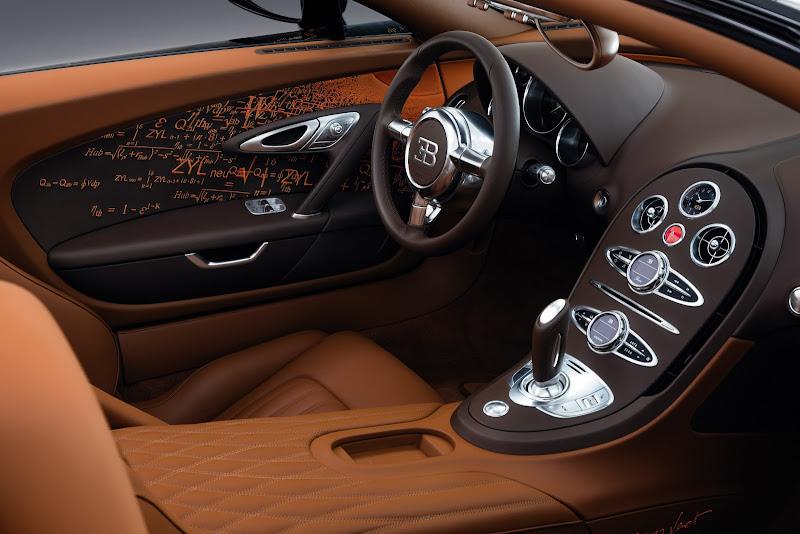 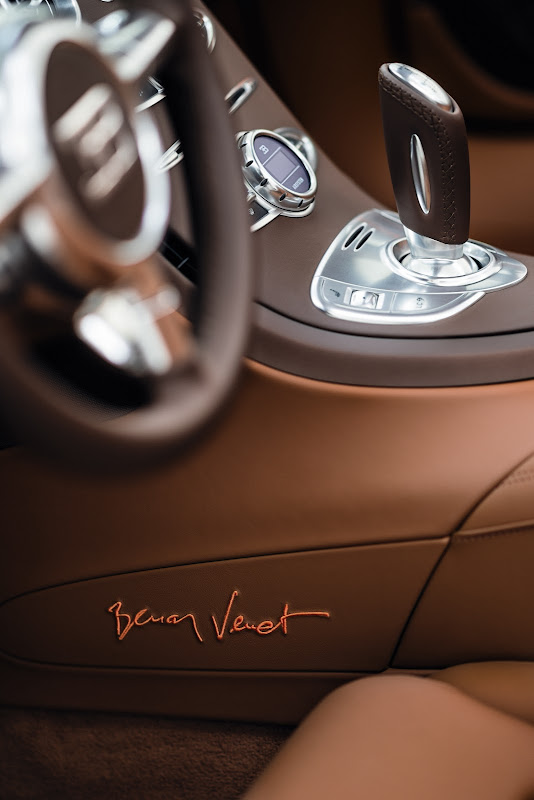 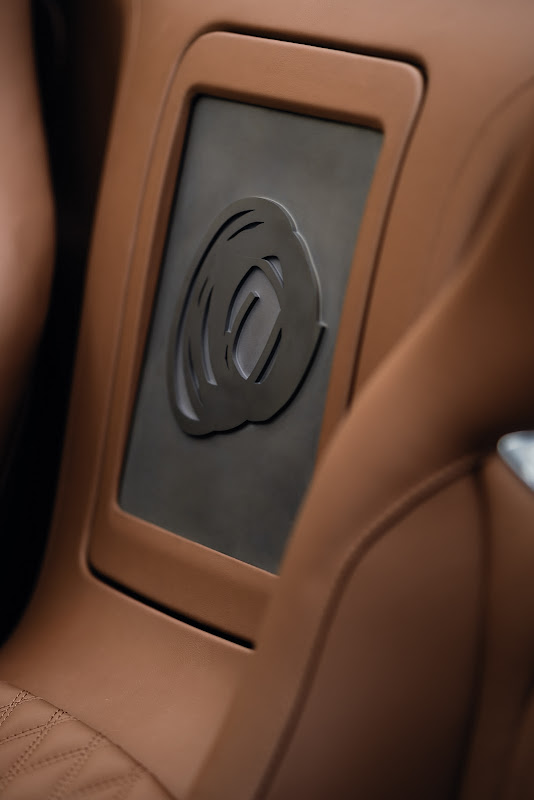 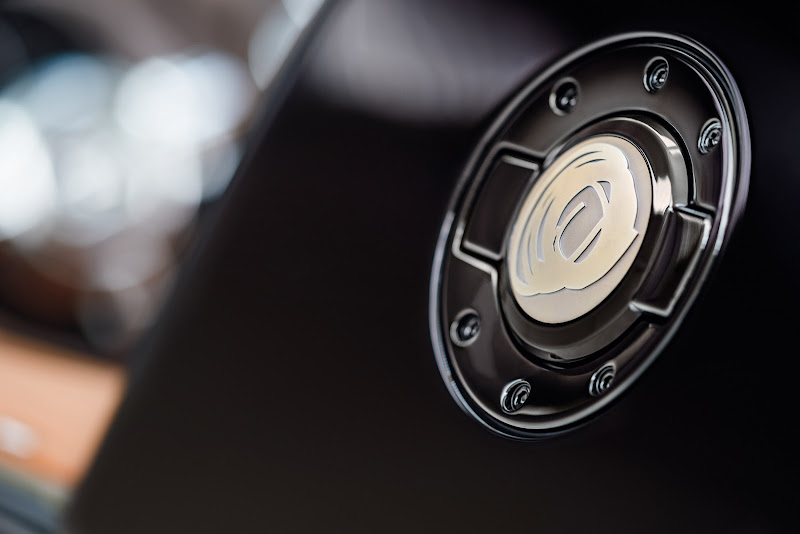 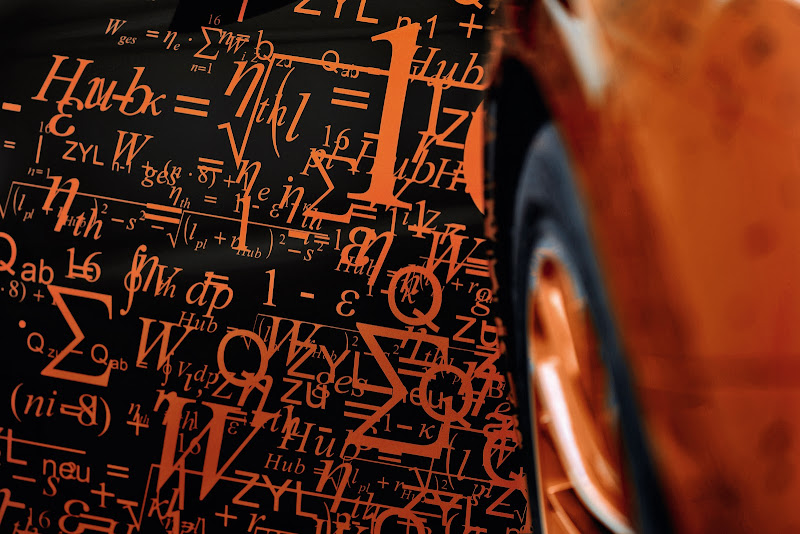 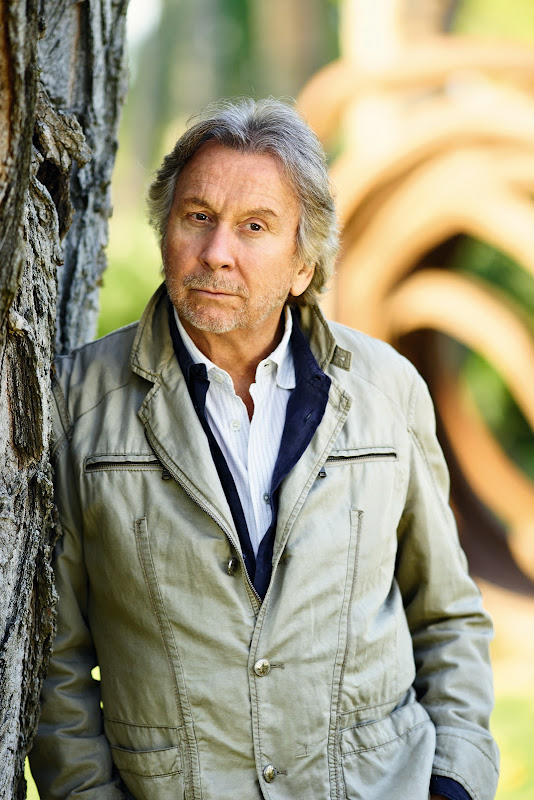 Bugatti presents the fastest artwork ever

Molsheim, France/Miami – December 3, 2012. French artist Bernar Venet has been invited by Bugatti, legendary supercar-maker, to create a work of art that combines the artist’s vision and passions with Bugatti’s celebrated Grand Sport. Through a congenial synthesis of artistic concept and technical possibilities, Venet has created an object that integrates the symbol of speed with a fascinating, painterly exterior and an interior that alludes to haute couture. This one-of-a-kind sculptural work will be on view at the Rubell Family Collection in Miami during Art Basel Miami Beach.

Bernar Venet remarks, “A Bugatti is already a work of art in itself, one that transports both its beholder and its driver into new dimensions of reality. I realized how I could translate my passion for mathematical equations and scientific treatises into three-dimensional form. My works are usually self-referential. So I found the idea of translating the equations of the Bugatti engineers onto the bodywork of the car very appealing. It was, so to speak, a logical conclusion and a new challenge in terms of the specific form of collaboration and implementation. To me, the result is also exceptional when measured by artistic standards and bestows the object with a mythical character.”

The artistic avant-gardes of the first half of the twentieth century found inspiration in the car as an object of desire; they depicted it in drawings, paintings and sculptures that projected absolute speed as their point of orientation. In the 1970s, the car served as an unconventional canvas for many artists, such as Robert Rauschenberg, Roy Lichtenstein and Andy Warhol, who painted what became known as “art cars”. This practice continued to be embraced in the 1980s.

Since the 1990s, international artists have concentrated on exploring the shifting cultural historical significance of the car. This has resulted in sculptural and conceptual responses such as those by Erwin Wurm, Gabriel Orozco, Christoph Keller, Olafur Eliasson and Damian Ortega, which tend to contextualize the car as a paradigm for the acute social and cultural changes of a globalized world.

Bernar Venet´s approach is radically different from these movements and art works. He takes on the Bugatti Grand Sport by selecting a totally original solution, which distinguishes itself from the more traditional work of his predecessors. The application of mathematical formulae calculating the enormous power of the Bugatti engine on the car itself, allows him to implement the self-referential character inherent for his paintings. In doing so he pays tribute to the genius of technological science as well as the German Know-How of automobile production.

In his 2012 artistic adaptation and exploration of the Bugatti Grand Sport Bernar Venet has combined image and object to highlight the fascination with this model’s absolute beauty and speed.

His work unites a conceptual approach and sculptural craft on equal footing. In this work for Bugatti, Venet links the Pop artists’ claim to the car as a canvas with the utilization of every technical and aesthetic means available for designing the fastest and costliest car in the world today. Venet incorporates signs taken from the realm of production into his visual idiom and creates a total work of art that harmonizes object and outer surface, interior and exterior, and evokes the exhilarating speed of the Bugatti Grand Sport.

Achim Anscheidt, Chief Designer at Bugatti, states, “Our collaboration with Bernar Venet, one of the most demanding artists of our time, has led to creative impulses and inspiration that will continue to motivate us in the fields of concept and design. We are pleased that this collaboration has resulted in the creation of a significant, collectible work of art. The self-image of the Bugatti brand derives from an artistic identity that unites sketch, drawing, technical planning and realization into an intermedial whole. Bernar Venet doubly honors our brand by making reference to the technical formulae of our engineers without fully revealing their secrets. It is an homage to the principle of dialogue and to the human capacity to question and redefine established boundaries. Venet is always focused on the essentials and so is Bugatti.”

The Rubells have a long history with the artist, and Mera Rubell notes, “Our friendship with Bernar Venet began in the mid-1970s. Our young families bonded over dinners and great conversations in his SoHo loft. The children played and the adults engaged in endless talk about contemporary art.

Don [Rubell] and Bernar have always shared an obsession with the beauty and complexities of mathematics. When we met Bernar he was already an accomplished artist and a very intuitive collector of emerging art. We benefitted from his generous insight into the artist’s perspective and his artwork has been part of our collection since the 1970s. Bernar’s life-long, signature obsession with mathematical formulas has found a ready-made canvas on the Bugatti, which is both original and dynamic. We’re proud to present the Venet/Bugatti collaboration at our Foundation’s museum.”

Born in France and based in New York, Bernar Venet is one of the most influential contemporary sculptors of our time. During the summer of 2011, Venet unveiled his monumental sculptures in a solo exhibition at the Château de Versailles in France, becoming one of only five contemporary artists to be given the honor.

From 1961 to 1963, he covered canvases in tar; his notoriety from this period was further established after his installation of a sculpture without any specific form, composed only of a Pile of Coal heaped onto the floor. Originally known for his early radical gestures, Venet moved from Nice to New York in 1966 where, over the course of the following four decades, he has continued to explore painting, poetry, film, and performance. He is known for creating abstract pieces that make reference to the language of mathematical concepts and scientific theories, bridging pure science as a subject for art and introducing the concept of “monosemy”. His capacity for intellectual abstraction 3 Bugatti and his taste for pure reason and experimentation led him to the Conceptual Art Movement of which he is one of the most prominent figures.

He represented France at the 1974 São Paulo Biennial, and also participated in the 1977 Documenta VI in Kassel. 1979 marked a turning point in Venet’s career, when he began a series of wood reliefs, Arcs, Angles, Diagonals, and created the first of his Indeterminate Lines. That same year, he was awarded an artist grant by the National Endowment for the Arts.

In 1994, Jacques Chirac, then the Mayor of Paris, invited Venet to present twelve sculptures from his Indeterminate Lines series on the Champs de Mars, which afterwards developed into a world tour in Asia, Europe, South and North America. To celebrate the establishment’s bicentennial in 2007, Bernar Venet was chosen by the French Ministry of Culture to paint the ceiling of the Palais Cambon at the Cour des Comptes in Paris. In May of 2010, President Nicolas Sarkozy inaugurated 9 Lignes obliques, a 30-meter tall sculpture to celebrate the 150th anniversary of Nice's reunification with France.

Venet is represented in many important public and private collections all over the world, including The Museum of Modern Art (New York), The Solomon R. Guggenheim Museum (New York), the Centre Pompidou (Paris), and the Museum of Contemporary Art (Los Angeles). In recent years, important retrospectives of the artist’s work have been mounted in Germany, Hungary, France, Spain and South Korea. After the 2009 Venice Biennale, where 1,200 square meters were dedicated to the installation of his steel Arcs, Venet is returning to the Biennale in 2013, this time with the intention of highlighting his works on canvas.

Venet has been the recipient of several distinguishing honors such as France’s Commandeur des Arts et des Lettres and Chevalier de la Légion d’honneur, and is also a member of the European Academy of Sciences and Arts. In 2013, Venet will be awarded the international Julio Gonzaléz Prize by the IVAM in Valencia.